Thanks to new AFB contributor Jeanette, today we'll be taking a look at some classic pictures of Publix from two different eras in their past. Jeanette has saved these classic pictures of the two Publix stores you're about to see as they documented part of her father's 40 year long career with Publix. The first of the two stores we'll get a look at is the Martin Downs Publix in Palm City. This Publix opened in 1996 as a replacement for Publix #283, located in a plaza next door. What makes the pictures of this store even more interesting is that they were taken sometime around 1996, before the store opened to the public! The interior of the store was completely finished and everything was in place, but the shelves had yet to be stocked and many of the displays were still partially wrapped in their original packaging. It's a rare look at a Publix. And it's a full Wavy Pastel store too! Let's take a look:

The produce department, still partially wrapped up. This department is located in the back left corner of this store. The signs with the black patches on the bottom were chalkboards that had yet to be written on with featured prices. Gotta love that Wavy Pastel though.

Looking out from the produce department toward the front of the store, where I believe the pharmacy is located. In the background, you can see boxes of product ready to be placed on the empty shelves in preparation for the grand opening. 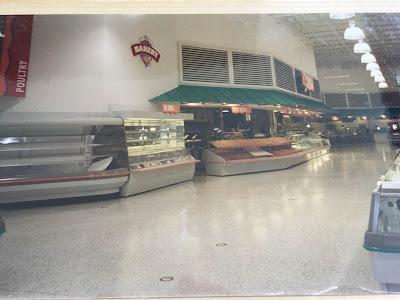 A nice view of the Wavy Pastel bakery over on the right side of the store. It's so weird seeing this store perfectly set, but with nothing on the shelves or displays. The deli is located in the alcove in the background. 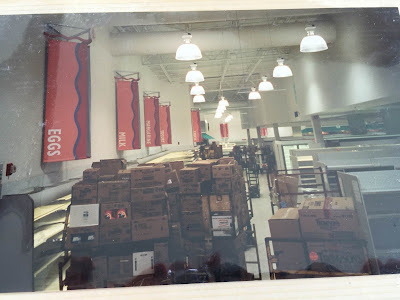 The back wall, home to the dairy department and its Wavy Pastel category markers, which were actually more like banners. More boxes of product to go out in this picture as well, including a very obvious case of Tide detergent! 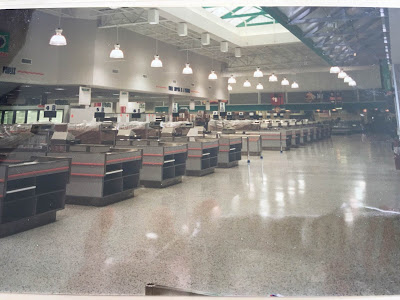 The massive front end, placed under the large skylight. The older style Publix registers are installed, but still wrapped in plastic. From what I can see, I count 14 registers total plus the two express lanes. These late 90's stores had massive front ends. Even the highest volume modern Publix won't have any more than 10 registers plus two express lanes. Most of these 90's stores have had their number of registers reduced since then to 8 or9 (not counting express), freeing up the extra space to display more sale and seasonal items in. You can also see the deli in the background. And if you zoom into this picture, under the drop ceiling portion behind the registers, you can see the old style aisle signs I was trying to describe (incorrectly) in the previous Publix Wavy Pastel interior post. 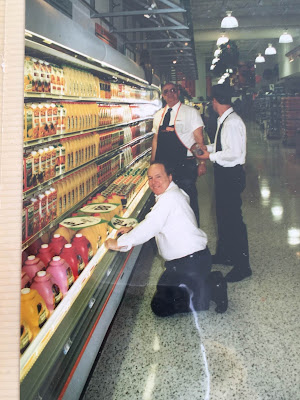 And to wrap up this little tour of the Palm City Publix from 1996, Jeanette included this picture of her father, John (the one kneeling against the juice display). Her father was the Produce Manager at this store when it first opened. It looks like he's putting the final touches on his department right before this store's big grand opening celebration.

As for the current status of store #577, just about everything except the interior decor looks exactly the same. The facade still looks like it did when the store first opened in 1996, although it's now painted brown. The current interior is either 2nd or 3rd Generation Classy Market (I couldn't tell for sure in the few pictures I was able to find of the interior), but the layout is still the same from when the store first opened. Publix usually doesn't touch the floorplan much when they do an interior remodel (unless it's an extreme case where they close the entire store for a few months to do the remodel).

Now for some pictures of the second store Jeanette sent in photos of - back to an era before Wavy Pastel came into existence...

Below are some pictures of the interior of former Publix #75, located in Hollywood, FL, taken back in 1979. Like with most stores, there aren't too many interior pictures of Publix floating around online taken prior to the 90's, so this will be a very special treat. This Publix originally opened as a Wing style Publix in 1962. By the late 90's, the aging old Publix was replaced by a new store located a few hundred feet to the left of the original one (which you can see in the picture above). Currently, Publix #75 is divided between a Bealls Outlet and Rent-A-Center. However, let's go back to 1979 to take a quick glimpse at the original Publix: 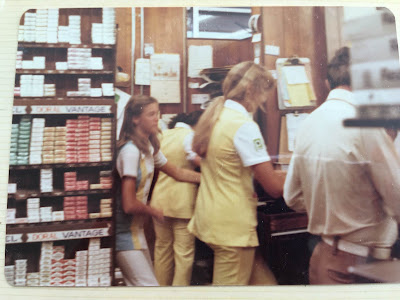 I believe this picture was taken in a back office of the Publix (although the cigarette display is throwing me off as to the exact location). Regardless of the location, you can see the two ladies in this picture wearing the old yellow Publix cashier's uniforms. 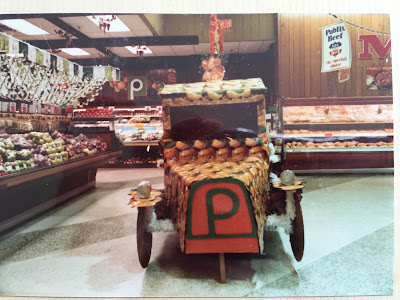 And now for a little bit of the sales floor. While the above picture and the following one were taken primarily of the car shaped citrus display, you can still see the old 70's decor in the background. In these pictures, we'll get a quick look at the decor in the Produce and Meats departments. 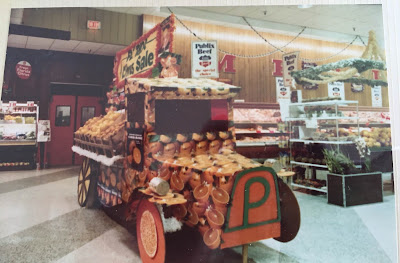 Nothing goes better together than avocado green and natural wood paneling, right? Supermarket decor from the 70's has a unique charm to it that just can't be replicated. I also like the creative display for the citrus that they built.

Thank you Jeanette for taking us on this little trip through Publix history! I hope everyone liked our look at these classic Publix stores. More Albertsons coming next week, so stick around!