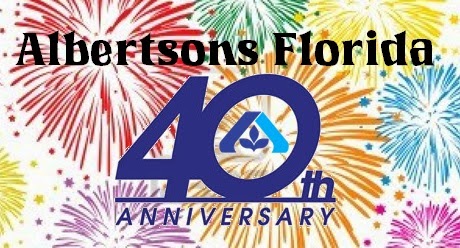 October 2014 marks the 40th anniversary of Albertsons entering Florida. For this month's featured post I decided to do something in Albertsons Florida's home territory of Pinellas County, where the two of the first four Albertsons Florida stores opened in late 1974. When Albertsons first decided to enter the Florida market in early 1974, they announced they were going to open four new stores in Clearwater (#4301), St. Petersburg (#4302, 4th St. N.), Winter Park (#4303), and Altamonte Springs (#4304). However, unknown to most, Albertsons was actually planning to open 5 stores during their initial Florida push. This post is dedicated to that long forgotten and mysterious fifth store that was never built.

The fifth Albertsons Florida store was planned to be built at the corner of 9th St. N. (also referred to as Dr. Martin Luther King St. N.) and 94th Ave. N. at the northernmost reaches of St. Petersburg, near the Gandy Bridge. This satellite image above is of that intersection in 1969. By the time Albertsons would have came along, a Kmart store had already been built at the northwest corner of this intersection.

And this is where the mystery comes in. The pending construction of this store was mentioned in a February 12, 1974 article of The Evening Independent, The St. Petersburg Times former evening edition. The article talked about Albertsons' big push into Florida and the other new stores that were being built in the area (along with all the wonderful features Albertsons would bring to Florida). This article is the only reference online or anywhere to the 9th and 94th Albertsons ever existing, however details in the article were quite vague about this store. The only other known information on this store was that construction was to start in the summer of 1974, although that never was to be. I'm not even sure which of the two available corners was supposed to be the one this store was to be built on (it could have been either the northeast or southwest corner, however I'm leaning toward the southwest corner due to the shape of the lot and the fact it looks like there were some wetlands on the northeast corner).

I wonder why this store was never constructed in the first place. Did locals not want it? Was zoning or some other government agency giving Albertsons a hard time? Could Albertsons have been trying to build over those wetlands on the northeast corner, which upset environmentalists? Due to how long ago the plans for this store were scrapped, information on it is hard to come by. Both of the potential sites were later developed as something else though. The northeast corner is now home to a hotel and office buildings, and the southwest corner is now a community of apartment complexes, which you can see below.

After the plans for this store were mysteriously scrapped, Albertsons never pursued building another store in this area. The Pinellas Park Albertsons (#4349), which wouldn't open until 1982 about 3.5 miles west on Gandy Boulevard, was to become the closest Albertsons to this site.

As always, if anyone can add any information to the history of this planned store, please feel free to leave a comment below.