A Loss for Winn-Dixie in Gainesville 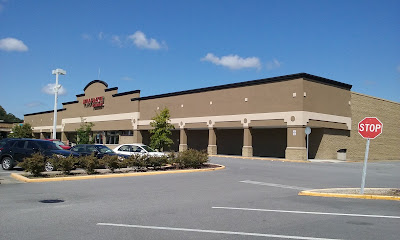 ***Photos for this post are courtesy of contributor Ian W.***

Winn-Dixie has had image issues for years. People always complain about many of Winn-Dixie's stores being old, dirty, smelly, stuck in 1990, etc. Ever since emerging from their bankruptcy, Winn-Dixie has come up with a few classy prototypes that have turned what were once old, dated stores into something very presentable, something that could turn all of those previous thoughts and perceptions about Winn-Dixie completely around. Some of Winn-Dixie's most ambitious remodeling campaigns included the 2011-2013 "Transformational Stores", and their most recent remodeling campaign introduced earlier this year for the rollout of the "Down Down" promotion. Amongst all of these high hopes, fancy prototypes, and promises for more widespread store remodeling, Winn-Dixie's post-bankruptcy financial burdens still haunt them, and so does that long ingrained image of the condition of their stores from the early 2000's. Most of Winn-Dixie's current image issues stem from the fact that they don't have the money to do elaborate remodels to all of their stores, leaving the vast majority of their store base untouched since the early 2000's (or in many other instances, decades prior to that). This store was one of the worst offenders to prolonging Winn-Dixie's image issues. This store really hasn't been touched on the inside since the late 80's. As we will soon see, this store was probably the very last Winn-Dixie in existence to still be sporting Winn-Dixie's 80's Neon interior. According to Ian, this store was Gainesville's dirtiest and most unpleasant Winn-Dixie, and other locals seem to agree on that front as well. According to one review of this store, written by a Winn-Dixie employee sent here from another store to help out, had this to say about ole 160: "This store is known in Winn-Dixieland as "Store #160," and even the mention of the store's number leaves many W/D employees shuddering as it's known to be one of the worst Winn-Dixies in the entire state of Florida. It's called "the store that care forgot."" (You can read that entire review by clicking here and scrolling down to the review written on 3/31/2009).


This Winn-Dixie originally opened in 1977, and was remodeled in the late 80's to its current interior. Winn-Dixie expanded the building to the left into what looks like a former drugstore in 1992, leaving most of the 80's interior intact in the original portion of the building, and adding a multicolor stripe around the perimeter of the entire store to tie everything together. As the 2000's progressed and Winn-Dixie emerged from bankruptcy, Winn-Dixie considered relocating this store to a new building, although those plans fell through when the shopping center's landlord agreed to fix up the exterior of the plaza and resolve some parking issues that needed to be addressed. Even after the relocation plans fell through, Winn-Dixie put this store on its list to be given an elaborate remodel into one of their "Transformational" stores. However, that remodel never happened due to BI-LO's buyout of Winn-Dixie in 2012, killing all hopes of a remodel here. In its final years, this store just withered away as a grocery box still clinging onto the 80's. This store began the closing process on September 7, 2016, and closed for good in early October 2016. Also to note, a Winn-Dixie store in Winter Park, FL (7580 University Boulevard) also began its closing at the same time, making that store and this one in Gainesville their most recent casualties. Anyway, with that long backstory out of the way, let's get to the good stuff and take a look at what was going on inside... 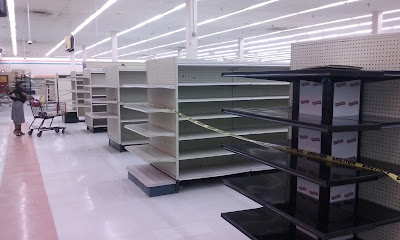 Ian took these pictures fairly late in the closing process, sometime in late September 2016. As we'll see in most of these pictures, there wasn't much left in the store at this point. These first two photos are of some of the barren grocery aisles... 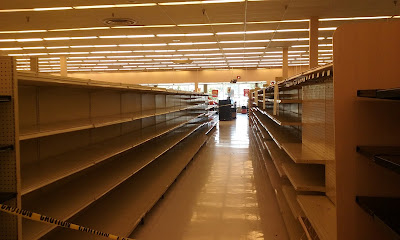 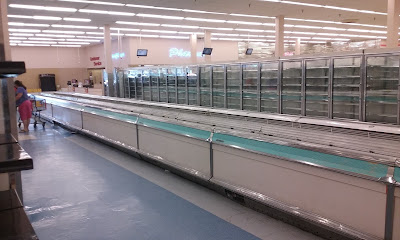 Heading over to frozen foods now. I think it would be a pretty safe guess to assume that all of these coolers are original to when this store opened in 1977. The coffin cases are throwing off an especially 70's vibe. In the background you can see the 80's Neon "Pharmacy" sign. As hopelessly dated as many of Winn-Dixie's stores are, I always thought that Winn-Dixie had killed off this interior during the Purple/Maroon remodel sweep of the early 2000's. The 80's Neon interior was retired in 1986 after Winn-Dixie introduced the Marketplace interior that same year. Also to note, the colored floor tiles you'll see throughout the store are from Winn-Dixie's 70's interior, like the blue in the frozen foods aisles. Many older Winn-Dixies still retain the colorful 70's tiles to this day. 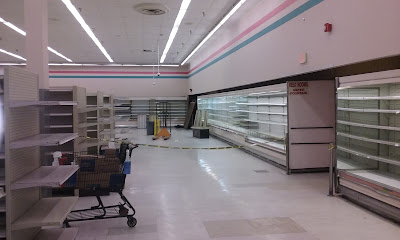 Looking into the left side of the store. This picture was taken looking into the space that was added on during the 1992 expansion. During that time, the pastel stripe you see was added around the back and side walls of this store. The stripe matches the color scheme of the Marketplace decor used at the time. 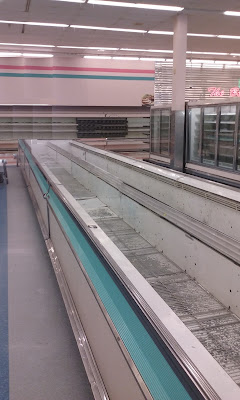 A look toward the back wall from the frozen foods department. And what's that I see in the background?... 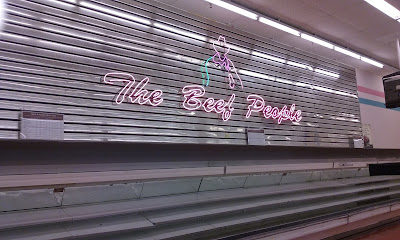 Before finishing, I have these Bird's Eye aerial images courtesy of Bing Maps to share for a little more perspective on this store: 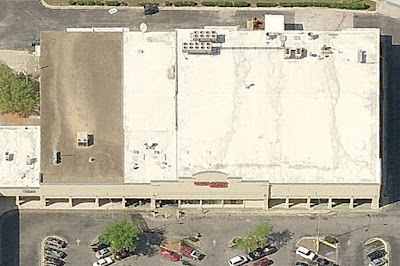 This is an overview of the Winn-Dixie building. The part of the store with the darker roof was the space Winn-Dixie expanded into in 1992.

And finally, I figured I'd throw in this aerial image of this other former anchor to Northside Shopping Center, Kmart. This Kmart opened in 1977, and relocated in 1994 to the site of the former Gainesville Mall (where the Lowe's currently is on 13th St. - also, if you want to know more about the old Gainesville Mall, you can read an interesting article that mentions the old Gainesville Mall and other classic Gainesville area retail here). After Kmart left the Northside Shopping Center, their space was divided between an Ashely Furniture Homestore and Big Lots. Since this image was taken, Big Lots relocated to a new home over on 13th St., and the Ashley furniture store closed. Currently, the only occupied portion of the former Kmart is right third of the building, where a Harbor Freight Tools and a pawn shop recently moved in. Throw in the now closed Winn-Dixie, and this plaza will be pretty empty. However, 13th St. seems to be the go-to place for retail in northern Gainesville now, as that area has seen some growth recently, and empty spaces getting filled fast.

With the closing of the Northside Shopping Center Winn-Dixie, that leaves Gainesville with only two Winn-Dixies remaining, both on the south side of town (one of which is a former Sweetbay, and the other is a very old store remodeled around 2011 to the post-bankruptcy interior). Winn-Dixie's two remaining Gainesville stores are nothing compared to Publix's 13 Gainesville locations (with a 14th location currently under construction). I know Florida as a whole is very biased toward Publix, but what's going on in Gainesville is a bit crazy...

Anyway, that's all I have for now. Thanks again Ian for sending in these pictures! Be sure to come back next Sunday for the regularly scheduled feature post!