Bring Safeway Right to Your Door!

AFB contributor Dave M. has sent in a few more pictures from the Largo Safeway. One of the recent developments was the removal of most of the scaffolding from the front of the building, revealing what they've been doing back there for the last few months. It looks like all they did was stucco over some of the brickwork where they will be placing the new signage. I figured stucco work/somehow covering over the brick was probably what was happening back there, as I didn't think they were going to do an entire re-do of the exterior. Other than the stucco, the exterior is still of the same design as it has been since the store was built.

In other news from the Largo store, Dave also saw this new feature Safeway will be offering at this store that I wasn't aware about: 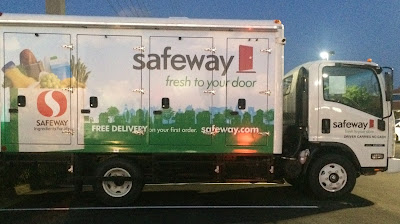 Safeway will be launching their Safeway "fresh to your door" grocery delivery service at the Largo store. Safeway purchased (from what I can tell by the pictures) at least five of these trucks to fulfill the grocery orders from this store, so they must be expecting this service to be pretty popular. Right now, Safeway will be the only grocery store offering home delivery service in the Tampa Bay area. Publix has experimented with at home grocery deliveries a few times in the past, however they've never been able to find a system that works for them. Right now Publix is experimenting with grocery delivery in select markets by subcontracting the service through the company Shipt, which seems to be Publix's most successful attempt at grocery delivery so far. I don't know if Altamonte Springs and Oakland Park will be offering this service as well. 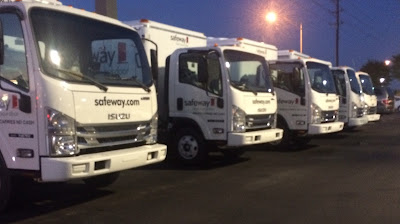 Here you can see the fleet of grocery delivery trucks parked in front of the store. So if your tired of Publix and want a Safeway fix instead, but don't want to drive halfway across the state to shop there, here's your answer! Well, they probably won't go that far to deliver groceries, but this service will be another way to give Safeway a slight edge over Publix for the time being.

Thanks again Dave for your continuous coverage of this store! I have a new store post going up tomorrow, so be sure to come back and check that out!