Here it is! The new and improved Clearwater Albertsons post. And a big thanks to all who sent in pictures of this store!

After over 40 years in business, the original Florida Albertsons in Clearwater served its last shoppers today, May 30, 2015, two days later than originally planned (the original predicted final day was May 28th). For now, the future of this site is unknown. However, contributors David C. and Ross T. kindly sent in to us some photos of the interior and exterior of this store, including the one above, for your viewing pleasure:


As you'll see in the following pictures, this store is really beginning to show its age. Now that I really think about it, I feel this store's closing had more to do with the fact it would cost Albertsons too much money to update this store, and that it would be more cost effective to just close it and put the money into updating the other three stores, which Albertsons announced they would do in the days following the announcement of this store's closure. And I'm sure that new Walmart across the street didn't help business much here either.

What looks like funny looking texturing along the front of the store are actually painted over windows, which was probably done as a way to increase sales space. Those old windows were painted gray until recently (as can be seen in the aerials below).


And heading around to the right side of the building. The entrance to the liquor store is under the liquor sign, tucked into the alcove, and that's a side entrance into the store just to the left of that.

Looking back toward the liquor store.
The Albertsons sign on the east side of the building facing Belcher Road. It looks like some of the letters were replaced over time, since the l and the n don't match the others.

Now let's go inside to take a closer look at the unique interior. While this store had the standard Blue and Gray Market interior for many years, it was transformed into the "Yellow and Green Market" interior in 2006, according to commentor Mark P. over on my original post announcing this store's closure. He informed us that this new paint scheme was supposed to resemble the color scheme Publix was using in their stores at the time. It's pretty close to the color scheme of Publix's 1st Generation Classy Market interior, and I think this color scheme compliments this decor pretty well. Now for the pictures:

First stop is the back left corner of the store, home to the bakery (which is actually stuffed into the corner) and the deli, which is to the left of the bakery along the side wall. All but one of these interior photos you're about to see were taken on May 27th and May 28th, not long before the store was completely cleaned out. Here the bakery and deli are blocked off by these tables of random knickknacks, looking mostly like decorative floral leftovers. I remember when my old Albertsons was closing, the bakery, and just about all of the service departments actually, were still fully functional until only a week or two before the very end.

The former pastry cases all cleaned out. It doesn't seem like this store had a very big bakery, since most of this "Bakery Shop" corner was actually home to the deli!


And there's the deli in the background, also all cleaned out. This photo was taken from produce, which was also located in the back left corner of the store. That's a pretty sizable amount of produce left for this late into the closure.

The deli signage under the bakery awning.

Heading over to dairy and lunch meats, all the cases are now covered over as the merchandise is depleted. The Seafood and Meats service counter is in the background, also closed now. Those windows above the Seafood and Meats signs are for management's offices. After the Skaggs model Albertsons stores are retired in the early 80's in favor of the Superstore model stores, these windows are moved to overlook the front of the store instead of the back.

The closed Seafood and Meats counter, along with an empty aisle.


Closeup of one of the aisle markers. I've never seen this style aisle marker before. Albertsons current interior uses ones that look like this. My guess is that these were probably put in around 2006 when the rest of the store was repainted, because the original blue ones would have looked really out of place in the new sea of green and yellow.


The center aisle that runs down the middle of the store. This photo also gives us a good look at the original Blue and Gray Market flooring pattern.


Heading over to the back right corner of the store where Health and Beauty and the pharmacy were located. This store topped out at 16 aisles.


Health and Beauty signage along the right side wall.

This photo of the pharmacy, and a very well stocked store, was taken back at the end of April. According to David C., the pharmacy was shut down just days after this photo was taken at the beginning of the closure and the Pharmacy sign removed promptly after that.

Jumping back up to the front of the store for a quick look at the customer service counter, and it's sign, which looks to be from the Theme Park/Grocery Palace interior.That sign probably came from another closed store in the area. It's hard to see, but in the green part of the wall above the counter is a labelscar that reads "Film and Developing", as noted by David C.


The front end. 11 registers total, and it looks like there were 3 open on this day. The side entrance into the store is in the far left background.

At least they have the word Albertsons for the thank you sign over the front entrance.


And a quick look at the front vestibule before we leave this store for good.

And finally the parking lot sign facing Gulf to Bay Boulevard, which in 24 hours, will probably be painted over in black.

Let's do some aerials to finish out this post:

First up, historic aerials courtesy of Google Earth and HistoricAerials.com: 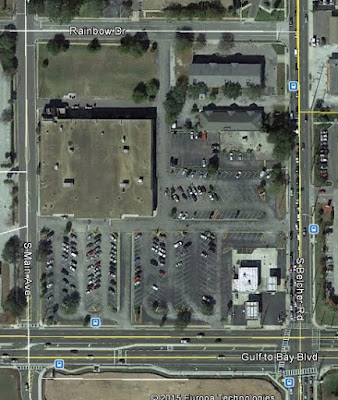 Albertsons #4301 - 2014 - Not a bad crowd in the parking lot, and this image was taken after the new Walmart Neighborhood Market across the street opened. 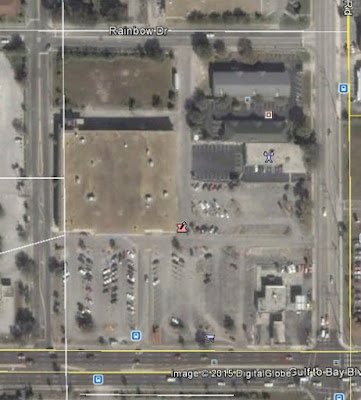 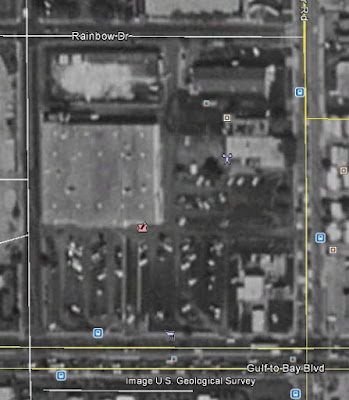 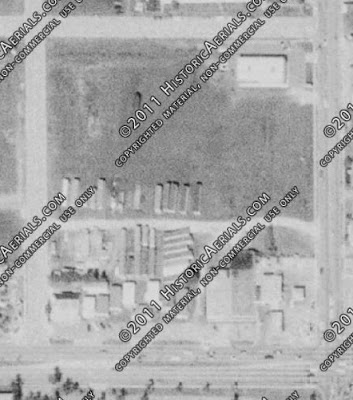 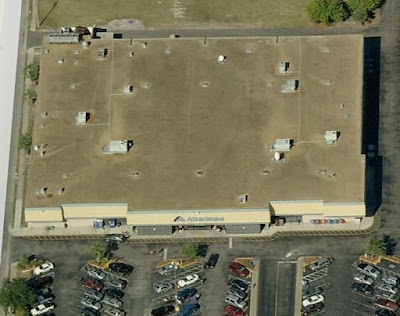 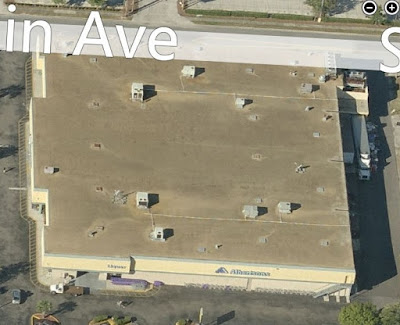 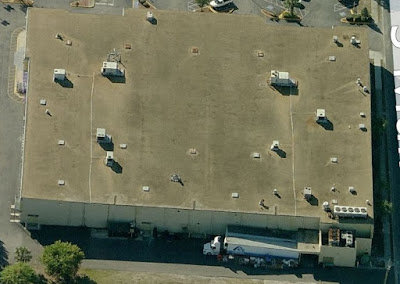 Back, complete with Albertsons truck unloading. 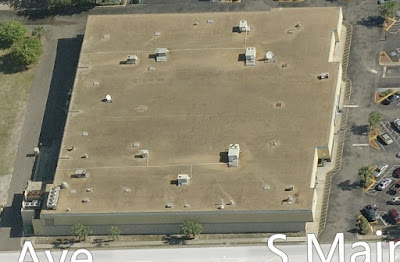 UPDATE 5/31/2015: I found this video on YouTube that features some interior and exterior views of this Albertsons, taken back in 2013. The part with Albertsons goes from a few seconds after the beginning until approx. 3:30:

Well Clearwater, you had a good run. You lasted over 40 years and made it to the Final Four. Not many stores make it that long, especially in a chain that's been fighting a losing battle for 15 years now in Florida. I wish all the employees at this store the best, and I hope everybody enjoyed this new extended look at the closing of the Clearwater Albertsons.