As I'm sure you're all aware, SEG announced the closure of 22 of their stores throughout the Southeast back in February. Among those 22 stores that were announced to close, one of them was a vary special Winn-Dixie location - that location being this particular one in western Kissimmee. Located in the shadows of Walt Disney World, this unique Winn-Dixie had a custom designed Chinese-inspired decor, a vestige of this building's days as a Gooding's as well as a reminder of the long-gone Splendid China theme park once located behind this shopping center. However, more detail on the history of this plaza can be found in my original post about this store, which you can read here. 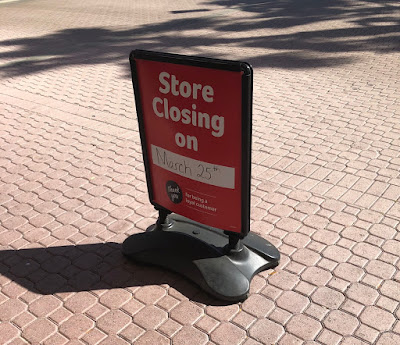 Since I was unable to make it out to this store's closing due to a scheduling conflict on the day I had planned to journey out this way, the photos you'll be seeing today were taken by AFB contributor Reviewer Jay. Reviewer Jay took the photos you'll be seeing in early March 2019, only two or so weeks into the closing. The above photo was a signboard located on the store's front walkway, announcing the store's last day in business. Since the merchandise at this location sold through rather fast, this Winn-Dixie actually closed on March 23, 2019 instead of the originally planned date of March 25th (as seen on the sign above). 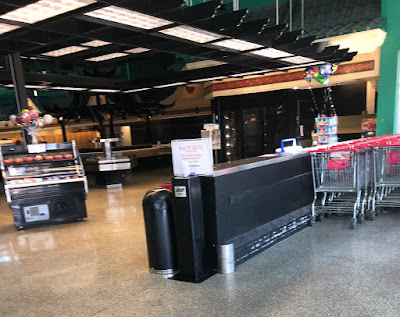 Stepping through the front doors, here's a peek to the right. The area above was home to Winn-Dixie's fresh departments, including the deli and a small bakery. We'll see some more from this part of the store in just a moment, although it was pretty barren at this point in the closing. 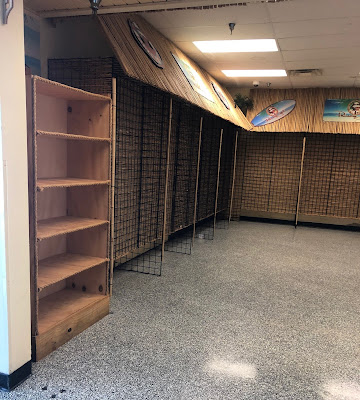 The souvenir shop is empty. This section of the store you see above was located inside this pagoda. 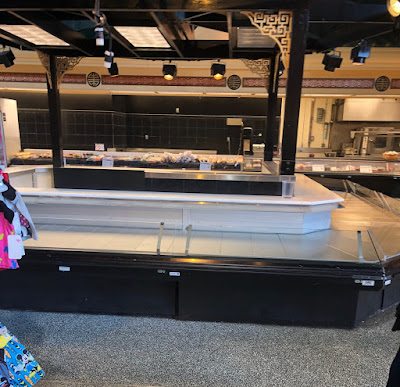 Stepping back into the fresh departments, here's a look at the pagoda-themed island Winn-Dixie used for prepackaged deli and bakery items. According to Reviewer Jay, this island was originally Gooding's cheese shop. 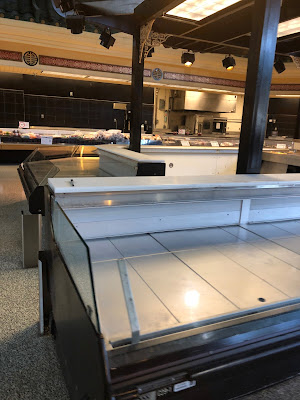 More of the former cheese shop island, with the deli counter in the background. 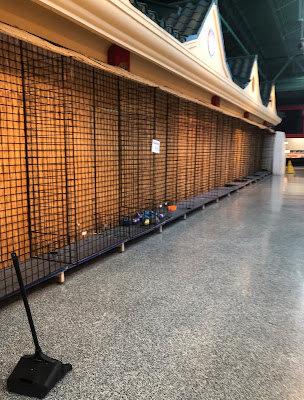 Behind this wall, which lines the left side of the grand aisle for the fresh departments, lies the mysterious abandoned Chinese restaurant. From what I have been told, behind those pegboards remains a fully furnished restaurant, complete with tables, kitchen equipment, and a menu board, all left frozen in time from the Gooding's days. 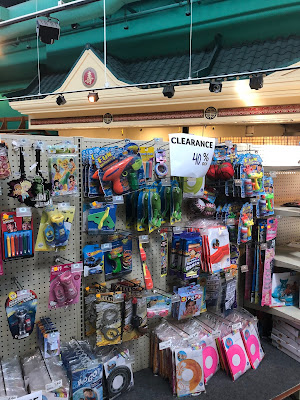 There weren't many fresh products left by this point in the closing, so what merchandise remained in this part of the store was mostly toys and souvenirs. In the background we can see the old bakery department, located on the right side wall between the deli counter and produce. 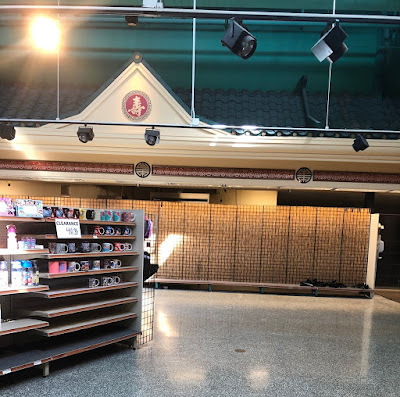 On the same island as the old Chinese restaurant, we also find Gooding's old in-store pharmacy department peeking out from behind those pegboards. I don't think Winn-Dixie ever operated the pharmacy at this store, but either way, the pharmacy has be closed off for a very long time. 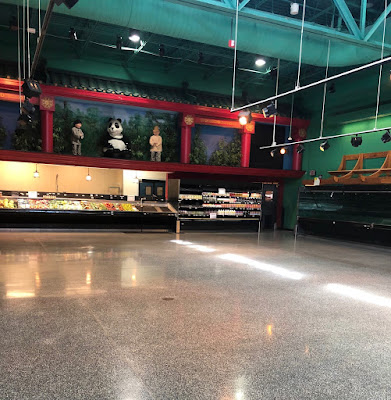 Mostly emptiness in the produce department. The old produce displays have been cleared out, and what little produce remained was relocated into the cooler in front of the produce prep counter. 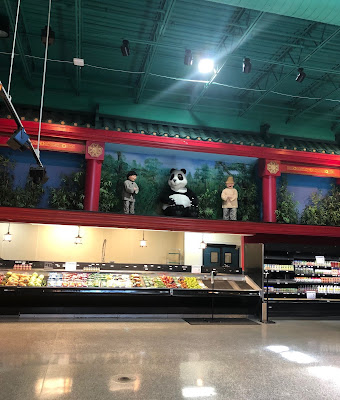 Mr. Panda Bear and his friends won't have much to look over anymore as this store clears out. It's going to be lonely up there until something happens to this place, or someone comes to rescue these guys from getting tossed into the dumpster... 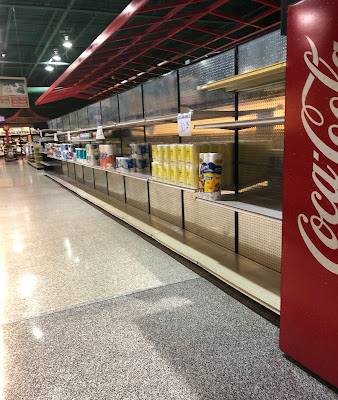 Only two weeks or so into the closing when Reviewer Jay took these photos, this store was quite devoid of merchandise. This is a look down one of the grocery aisles, where you can see just how little was left in this place. 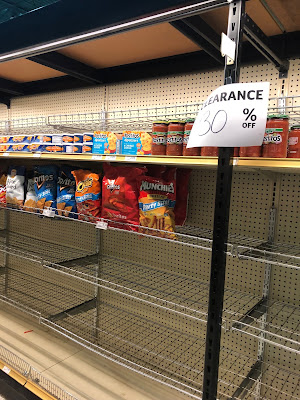 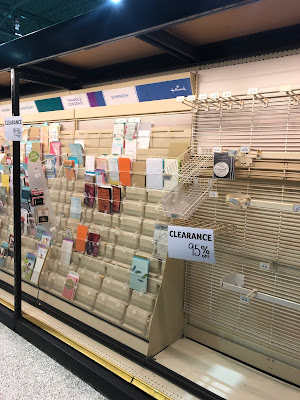 95% off greeting cards, a discount that was raised to 98% off as this store neared its final days (one of the most generous closing discounts I've ever seen - they might as well have given these cards away at that point!). Greeting cards seem to be one of the hardest things to get rid of during a liquidation sale, as I've seen so many cards left over on a store's last day. 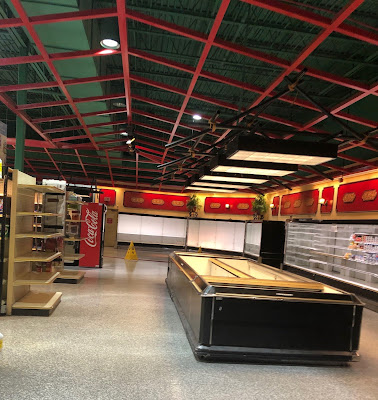 Here's a look across the back of the store, where the coolers were being emptied out, shut off, and disassembled. 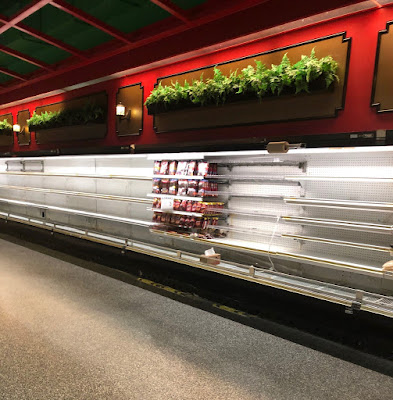 Not much merchandise left to see here... 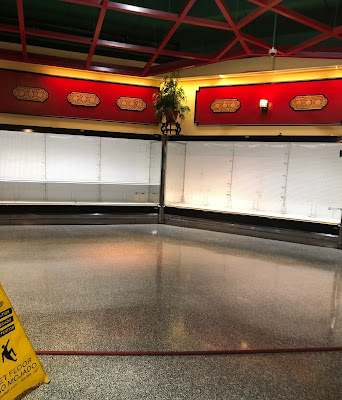 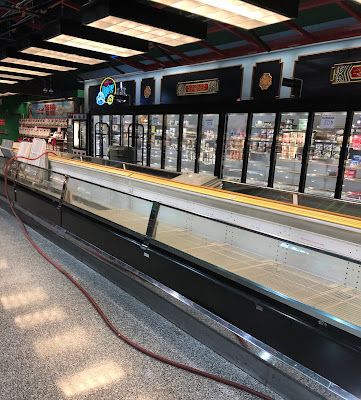 The final photo from Reviewer Jay's batch takes us to the frozen food department, which lines the left side of this store. The ice cream in those coolers seems to be one of the most plentiful items remaining in this place!

To finish off this post, here's a video duckman66 brought to my attention. This video was posted to YouTube about 3-4 days before this store closed for good, posted by Youtuber TheDailyWoo (no relation to YonWooRetail2 from flickr). The video provides a nice little tour of this store as it entered its final days, showcasing the funky decor and yet more emptiness.

So what made Winn-Dixie close this unique store you ask? I don't have a concrete reason, but talking to some others I've been presented with the following information: According to a store employee Reviewer Jay spoke with during one of his visits to this store, this store was chosen to close because the owners of the shopping center (who are still the original developers of the plaza and the Splendid China theme park) wouldn't give Winn-Dixie permission to do any remodeling to this store. From what I was told from another contact, the owners of this plaza also own all the funky decor in this store (and not Winn-Dixie), so they control if any remodeling can happen (a reason that would also explain why Winn-Dixie kept all the funky decor in the beginning as well). Since that's the case, that also makes a fixture sale less likely to happen, as it all depends now on what the plaza's landlord wants to do with all this stuff. In addition to that, this store was dedicated to the tourist crowd. This store was not popular with locals since it did not honor Winn-Dixie's weekly circular or the rewards card, leading locals to shop elsewhere for their groceries.

With this store now gone, what exactly will happen to this building going forward is a bit of a mystery. Finding a new grocer for this space would be difficult, as Publix is the only other mainstream option out there. Publix already has a store a mile and a half away from here, but since when has proximity to another location ever stopped Publix in the past?! Other than Publix, there are some independent ethnic-focused grocers popping up around Orlando of late (for example, Presidente Supermarkets from South Florida bought three Orlando area Winn-Dixies that were shut down last year). I don't know if any of those grocers would want to have a store in the tourist district though. Otherwise, this is just a matter of wait and see. However, if the owners of this plaza ever feel the need to part with their funky Chinese-themed decor, I can imagine that a line will be forming to rescue Mr. Panda Bear from an impending doom!

So that's all I have for now. Until the next post,