Like I said at the end of my last post, there are many different ways you can reuse an old Grocery Palace Albertsons store. You can chop them up, turn them into a Walmart, install weird anthropomorphic decor, or my personal favorite: do nothing. However, the former Grocery Palace Albertsons store we'll be taking a look at today has met a different kind of fate - a spiritual kind. Today's former Albertsons store has become a church, one of about 4 "Churchbertsons" floating around Florida if my memory serves me right. Thanks to AFB contributor YonWooRetail2, we'll head out to Lee County for a look at what is arguably the fanciest of the Churchbertsons in Florida... 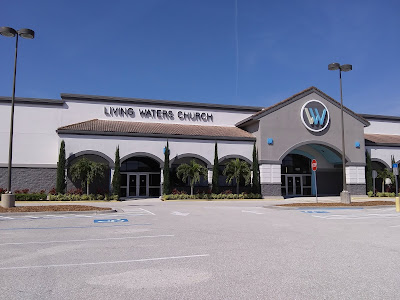 The Estero Albertsons store first opened in 2001, using a rather unique and somewhat upscale design than the traditional boxy Grocery Palace store. The many arches at this store really do a good job dressing this place up, and at least to me, make for a very fitting design for a church too. 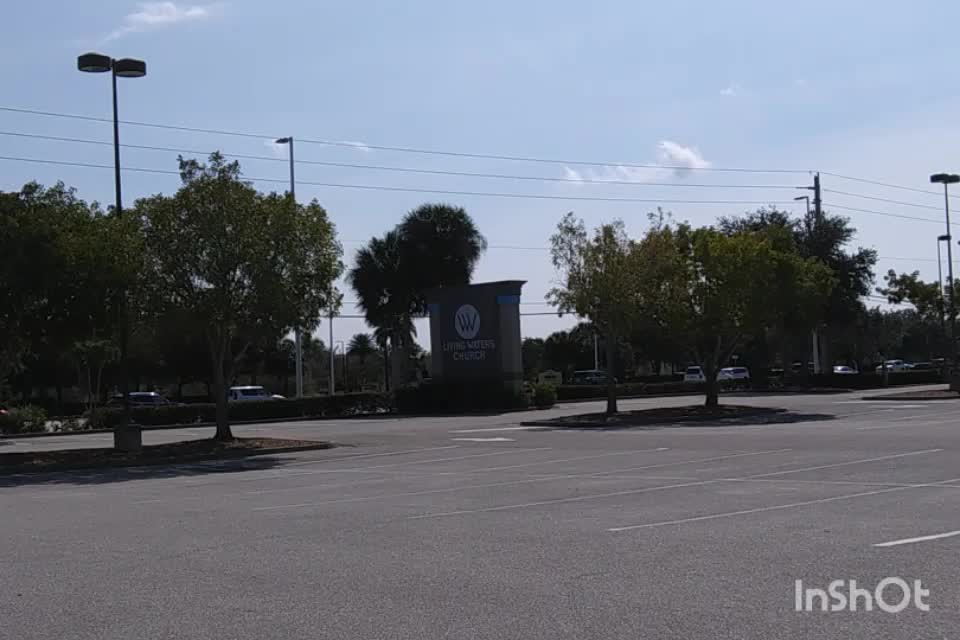 In the video above, YonWoo gives us a short overview of the former Estero Albertsons building, including pointing out some of the labelscars still visible on the facade.

Anyway, now that you've seen the video, let me get back on track with the history of this store. When this Albertsons was first built, Estero was in the middle of a growth boom. Until the mid-90's, there really wasn't much in Estero. Besides a state park and some small neighborhoods, Estero was mostly undeveloped land. Once ground broke on the area's first major new development, the Shadow Wood Country Club, in the mid-90's, numerous other new, upscale gated communities began to pop up in Estero as well. In 2005 the Coconut Point Mall, a large "lifestyle center", opened and made Estero the shopping destination for Southern Lee County. With all the growth in this area, it seemed like Albertsons picked a winning location here, right? However, since this is the Albertsons Florida Blog, my stories concerning Albertsons don't typically have a happy ending... 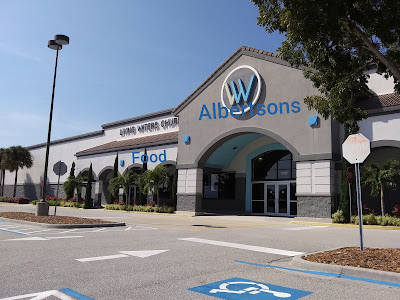 In the above photo, YonWooRetail2 highlights where the Albertsons signs were placed on the facade. In all of the above exterior photos, if you zoom in, you can make out the very faint labelscars from the Albertsons signage discussed in the video, even after the church repainted the building during their remodel. 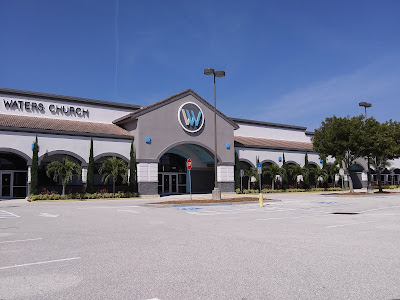 Albertsons sure used lots of arches here, and I quite like it! I just find arches to be aesthetically pleasing for some reason, and they can really make a store look much classier. 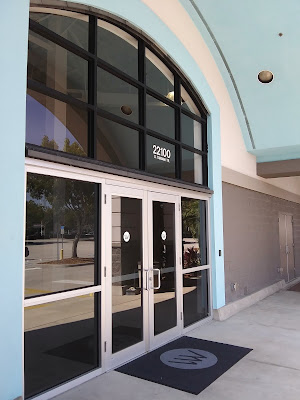 Heading up to the church's front walkway, here's a look at their main entrance. This is also the location of Albertsons' old entryway, the church replacing the old sliding doors with these manual ones. Even though the doors and the bottom windows are new, the panel of windows above the doors are original to Albertsons. The address number stenciling is also left over from Albertsons. 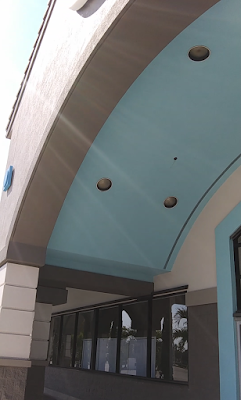 Besides the new paint, Living Waters Church did very little to the exterior. The windows and the lighting are all from Albertsons. YonWoo took this photo looking up into the grand archway above the main entrance, a very distinctive sight at one of these early 2000's era Albertsons stores. 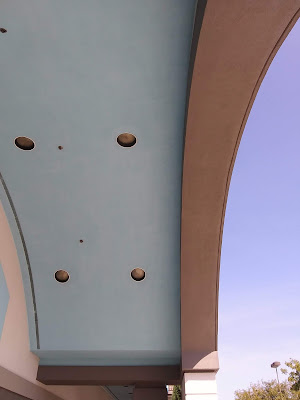 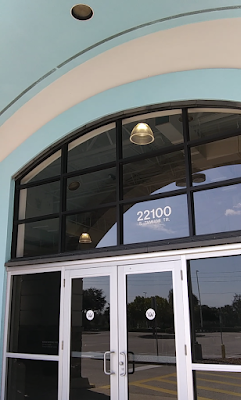 The church was closed during YonWoo's visit to this store, so he decided to press his camera against the front doors for a peek inside... 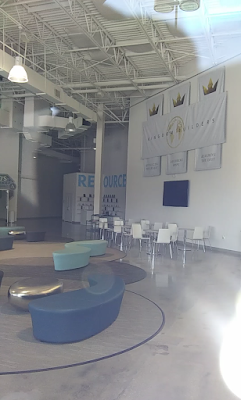 I figured there wouldn't be much from Albertsons left inside this building, although the church did keep the original warehouse ceiling. Regardless, this certainly looks like one very nice church! 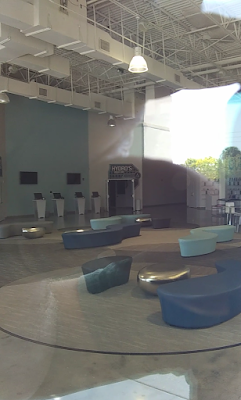 This appears to be some kind of lobby/lounge for the church just inside the entryway, a nice little gathering place before and after services too I'm sure. 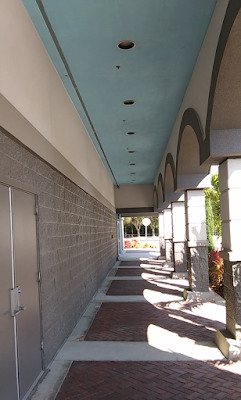 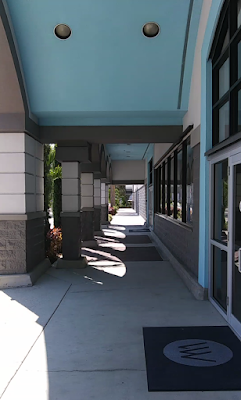 Turning around, here's another look down the front walkway. This photo looks from the main entrance toward Albertsons' old exit doors. 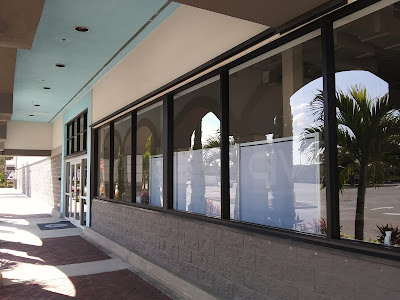 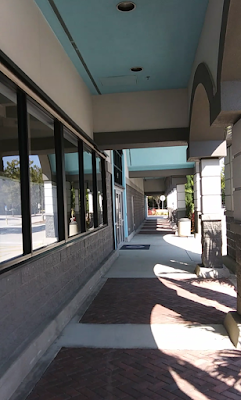 More from the front walkway here, looking back toward the main entrance. 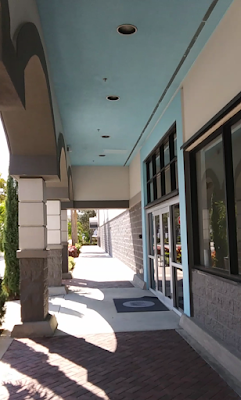 Straight ahead is Albertsons' old exit doors, which now serve as a secondary entrance into Living Waters Church. 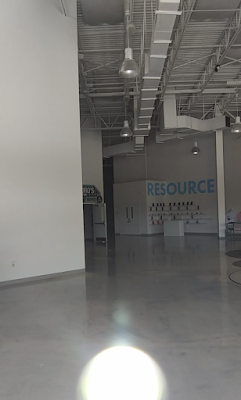 Here's one last look inside this former Albertsons, as seen through the old exit doors. I believe the main worship area (I guess that's what it's called, the area where the services are held), is located straight ahead, through the double doors by the word "RESOURCE" on the wall. Here's what that part of the building looks like now, previously home to Albertsons' produce and deli area. And while we're looking to the lobby, here's a photo of it posted to Google showing what it looks like from the inside. 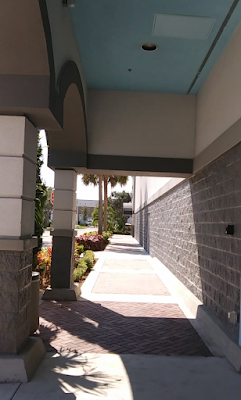 Before heading back out into the parking lot, here's one last walkway view, looking toward the left side of the building. 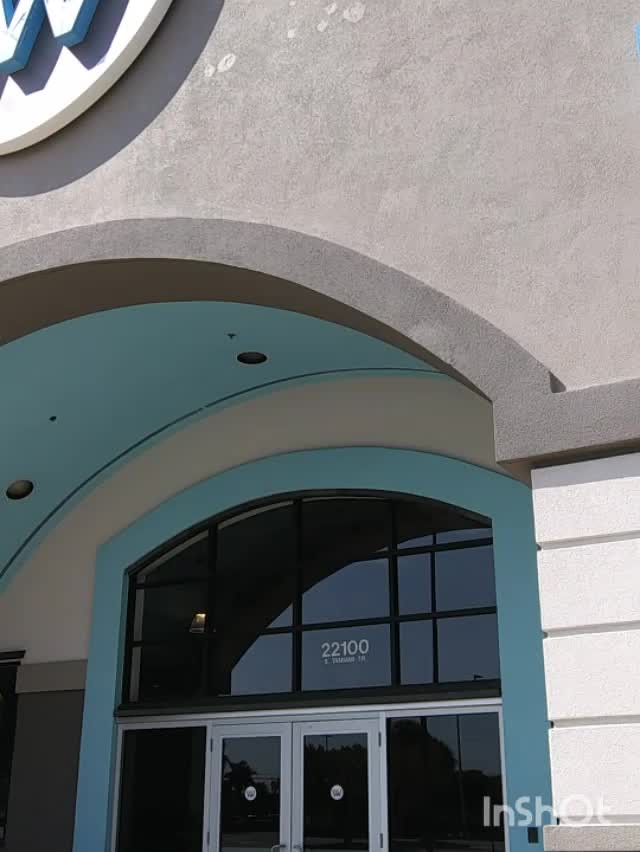 YonWoo also made this video, which recaps much of what we just saw from the front walkway. It's a pretty comprehensive view of the highlights of this former Albertsons store. 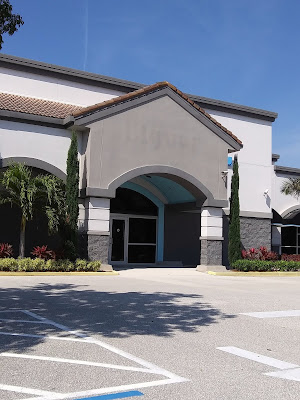 Lastly, here's a look at the old liquor store. As YonWoo mentioned in the first video in this post, the "Liquor" labelscar is still very clear here. 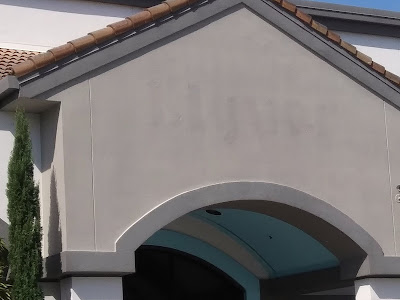 To wrap up this post, here are a few more exterior photos to give us one final overview of this former Albertsons store.

Like I said before, the design of this former Albertsons led to one very nice looking church in the end. As usual, it was really a shame to see all of these newer Albertsons stores be cast off from the chain after relatively short runs as a grocery store. However, that wasn't a very unusual case when looking into the history of Albertsons across the country, especially during their huge expansion push from the late 90's and early 2000's that eventually led to the company's troubles later in the 2000's. 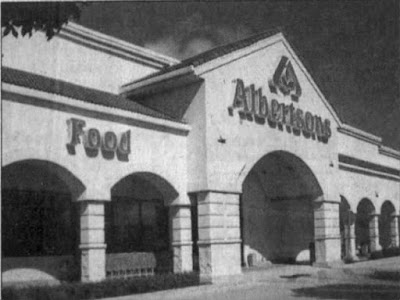 To close out this post, here we have a photo of the Estero Albertsons that YonWoo dug up from a newspaper archive. For that reason, the photo is in black and white, but at least we get some kind of glimpse at this store back when Albertsons was still in the building.

Thanks again YonWoo for the photos of this store, and be sure to check out more of his retail documentation on his flickr photostream here. YonWoo is also a contributor on AFB's sister site My Florida Retail, where myself and some other contributors document the less-Albertsons related retail history around Florida.

However, that's not all for today! Keep scrolling down for some coverage of the now-closed Chinese themed Winn-Dixie in Kissimmee.