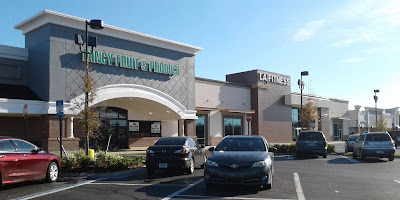 Anyway, as you can see in the above photo, some big changes have happened here at the former Sanford Albertsons since we last saw it on the blog. In mid-2017, it was announced that LA Fitness would be taking over half of this former Albertsons store. After the announcement of LA Fitness's arrival, the landlord was also able to fill the remaining half of this former Albertsons store with two new tenants: Fancy Fruit & Produce and Learning City. Fancy Fruit opened around the same time as LA Fitness in late 2018, with Learning City still under construction as of my visit in early 2019. In today's post we'll take a quick look at the rather dramatic changes that have occurred here over the last two years, which did a good job of removing many of the remaining traces of Albertsons that once lurked around this site. 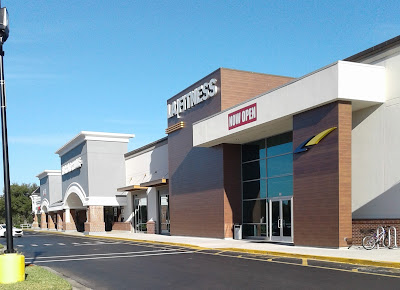 To start off this revisit, we'll begin on the LA Fitness side of the building. LA Fitness takes up the largest chunk of this former Albertsons building, occupying the right half of the building where the pharmacy island, meat and seafood counters, dairy, frozen foods, and the bulk of the grocery aisles were located when this building housed the Albertsons. Unlike in the past, where LA Fitness would take up the majority of a former Albertsons building, they only took a small chunk of it here. I'm not sure if LA Fitness has been shrinking the size of their gyms of late, or if this smaller location is due to an existing full-size LA Fitness being located just four miles to the west of here in Lake Mary (in the same plaza as this former Albertsons store). 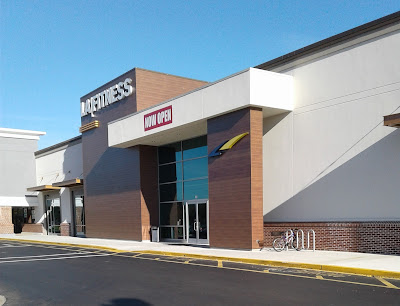 In addition to LA Fitness talking over half of this former Albertsons store, LA Fitness has also begun demolition on the former Longwood Albertsons (#4353) located 5 miles south of here on US 17-92 for yet another new gym. LA Fitness gyms have been popping up like crazy around here, as have strip mall gyms in general. With all the empty retail space becoming available, there certainly has been plenty of opportunity for these gyms to move in. 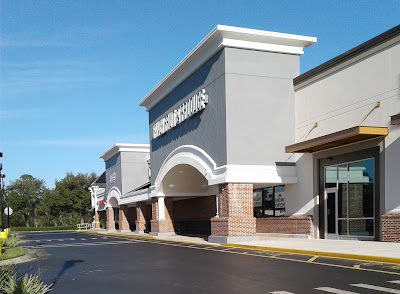 However, as we just saw, LA Fitness stripped away just about every trace of Albertsons from their half of the building. Moving over toward Fancy Fruit & Produce, the original Albertsons facade was preserved, just painted gray from its original rusty orange color. 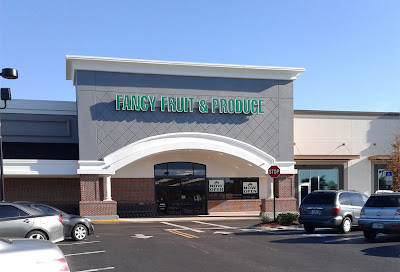 Fancy Fruit & Produce is actually a small chain of produce stores, with 5 or so locations around Orlando. This location is the chain's newest, opening in late 2018. Fancy Fruit takes up the portion of the building that once housed Snack Central and Beverage Boulevard in this Albertsons store. 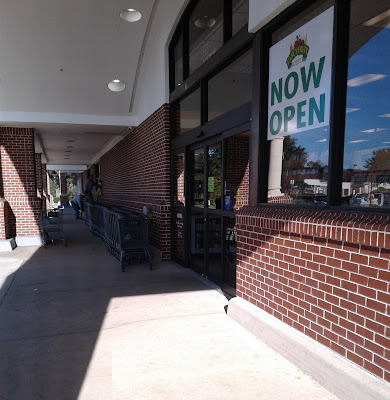 Albertsons' grand archway and entrance has been preserved by Fancy Fruit & Produce. However, this spot where I was standing is pretty much the last place in this plaza where a strong Albertsons presence can still be detected. 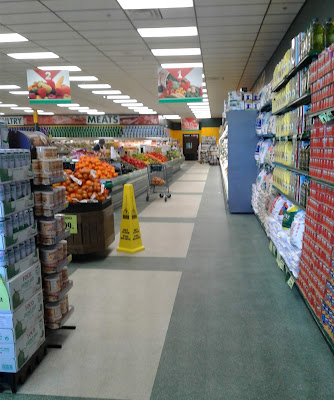 Walking inside Fancy Fruit & Produce, this is what we see. It's certainly not as striking of an impression as what was once here! Fancy Fruit put a lot of work into reconstructing this place, replacing all the floors and even installing a drop ceiling.

Anyway, straight ahead is the produce department, which takes up about half of the salesfloor in here (and since "Fruit & Produce" is in the name of this place, you'd hope a good chunk of the store was dedicated to that!). 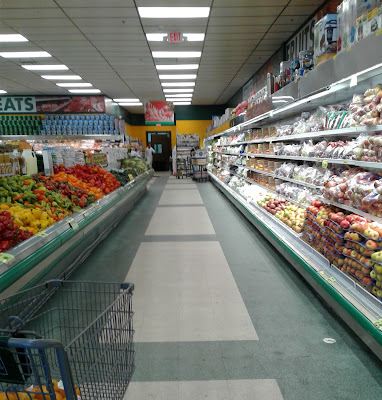 Even though this store is brand new, the coolers and produce cases look like something out of the 1990's. My guess is these cases were probably bought used, which is a common practice with these smaller grocers to save money. 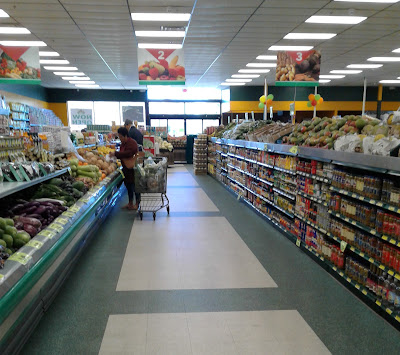 Looking toward the front of the store, we can see the small bit of Albertsons entryway that was preserved in the distance. After the first aisle, which was dedicated entirely to produce, the remaining aisles contain a small amount of other grocery items. However, since this is Fancy Fruit & Produce, pretty much all of the center grocery aisles were topped with even more displays of various produce. You just have to push that produce! 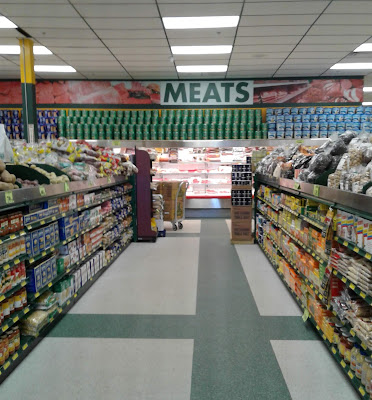 Here's another look down one of the center grocery aisles (complete with the extra produce cases), looking toward the back of the store. In addition to the large produce offerings, this place also had a decent selection of meats. The meat and produce were certainly the two biggest draws to this place. 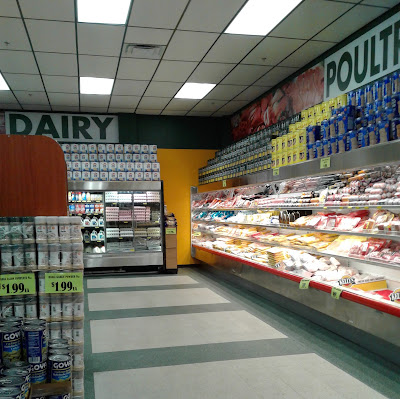 Here's a quick look across this store's back wall. While this store looks big from the front, going inside, it's actually quite tiny. 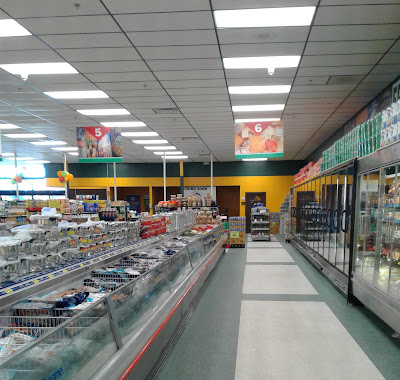 Frozen foods are located in the last aisle, aisle 6. the yellow and green painted area in the front of the store is also something was added by Fancy Fruit for their service desk and offices. When Albertsons was here, that area would have been home to the restrooms and the beginning of the deli (primarily the prepared foods department). There's a chance some of those walls remain from Albertsons, but even so, they were heavily altered in the remodel if that was the case. 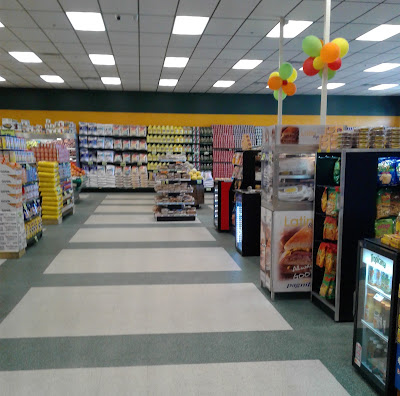 Here's one final look across the front of this store. The checkouts were located to my right, with the bulk rice and such straight ahead. I wasn't this store for very long, somewhat because it was so tiny, but mostly because it was so cold in here! While it was a chilly January morning when I visited this store (well, chilly for Florida, meaning temperatures in the mid-50's), it was even colder inside this store than it was outside! I was freezing the entire time I was in here, the cold air outside actually warming me up! While this is probably a refreshing store to shop in during the heat waves of July, the cold temperatures inside were less than pleasant on this winter morning. 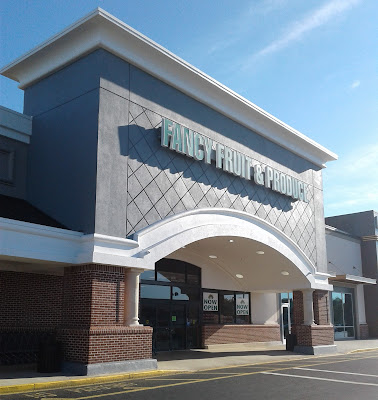 So that's Fancy Fruit & Produce. Here's another look at the exterior, pretty much the last trace of Albertsons here now that the renovations have been completed. 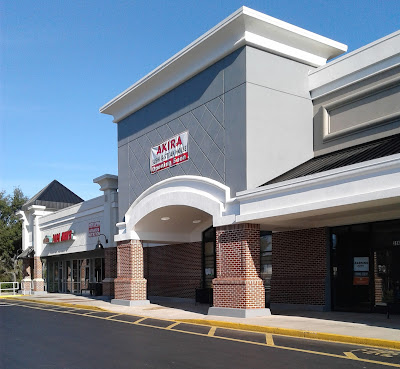 Surprisingly, the landlord was actually able to find a new tenant for the liquor store here. It seems like these old Albertsons liquor stores sit empty for years, even after the main store gets re-tenanted. However, that will not be the case here, as a new restaurant called Akira Sushi and Steakhouse will be opening in this space sometime in 2019. A restaurant is an interesting reuse for one of these old liquor stores, a reuse that I'm surprised doesn't happen more often. 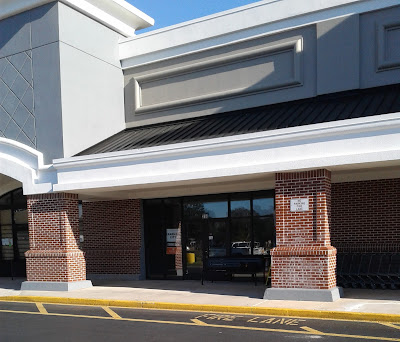 Between the old liquor store and Fancy Fruit and Produce, we find this storefront, which takes up the space of Albertsons' old deli and produce departments. This is the space that will become home to Learning City, which sounds like it will be an after-school tutoring place. 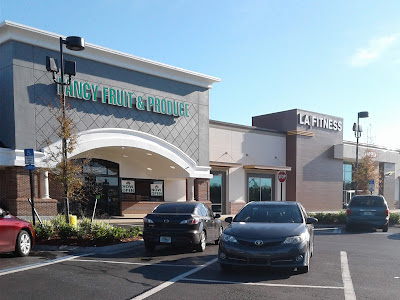 So that's what you'll find if you choose to visit the former Sanford Albertsons today - just a sparse reminder that Albertsons was once located here in years gone by. However, after 8 years of sitting empty, it's nice to see something this this building once again...

...as long as we keep in the back of our minds the memory of what was once here. So to finish off today's post, here's an old photo of the Sanford Albertsons from when it was still open. I forgot I even had this photo, as I just found it going through some of the older files in my archives. I probably downloaded this photo from a real estate posting that's no longer active, but at least I thought to download it way back when!