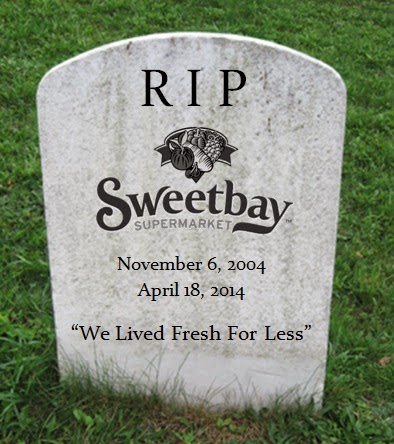 Sweetbay Supermarkets of Tampa, Florida passed away peacefully on April 18, 2014. Born in Seminole, Florida in 2004, Sweetbay was the descendant of longtime Florida supermarket chain Kash n' Karry. Sweetbay was dreamed up as an entirely new shopping experience to rival that of Publix and bring Kash n' Karry out of years of decline. The name Sweetbay was the winner of a contest, and came from the name of the Sweetbay Magnolia tree native to the west coast of Florida. Sweetbay's parent the Delhaize Corporation thought the Sweetbay concept would be unique enough to make their crumbling Florida division worthwhile. But, unfortunately, it just wasn't meant to be. Sweetbay began to fall upon hard times, and their store count began to crumble as the years went on. Their market share fell, and young Sweetbay's life was cut short after barely a decade in existence. Sweetbay did leave a lasting legacy on Florida's supermarket industry that should never be forgotten, whether you were a fan of them or not. Sweetbay was preceded in death by former banners Kash n' Karry, Tampa Wholesale, and Big Barn, along with sister stores Harvey's, Reid's, and Food Lion's Florida Division. Sweetbay is survived by Winn-Dixie. Services will be held at your local Winn-Dixie store. Condolences may be left in the comments section of this post on The Albertsons Florida Blog.


Well, that completes The Albertsons Florida Blog's coverage on Sweetbay's conversion to Winn-Dixie. As of today, April 18, all of the conversions have been completed and the Sweetbay name has been officially phased out. While I don't have any Sweetbay photos to post, I do have some Sweetbay memorabilia in the archives, which you can see at the bottom of this post. However, if you want to see some extensive photos of former Sweetbay stores, you can see some on ferrett111's flickr photostream and on Holcombe of Hidalgo's photostream.

Sweetbay's website has been taken down, and if you try to go to it you just get a message referring to the buyout and a link to Winn-Dixie's website. However, Sweetbay did leave some final words: Thank you for 10 great years! We have enjoyed being your neighborhood supermarket supporting and strengthening the communities where we live, work and do business. We've been committed to the community, dedicating time, money and resources to support the groups and organizations close to the hearts of our customers, neighbors and associates.

UPDATE: As of the 18th, www.sweetbaysupermarkets.com just redirects you to Winn-Dixie's homepage. Winn-Dixie now has an entire cartoon map of what looks like 'Winn-Dixie Land' to introduce themselves to Sweetbay's former shoppers. You can explore the map here.

And now for that little bit of memorabilia I mentioned earlier: 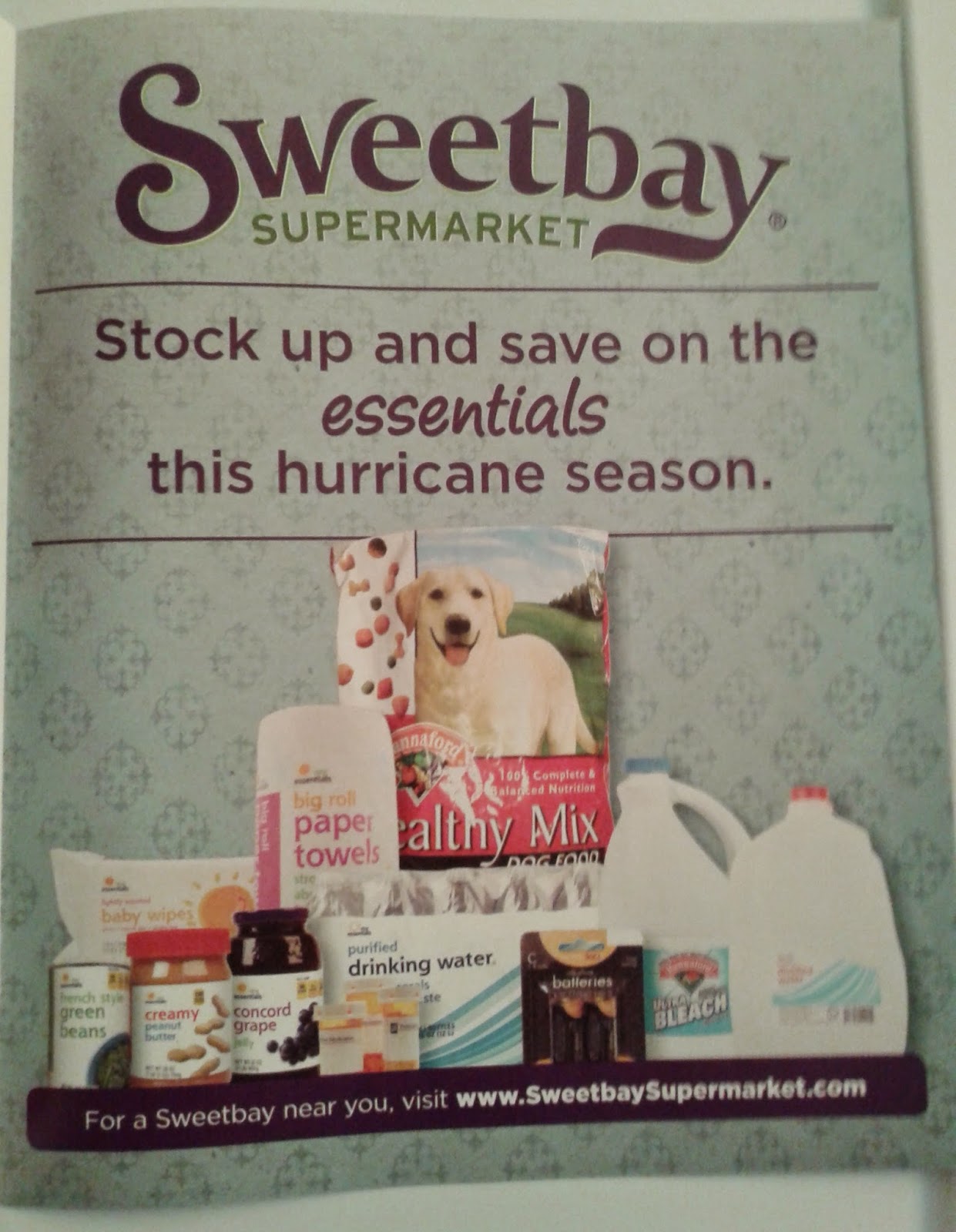 An old Sweetbay ad for hurricane preparedness, which showcases a mix of Hannaford and My Essentials brand products. 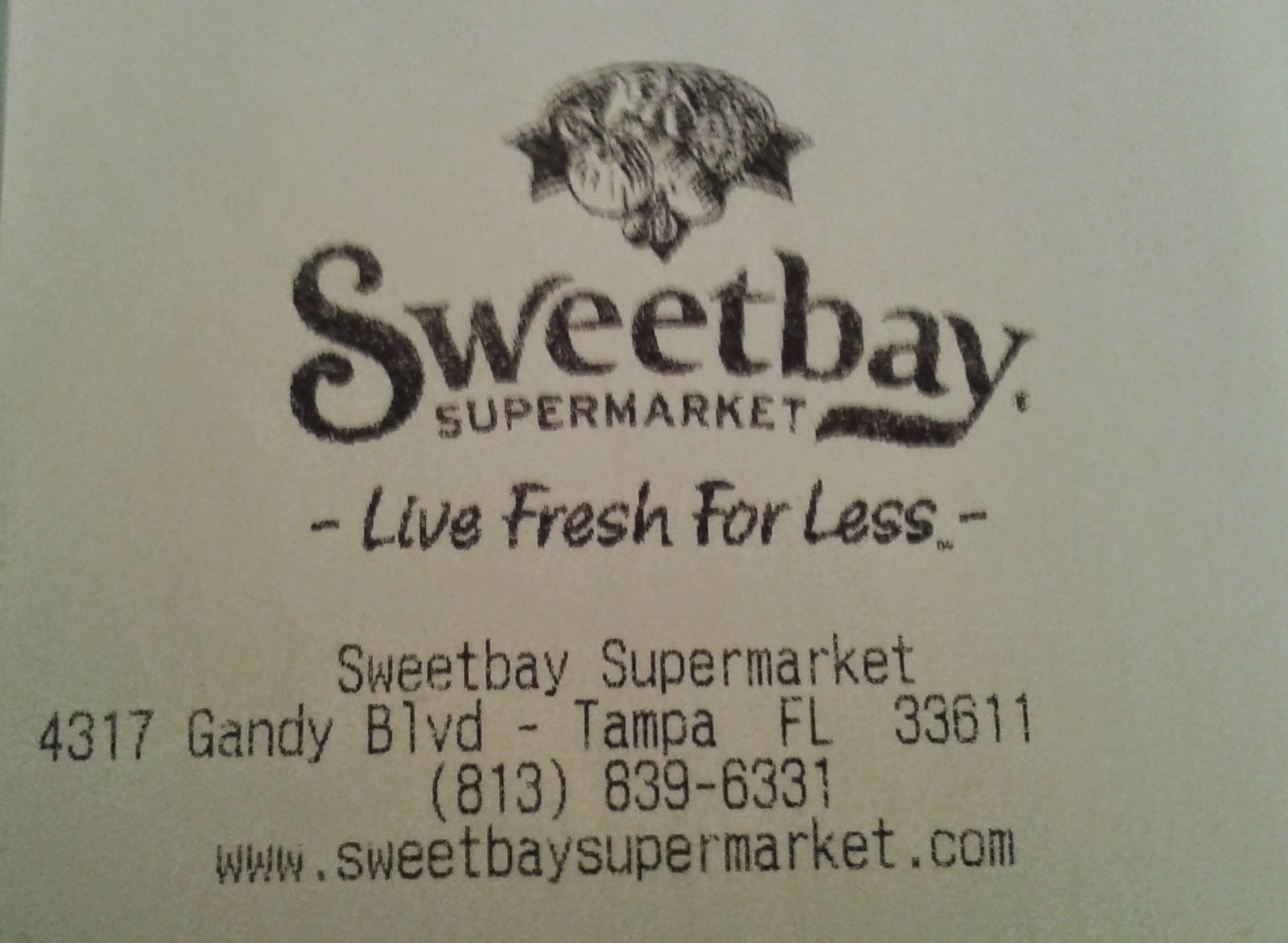 A Sweetbay receipt. I have an old Kash n' Karry receipt somewhere too, but I couldn't find it in time for this post. 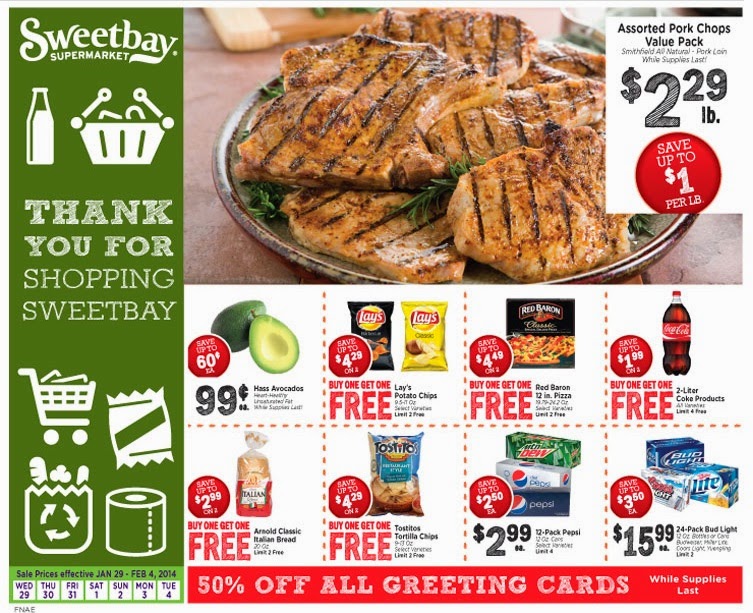 A Sweetbay circular from a few weeks before the conversions began. 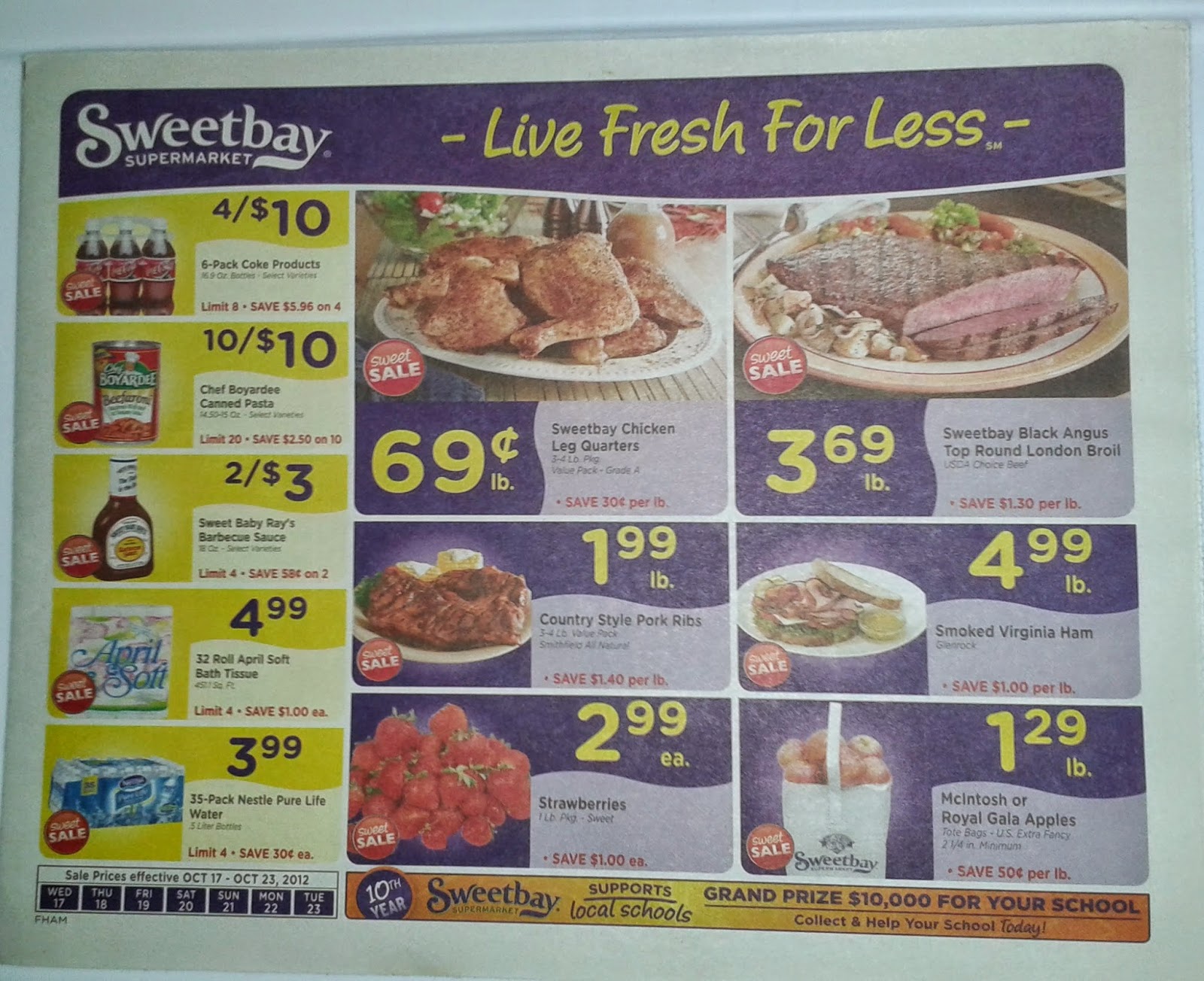 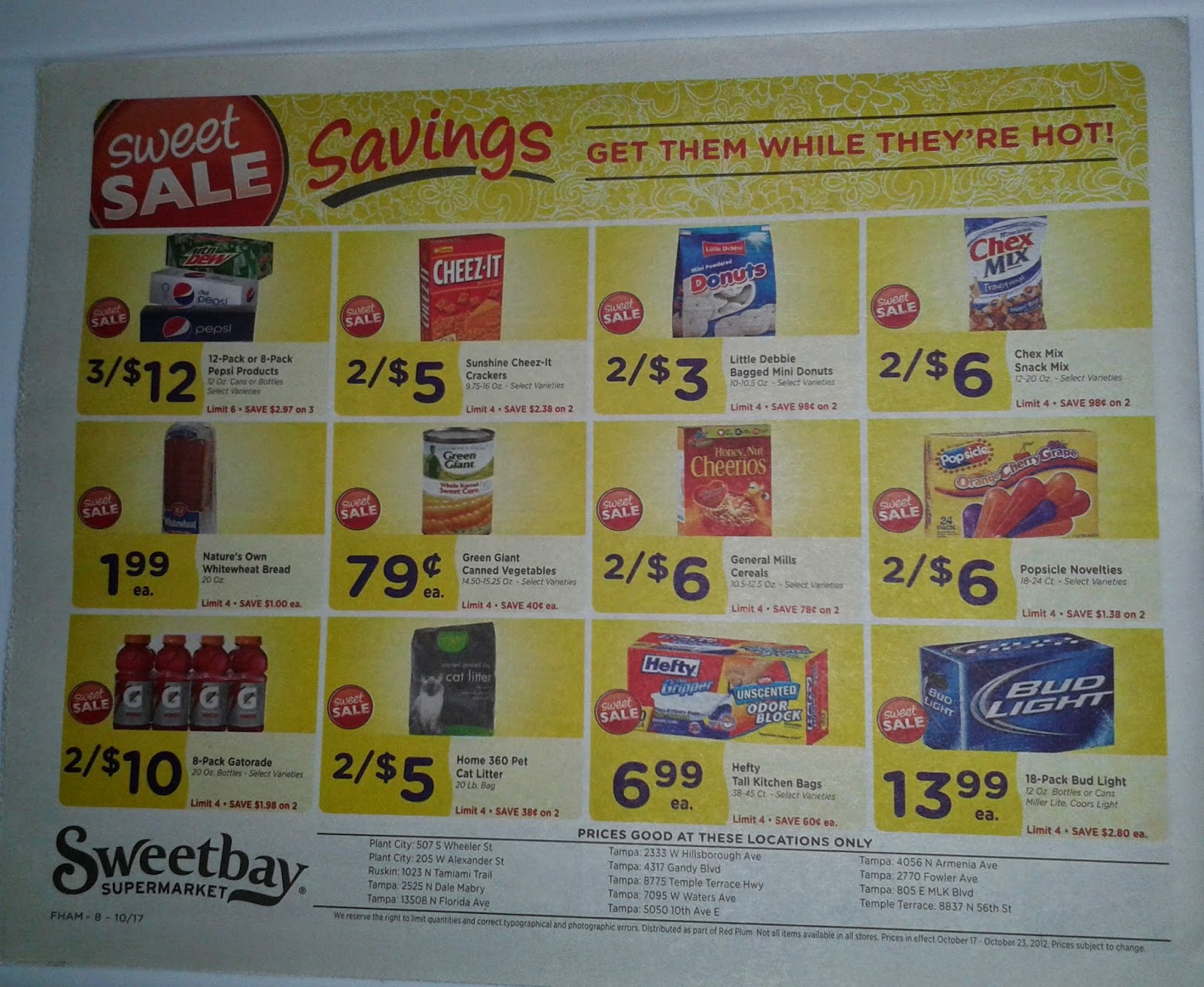 And a Sweetbay circular from happier times.

Hopefully one day I'll be able to visit one of the Sweetbay conversion stores to feature here on The Albertsons Florida Blog. But until then, this will have to suffice.

But before I finish this post, I might as well leave you with an old Sweetbay commercial featuring their spokes butcher Kevin:


So, that's all for now. Sweetbay, enjoy this next part of your journey as one of The Beef People.

P.S. - Who would have thought that Albertsons' final four Florida stores would have managed to outlive Sweetbay? 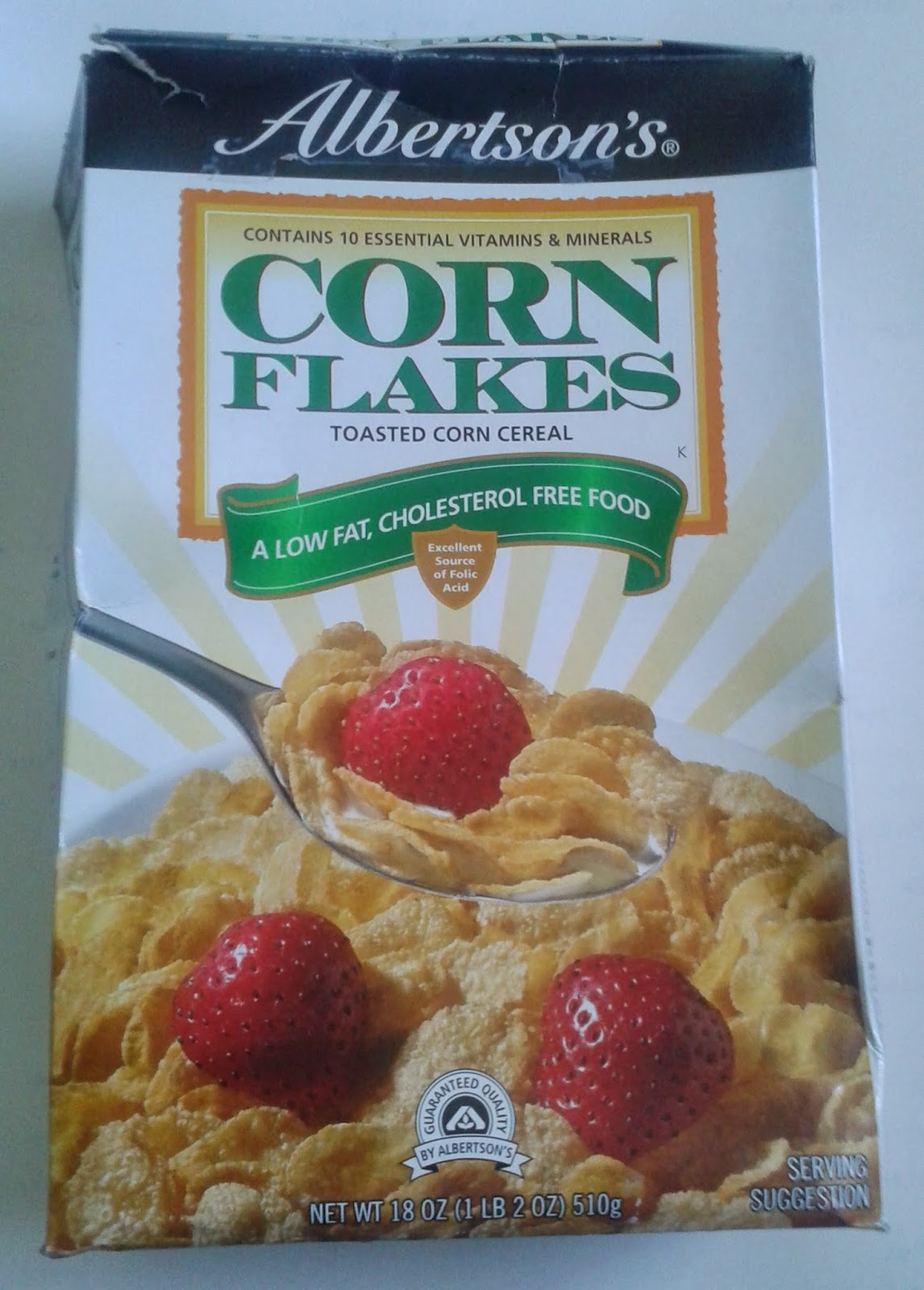 Here's the Albertsons Florida Blog's first Albertsons memorabilia post, an old Albertsons brand Corn Flakes box. This is the packaging design Albertsons used from right around the time they purchased American Stores in 1999 until they were purchased by Supervalu and Cerberus in 2006, which is when they switched to the packaging with the usual Albertsons logo in an oval (click here to see an example of that). The Albertsons house brand was slowly phased out from store shelves in 2011 when Supervalu and Cerberus replaced the individual store branded products with their generic Essential Everyday brand, which is what Albertsons stores still carry to this day. The Cerberus owned Albertsons (which included the Florida stores) began the switch to Essential Everyday a few months later than the Supervalu owned stores at the time did, although Albertsons branding was slowly being phased out before the introduction of Essential Everyday for Supervalu's generic Flavorite brand for approximately a year prior to the introduction of Essential Everyday. The Flavorite packaging looked exactly the same as the 2006-2011 Albertsons house brand packaging, but with the generic Flavorite name in the place of Albertsons' logo.

All of of the other banners that Albertsons owned from 1999 to 2006 used this same packaging, but with each store's respective logo in the black stripe at the top. That script like logo that Albertsons used on their packaging during this time (and on the walls in the Plaza/Theme Park/Grocery Palace interior stores of the early 2000's) was one of the few times when Albertsons actually used an apostrophe in their name!

Now with that background info out of the way, here's a look at the rest of that box: 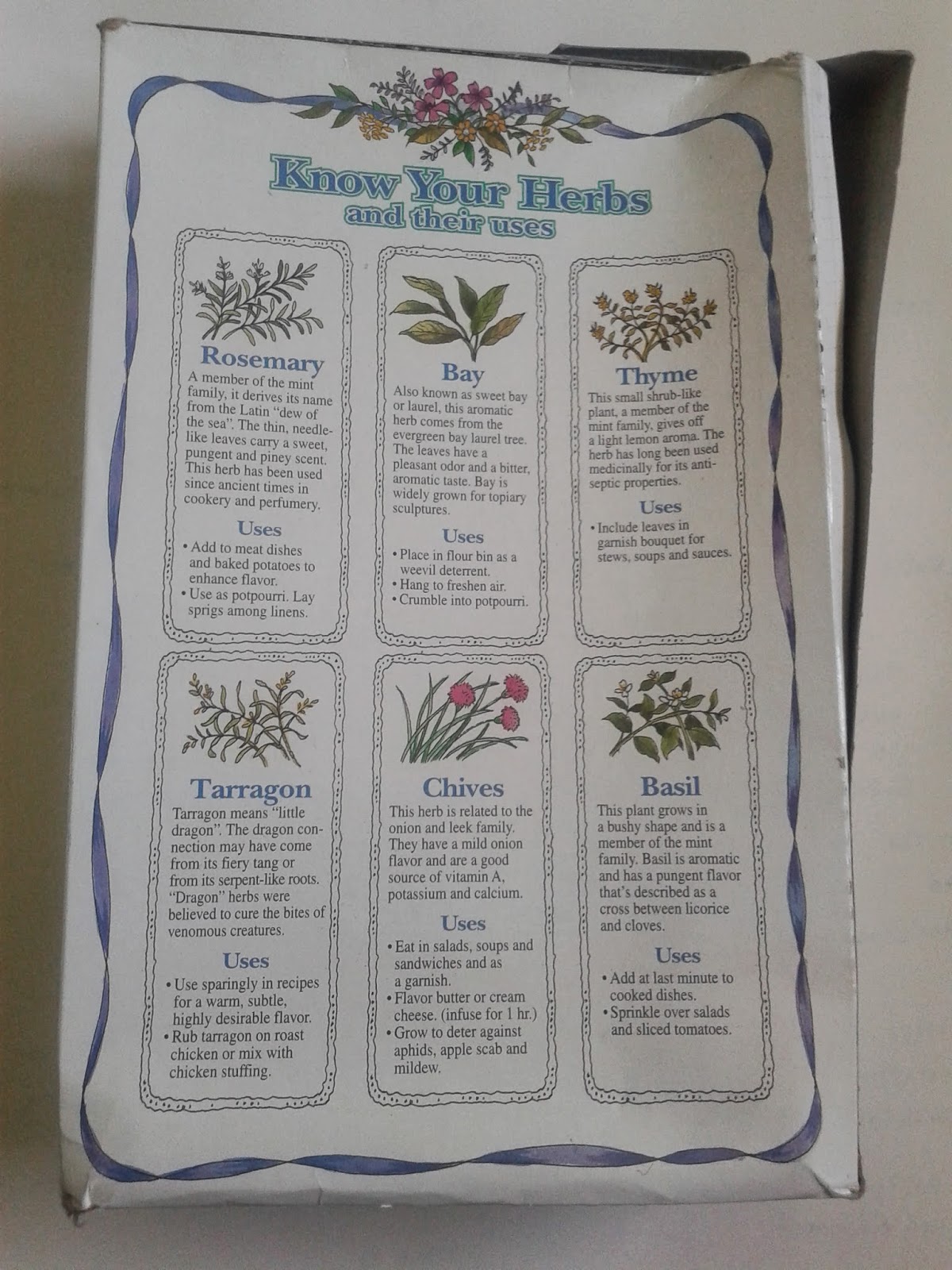 The back of the box, which provided fun facts about herbs for you to peruse as you ate your cereal. When I found this box it was already slightly squashed. 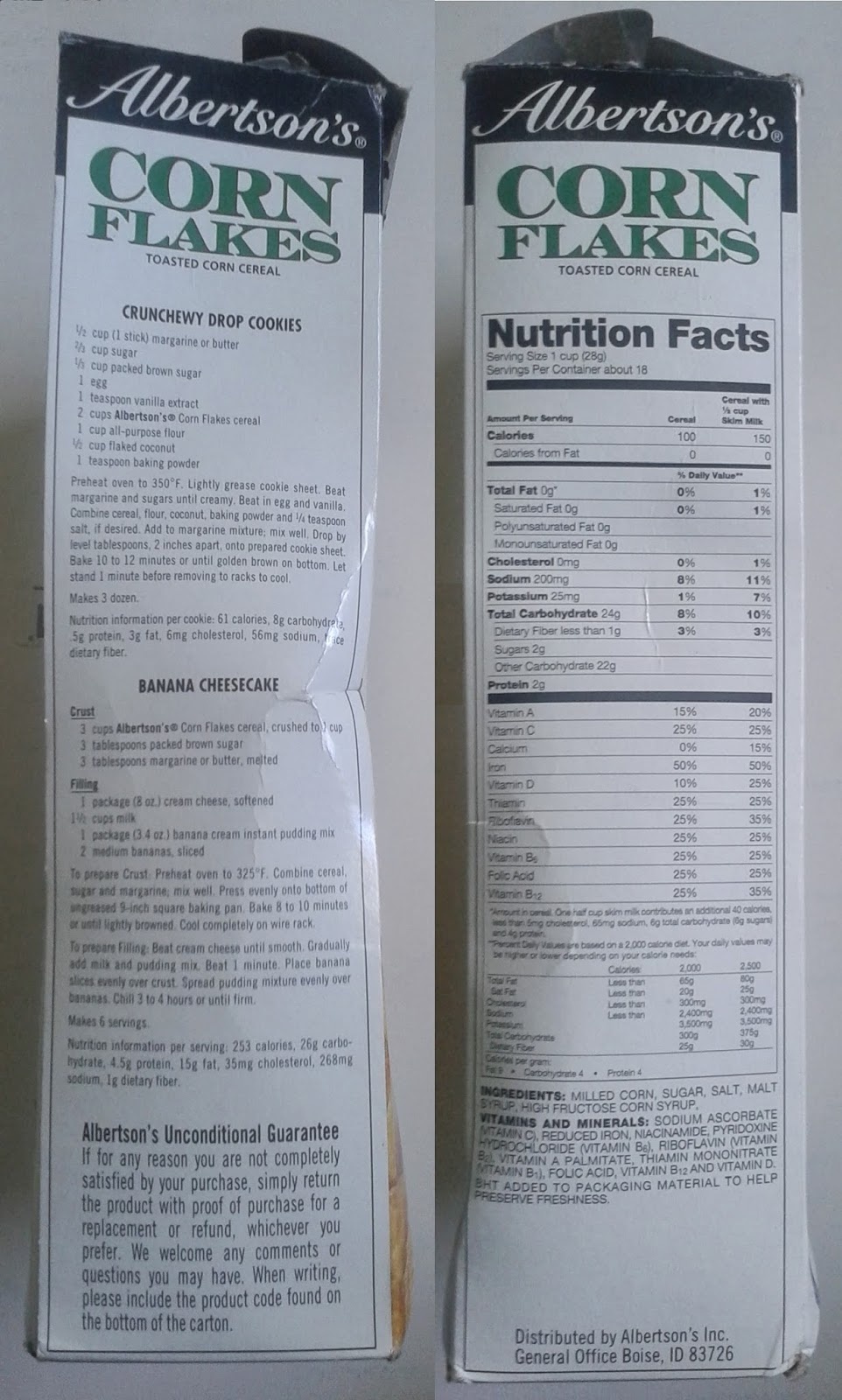 The left and right sides, which contain the nutrition facts and recipes for Crunchewy Drop Cookies and Banana Cheesecake. 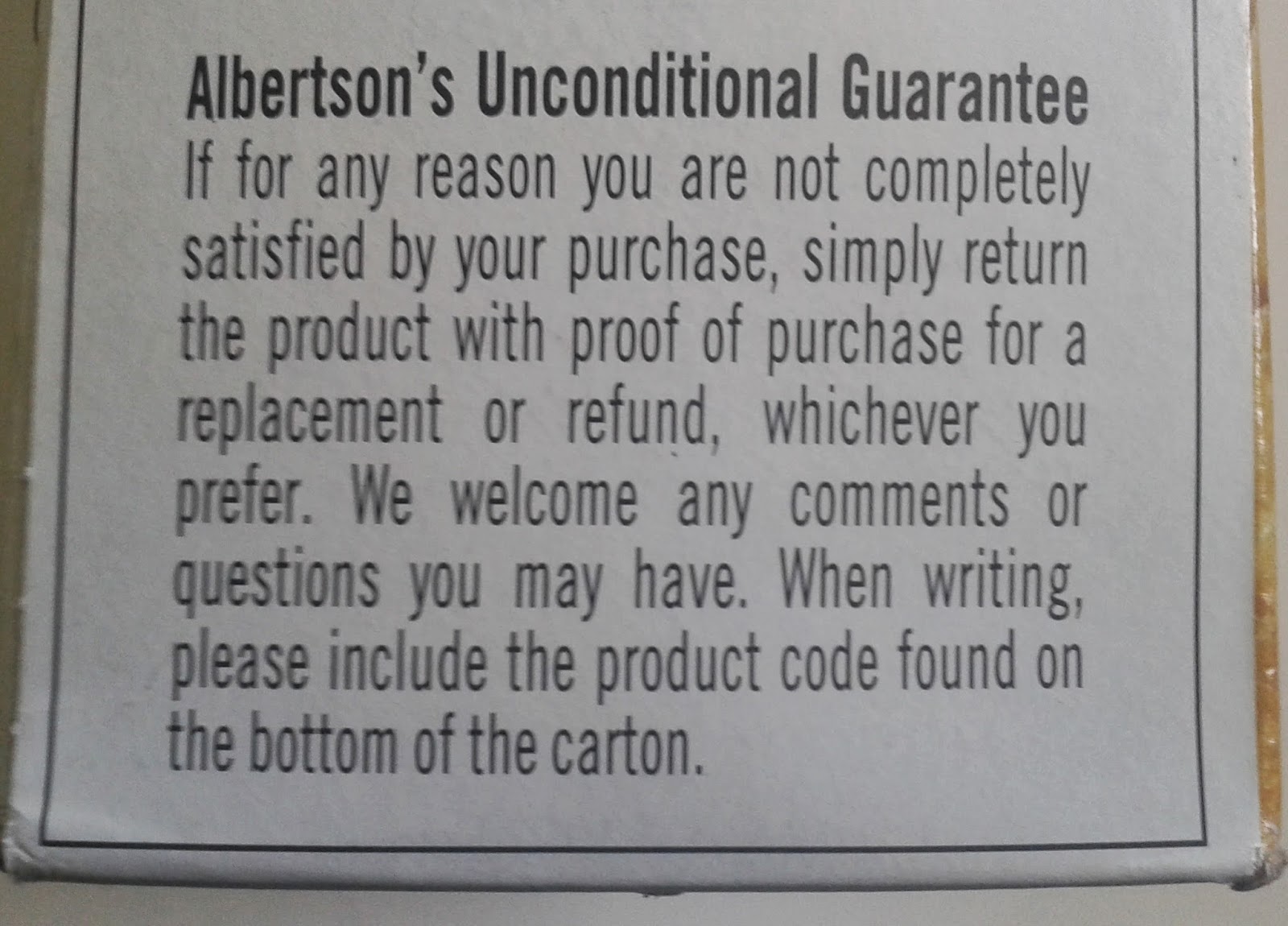 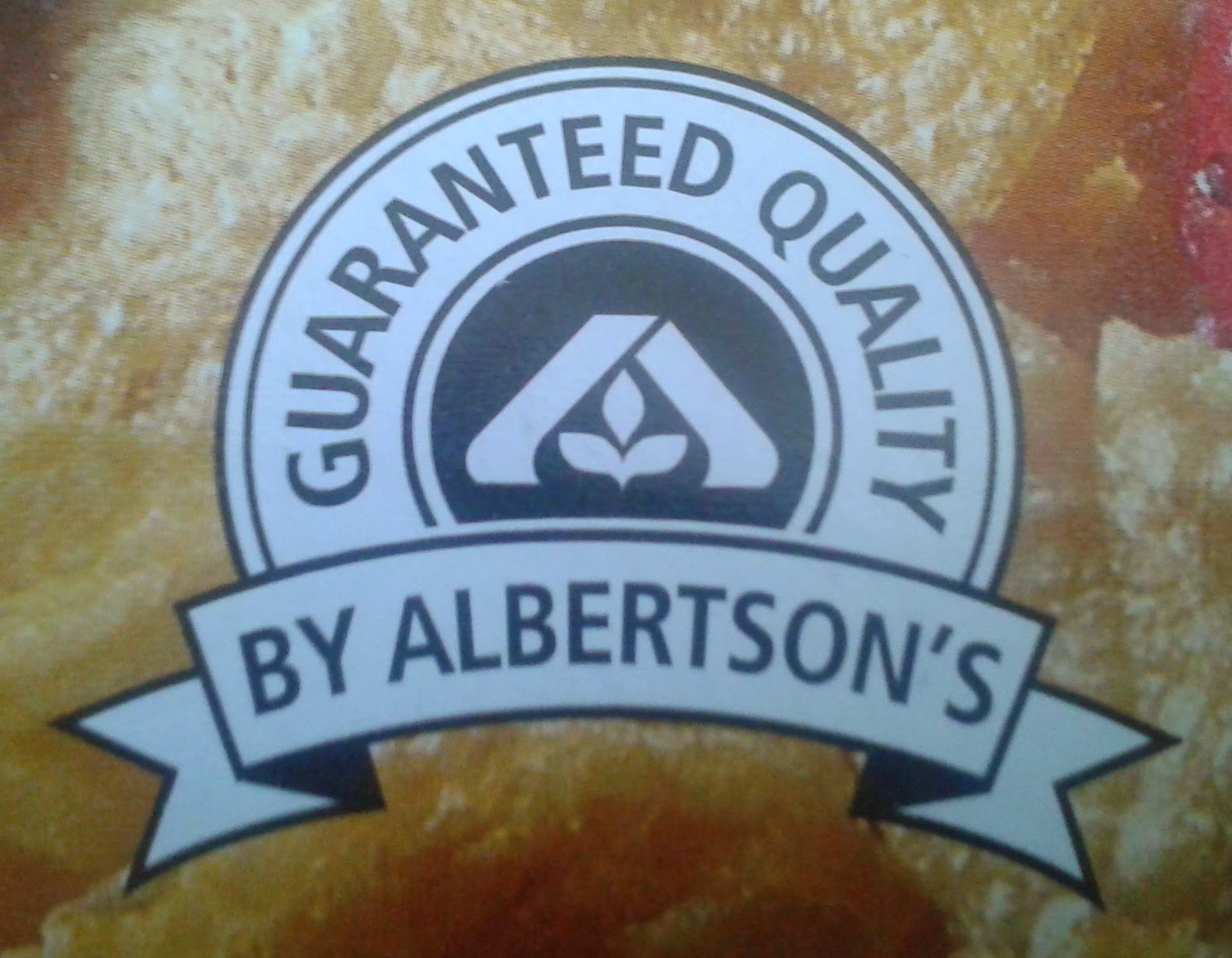 The Albertsons seal. Another feature that was everywhere in the decor of the Plaza/Theme Park/Grocery Palace stores.

Well, that's all for now. Until next time,

So until next time,

P.S. - There's going to be some Albertsons memorabilia going up tomorrow! Be sure to check it out!
Posted by Albertsons Florida Blog No comments: