Today on AFB, I check off another first for the blog: an Alabama Albertsons! As you may already know from perusing the blog and the store list, Albertsons' Florida division once included a handful of stores in Alabama. Albertsons' expansion into Alabama began in 1977 when the company was still partnered with Skaggs stores, all part of Skaggs-Albertsons' plan to create a larger footprint of stores throughout the Southeastern US. After the breakup of Skaggs-Albertsons, Albertsons continued opening stores in Alabama, reaching a total of 7 locations in the state by the mid 1980's. Unlike Albertsons' existing Southeastern presence in Texas, Louisiana, and Florida, the few Alabama stores never got off to a strong start. After a few years of lackluster sales, Albertsons announced the sale of their 7 Alabama stores to Bruno's Market in 1985, the earliest casualties for Albertsons' Florida division. Bruno's was one of the top grocers in Alabama back in the mid-1980's, so they were a fitting suitor for Albertsons former stores. Albertsons took the money earned from the sale of their Alabama locations to invest in new stores in Florida, Texas, and Louisiana. 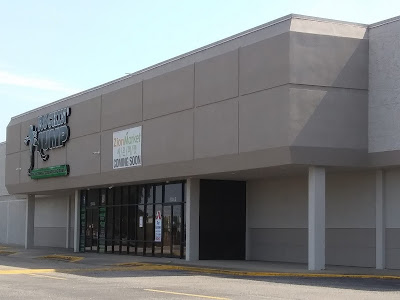 This particular store in Montgomery opened in 1980 as the town's first Albertsons location, located on the eastern outskirts of town on the US 231 beltway. A second Montgomery Albertsons would open on the south side of town in 1982, which will be the subject of a future AFB post. This store was built using the traditional Skaggs-era building style, essentially identical to the stores being opened in Florida at the same time. The only major difference between the Florida and Alabama Albertsons stores was the inclusion of liquor stores. The Florida locations had liquor stores tucked into the side of the building due to our "liquor wall" law. The Alabama locations did not have liquor stores at all, as from what I understand, only the state can sell hard liquor in Alabama (although beer and wine is allowed to be sold in grocery stores). Alabama still has quite a few dry counties and dry cities too, but I don't know where Montgomery falls in with all of that. 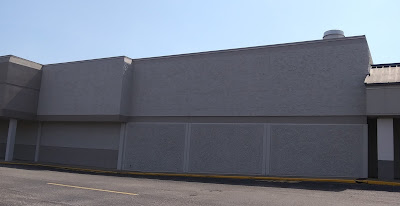 Anyway, Bruno's operated in this building from 1985 until 1998, when Bruno's moved into a larger and more modern former Delchamp's store down the street. I don't think anything operated in this building between Bruno's closing in 1998 and the arrival of the current tenants, as satellite images seem to show this building abandoned for most of the 2000's and early/mid 2010's. Rockin' Jump Trampoline Center would move into the left half of this former Albertsons building in February 2016, 18 years after Bruno's departure, with the right half in the process of becoming a Korean market as of Summer 2019. 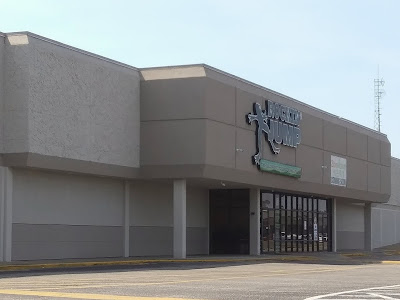 Thanks to AFB contributor and photo sleuth YonWooRetail2, today's trip to Alabama was possible. While out this way for a family reunion, YonWoo made it a point to photograph Montgomery's two former Albertsons locations. This store in the Atlanta Crossing Shopping Center happens to be the first of those Alabama locations to make it to the blog, representing this long gone market for Albertsons. As you've seen in the last few pictures, Albertsons' old facade was left pretty much in-tact here. Even the glass vestibule looks fairly original, although the doors have been reconfigured to accommodate the tenants in the now-subdivided building. 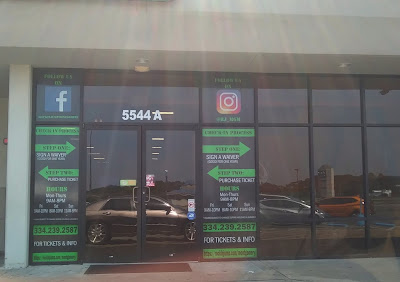 Here's a look at Rockin' Jump's entrance. While the exterior of this former Albertsons building has been well preserved, it appears that Rockin' Jump gutted the interior of their portion of the building upon moving into this space. 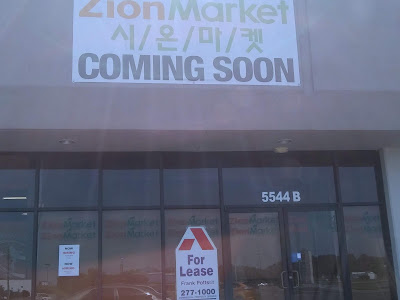 While Rockin' Jump has made themselves at home in this former Albertsons building, Zion Market was still working on renovating their portion of the building. This store still has yet to open as of September 2019, so I haven't seen any photos online yet to tell if any characteristics from Albertsons remain inside this half of the building.

Moving our attention to the left side of the building, here's a look toward Albertsons' old side entrance. 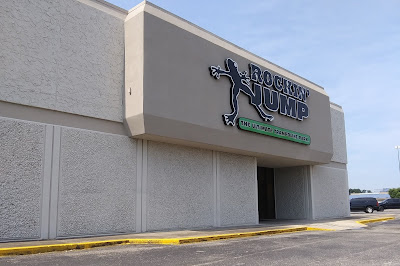 Here on the left side of the building we can see Albertsons' old river rock panel walls remain, since been painted over in beige though. 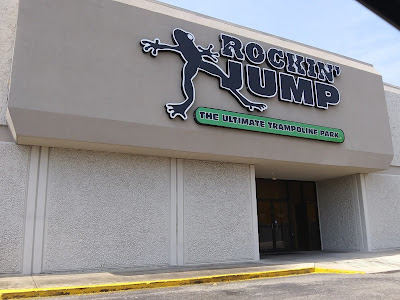 Rockin' Jump still uses Albertsons old side entrance too. Usually when these old Albertsons stores get subdivided the side entrances are covered over, so this was interesting to see. Had a liquor store been installed in this building, it would have been tucked into the left side of this vestibule.

So that's what remains of Alabama's first store in Montgomery, which isn't bad for a building that hasn't housed an Albertsons in nearly 35 years. The other Montgomery Albertsons is also quite well preserved like this one, and still houses a grocery store to this day. We'll eventually get to see that store thanks to YonWoo's retail adventures, but for now, let's take a quick look at the rest of this shopping center: 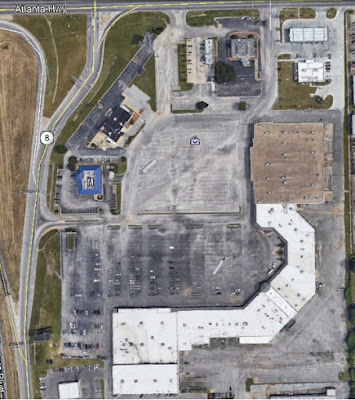 The Atlanta Crossing Shopping Center is a decently sized plaza located at the junction of Atlanta Highway and the US 231 outer beltway of Montgomery. This shopping center is located directly across the street from Montgomery's Eastdale Mall in a major retail corridor. While many of the shopping centers around the mall have seen tenants come and go in recent years, the area still seems decently busy from what I can tell online. When Atlanta Crossing opened in 1980, its anchors were the Albertsons store we saw today (the large building with the darker roof at the top right of the above image) and Service Merchandise (the large building at the bottom of the image).

Pictured here is the former Service Merchandise store, which closed in 2002 with the rest of the chain. After Service Merchandise closed, the building was split between a Fred's Super Dollar and a Chinese Buffet. If the Fred's in this location hasn't closed already, it will by the end of 2019 following the chain's recent announcement of liquidation.

With that little bit of background on the rest of the plaza out of the way, now it's time to look at some satellite imagery of this former Albertsons store. We'll begin by looking at some Bird's Eye aerial images of this building courtesy of Bing Maps: 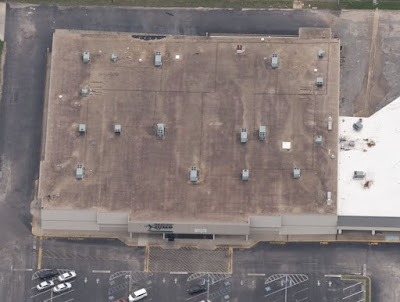 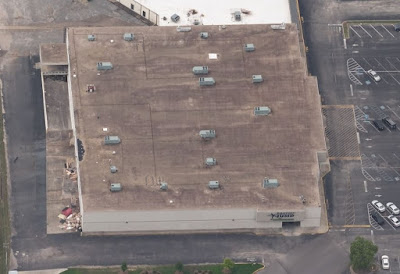 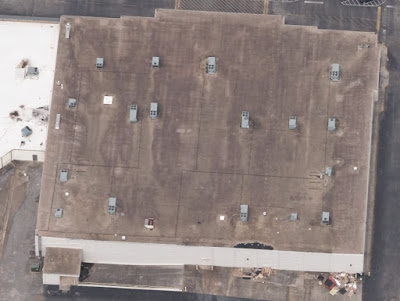 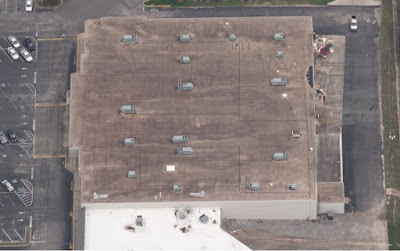 And here are some historic aerial images, courtesy of Google Earth and historicaerials.com: 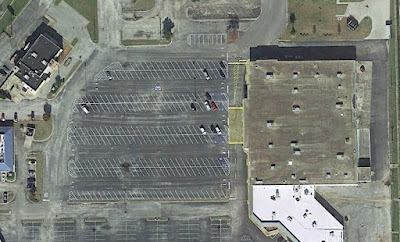 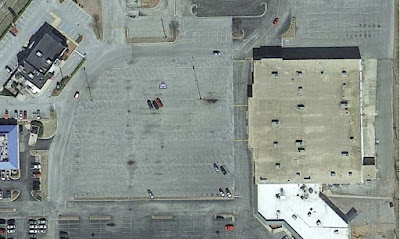 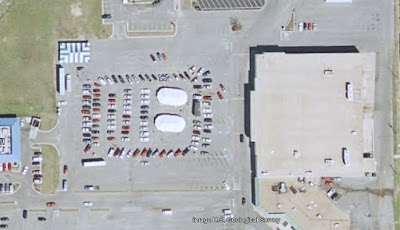 Former Albertsons #4336 - 2002 - Still abandoned, but it looks like a car sale was going on in the parking lot when this image was taken. 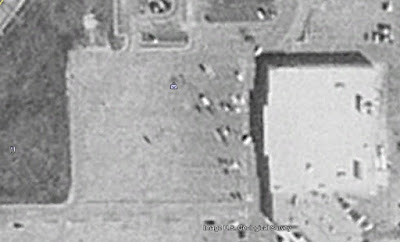 Former Albertsons #4336 - 1998 - Bruno's was still open at the time this image was taken, as they had yet to purchase the old Delchamp's down the street. 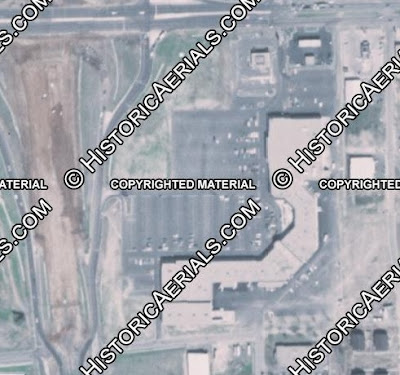 Albertsons #4336 - 1981 - This is probably the closest we'll ever get to seeing an image of an Alabama Albertsons while still in operation, seeing how it looked from above. There was a decent little crowd at Albertsons this day too.

While Albertsons is a rather obscure and long forgotten portion of Alabama's supermarket history, the remnants of that 7 year experiment are still rather obvious all these years later. To conclude this post is a short video YonWoo took driving around the back and left sides of Albertsons #4336, showing more of the Albertsons remnants that remain here today. Eventually I'll get around to posting the other Montgomery Albertsons YonWoo has photographed for us, but for next time we'll jump back to Florida to cover yet another of the many, many Albertsons stores that once dotted the landscape of the Sunshine State.