I Saved, They Saved, But We Couldn't Save U-Save 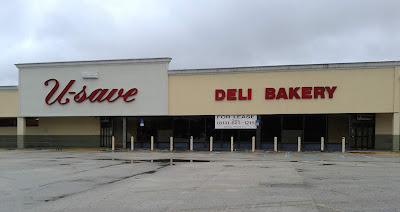 While many big names in the Florida supermarket scene have crashed and burned throughout the years in the rise of Publix, including Kroger, A&P, Kash n' Karry, and our old pal Albertsons, in addition to many others, today's post is going to feature one of the more obscure Florida-based supermarket chains that existed - U-Save. U-Save isn't a supermarket chain you hear about much in regard to supermarkets that operated in Florida, and they weren't a small operation either. U-Save once had around 30 stores at the company's peak, their stores primarily clustered around Tampa, Fort Myers, and the small rural towns of South Central Florida. Even U-Save's demise was quietly swept under the rug, with the chain slowly disappearing as 2011 came to a close with very little reported about it. In today's post I will try to shed some light on Florida's most forgotten supermarket chain, while we take a quick peek at one of this company's former stores in the small town of Okeechobee, FL. 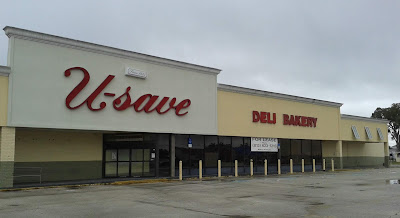 The U-Save supermarket chain had its beginning in a small store called B&B Cash Grocery, opened in 1923 by Charles Bever and his wife Charlotte in Avon Park, FL. Seeing the success of the first store, Mr. and Mrs. Bever began to open additional B&B grocery stores in neighboring small towns throughout rural south central Florida, eventually going for the big time with an expansion into Fort Myers by the 1940s. As a way to keep the company afloat through the Depression years of the 1930s, the Bevers began to emphasize low prices as their company's key to success. By the 1960s, with Charles and Charlotte's son now running the company, he wanted a way to differentiate his stores as grocery competition began to increase in Florida. Deciding to fully embody the "Everyday Low Price" concept spearheaded by his parents, the Bever's son decided to change the name of B&B Cash Grocery to U-Save. The change to the name U-Save brought about the opening of larger stores that offered more modern amenities like in-store bakeries and a larger offering of perishable products. The Bever's son also saw some opportunities in owning commercial real estate, leading to the opening of many U-Save stores in shopping centers wholly owned by the Bever Family. To this day the Bever Family's real estate business is still in operation, with Charles and Charlotte's great-grandson overseeing the 24 commercial properties the family still owns, as well as a chain of 20 convenience stores called Handy Food Stores located in Southwestern Florida. 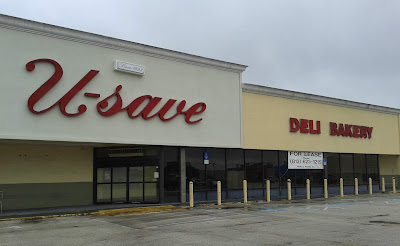 While U-Save had a decent cluster of stores in the heavily populated cities of Tampa and Fort Myers in the company's later years, one of the chain's keys to success was operating large, modern stores in the small towns of rural South Central Florida where there weren't many options for grocery shopping. In the small town of Moore Haven in Glades County, U-Save was the town's only grocery store. U-Save's low price formula worked very well in these small farming towns where income levels weren't very high. However, entering the 2000's, we began to see the rise of the discount grocery chains in Florida. In many of the small towns where U-Save was operating, stores like Save-A-Lot and Walmart Supercenter began to open up, and later on Aldi eventually joined the game. These stores began to put more pressure on U-Save, and probably weren't helping them any. In 2010, the Bever Family got out of the grocery business when they sold the handful of remaining U-Save stores to a man named Oqab Abuoqab. Mr. Abuoqab operated a number of low-budget Bravo branded stores in South and Southwestern Florida, and at the time of the sale didn't have the greatest reputation either due to his shady business tactics and his numerous failed companies. In acquiring the U-Save stores, Mr. Abuoqab used a leveraged buyout method to finance his sale of the stores with a low down payment. As we could probably expect, Mr. Abuoqab ran U-Save into the ground, doing so in only a year. By October 2011, the remaining U-Save stores were closing left and right after store conditions were allowed to deteriorate post-sale, bills were going unpaid, and debt was left to accumulate. In U-Save's last year in business, the stores were allowed to fall apart with no repairs being made, and shelves were lightly stocked and mostly barren of product. Most of these closures occurred with very little notice, with employees not even knowing the store was to close until arriving the next morning to find the doors locked. In the end U-Save slipped into oblivion rather quietly as 2011 came to an end, with an investigation by the Florida Department of Labor into wage and overtime violations marking U-Save's sad and unfortunate end. 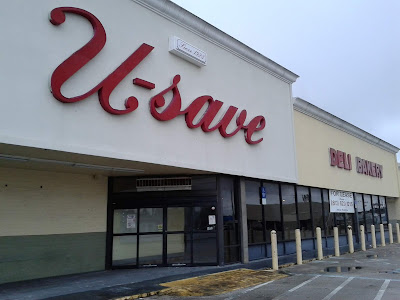 The Okeechobee U-Save's story doesn't have much of a happier ending either compared to the other U-Save stores that survived until the end in 2011. This U-Save store opened in 1965 as the Bever Family began to expand their new low-price grocery chain throughout Florida. This store could have very well replaced and old B&B Cash Grocery elsewhere in town, but I cannot find any record of that at the moment. The store did receive updating throughout the years, with what you'll be seeing in these photos being the product of a remodel in 1997. Interestingly, even though Okeechobee is only a town of about 6,000 residents, this town had two U-Save stores for a good number of years to serve its residents. About a mile and a half south of here was another U-Save store located next to the town's Kmart. That second U-Save store dated back to the late 1970's I believe, and remained in operation until the late 1990's. Anyway, while that second U-Save store came and went, this U-Save store closer to the center of town lasted until all the craziness that eventually brought the chain to an end in 2011. The Okeechobee U-Save was one of the last U-Save stores to close, with the Okeechobee County Tax Collector shutting this store down on December 19, 2011 due to $15,000 in back taxes owed from the year prior. Due to the back taxes, Okeechobee County seized all of the tangible assets of this store, including all the groceries remaining on the shelves at the time of seizure. Due to the rather forced nature of this store's closure, all of the store's signs were left up on the exterior and interior of the building for quite a few years after closing. This building actually sat vacant for 5 years after U-Save was forced out, with an Aldi opening in this building in late 2016. (Keeping that in mind, you'll also be able to figure out just how long I've been holding onto this photoset for too!) 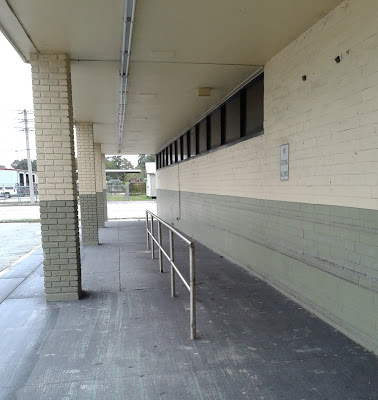 So now that we know what U-Save was, we can take a closer look at this former Okeechobee location in more detail. Stepping onto the front walkway, here's a look toward the left side of the building and what appears to be an old cart storage area. Those windows running near the top of the wall look into the store's old bakery department. 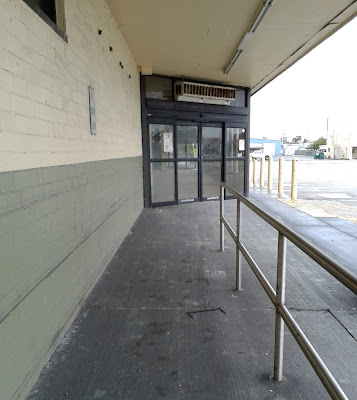 Turning the opposite direction, here's a look toward this store's main entrance. 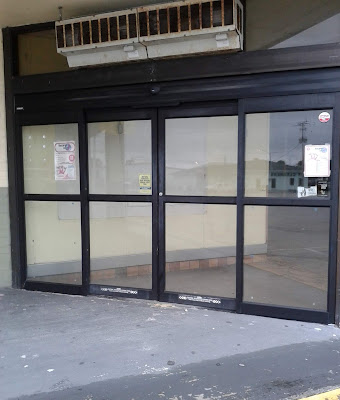 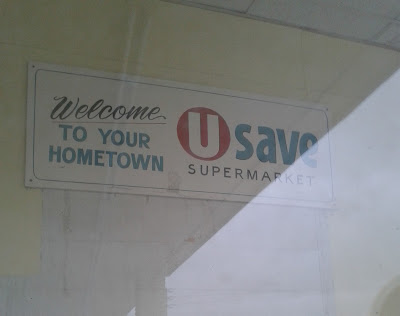 Welcome to your hometown U-Save Supermarket - where you won't find much in store anymore! The U-Save logo you see on this sign was U-Save last logo, used from the early 2000's until the chain's demise in 2011. The newer logo did make it onto some storefronts too, like this one at the U-Save in Clewiston. The logo on the front of this building was the older logo, although I don't know just how far back that logo goes. 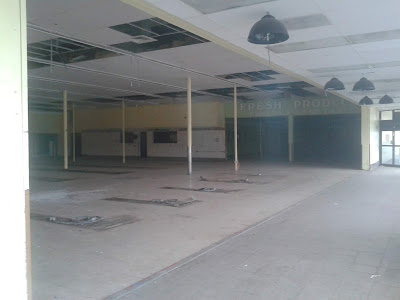 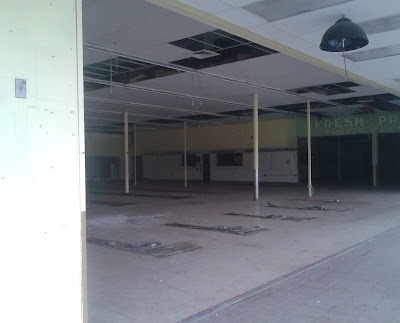 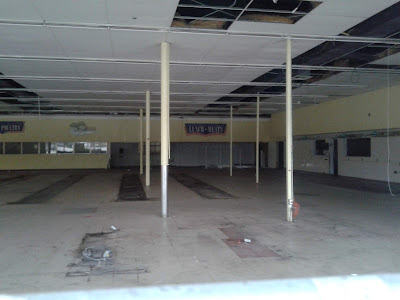 Looking through the front windows, here's a better view into the main sales floor. This looks much more like 90's decor here, seeing those pastel colored signs on a pastel painted wall. It looks like the meat counter was located straight ahead, with meat cases extending along the back wall to the left of that. 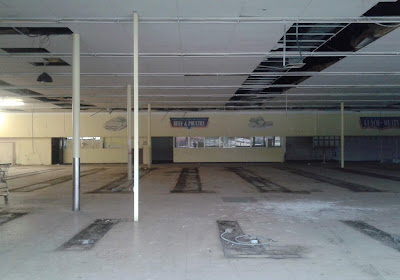 Moving further left along the sales floor, we see more of the meat department and some grocery aisle scars. Also on the wall are some faded pictures of what I presume were meats complimenting the wall signage too. 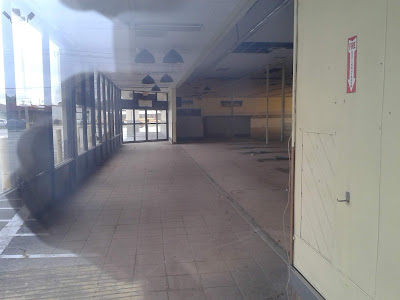 Moving over to the right side entrance, here's a peek through the vestibule. In the background we can see part of where the bakery department was, as well as frozen foods.

Even though U-Save went out in a rather quiet, dismal way, it was quite impressive that this store lasted for 46 years in this location. Albertsons as a whole didn't even last that long in Florida! From what I've read in the few articles published about the closure of the U-Save stores, these small town locations were quite well liked by locals due to the low prices and additional options that U-Save provided to these small towns. Unlike some other small towns in Florida's Heartland, Okeechobee has a rather extensive grocery lineup. Okeechobee is one of very few towns out this way to have a Publix, in addition to Winn-Dixie, Walmart Supercenter, Bravo, and now Aldi (which took the place of this U-Save). While Aldi completely gutted the inside of this building prior to moving in, if you click on that previous link, you'll see they left most of U-Save's exterior in-tact. 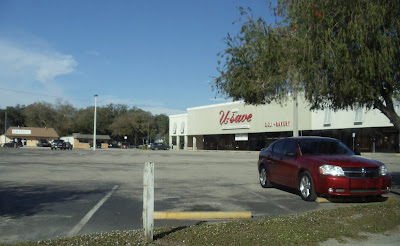 To finish out this post on the history of U-Save, it turns out I had one additional photo of a U-Save store hidden away in my photo albums. This U-Save is the former location in LaBelle, FL, a small town in Hendry County not far from Fort Myers. This photo depicts the store in December 2011, about two months after its closure. I took this picture out a car window passing through town on the way to Fort Myers for a day trip, long before I knew I was starting this blog. I guess I had good foresight on some things back then, but if only I thought to photograph an Albertsons or two back in 2011 also! I think I took this photo because this place looked abandoned as we were passing by. It was either for that reason or because I had no clue what U-Save was, or maybe both! This building was repurposed not long after U-Save closed into a Dollar General Market, who also left the exterior mostly in-tact after a rather thorough interior remodeling.

So hopefully with this post, U-Save won't seem as obscure or forgotten as it once was. There really wasn't much information on this chain out there, so this post should serve as a nice completion of the chain's forgotten history. Even though the U-Save stores are gone, like I said earlier in this post, U-Save's parent company still lives on as a real estate holding company called B&B Corporate Holdings. In addition to that, B&B Corporate Holdings also owns the Handy convenience store chain, B&B's only division that is still involved in retail sales.

I hope everyone enjoyed this look into yet another defunct Florida supermarket chain. I still have plenty of other chains to write about that gave Florida a try and failed, so there is more to come in the future. However, for now, until the next post,