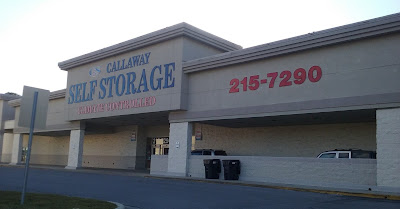 This former Albertsons store was one that always fascinated me. I found this store by accident while scanning over satellite imagery of the area a few years back, probably after looking up the history of an unrelated former store down the street in the old Callaway retail district. From above I thought this building looked a lot like a former Albertsons, although the location seemed a bit odd for one. When I clicked to view a streetview image of this building, this store's past couldn't have been any more obvious. This here is the very short lived Albertsons #4425 of Callaway, FL. Callaway is a suburb of Panama City, located to Panama City's southeast. Callaway was home to a decent sized retail district of its own up until the 90's, with stores such as Walmart, Kmart, Winn-Dixie, Food World, TG&Y, and other smaller stores in the retail cluster. The growth of this retail district was probably spurred due to the fact that Callaway is located just over the bridge from busy Tyndall Air Force Base. While the air force base is still in operation and is still a draw to the area, much of the retail scene in Callaway began to decline by the 2000's, with most of those stores I mentioned either closing or relocating elsewhere by that time. Albertsons opened their Callaway location in May 1996 as their second Bay County location (with the first being the original Panama City store, #4355), at a busy corner at the very northern edge of the Callaway retail district. For one reason or another this store was a lost cause from almost the beginning, and can be filed into the Albertsons Florida "crash and burn" folder. This store closed only three years after opening, with the official closing happening sometime around October 1999. While I've never found a clear reason as to why this store closed so fast, my guess is that this just wasn't the right area for Albertsons. This area began its retail decline right around the time Albertsons opened this store, and I think Albertsons was just too late to join in. After sitting empty for a while, this former Albertsons eventually became home to Callaway Self Storage in the late 2000's, which it remains today. 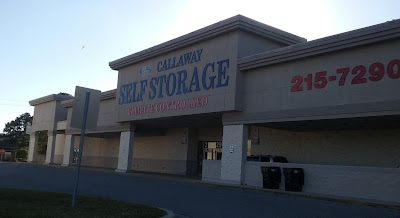 This store was a typical mid-late 90's model Albertsons. For it's entire 3 year life as Albertsons this store would have had the Blue and Gray Market interior decor. Behind those two trash cans is the old cart storage area, which was was built into part of the front walkway at these mid-late 90's stores. Off in the distance you can see the former Albertsons Liquor store on the left side of the building. 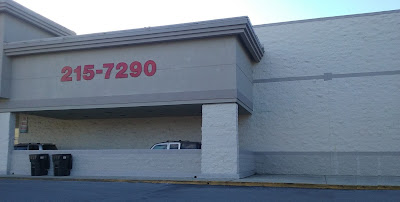 A close-up of the former cart storage area. The word "pharmacy" would have been in the place of that phone number back when Albertsons was still here. 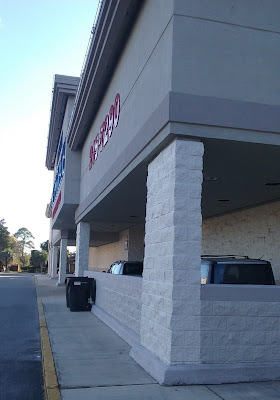 Strangely, there were two cars parked in the old cart storage area. Why these cars were parked here and not in the large empty parking lot is a good question, although Ian reports that one of the cars were running with someone sitting in it. 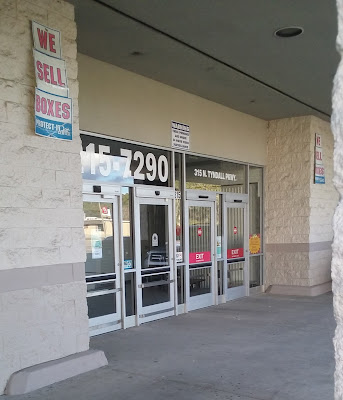 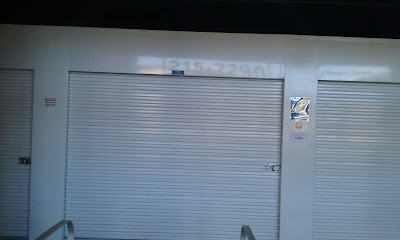 Since this is a storage place, you can't just walk right in unless you rent a unit here. Albertsons' old entrance and exit is still in use for renters of the units to use, however you need a key code to get the door to unlock and open for you now. Ian was able to get this one photo looking through one of the entrance doors. Along with that row of storage units, you can also see a part of the original Albertsons railing at the bottom of the photo. Considering the lights weren't on inside when this picture was taken (this photo was taken on Christmas when the building was closed), I can't tell if there is anything else original from Albertsons left in here. From what I've seen, many retail to storage complex conversions still feel a lot like the original tenants after the conversion, so it wouldn't surprise me if there were some original Albertsons features left in here beyond what we can see in this photo. 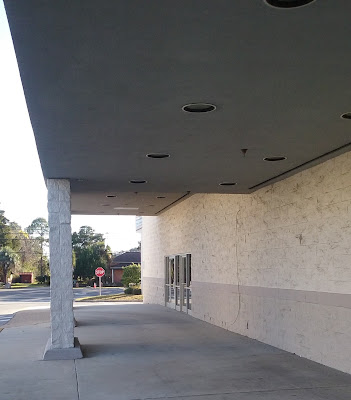 Looking from the main entrance down the walkway toward the liquor store. 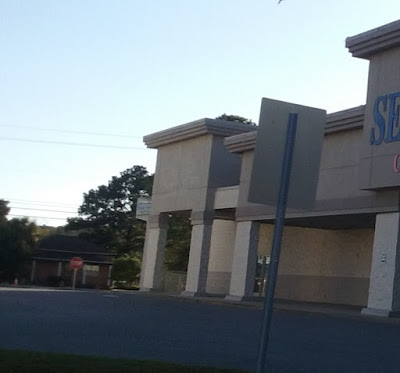 And here you can see the exterior of the liquor store, located on the left side of the building. 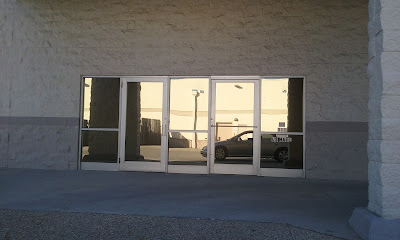 The storage center changed out the doors over at the liquor store, but otherwise the configuration is original. The liquor store is now the sales office for the storage complex, and where you can also go to by boxes and other packaging and moving items. It's not the greatest overview, but here's a picture of what the inside of the old liquor store looks like now.

Moving around to the left side of the building now. Here we can also see the back of the liquor store. 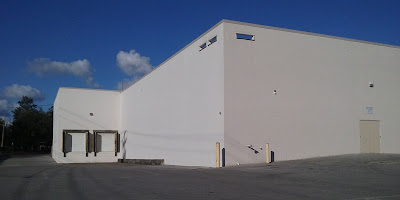 And around the corner from the previous photo we can see Albertsons' old receiving area. 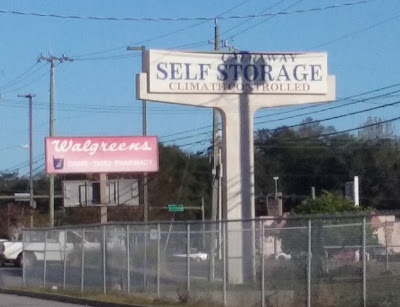 Facing Wewa Highway is the old road sign. This is the classic Albertsons road sign design used through the late 90's, and is a handy reference for identifying former Albertsons locations. 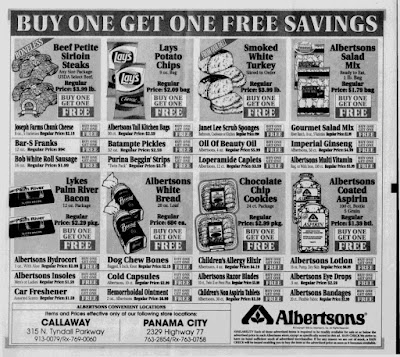 As we begin to wrap up our look at this former Albertsons, I figured I'd also share this old Albertsons ad Ian found in the Panama City News Herald online archives, which dates back to 1998. This is one of the few ads where the short lived Callaway Albertsons was listed as a "convenient location", in addition to the original Panama City store. Also to note, one of the specials of the week in this ad were those famous chocolate chip cookies!

Now to begin our satellite images, starting off with some Bird's Eye aerials courtesy of Bing Maps: 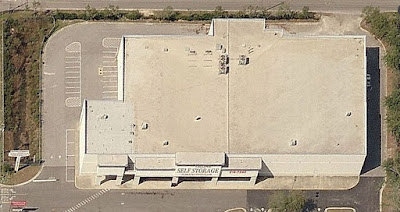 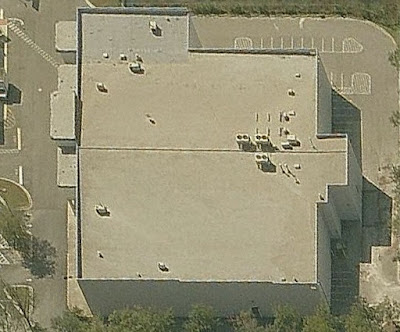 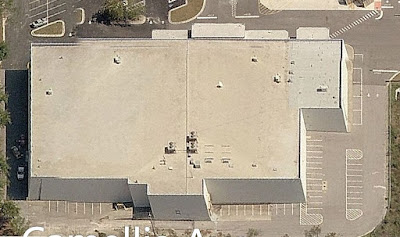 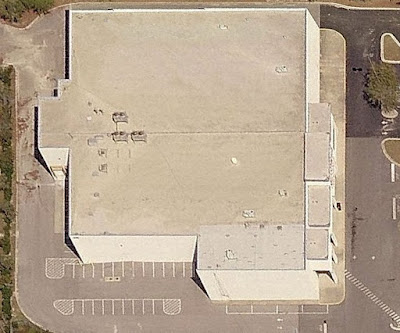 And now for some historic aerials, courtesy of Google Earth and historicaerials.com: 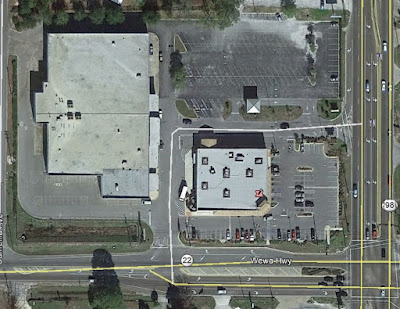 Former Albertsons #4425 - 2012 - In the time after the Albertsons closed, a Walgreens and a Coastal Community Bank drive-thru ATM were built in the parking lot of the former grocery store. Essentially, the current configuration rendered the former Albertsons building useless for anything else other than a storage center, which isn't something that doesn't need a lot of parking. 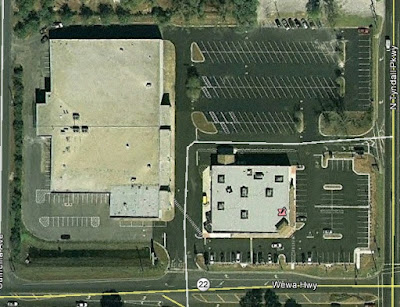 Former Albertsons #4425 - 2007 - The Walgreens had just recently opened, and the bank ATM had yet to be built. I'm not sure if the storage center had moved into the former Albertsons by this time. 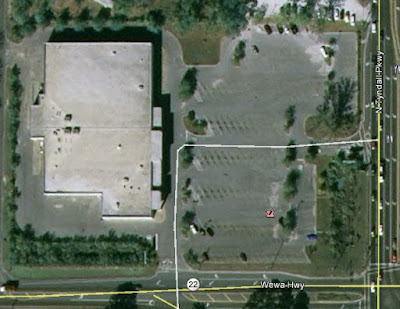 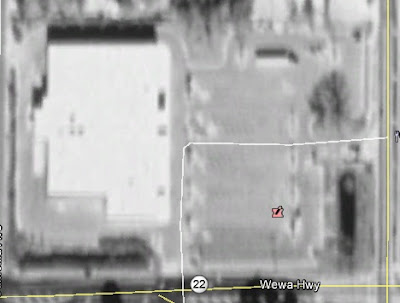 Former Albertsons #4425 - 1999 - This image is a bit blurry, but shows the store abandoned. This satellite image is dated December 1999, which would have been only a month or so after this store closed for good. 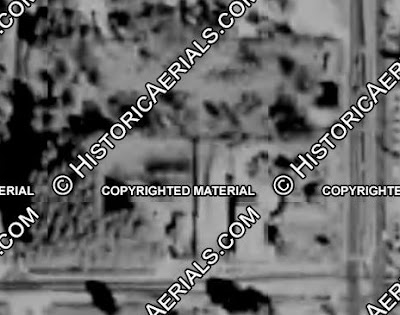 Future Albertsons #4425 - 1994 - No Albertsons yet, but there were some smaller buildings on this corner prior to the Albertsons. 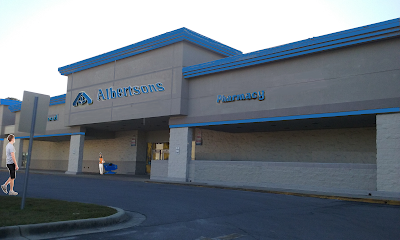 Like Ian did for the original Panama City Albertsons, he also did a recreation of what this store would have looked like back when it was an Albertsons. He wasn't too far off... 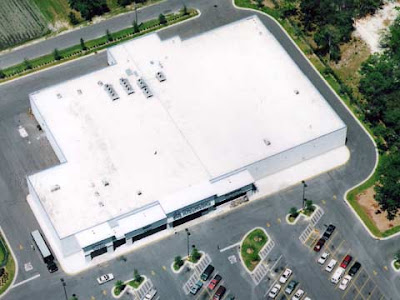 ...as you can see in this original image of the Callaway Albertsons that I dug up a while back. The above image was taken not long after this store opened in 1996, from a vantage point up in the air. I downloaded this picture a long time ago from the website of the contractor or some construction company Albertsons used to build this store. I downloaded this photo knowing it was a rare find, and I'm glad I did, as I couldn't find it again online when I was putting this post together! I was going to surprise our contributor Ian with this photo as he has expressed a good amount of interest in this store, however he managed to stumble across this photo on Facebook only a few days ago on his own! This is the only photo of this store I know to exist from its three short years in operation. Ian mentioned to me that he felt Callaway was a bit of an odd choice for Albertsons to put a second Bay County location. He feels Albertsons would have had much more success with a second Bay County location over in famous Panama City Beach rather than Callaway. Panama City Beach began a huge retail upswing in the 90's and to this day is home to much of Bay County's retail destinations (with the main attraction being the huge Pier Park "Lifestyle Center"). Publix hasn't even expressed interest in putting a store in Callaway yet. I really don't know what Albertsons was thinking when they built this store, but whatever hopes they had here came to a rather short and sudden end with their attempt at a second Bay County store.

So that's all I have for now. Thanks again Ian for sharing these photos with us!