The Safeway Florida Decor Is Revealed!

Thanks to new AFB contributor Dave M., we now have a sneak peek of what the interior of the new Safeway Florida stores will look like. I know there are some who have been waiting to see what it would look like (as well as myself), so here it is: 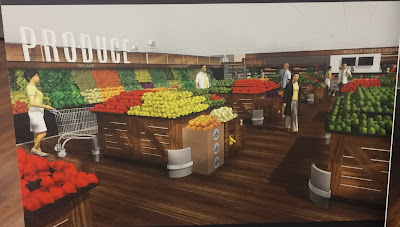 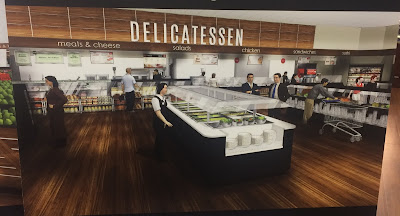 Yes, it's nothing at all like anything Safeway or Albertsons are currently using. These two renderings were posted on an easel inside the Largo Albertsons for shoppers to look at, which you can see below in the zoomed out pictures. I looked all over online, and I couldn't find any other Safeways or even Albertsons with this interior. All the new Safeways I was finding had the Colorful Lifestyle interior. Maybe someone else out there has seen this look before, but I'm pretty convinced Florida will be this decor's debut. It's a very modern look (as was promised in the original announcement of these remodels), and, at least to me, it seems to share some similarity to Winn-Dixie's new "Down Down" interior that debuted back in January. My only criticism of this new Safeway interior is that it looks like a large overuse of brown. Brown walls, brown floors, brown displays. All of the dark colors of the store do make the colors of the merchandise stand out more, which is probably what they were going for. But other than that, I kind of like the look of it. It's a big jump for these three Albertsons to be going from neglected 90's interiors to this. 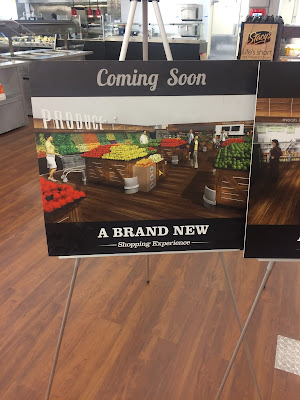 A brand new shopping experience indeed. The photos above and below show the easels these pictures were displayed on. Also in the background you can see the new wood grain/wood grain style flooring, part of the new salad bar, and what I believe is (or will be) the new home of the deli. 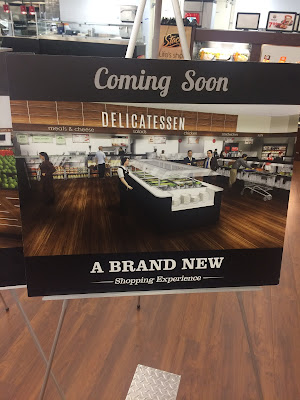 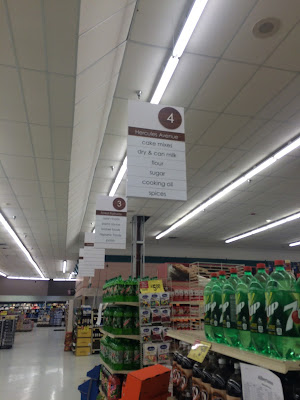 And finally, a look at the new aisle signs. These are basically a new spin on the old Lifestyle ones, which you can see an example of here. Another interesting thing is that under the numbers, each aisle is given the name of a local street. Aisle 4 is "Hercules Avenue", which is a fairly major north-south road in Clearwater, and Aisle 3 is "Forest Parkway", which is a residential street in Largo that loops around a neighborhood a little to the north of this store. Presumably all of the other aisles have a corresponding street name as well. I saw this concept of giving the aisles the names of local streets at an independent supermarket once, and thought it was a neat local touch.

Hopefully in the coming weeks, we'll be seeing more of this new "Brown Lifestyle" interior take shape at these three Albertsons stores. The remodels are coming along nicely, and in the next month or two, the Safeway name will probably be made official.

Thanks again Dave for sending in those pictures, and I'll try my best to keep everyone updated on the remodels as I receive new pictures and information. I have a new store post going up this coming Monday (not Sunday, as posts are usually scheduled), so be sure to come back and check that out then!