Happy New Year everyone! I figured I'd better get some of these recent updates out of the way, and what a better time to do so than now as 2016 begins. 2016 is looking to be the year of the "random isolated Florida division grocery store remodels" (turns out, Albertsons isn't the only one joining in on the fun, as we'll see in a moment). However, first up for today, AFB contributor Ross T. has sent in a few pictures showing the progress of the Largo Albertsons' remodel, as of Christmas Eve 2015, and the information he had to share with us: 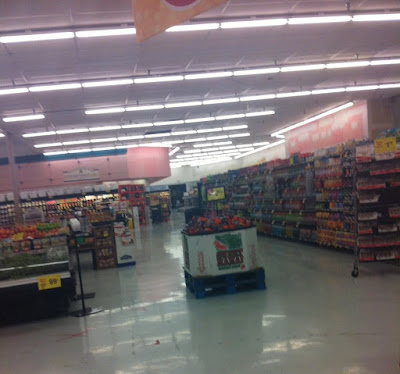 "The recently relocated produce area. The Produce dept. was moved to where the sodas were, and the sodas and sports drinks now have aisles on either side. A temporary wall now blocks the old produce and floral area, and it appears that is where the construction crews are keeping their equipment." 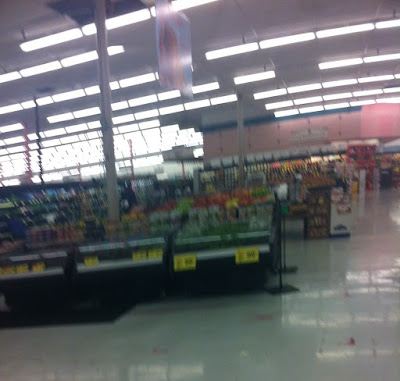 "Another photo of the produce dept" 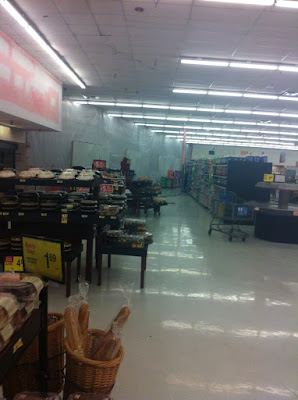 "Looking toward the front from the bakery, the wall blocks off the old produce dept. The bakery is still intact although it has been condensed and moved slightly backward." 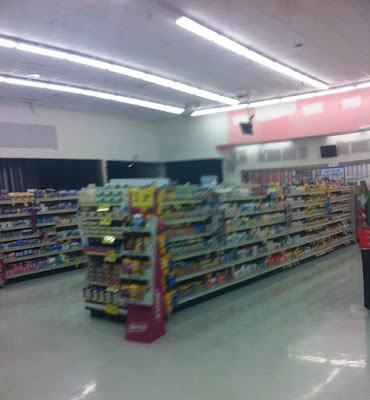 "Looking toward the front, the gray rectangle on the top left is where the TVs used to be [two old, and as of recent times unused, CRT televisions used to be present in that spot in the top left of the photo], from the old video rental dept. this is where they are apparently building the Starbucks." 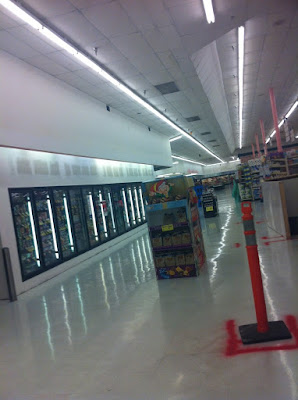 "The back dairy case, with the meat and seafood departments in the background."

Thanks again Ross for your photos and updates from the Largo store!

In other Florida supermarket news, an anonymous commentor left a link on the Kroger Entering Wisconsin post to an interesting article published in the Nassau County Florida Independent. This article talks about how Florida's lone Harris Teeter store in Fernandina Beach is going to be undergoing a large remodel and expansion project, which will allow the store to grow from 35,000 to 53,000 square feet. The Project includes the addition of an in-store pharmacy, Starbucks, wine bar, and expanded selection of prepared foods (Asian bar, salad bar, etc.). There will also be a cheese department and pizza counter added, along with expansions to the meat, seafood and produce departments. Construction at this store is expected to begin in Spring 2016, and be completed by the end of the year. To read the original article, which has a little more detail, click here.

That lone Harris Teeter store in Fernandina Beach is a remnant of Harris Teeter's ambitious expansion plans in the late 90's, which included their entrance into the Jacksonville area, along with Atlanta and Nashville. The Jacksonville expansion only ever grew to three stores: the Fernandina Beach store right over the FL/GA line, a store in Ponte Vedra Beach near the Jacksonville Beaches, and a store in the affluent Mandarin neighborhood in Jacksonville. The Mandarin store closed in 2004 and is now a Publix, and the Ponte Vedra Beach store closed in 2006 and is now a Fresh Market. Like with Albertsons' remodels, I don't know if this is going to be the start of something big or just a chain trying to keep their small presence in Florida looking good. Personally, I feel that if Harris Teeter's parent company Kroger wants to enter Florida, doing it under the Harris Teeter name would be a bad move (I have nothing against Harris Teeter, by the way). I thank the namesake Kroger stores would have a better name recognition, and end up being more successful in the long run. I also think the lone Harris Teeter stores remaining in Florida and Georgia (their Atlanta expansion didn't work out so well either, and the one HT left in Georgia is located in the central coast of the state in St. Simons) should switch to the Kroger name, and let the Harris Teeter name continue in their longtime strongholds of the Carolinas and Mid-Atlantic states. But that's just my opinion on things. Kroger has been giving Harris Teeter an unusual amount of independence since they bought them, so who knows what's going on.

So that's about all for now. More Albertsons coming this Sunday, so be sure to come back and check that out. As far as 2016 post scheduling goes, I'm going for two Sundays a month for store posts (generally every other Sunday), although I decided to throw in two extra posts for January to get the new year off to a good start. Occasionally I may throw in an extra Bonus Buy store if I feel like it. Schedule subject to change at any time though.

Anyway, see you all this Sunday,