***Current and Historical Photos of this store courtesy of Adam R.***

I know what all of you readers were thinking as this post loaded and you saw that first photo: "Finally, it's a Florida Albertsons that's not abandoned or unrecognizable!" Yes, you'd be right if you were thinking that. This is one of the Final Four Albertsons stores still operating in Florida that I mention all the time. The photos you're about to see of the Largo Mall Albertsons were taken by Albertsons Florida Blog contributor Adam back around Christmas 2014, which account for the wreaths on the front of the store. Adam's photos will give us a quick look at this massive store for now until it gets the royal blog post treatment one day. Adam also included some interesting historical pieces that we'll take a look at below, including something really rare that I can't believe I've waited this long to share with everyone.

This building originally started out its life as one of American Store's experimental Jewel-Osco Florida stores in the newly constructed Largo Mall (which was never an enclosed mall as the name might suggest - it was always designed to be a normal outdoor shopping center, and this site was just open land before the shopping center was built). In 1988, The American Stores Company announced they would be entering Florida by building monstrous 75,000 square foot supermarkets under the name Jewel-Osco, focusing primarily on the Tampa Bay area market at first. The name Jewel-Osco was chosen for American Store's Florida division due to the large amount of people in the area who relocated from Chicago, where the original Jewel-Osco was based. These new Jewel-Osco stores would actually bring the Skaggs company (who now operated under the name American Stores) back into Florida after they parted ways with Albertsons back in 1978. On April 2, 1989, the first of these new Jewel-Osco stores opened, with that first store being the Largo Mall location. Jewel-Osco Florida stores featured over 60,000 items, and services such as a full time florist, a juice bar, soda fountain, and a newsstand featuring papers from around the country as some of the bells and whistles according to one news article I read about their grand opening. Jewel-Osco, like most other supermarket chains that tried to enter Florida, had grand plans for the state, including 10 stores on Florida's West Coast stretching from Tampa Bay to Fort Myers by 1991, and by 1992, if all went well out West, Jewel-Osco wanted to begin a push into Florida's East Coast in an area stretching from Cape Canaveral to Fort Lauderdale. However, also like most other supermarket experiments in Florida, it just wasn't meant to be. Jewel-Osco's fancy megastores never caught on. Sales turned out to not be that great, and by the end of 1991, Jewel-Osco only had 7 stores in Florida in Largo, Clearwater, Palm Harbor, Hudson, Tampa, Temple Terrace, and Bradenton, all in the Western part of the state, although through further research I discovered plans for two unbuilt Jewel-Osco stores in Town 'n' Country and Brandon that would have opened in late 1992/early 1993 (for more info on the other Florida Jewel-Osco locations and the 2 planned stores, check out the Albertsons Florida Store List, stores #4401-#4409). After only operating in Florida for 2 years, Jewel-Osco in Florida was over. In a slightly ironic twist, the 7 Florida Jewel-Osco stores were sold to Albertsons in 1992 along with the rest of the Jewel-Osco stores American Stores was experimenting with in the Mid-South and Central parts of the country in areas like Texas, Oklahoma, and Arkansas. The 7 Florida Jewel-Osco stores were rebranded as Albertsons in early 1992, and this lucky one at Largo Mall is still an Albertsons to this day. Also later in 1999, the rest of the Jewel-Osco stores would also be swallowed up by Albertsons when they later purchased the entirety of the American Stores Company, a purchase that also included the Acme, Shaw's and Lucky chains. 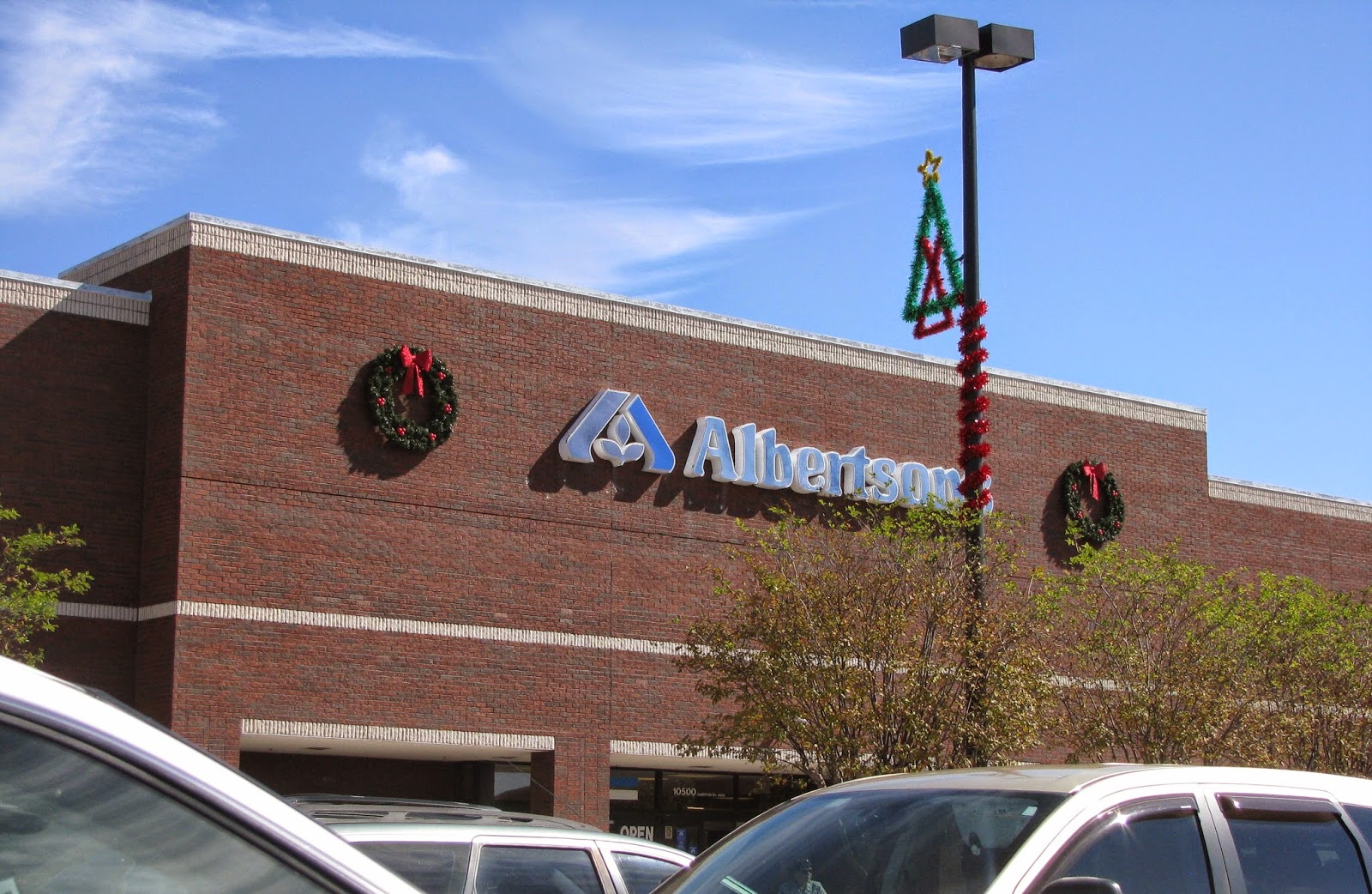 When Albertsons took over these stores from Jewel-Osco, they did very little to the exteriors. The exterior of this store is still original to the day it opened as Jewel-Osco, just given Albertsons signage. I don't know what they did with the interiors after the takeover though, if they left the one from Jewel-Osco or put in the Blue and Gray Market interior of the time before opening. The one thing I do know is that this store currently has the basic version of the Industrial Circus interior from the early 2000's. UPDATE 4/25/15: Apparently, the photos I thought were of the interior of this store were wrong. This store actually has the Blue and Green Awnings interior from the Late 90's.

Definitely a decent crowd here the day these photos were taken. In the satellite image below, the parking lot is also quite packed. For Albertsons to have kept this store as one of the Final Four, it must do some really good business. These Jewel-Osco stores were the largest stores Albertsons operated in the state, and this has been the largest Albertsons store remaining in Florida at over 70,000 square feet since the other remaining Jewel-Osco/Albertsons stores were sold off to Publix in 2008, giving Publix some of their largest stores as well.

This photo across the front gives a decent perspective of just how large and towering this store really is. A small portion of the right side of the store still managed to get clipped off.

Now for a few quick aerials from Bing Maps and Google Earth before we get to the good stuff: 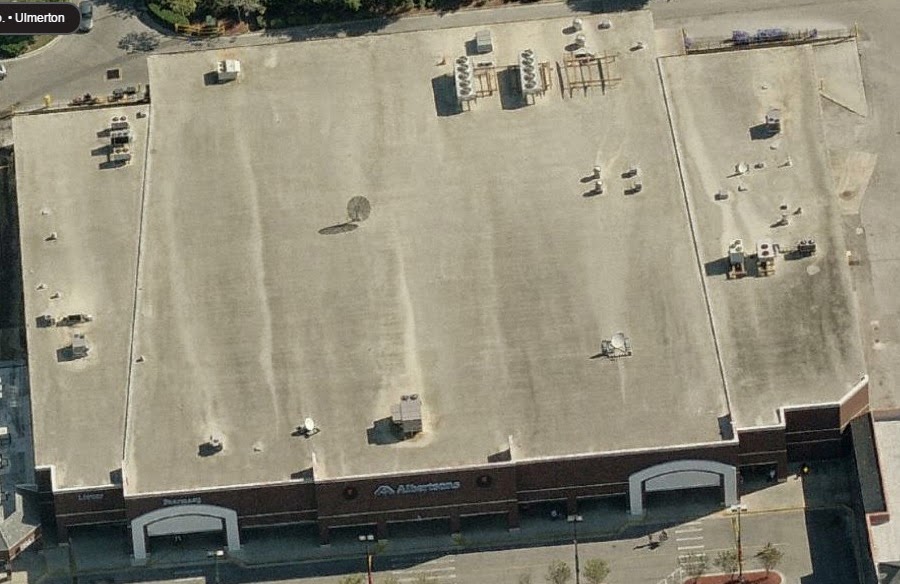 Front Bird's Eye View, also taken during Christmastime since you can see those wreaths in the aerial as well. 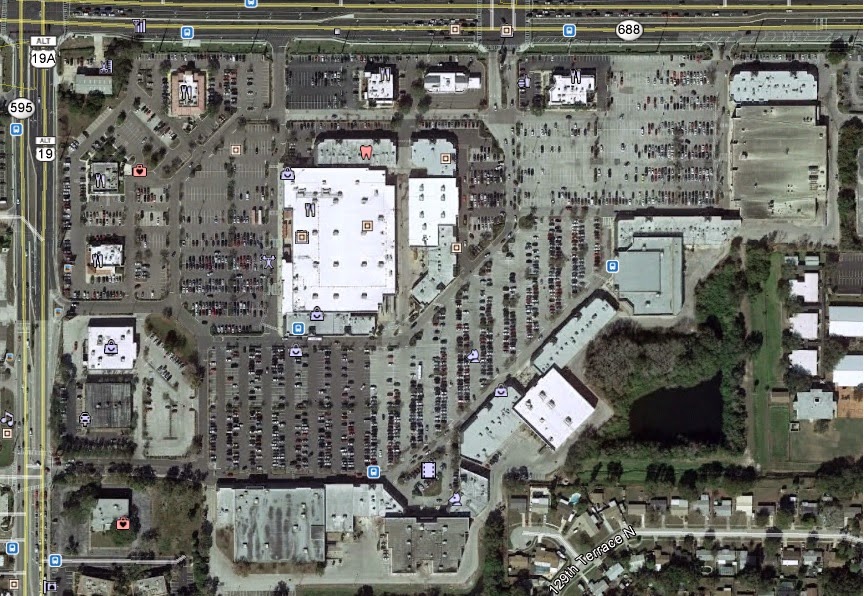 Above is the most recent aerial photo of Largo Mall that Google Earth had, from 2013. The Albertsons is the building in the very top right of the aerial. Just look at that crowd Albertsons is drawing, even with a newish Publix right across the street! I've never seen an Albertsons parking lot with that many cars in it! No wonder this store made it to the Final Four. The Largo Mall is easily one of the busiest shopping centers in Pinellas County. Along with Albertsons, Largo Mall also features Target and Michaels in the center portion, and Petsmart, Bed Bath and Beyond, Marshalls, Regal Cinemas Largo Mall 8, and Bealls Department Store as additional anchors. To see a complete and nicely labeled map of the plaza's current tenant's (better than anything I could create), click here. However, if you're curious to see a complete layout and tenant list of the Largo Mall from 1989, just keep scrolling down... 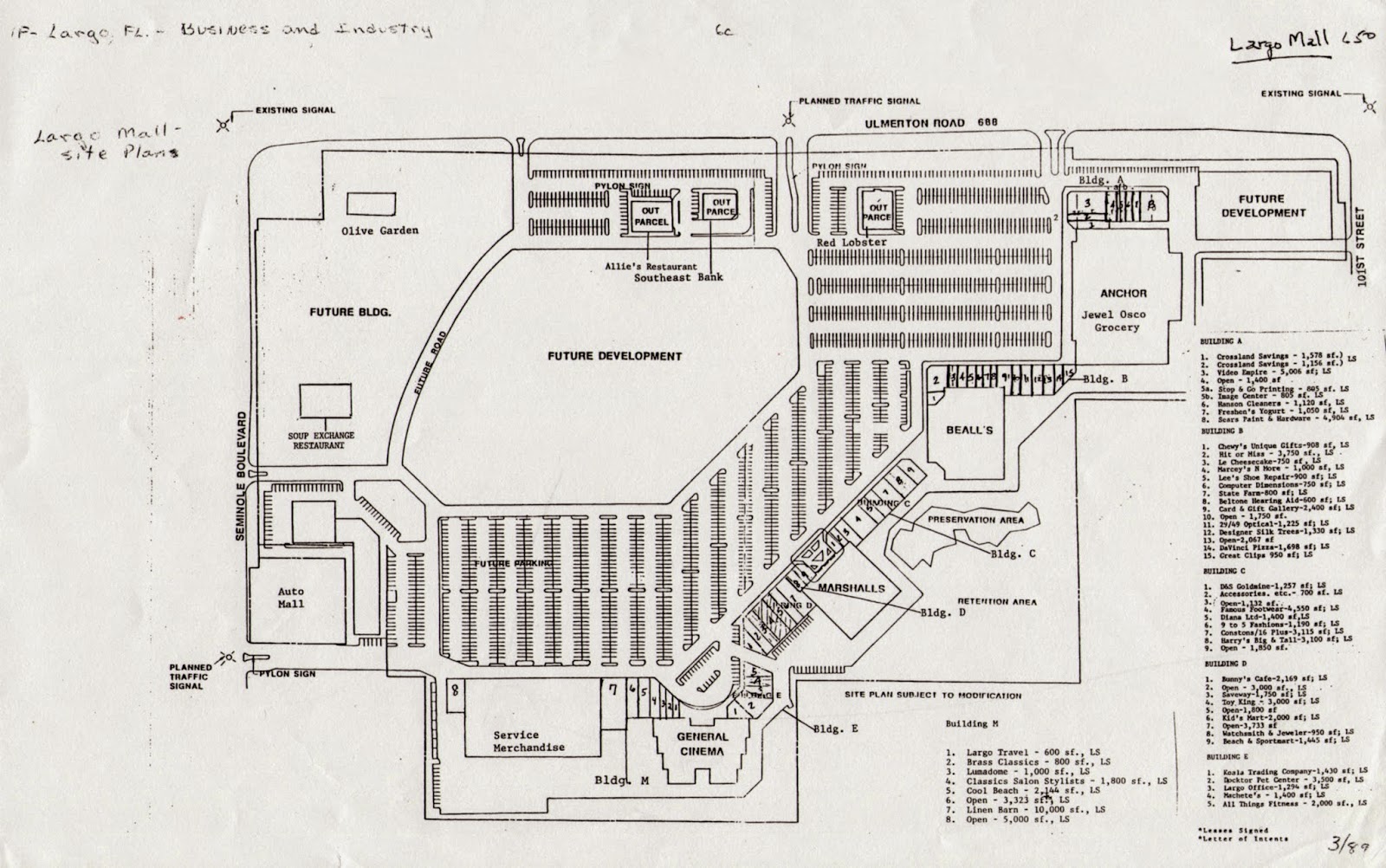 Now the good stuff begins! Adam was able to provide us with this complete map and tenant list of the Largo Mall from March 1989, a month before the Jewel-Osco first opened. Original tenants Bealls and Marshalls still remain in their current locations, Jewel-Osco became Albertsons as we just discussed in legnth, General Cinema is now Regal Cinema, and the Service Merchandise is now divided between Petsmart and Bed Bath and Beyond. BB&B occupies the original entry portion into Service Merchandise and kept their arched glass entryway, although the additional red arches have been removed. The Target and Michaels in the middle wouldn't appear until the early 90's. To see this photo in a larger form for easier reading, just click on it. 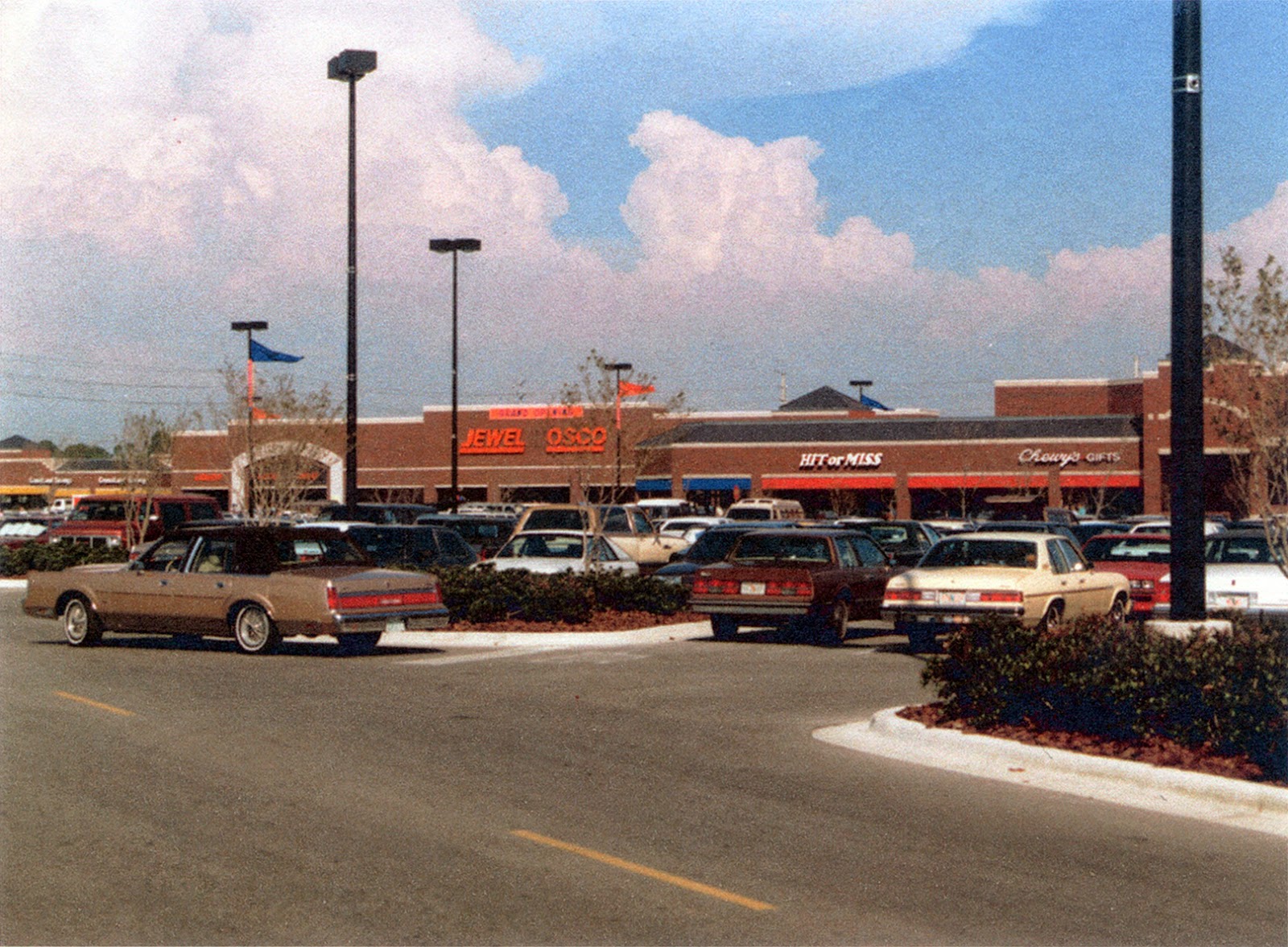 Adam also had this photo of the store as a Jewel-Osco in his archives! This photo was taken during the store's Grand Opening, meaning it probably dates back to April of 1989 or so. This was the first and only photo I've seen so far of a Jewel-Osco Florida store as a Jewel-Osco. I have no idea where he found this photo, but I'm very glad he sent it in! This is a very rare treat! I guess the large crowds as seen in this photo didn't last very long here considering this only lasted as Jewel-Osco for two years before they sold out to Albertsons. 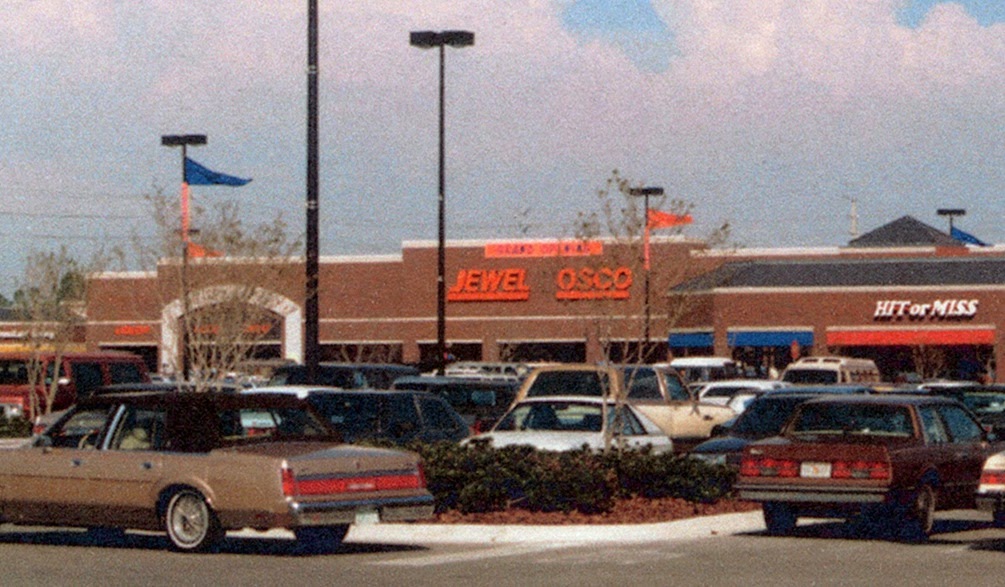 A zoomed in view of the Jewel-Osco building. Like I said before, aside from Albertsons signage, the building still looks the same today. Also there in the photo is an old Hit or Miss store, a now defunct off-price women's clothing chain once owned by Zayre and later TJX Companies (what became of Zayre's other banners, such as TJMaxx, after the namesake Zayre stores were sold off to Ames in 1988). Hit or Miss would end up closing all of their locations in 2001.

Well, for now the Albertsons name lives on over Largo. And behind that faded Albertsons logo the labelscar of its predecessor, Jewel-Osco, also lives on all these years later. If you look closely, you can see the small white holes where it once spelled out 'JEWEL OSCO'. Albertsons, you're going on your third year with only 4 stores in the state. I don't know how or why you're still here, but you are, and apparently doing well if those stores haven't closed yet. Anyway, thanks Adam for sending in these photos and those amazing historical images! As always, photo contributions are always welcome!