Well, it might not look like much at first glance, but what you see in the above photo was former Albertsons #4416. This Albertsons opened in 1994 as a typical early 90's Albertsons, and was shuttered in August 2006 with five other Albertsons stores across Florida not long after Albertsons' Florida division was sold off to Cerberus. In 2008, the renovations you can see above were completed, and this former Albertsons was split between Office Depot and Aldi. However, the very far right side of the main Albertsons building and the Albertsons liquor store (in the far right of the above photo with the blue awning) were never touched when this building was split into Office Depot and Aldi, but we'll take a closer look at that area a little later. There's still some interesting things to be seen over there, but back to the main part of the store for now.

Here's another view of the exterior before we head inside. This photo has a better view of the original section that remains from when this store was an Albertsons. Too bad all of those palm trees just have to get in the way of the exterior photos. Most Florida cities require trees and plants in parking lot islands as a way to beautify them, but all they do is make for a harder time to get photos of these places! Anyway, I guess we'll head into Office Depot first... 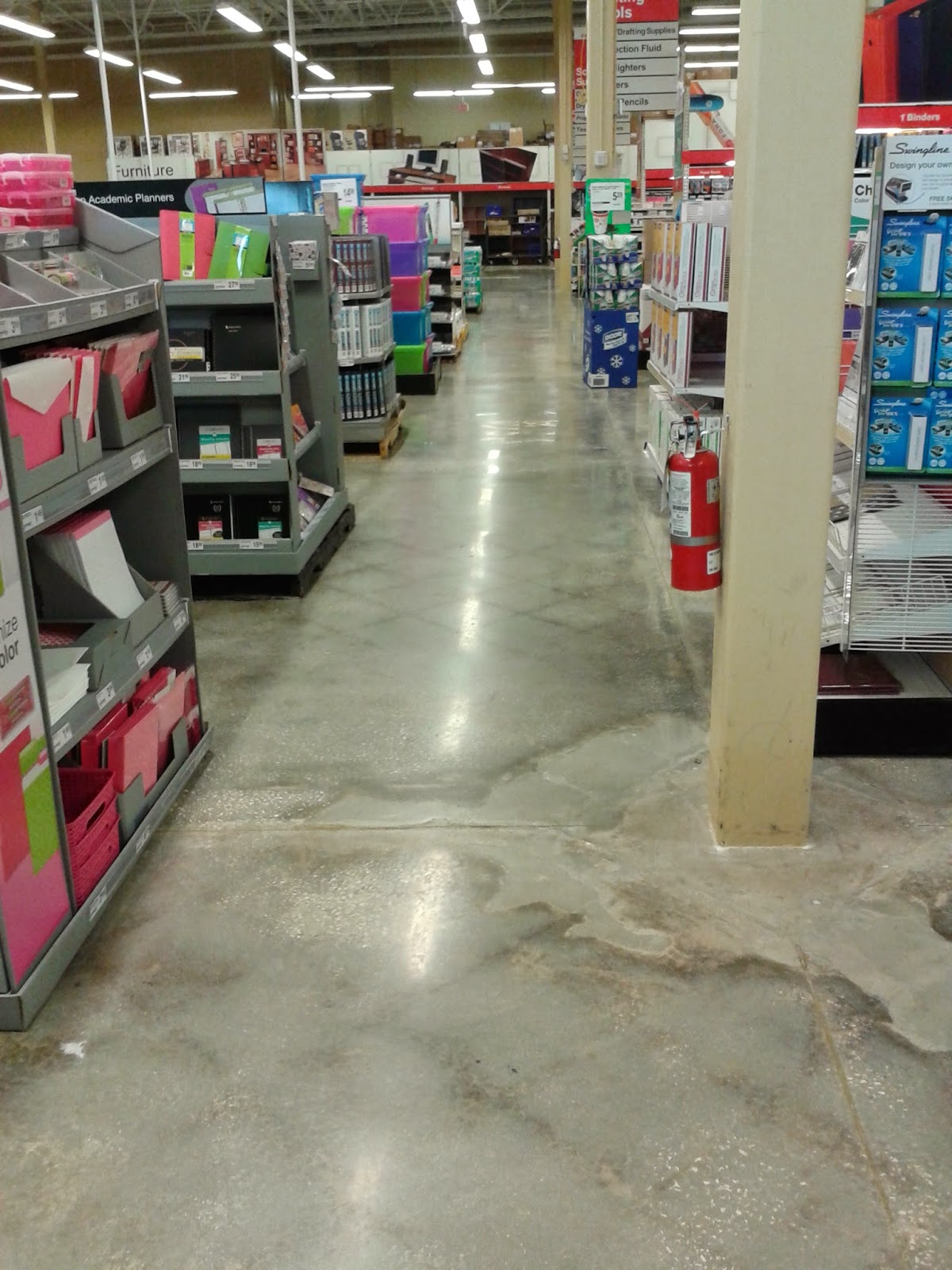 This photo was taken right after walking through Office Depot's main entrance. There's not a single piece of Albertsons left in here. They really did a thorough gutting when Office Depot and Aldi moved in. As soon as I walked in here I knew I wouldn't find much. First of all, this store would have had a drop ceiling as Albertsons. Albertsons didn't start using a warehouse ceiling until the Plaza Model came out around 1998. Also, Albertsons would have had a tile floor. If you look closely at the concrete floor in these Office Depot photos, you can see the diamond shaped marks where Albertsons' floor tiles would have been before they were ripped out. In Albertsons days, this photo would be pointing down the grocery aisles toward the dairy department, which was along the back wall straight ahead. 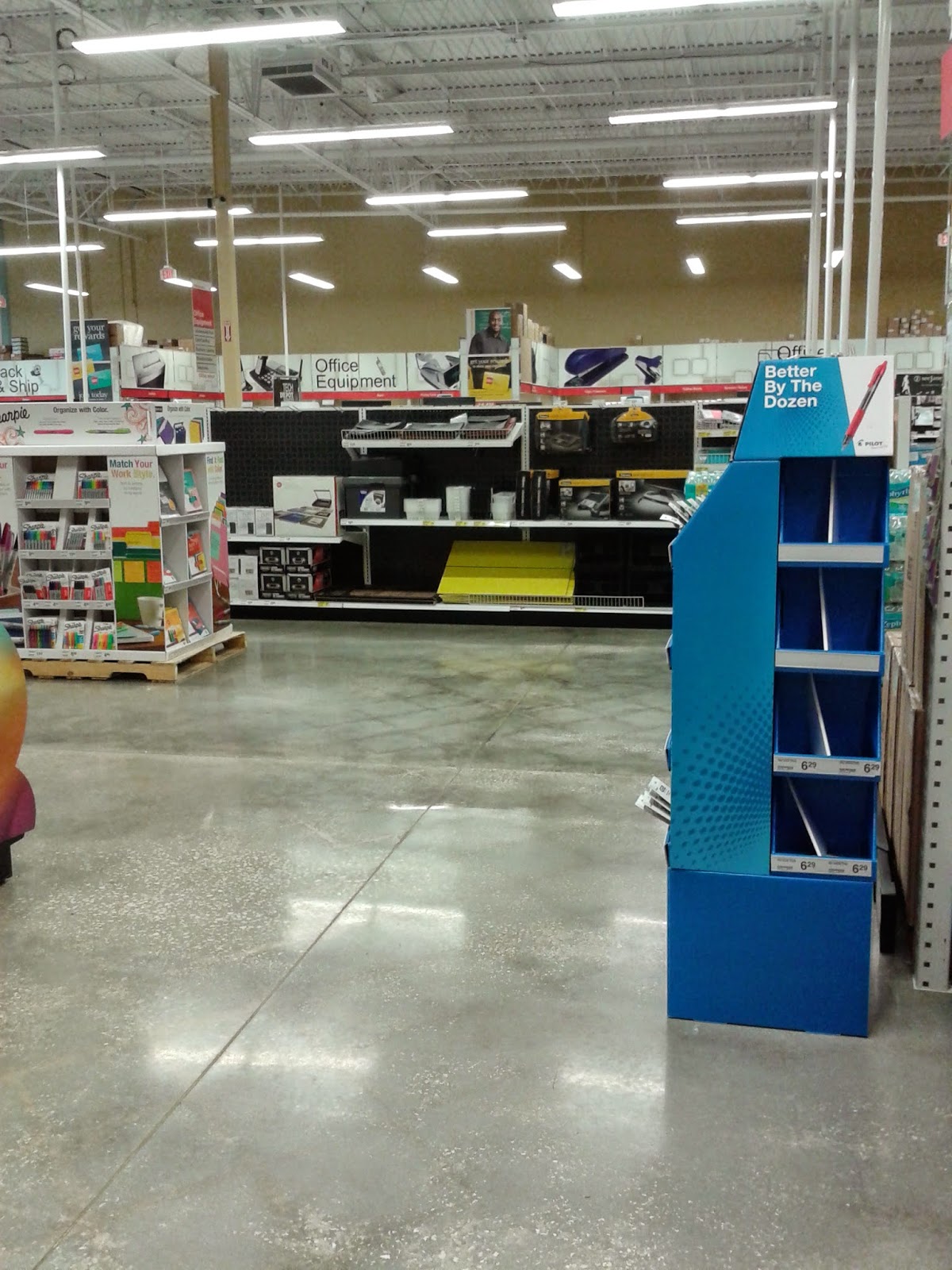 Looking from the right side of the Office Depot to the left. Albertsons Pharmacy would have been to the left along that side wall, with Health and Beauty straight ahead of me, and the Meat & Seafood counter would have been off to the right in the back left corner of the building. The warehouse ceilings in here and over in Aldi seemed unusually high to me. I don't know if it was just me of if it was because the original drop ceiling was removed, so the original roof went higher than in stores built with warehouse ceilings. 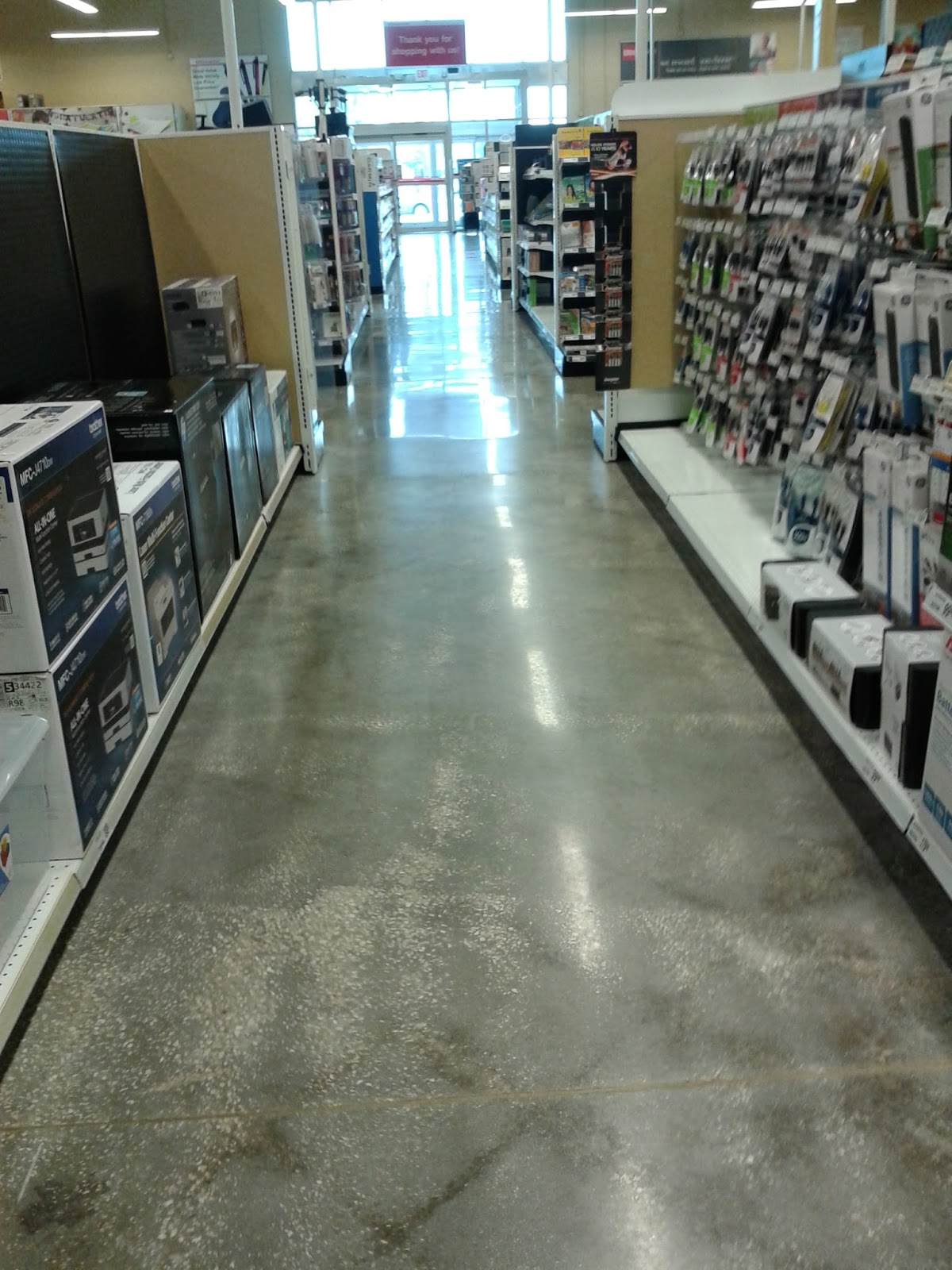 One last look inside Office Depot before heading back out. 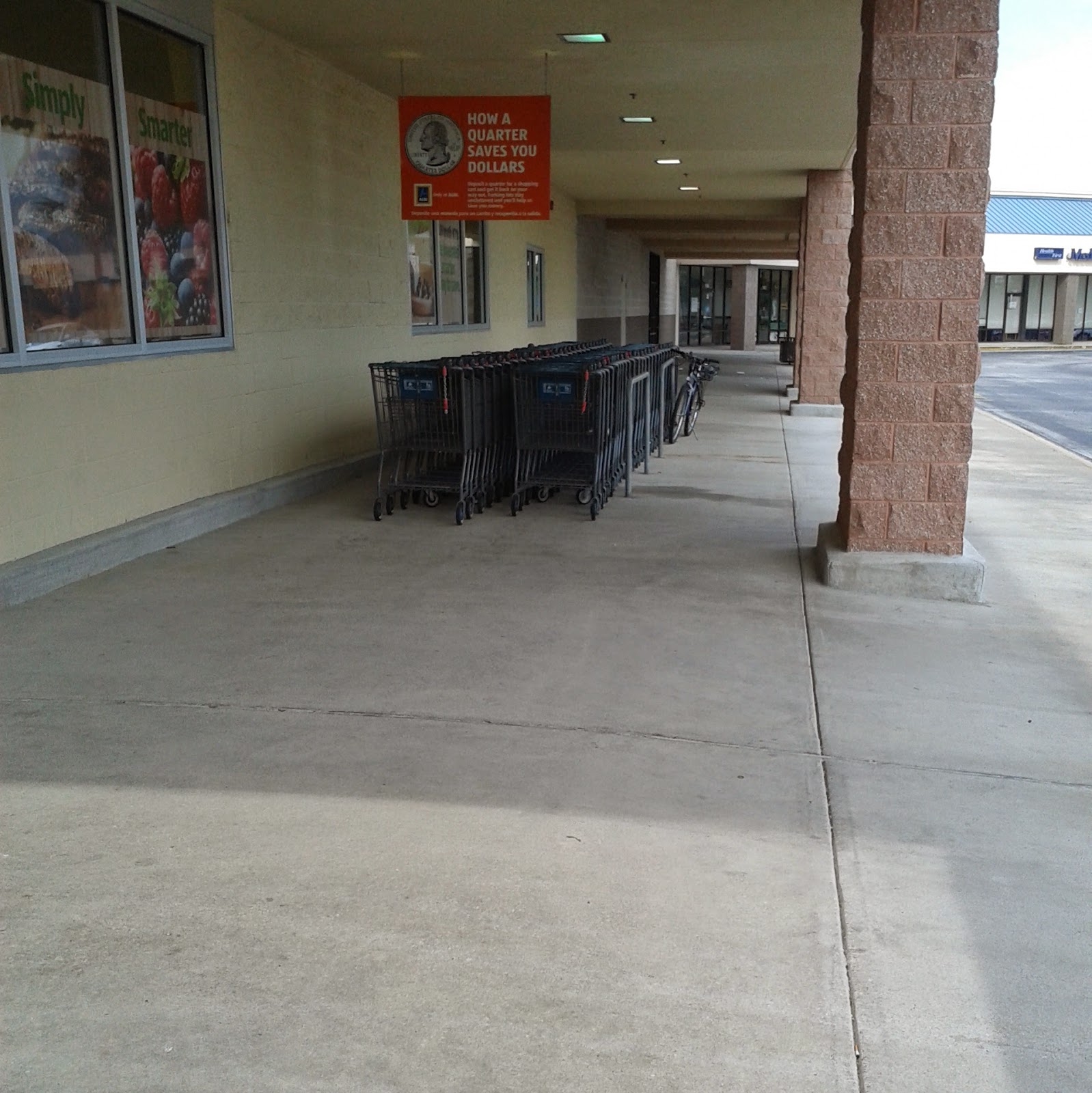 Now back outside heading toward Aldi, whose entrance is to my left in this photo. Albertsons main entrance and exit would have been approximately located behind where Aldi's carts currently are. Now let's go inside Aldi... 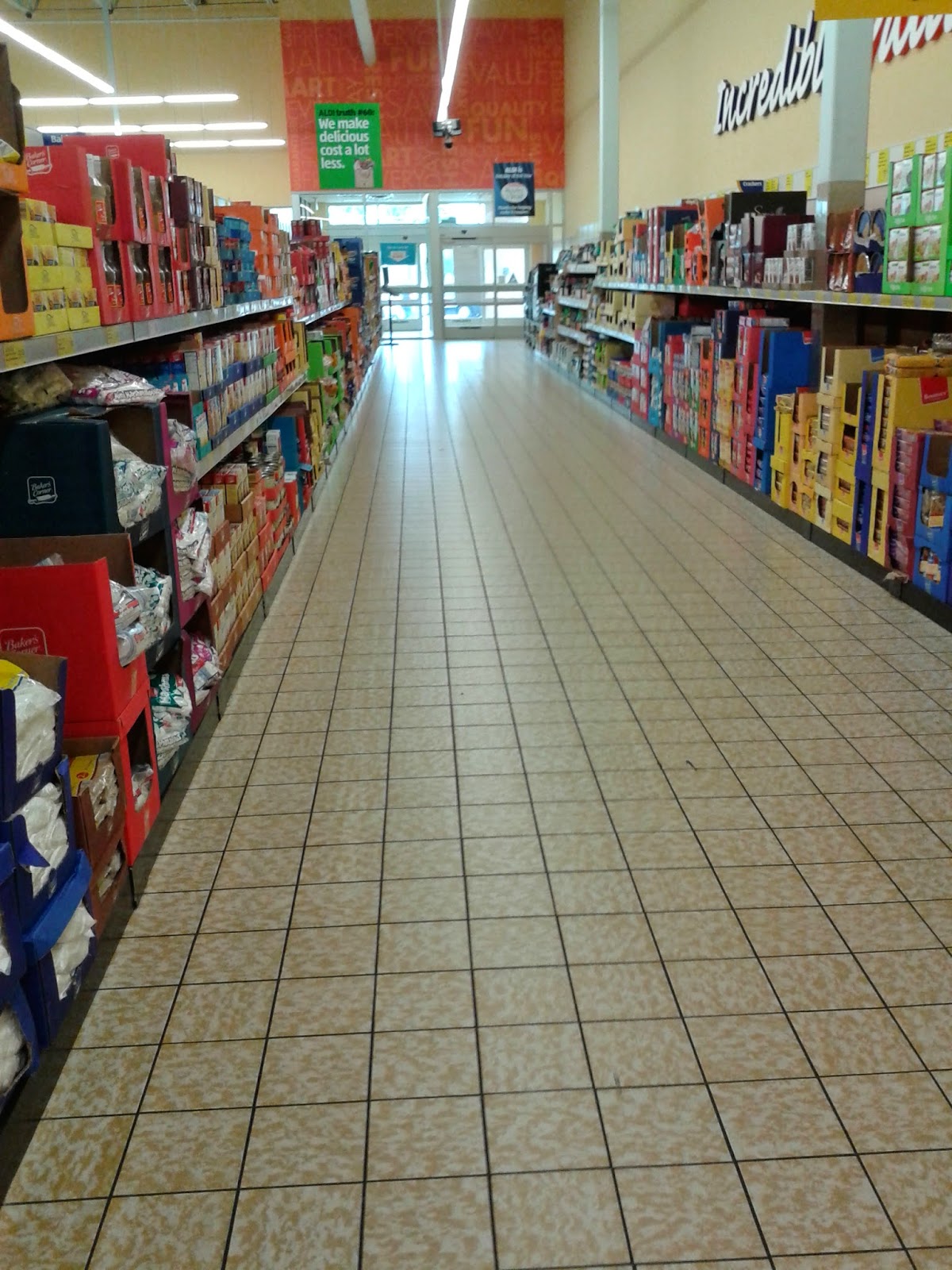 As with Office Depot, not a whole lot of Albertsons to see in here either. Completely gutted and remodeled. I promise you though, things will get much more exciting here in a moment, so don't change web pages just yet! 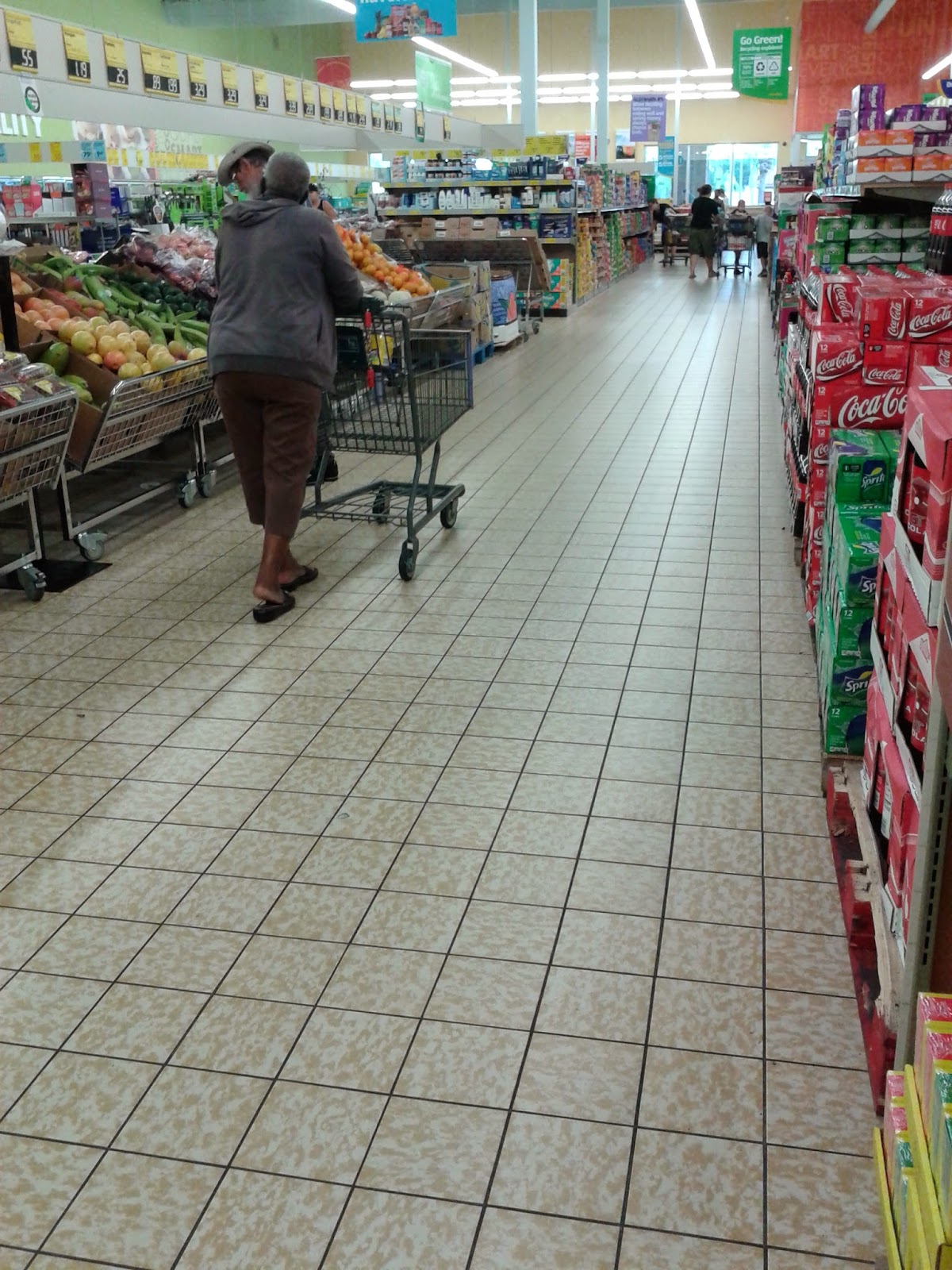 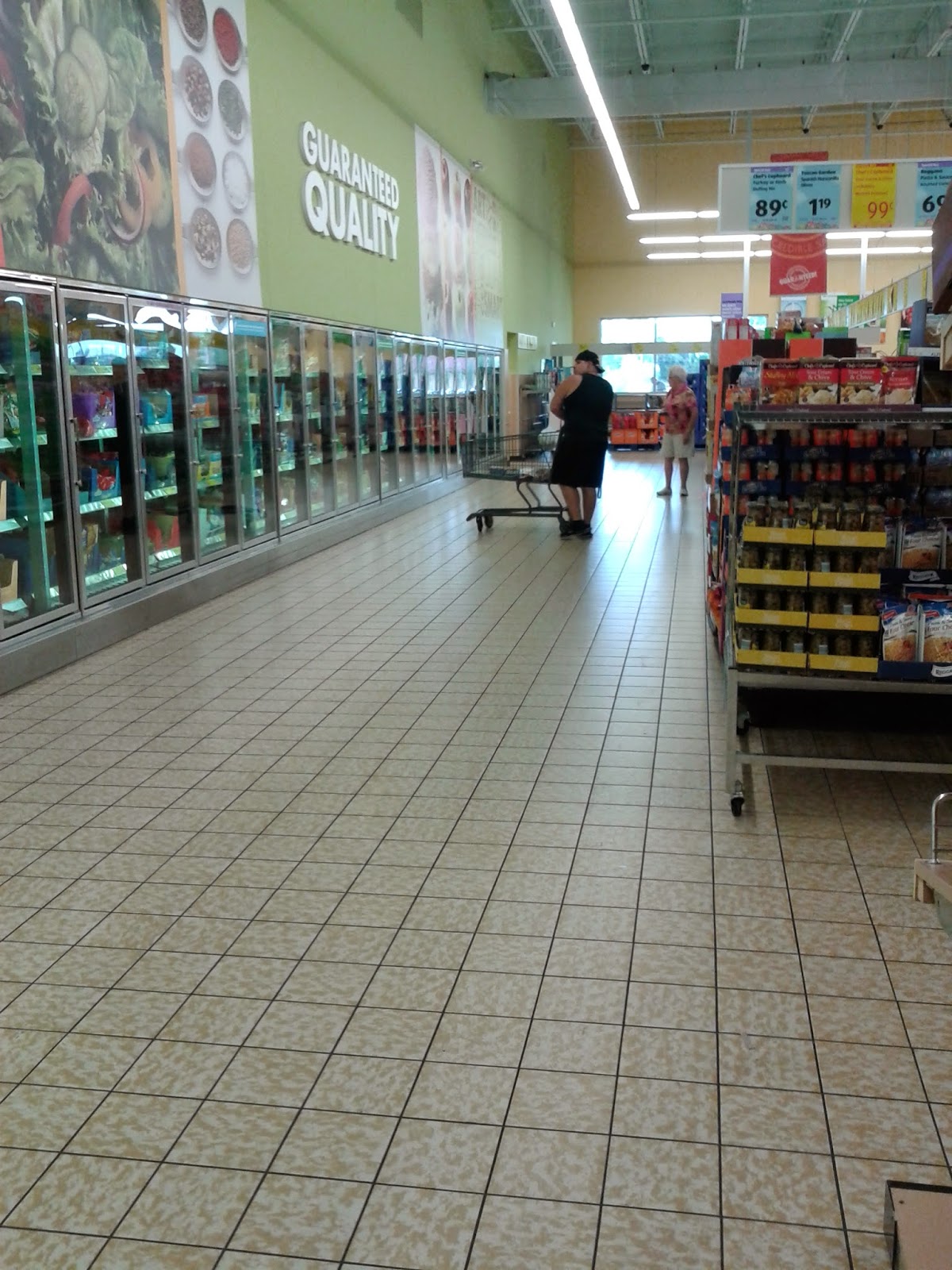 Just one last shot from inside of Aldi before heading back out. Aldi doesn't quite take up the entire right half of the Albertsons building. Behind that wall to the left is still an abandoned piece of the Albertsons, where the bakery, deli, and produce departments would have been located. 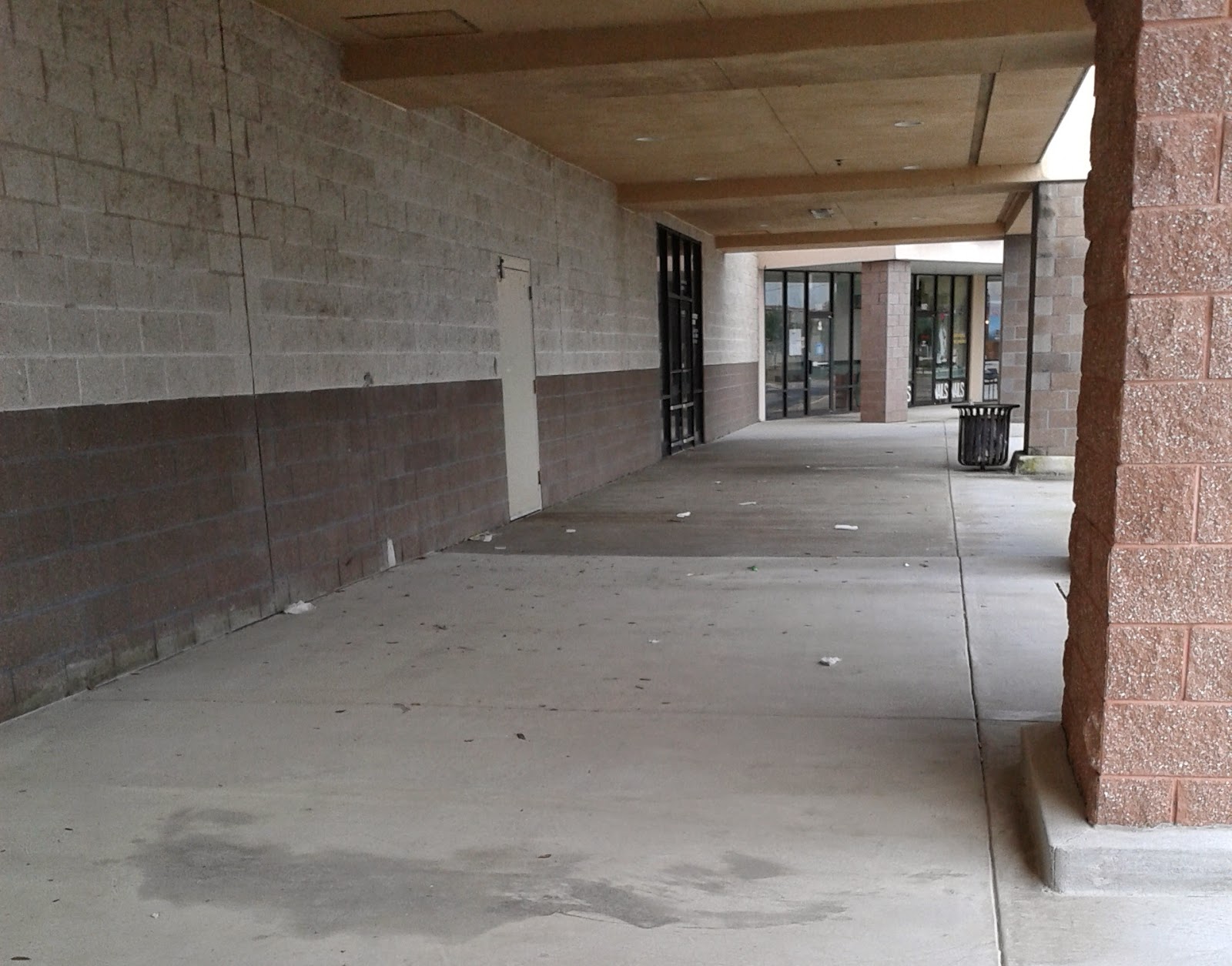 Now walking back out of Aldi and toward the abandoned Albertsons liquor store, which is behind that first set of glass doors up on the left. What you see here is all original to the Albertsons. Behind that emergency exit door is that last abandoned piece of the main Albertsons store that Aldi never took over.

This is what that last remaining piece of the original store looks like from the exterior. The architecture and all of that blue trim still says Albertsons all over it.  Back to the liquor store... 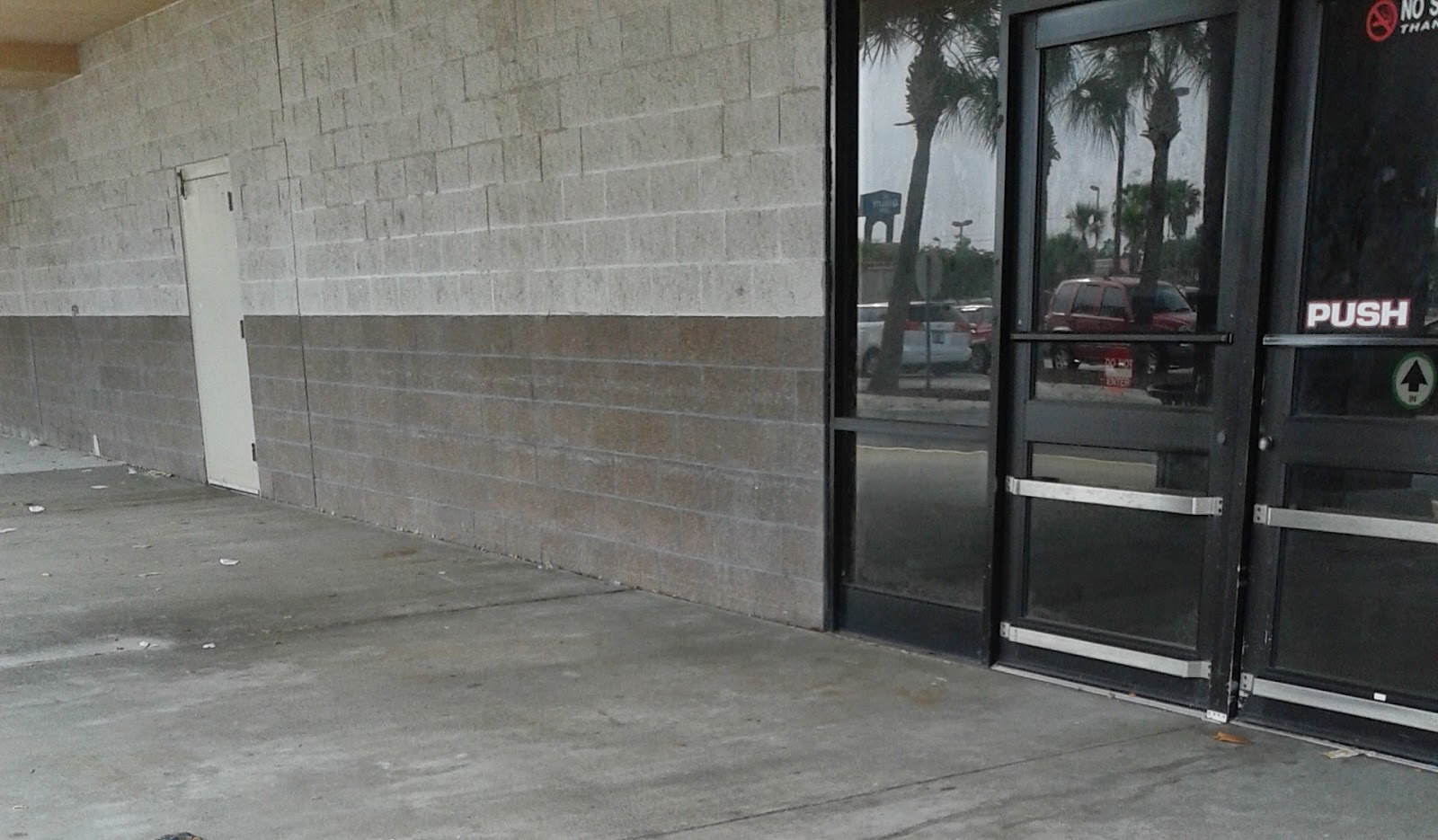 Looking back in the direction toward Aldi and the emergency door from the Albertsons liquor store. 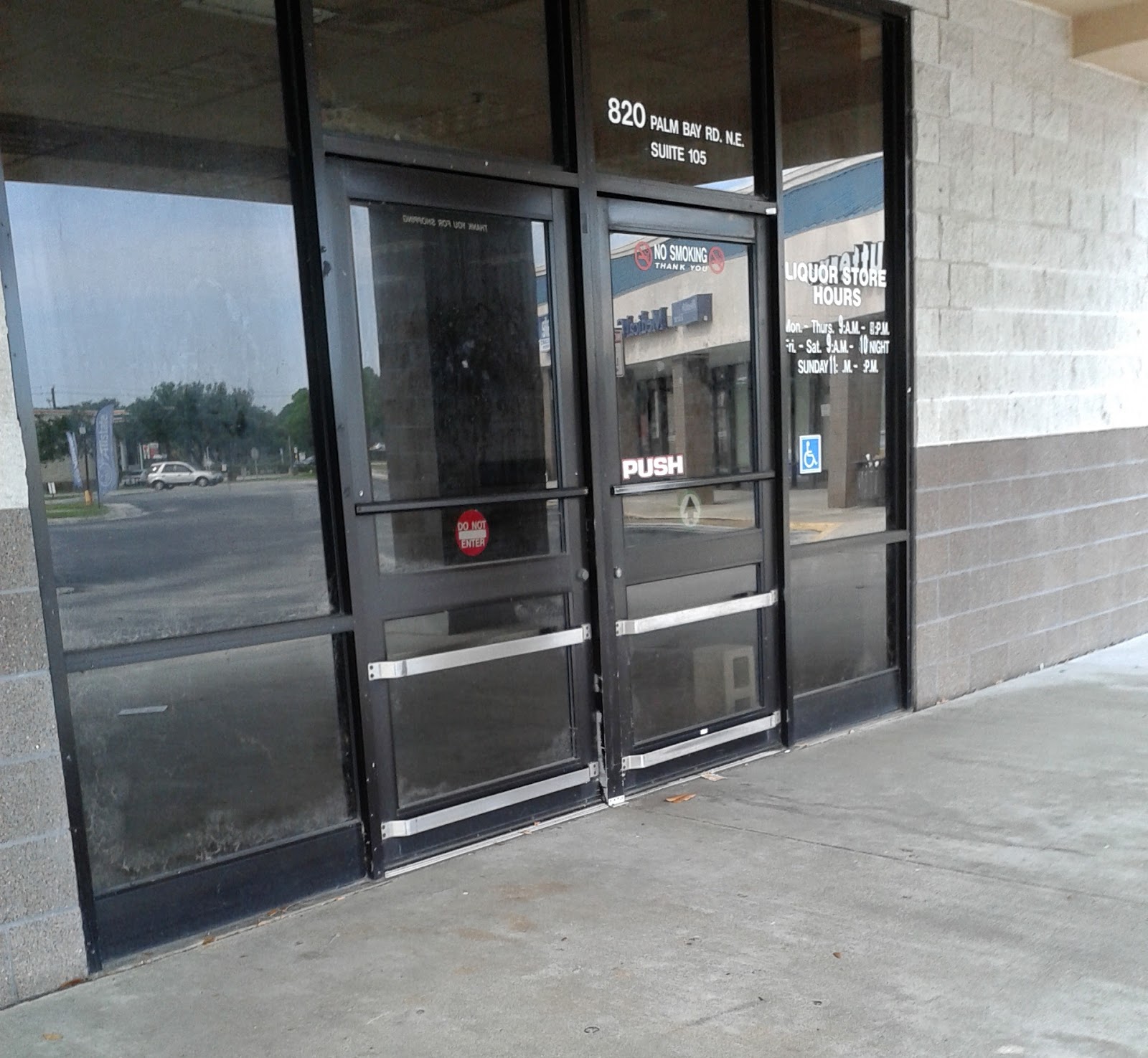 The entrance to the old Albertsons Liquor store, which has been abandoned since 2006. This is where this post starts to get really interesting. 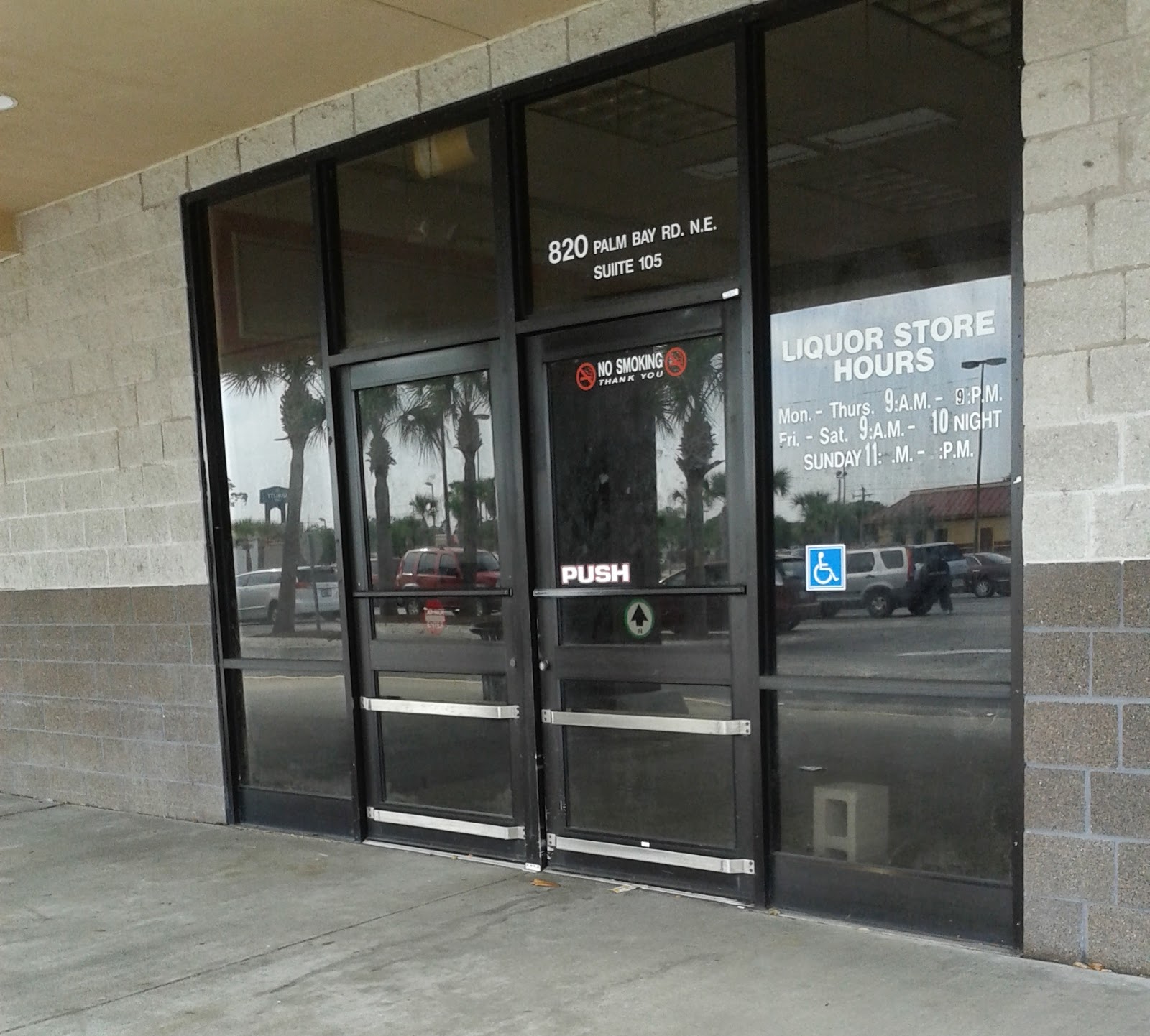 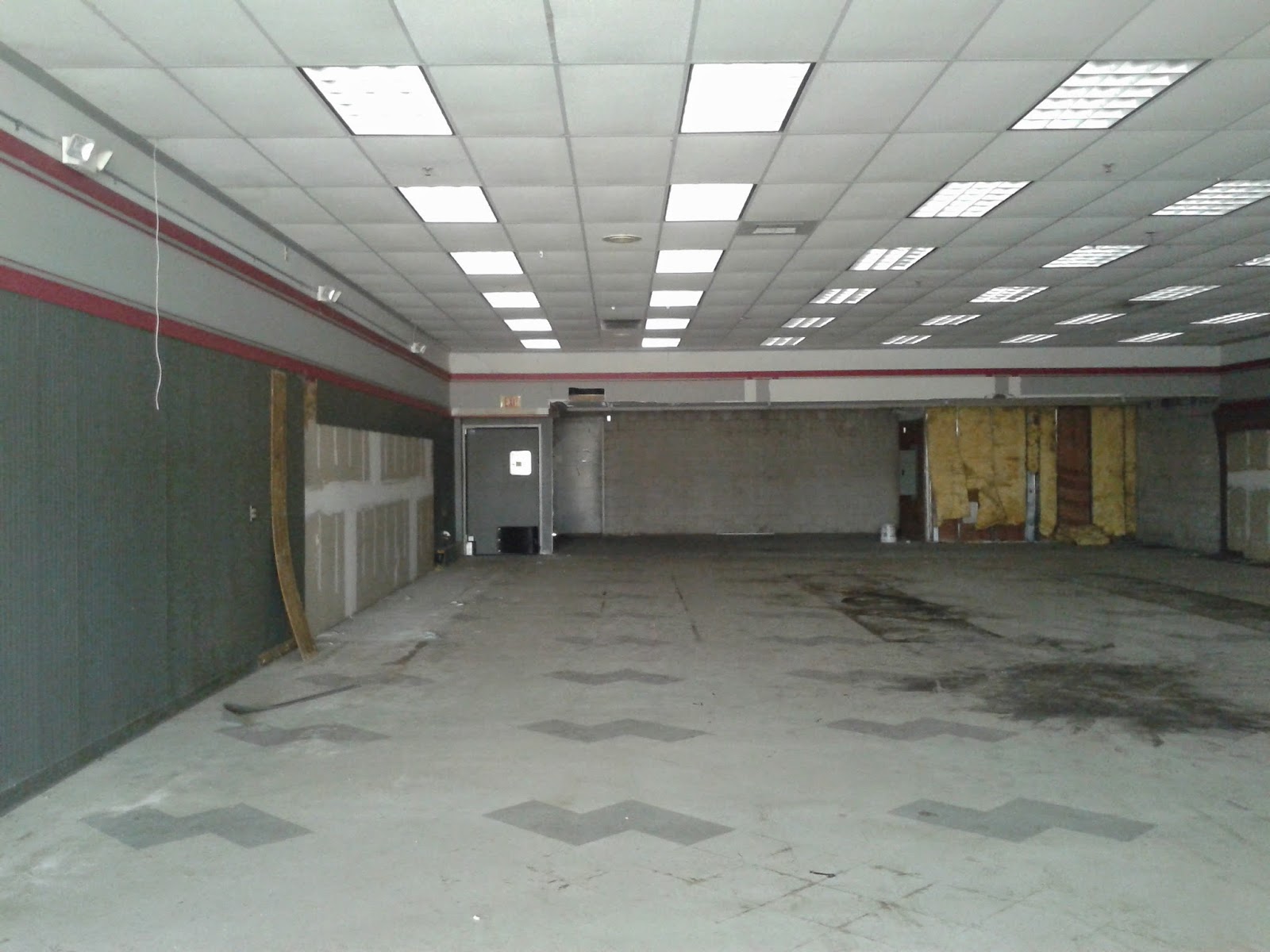 It's the Blue & Gray Market interior! (I told you this post was going to get much more exciting.) Well, it's a stripped out version of it anyway. There would have been blue lettering along the walls when this was still open, located in that white area between the two pink stripes. Also, that pattern in the floor tiles is a dead giveaway of the Blue & Gray Market interior. All the way in the far back would have a row of glass door coolers for beer, and you can see the marks on the floor where the aisles for the wine and liquor would have been. The far right wall would have been another set of coolers.

Before we head off into satellite imagery, I was able to find one historic photo of this store from when it was still an Albertsons:

It's not the greatest photo in the world, but you can still make out the general look of the original building. 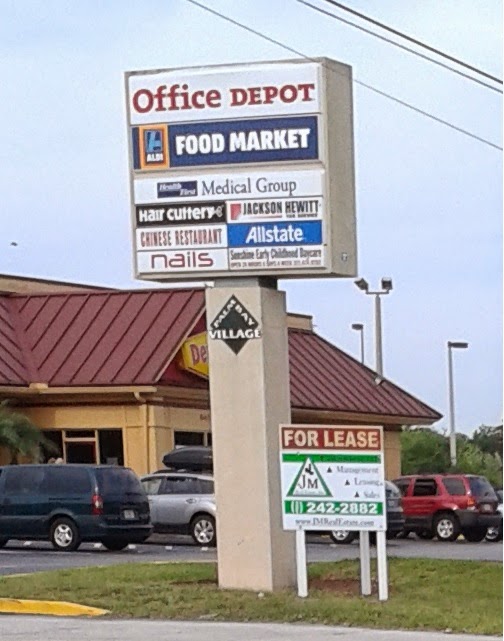 And just a quick glimpse at the road sign. This is the main sign facing Palm Bay Road, and it's a modified Albertsons style road sign. 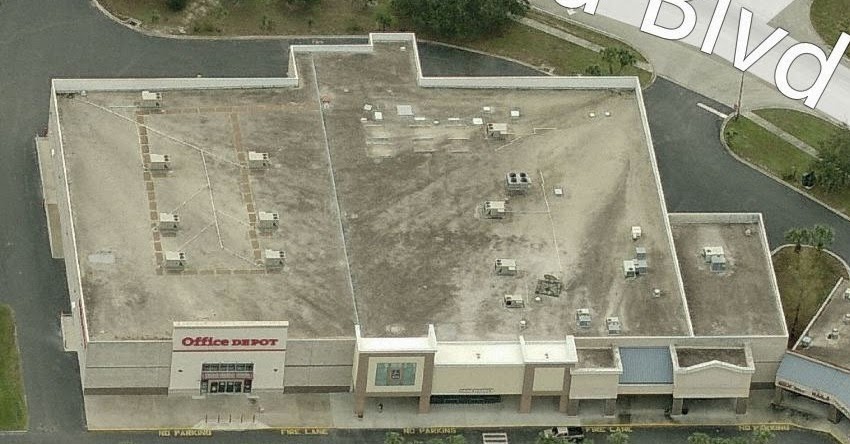 Front - You can clearly see the dividing line between Aldi and Office Depot here. 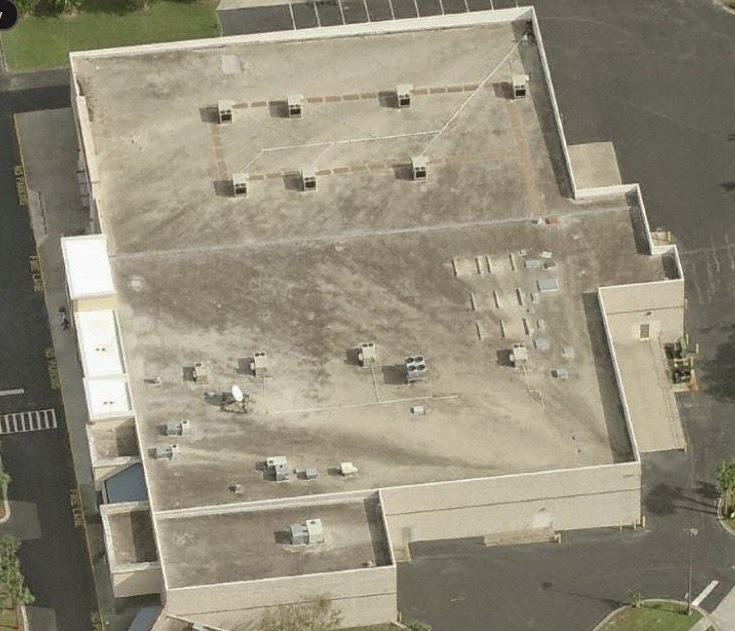 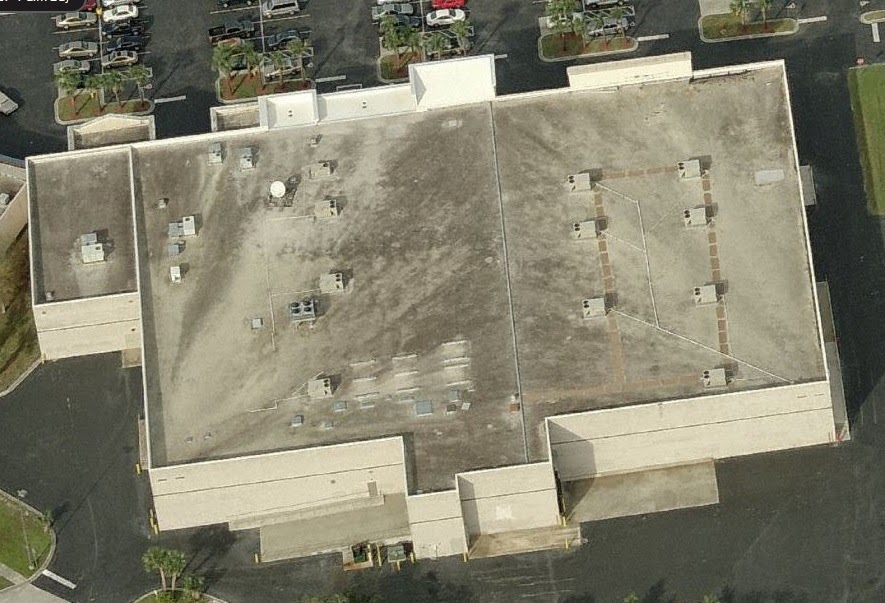 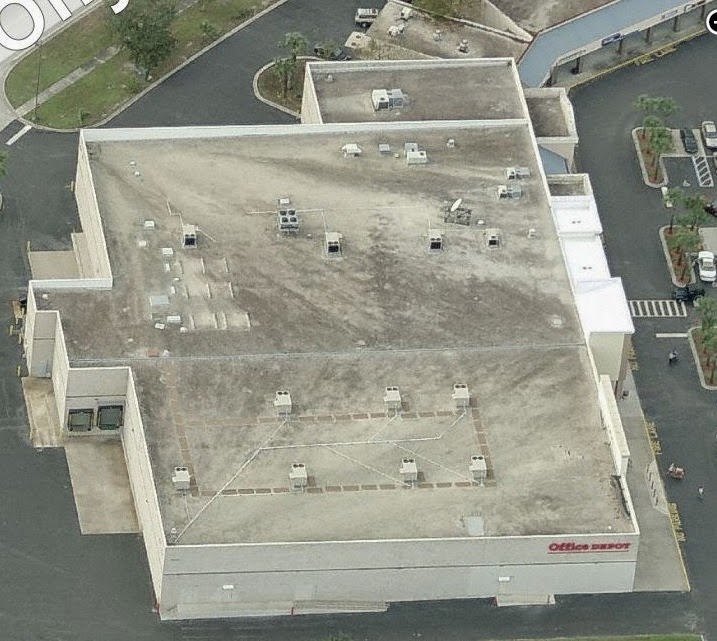 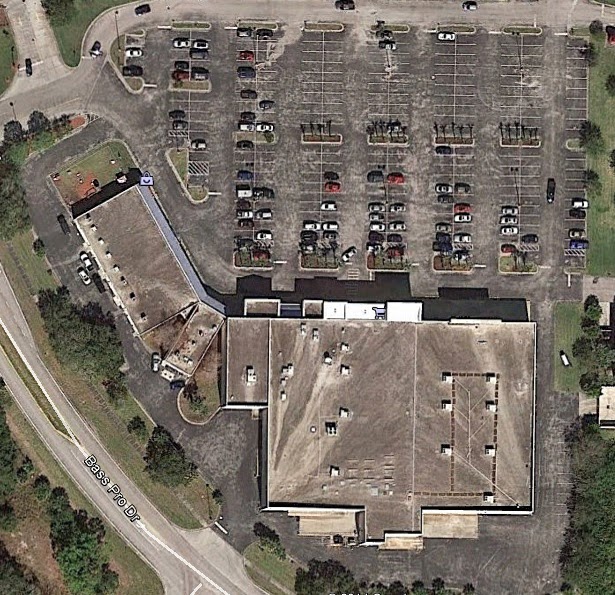 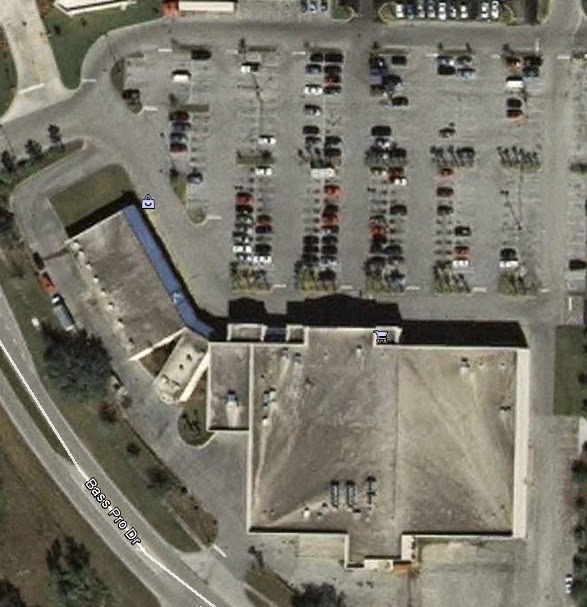 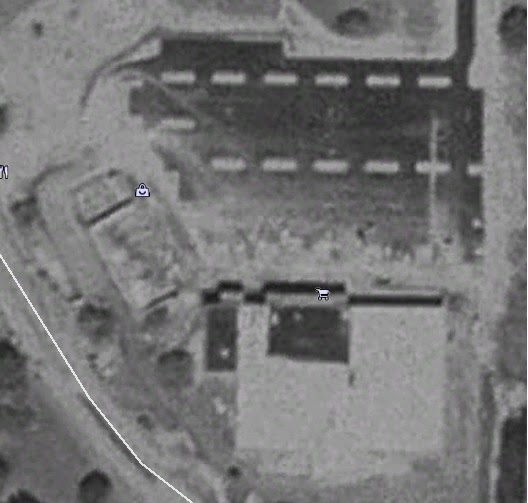 Here's something pretty interesting, the store is still under construction here - Future Albertsons #4416 - 1994

Just one last look at Former Albertsons #4416, and the accompanying shopping center before I finish. It's amazing how even in a store that looks to be renovated beyond recognition, there's still something from it's past life to be found.

Well, I guess that finishes today's post. Until next time,

December 23, 2022 - Rowe’s to Retain IGA Banner Under New Owners – By Mark Hamstra in Supermarket News – The Albertsons Florida Blog's coverage of Rowe's IGA was referenced in this article