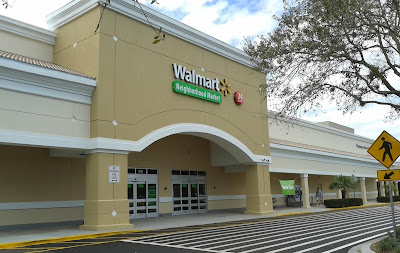 And now, the highly anticipated conclusion to the story of the St. Lucie West Albertsons...

Way back when, I remember one time when I was in this store. I was standing near the pharmacy counter for some reason, just looking around. Even back before I started this blog, I knew Albertsons wasn't in a good place. I looked around and thought to myself, if anything ever happened to the mighty St. Lucie West Albertsons and it did close like many of the other Albertsons stores were around the state, what would eventually move into this space? Even though everyone thought of this store as indestructible back then, I knew "it" was going to happen eventually. So, it was then that I made my prediction of what the fate of the St. Lucie West Albertsons would be when the store closed. And I couldn't have been any more wrong as to who the new occupant would be (I would have never guessed Walmart back then!). My original prediction was that this store would be split between an Aldi and Big Lots after Albertsons left (although you have to give me some credit - Aldi did eventually build a new store across the street from here!).

Not that some goofy prediction I made nearly 6 years ago means anything, but that was just my thought process back then. As I've mentioned many times in the past, the mighty St. Lucie West Albertsons finally conceded on June 9, 2012 when Albertsons cut their Florida presence from 17 stores down to 4, after a rather strong (yet somewhat short) 12 years in business. This store then sat empty from the time Albertsons closed in 2012 until June 2015, when Walmart announced that they would be opening a new Neighborhood Market in the majority of the former Albertsons space, after their original plans to open a Neighborhood Market on a vacant lot across the street fell through. After 9 months of construction, the new St. Lucie West Walmart Neighborhood Market held its grand opening on March 2, 2016. Even though I knew that not much from Albertsons would remain once Walmart opened, I was still curious to see the final product. Before I get too far into this post, if you would like more background on the St. Lucie West Albertsons, you can check out the two posts I did of this store previously, from back when it was still abandoned and from when Walmart first began construction, by clicking the appropriate links.

While it looks like Walmart didn't do too much to the exterior of this store, they actually did a whole lot! Even though the archway over the entrance looks exactly like the one Albertsons had, it's actually brand new, and shifted over to the right from where the original arch was. Walmart essentially built an exact replica of an early 2000's Albertsons exterior for their new entryway, which I still find pretty odd, but it serves as a fitting tribute to the building's past. At the very end of this post you'll be able to see the how the arches from Walmart and Albertsons are not the same. 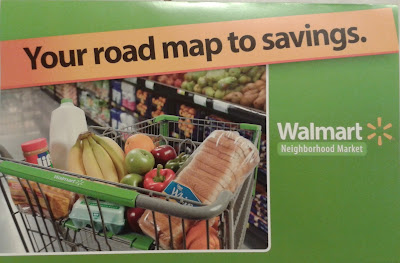 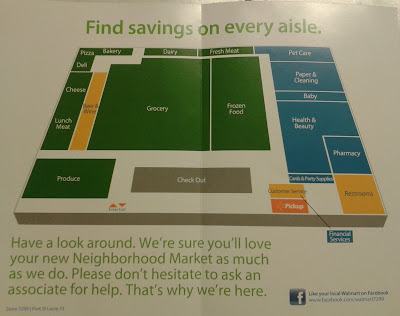 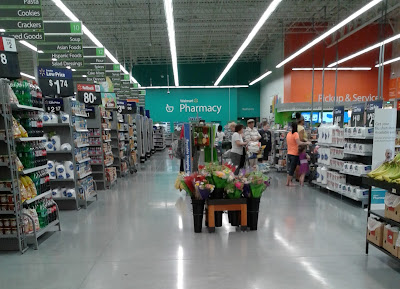 Like I said before, just about every trace of Albertsons and its old Theme Park/Grocery Palace interior has been stripped away for Walmart to essentially rebuild the interior of this place from scratch. As far as Walmart interiors go, I will say the new Walmart Neighborhood Market look is much nicer compared to the old "Cheap Impact" version that has finally been phased out. This new look for the Neighborhood Markets was rolled out at the same time Walmart rolled out their new "Black Decor 2.0" for the Supercenters. Both of these new Walmart decors are Walmart's attempt to bring more a more modern feel and features to their stores after 8 years of Project Impact, which has finally run its course. 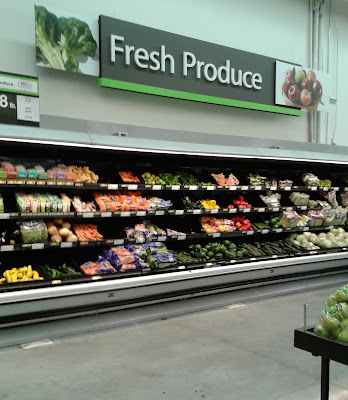 You immediately walk into the Produce department when you first enter the store. This picture also gives a glimpse at what the new Neighborhood Market department signage looks like. Behind this wall is an unused 10,000 square foot portion of the former Albertsons that Walmart didn't want. The unused portion of the former Albertsons was home to the deli, produce, and bakery departments. I don't know what will eventually become of that space, but it is currently for lease. The only access into that space right now must be though the back of the building, because out front the only opening into that space was occupied by a windowless fire exit door that can't be opened from the outside. 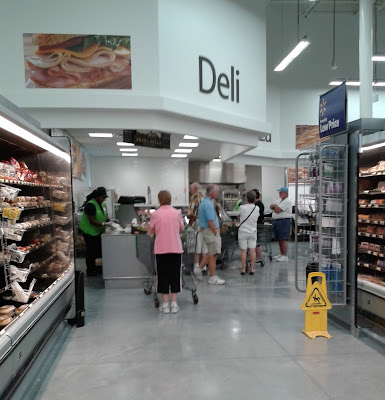 Moving along into the back left corner of the store, home to the deli, bakery, and pizzeria (more on the pizzeria shortly). This Neighborhood Market actually had a decent sized deli and a fully functional bakery, unlike the extremely tiny deli and non-existent bakery at the South Orlando store I mentioned earlier. 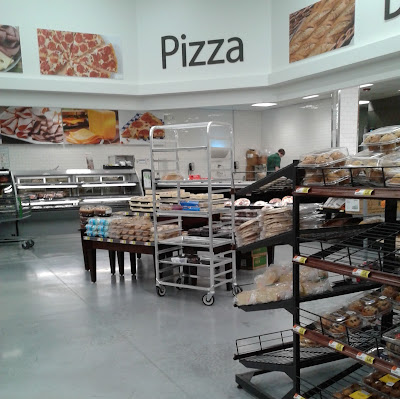 The decor for the deli/bakery/pizzeria is essentially the same as what used in the Supercenter's "Black Decor 2.0", except the department symbols aren't used in the Neighborhood Markets. However, a deli department in this building just doesn't feel the same without a giant spinning fiberglass chef above it. Anyway, the Pizzeria is another new feature that Walmart has recently rolled out. It's a special department where they offer a variety of freshly made take-and-bake pizzas, which you can buy either pre-made from the case out front, or have one custom made by the attendant behind the counter. They actually looked pretty decent too. This department is a good way for Walmart to offer something in the fresh/prepared foods area without having to do anything too elaborate or gourmet. 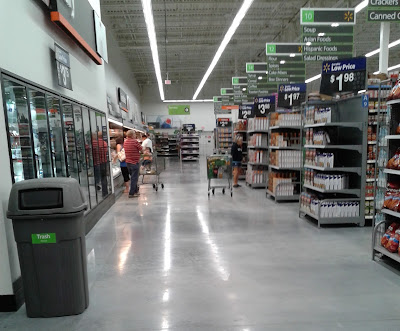 The back wall of the store. This is looking from approximately where the old Meat and Seafood counter was toward the Meats & Poultry alcove and Frozen Foods. If you're slightly confused about how this store was laid out back in the Albertsons days, the original post of this store featured a diagram of Albertsons' original layout, which you can view here. 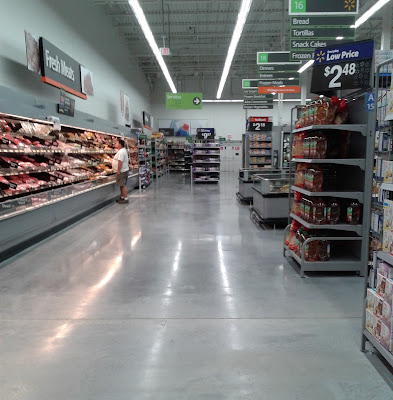 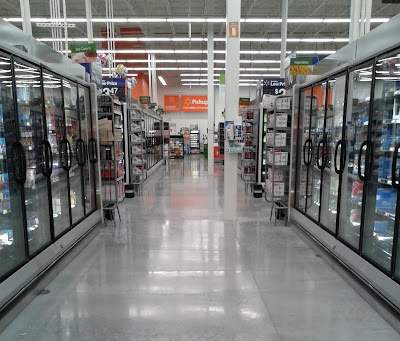 Walmart's Frozen Foods aisle, which lacks a cheese grater style ceiling with the typical pieces missing from it. 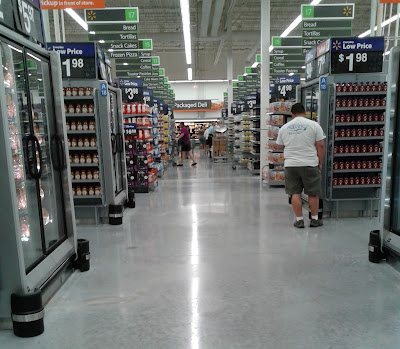 This center aisle runs the entire length of the grocery department. This was taken looking toward the left side of the store. 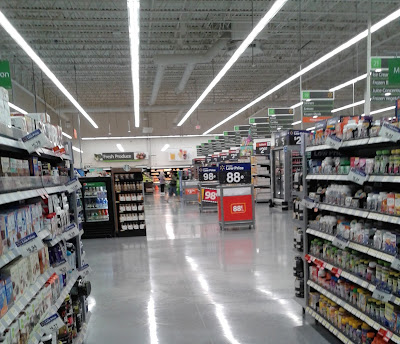 Looking across the front from near the pharmacy. 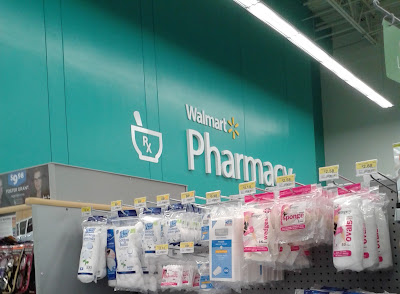 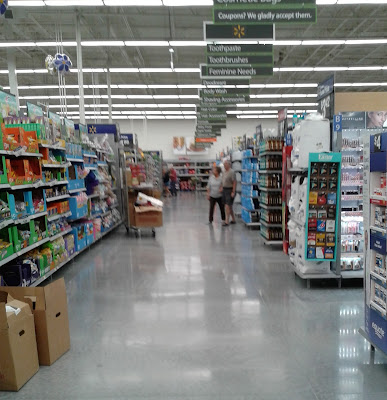 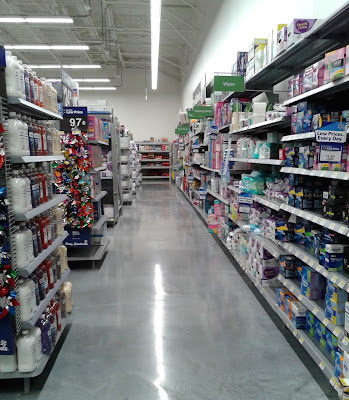 Looking down the right side wall toward the back corner. The majority of the General Merchandise departments are located in Albertsons' old Frozen Foods department. 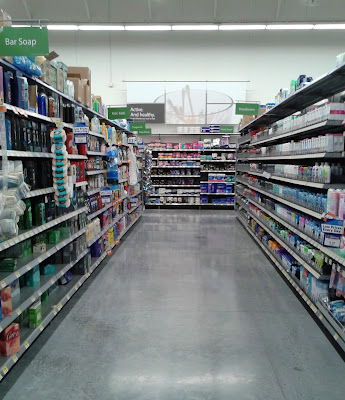 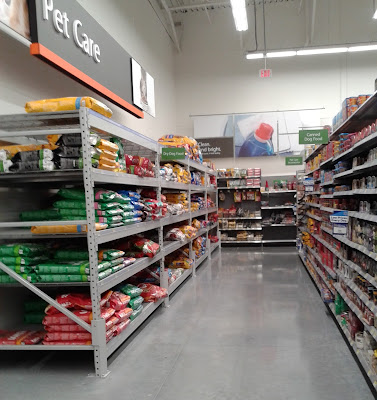 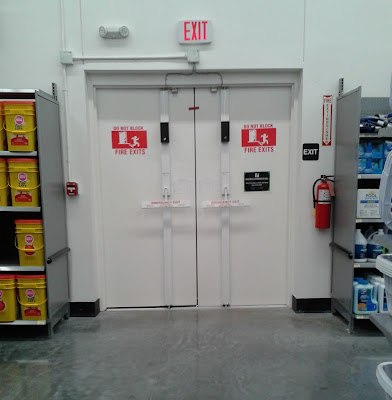 Although Walmart-ified, this fire exit door is the only thing in this place that remains from Albertsons. This door was located on the right side wall where the dairy alcove transitioned into Frozen Foods. 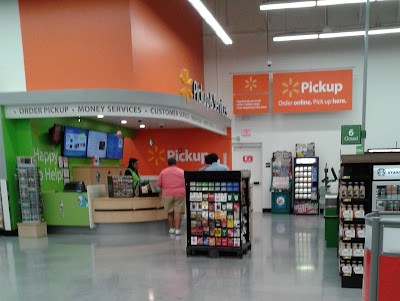 Heading back up front to the "Pickup & Service" counter. The bright orange pickup counter has also invaded the Neighborhood Markets as well, it seems. Also, that fire door in the background also remains from Albertsons. That door was located at the end of a hallway located in front of the registers, between the old Video Department and the mysterious unused cafe that sat empty for practically as long as Albertsons was open (although this store did have a Starbucks kiosk near the front entrance when it first opened). 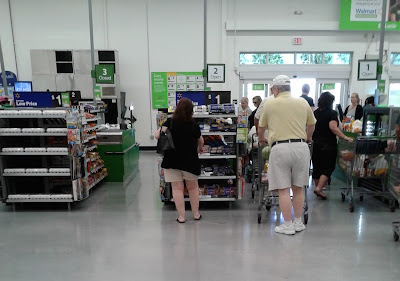 Walmart's registers. Something new Walmart has rolled out with the new Neighborhood Market decor is that instead of using register lights, they instead use signs that the cashier flips to read either "Open" or "Closed", probably to save money on energy by not using a lightbulb. Interestingly, Albertsons had a similar system in place at this store in the early 2000's, where the cashiers had a sign they had to flip to say "Open" or "Closed" taped to the back of the old register monitors. 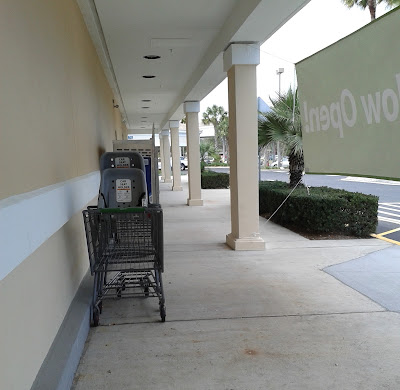 Heading back outside to the front walkway. This is the only area that Walmart didn't touch during their renovation.

And as was mentioned in the Update post on this store from September 2015, the old Albertsons Liquor store was torn down so Walmart could install a drive-thru lane for their pharmacy. 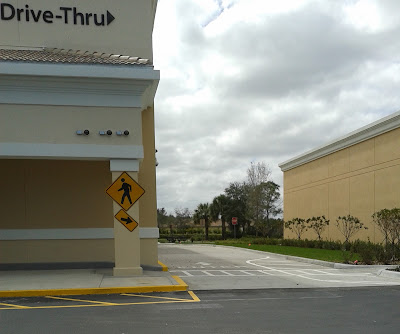 The photo above shows what the current pharmacy drive-thru lane looked like when the liquor store was still standing. 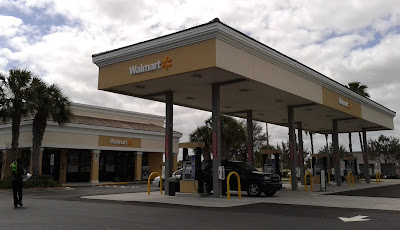 Even with all the change that has happened here over the last few months, I got a few surprise photos of this store from AFB contributor William S. a while back showing the St. Lucie West Albertsons back when it was still open! 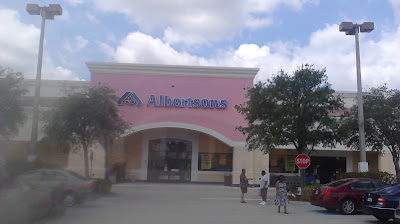 William sent in these three photos of the Albertsons in happier times. Well, it wasn't too happy of a time for the Albertsons, as these photos were taken on May 10, 2012 during the store's liquidation. But it still gives us a quick glimpse of the store. 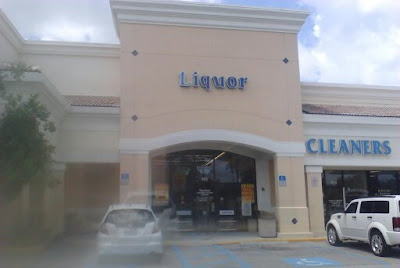 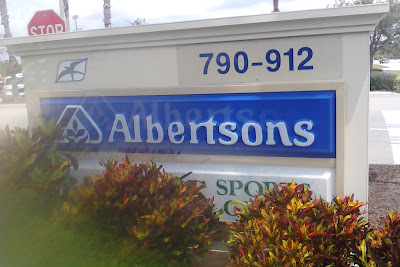 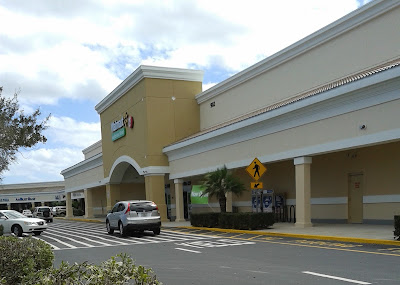 So as time moves on, the mighty St. Lucie West Albertsons finds its new life as a Walmart Neighborhood Market. It would have been interesting to see what Albertsons would have done to this place had it survived into the transition from Albertsons to Safeway. 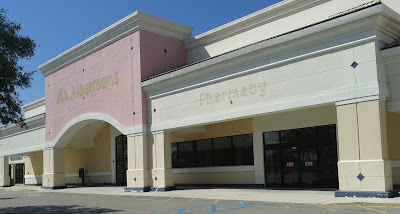 So with this post, the saga of the St. Lucie West Albertsons is complete. Let's take a moment to have one final look at the store back in its original form. If you compare the above photo of the abandoned Albertsons to the one of this store as a Walmart, you'll be able to tell that the front arches are different and in different places.

While the old St. Lucie West Albertsons is gone with most traces of its existence wiped away by Walmart, it sure won't be forgotten, as it's legacy will continue to live on here on AFB.