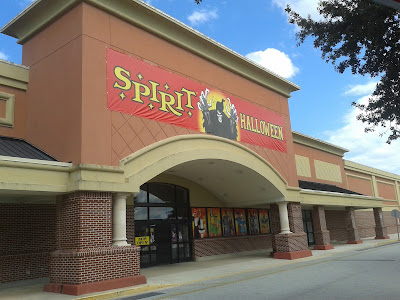 It's now time to conclude our tour of former Albertsons #4471 in Sanford with the second part of this two part post series. As you can see for Part 2 of this tour, we will get to go inside part of this former Albertsons thanks to the appearance of this pop up Halloween store! The photos for Part 2 of this post were actually taken before the photos for Part 1. I came by here the first time not expecting this Halloween store to be here, so this was an interesting surprise for me! After Halloween I was by here again, which is when I took the photos you saw in the Part 1 post to provide the other, more abandoned perspective of this store. Every October since this Albertsons closed, Spirit Hallowen has operated here. That includes this year as well, so if you're in the area and want a peek inside this store, you still have another week to do so. However, if you can't make it to Sanford this week, this post will provide an interesting perspective of this store. Also, if you want a recap of the Part 1 post from this store earlier this month, please click here.

UPDATE 10/28/2016 - Commentor cflguy visited this store again in the last few days, and took some very interesting photos which you can view here. Instead of opening on the left side of the building as my pictures show, Spirit opened in the right half this year, giving an entirely new perspective to this store. Also, cflguy reports that Publix has bought the lease to this building, and has plans to open a store here sometime in 2017, bringing an end to the long abandoned Sanford Albertsons. 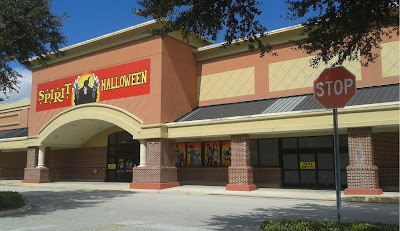 Before we go inside let's take another quick look around the exterior... 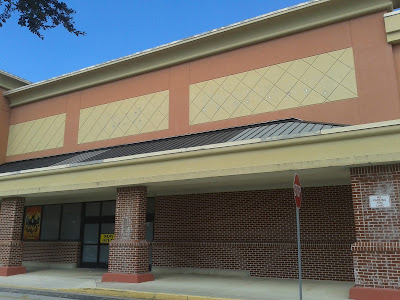 The right side of the building. 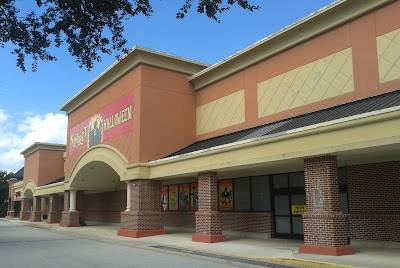 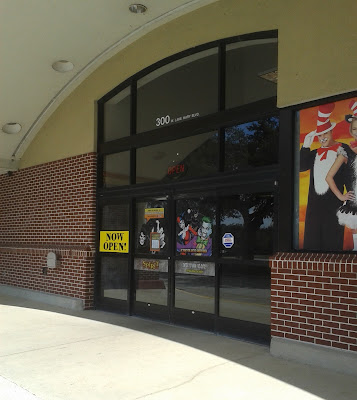 Are you ready to head inside...if you dare... 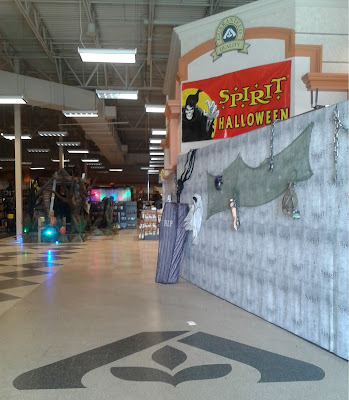 Welcome to Albertsons Spirit Halloween! This interesting mashup of logos greets you when you first walk through the front door, although I think Albertsons' giant leaf logo on the floor overpowers Spirit's banner hanging on the wall. Spirit Halloween's sales floor only takes up the left half of the old Albertsons (home of the deli, bakery, produce, Snack Central, Beverage Boulevard, and the Pharmacy), with the remainder of the old Albertsons blocked off by temporary plywood partition walls. Most of the reason as to why I came back here the second time was to get pictures of the remainder of the store that Spirit blocked off, which kind of worked out. However, for a perspective of this area when the Halloween store isn't in operation, click here. 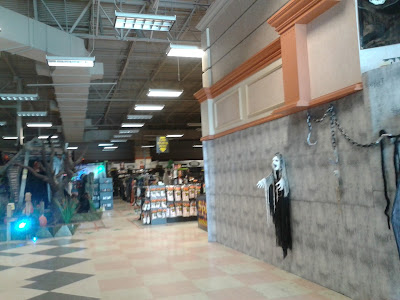 If this store had a Starbucks (which more than likely it did when it first opened), it would have been immediately to my left here. To the right is the left side wall of the pharmacy island, which also doubles as a great place to hang some skeletons from. 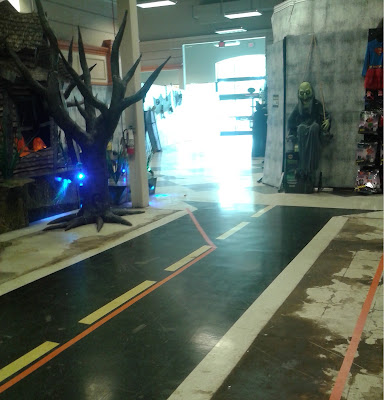 Looking back at the hallway Spirit has set up to funnel shoppers into their salesfloor, which begins at the side of the pharmacy island and runs almost all the way to the back wall. Throughout this post we'll get to see many of the custom tile patterns that were used in the Theme Park/Grocery Palace decor to individualize the different departments (one of the main goals of that interior). In the foreground you can see the road pattern used for Beverage Boulevard (home to all of the non-alcoholic drinks). Whether coincidentally or intentionally, Spirit uses the alignment of Beverage Boulevard as the main aisle through their salesfloor. 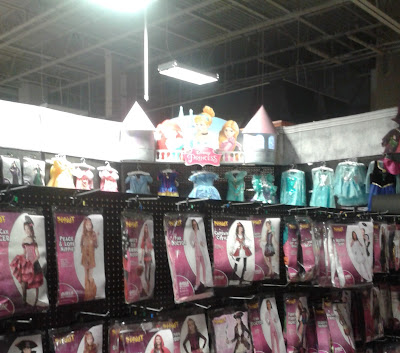 This was taken looking into the front left corner of the store. If you look closely above Spirit's princess castle prop, you can see the awning that surrounds the front of Albertsons' old deli. 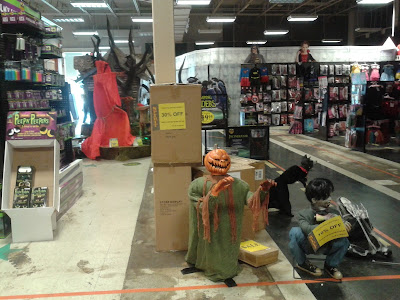 Looking back down Beverage Boulevard from the center of Spirit's salesfloor. 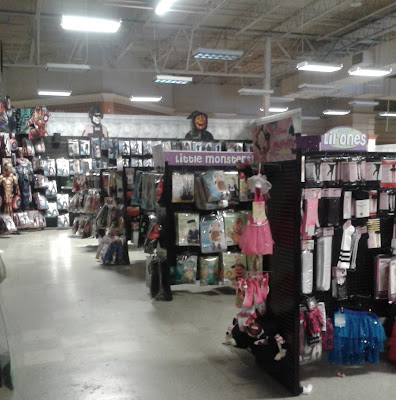 Looking into the back of the store. Above the temporary plywood wall in the back you can see where Albertsons' bakery department juts out. 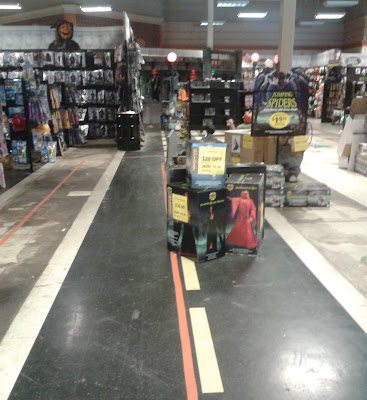 Another look down "Halloween" Boulevard. 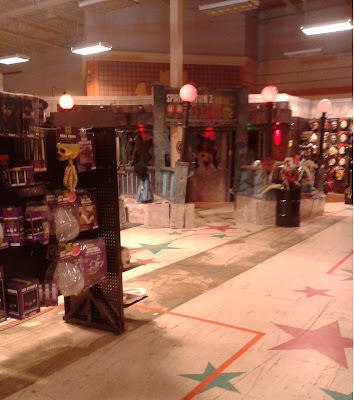 From this angle you can better see the old bakery, and also a few of the produce lamps to the left of the bakery. Spirit's temporary plywood walls do a good job at blocking most of Albertsons' old wall decor from view... 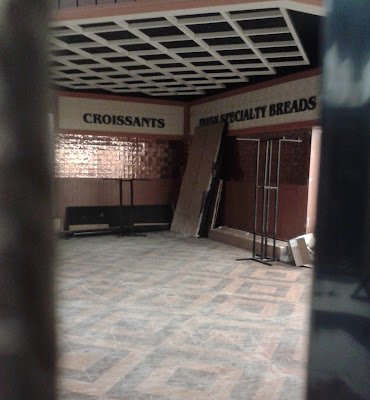 However I was able to sneak this one picture from behind the plywood wall. Spirit had a plywood door built into the wall near the bakery department to access their stockroom space. The two pieces of plywood that made up the door didn't quite line up right, leaving a crack between them. The crack was just large enough for the lens of my phone's camera to capture this look at the old Bakery space, showing all of the bakery decor still in tact (minus all of the cases and such, and the food collage on the jut out). 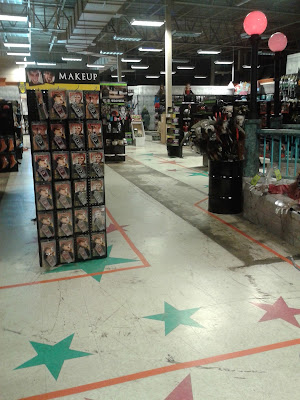 Back out to the main salesfloor for a look at where Snack Central used to be. Snack Central used this star tile pattern throughout the department, and took up a good 3 or so aisles. 4466's Snack Central had aisles that ran parallel to the front wall before its 2009 remodel, a set up that seems to be more unusual compared to most other Theme Park/Grocery Palace Albertsons stores. This store had the more common Snack Central with all perpendicular to the front wall aisles. However, a discussion about Snack Central just wouldn't be complete without a photo of one of the coolest grocery store decor pieces ever thought up: Snack Central's giant bowl of party mix! (although I will admit, Beverage Boulevard's giant bucket of soda bottles was equally as neat). 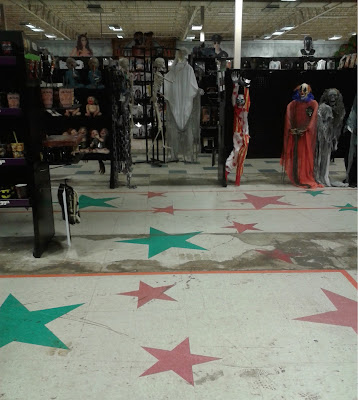 Another look across Snack Central. The only snacks over here now are unknowing customers if one of those zombie props gets hungry. 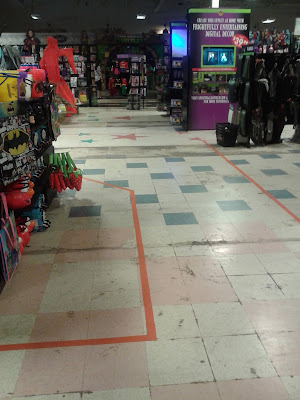 Moving further to the right from Snack Central into this area, where Health and Beauty was located. 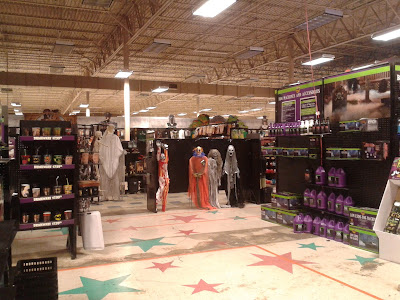 This is looking into the rightmost portion of the space Spirit occupies. Beyond the plywood wall you can see the ceiling reaching into the other half of the store, home to the remaining grocery aisles, meats and seafood, dairy, frozen foods, the pet alcove, and the old checkout area. There weren't any cracks in the plywood to get a good look into that part of the store, and I wasn't climbing up that wall for a peek either! 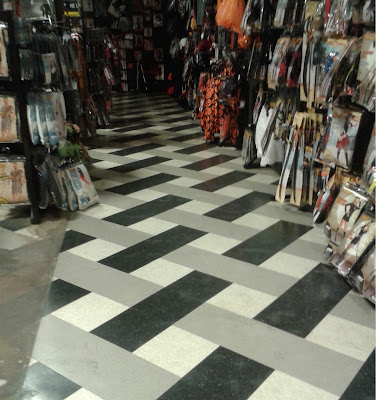 Spirit's salesfloor cuts off where the beer and wine department once was. This is the tile pattern that was used for that department. Above this department would have been a hanging wooden grid that was supposed to make this department more reminiscent of a vineyard, and in some stores the wooden grid was decorated with fake grape vines. You can see a shrunken down version of this setup in the background of this photo, but the stores with an open ceiling had larger version. 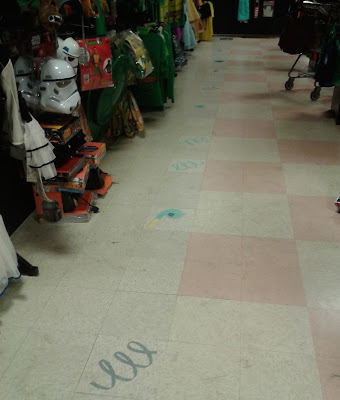 Continuing down the plywood side wall from beer and wine we see some of the floor decals left over from Albertsons' old greeting cards and party supply aisle. 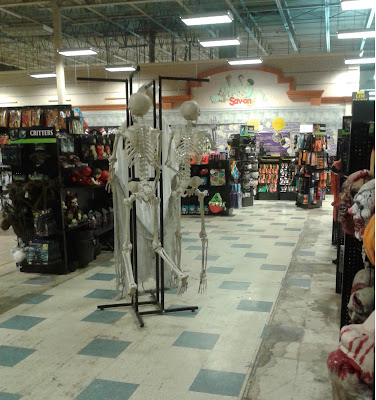 And finally, a look at the old pharmacy counter. 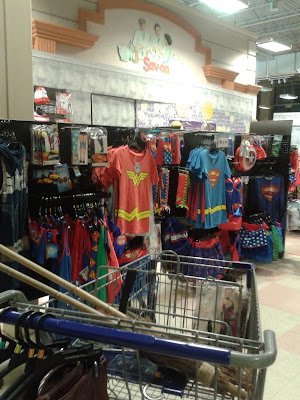 The pharmacy at this store was given the "Sav-on" branding, as can be seen in the signage that was left behind. As I've mentioned on here before, it was always hit or miss as to what Albertsons Florida stores got the Sav-on branding for their pharmacy, and which ones got generic "Albertsons Pharmacy" branding. Even within the same areas you could find both brandings on stores from any era, so I don't know how Albertsons decided when to name a pharmacy Sav-on and when not to. 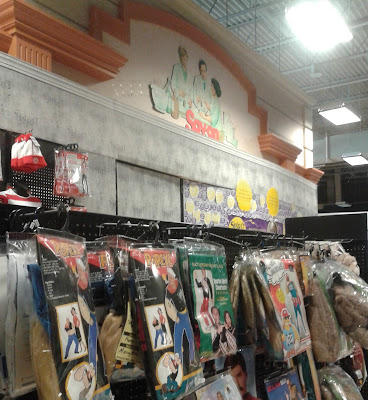 Closeup of the old pharmacy sign. Behind the picture of the group of pharmacists you can see a labelscar, which to me looks like a labelscar from the generic Albertsons Pharmacy signage (I can't find a photo of it to link to at the moment). It was just the word "Pharmacy" spelled out with a slight arch to it, leading me to believe the Sav-on branding was added to this store later in its short life as Albertsons. Spirit was using the area immediately in front of the old pharmacy window as space for their registers, and the inside of the pharmacy island was being used for storage and more backroom space. 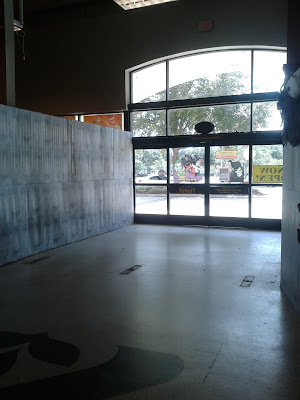 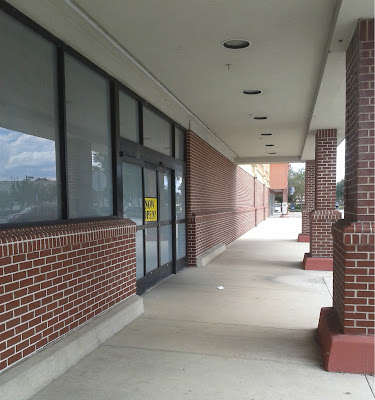 Back outside, looking toward Albertsons' old exit doors. Since Spirit wasn't using this half of the building, they papered over the windows, preventing me from getting any interior pictures of this side of the building during this visit. However, in the Part 1 post from this store I have some photos taken through these windows from after Spirit left, so check out that post if you want a quick glimpse into this side of the building. 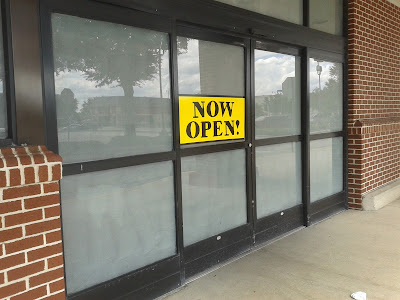 Seems a bit confusing to put a "Now Open!" sign on the door Spirit wasn't using. 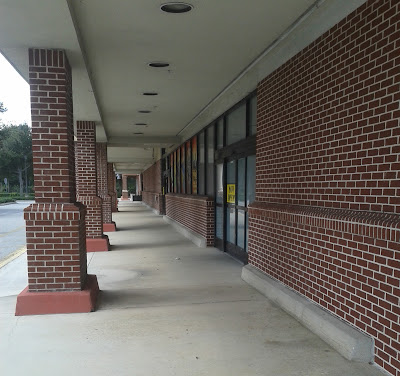 Looking back across the front of the store, from just beyond Albertsons old exit doors looking back toward the main entrance. 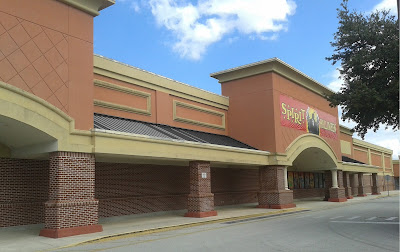 A parting shot of the exterior as our tour of former Albertsons #4471 comes to an end... 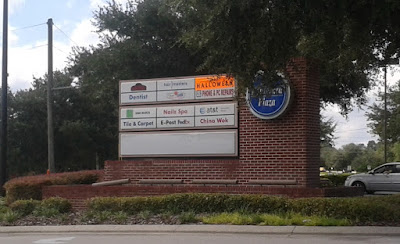 To conclude this post, I have this picture of Boulevard Plaza's road sign, the one which faces Lake Mary Boulevard. Spirit even stuck a small sign on here for themselves (the bright orange one) in one of the small rectangles. Albertsons' logo was actually on the large blank rectangle at the bottom of the sign.

I hope everyone liked this two part tour of the former Sanford Albertsons! I enjoyed walking around inside of that Halloween store taking in all of the Albertsons remnants. It was a strange feeling, but seeing the old Theme Park/Grocery Palace decor brings back a lot of memories for me. Anyway, I have another short bonus post coming up this Sunday, and then back to the regular schedule to cover another former Albertsons store in two weeks.