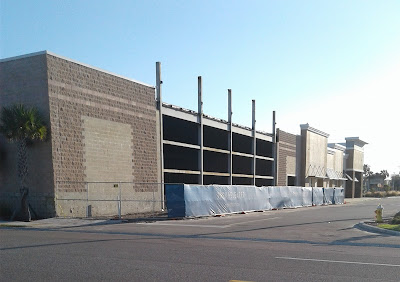 Finally getting around to my photos, that's where we find the project at the moment. As of my visit to the site of former Albertsons #4301 in early 2022, the new Aldi was still in the early stages of construction. Aldi has stripped back some of the facade built by Lucky's to reconfigure it to their own liking, and the inside of the building was still a stripped-out shell. Aldi is expected to open this new store later in 2022, finally bringing an end to this three-year-long redevelopment mess. 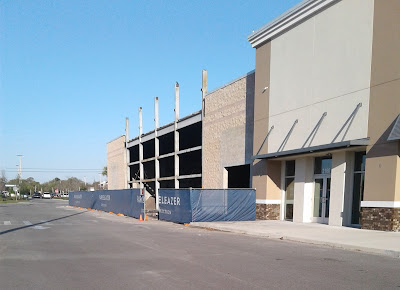 While I never made it to the original Floridian Albertsons store while it was still open, at least I can now say I've made my pilgrimage to the site of it! It certainly would have been more fun to see this building while it still retained some elements from Albertsons, but if nothing else, at least the building was kept instead of being totally flattened, so there's still something original to see here.

Beyond the future Aldi space, we find the row of smaller storefronts that occupies the right half of the former Albertsons building. As of when this post went live, I've only found record of one of these smaller spaces having a confirmed new tenant, that being the space immediately adjacent to the new Aldi store. Moving into that 3,800 square foot space will be a medical office called Paragon Infusion Center, while all the other storefronts are still up for lease. With Aldi coming in as the new anchor by the end of the year, and a frozen custard restaurant being developed on an outparcel, hopefully some of the other spaces will begin to fill up too. 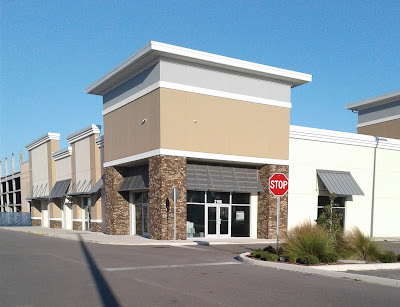 It was interesting the way the old Albertsons building was divided up, with these storefronts running along the front of the building, and then a few more running along the back right side. The front facing spaces are the higher-visibility spots right next to the anchor, while the spaces in the back are more hidden from view. 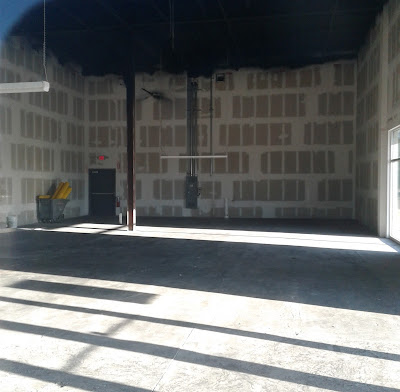 Peeking inside the corner storefront, we find zero trace of Albertsons. Albertsons' side entrance and liquor store would have been in the area of this space's back wall. 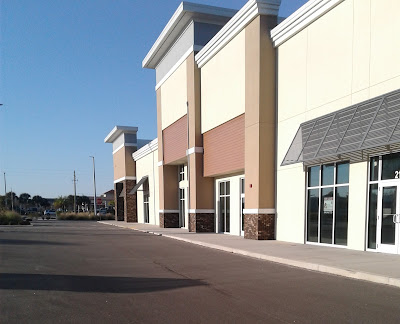 Turning the corner, we find those last 4 storefronts around the side of the building. It looks like three of the four are visible in this photo. 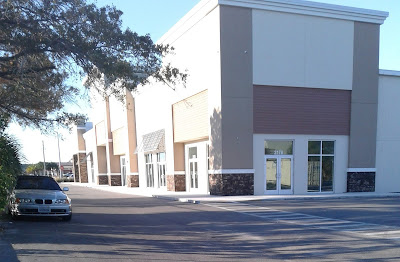 The morning sun glare wasn't helping me much with these last few images, but here's an overview of the right side of the building as it looks now, as seen from the back. 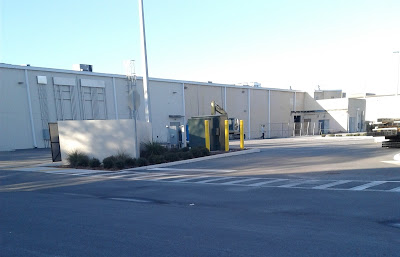 Actually, the back of the building is (for the time being) the only thing left that still looks mostly like it did when Albertsons was here. Albertsons old loading docks are visible at the far right side of the image, and were still painted the original yellow color Albertsons was too. 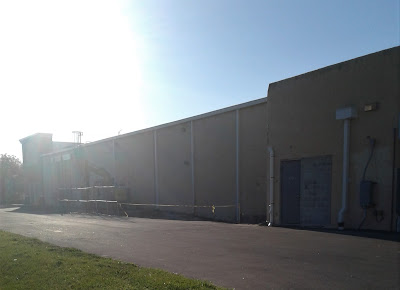 Curse that sun glare! Anyway, there was some work going on here by the loading docks, but it appeared this part of the building was going to remain mostly original from the Albertsons days. Aldi will be inheriting Albertsons' old loading docks, with only some small modifications being made back here. 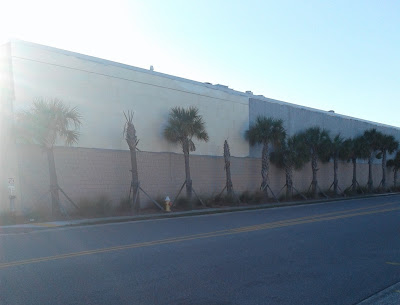 The left side of the building was in the process of receiving some new paint and stone work when I was here, and was still a work-in-progress. 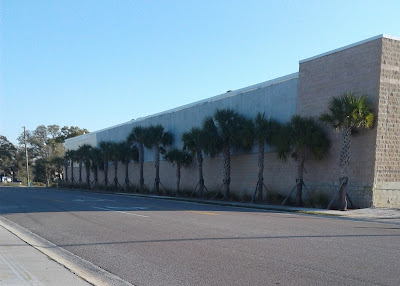 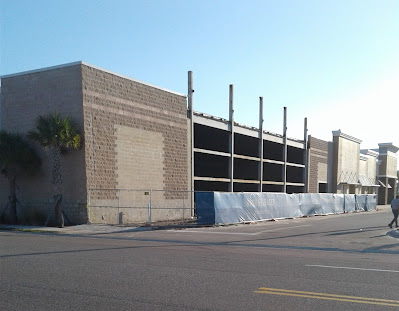 Returning to the front of the building, we've complete our loop around former Albertsons #4301, seeing it as it transitions into its new life as an Aldi and adjoining shopping center. 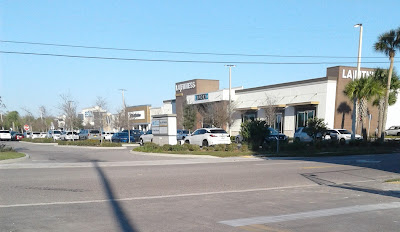 While we're here, before I finish up this little update post, we'll take a quick look at the building next door to the old Albertsons. Pictured here is that building, as seen from the front corner of the old Albertsons store. 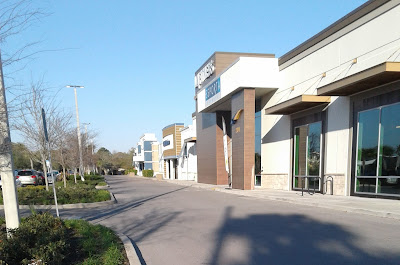 Much like what happened with the Albertsons next door, the building here was subdivided and transformed into a new shopping center, striping away all traces of this building's former life as a Kmart. Originally built at Kmart #3476, this Kmart location opened on April 26, 1979, and remained in operation until 2005, when Kmart's new parent company Sears Holdings chose this store to be one of many throughout the country to be converted into the new Sears Essentials format. While the concept of Sears Essentials had some merit to it, like most ideas contrived by Sears Holdings, they turned it into a flop. While the last of the Sears Essentials stores closed in 2012, the Clearwater store was an earlier casualty, closing for good in 2009. The old Kmart building sat empty until 2016, when the redevelopment that brought Bealls, LA Fitness, and West Marine to the property occurred. 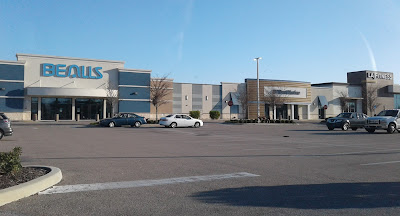 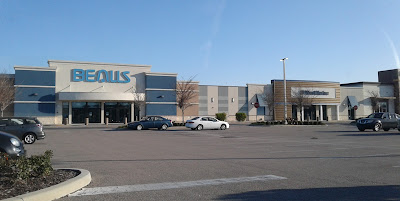 After many years of Kmart and Albertsons sitting here at the corner of Gulf to Bay and Belcher, we now find Bealls, West Marine, LA Fitness, and Aldi. All those stores join the already established Publix and Walmart Neighborhood Market across the street, bringing a full assortment of retail back to this corner again. Thinking about it now, it's not common to see an intersection in Florida with three grocery stores still on it like we'll have here again once Aldi opens. While Aldi is certainly a different experience than the Lucky's Market that was supposed to open here, at least this intersection will continue to offer a little supermarket variety for the people of Clearwater for years to come!
With April coming to an end, we'll switch back to my regular every-other-week posting schedule for May. After a month of me posting every week, I'll give everyone a break for our first post of May coming up next time. The Sing Oil Blogger returns to AFB with another guest post to start off the new month, so be sure to come back next week to see where his travels take us this time!
So until the post after next,
The Albertsons Florida Blogger
Posted by Albertsons Florida Blog