The Empty Shell of Gooding's

As was previously reported, the last Gooding's store closed for good back in May 2020. While the last Gooding's was living on borrowed time due to an upcoming highway project that would reconfigure the interchange between Route 535 and Interstate 4, the pandemic claimed the fate of this Floridian supermarket holdout before the Department of Transportation could. As we learned in our original coverage of this store, the last Gooding's was a store catering primarily to tourists. When the pandemic hit, Orlando's tourism industry went into a freefall. With Gooding's customer base drying up amid warnings not to travel, the store couldn't support itself. Since the last Gooding's was going to succumb to the highway project anyway, the store called it quits early, ending Gooding's sad story and fall from grace. While the last Gooding's was a shell of its former self, it's sad to know the chain is officially dead now.
Today we'll be taking a quick look at the former Lake Buena Vista Gooding's thanks to some photos sent in by contributor Reviewer Jay. These photos are a sad look at this once bustling supermarket and accompanying shopping center, which is now a ghost town not only because of the pandemic, but because of all the businesses closing up shop as the beginning of the highway project nears.

With the building scheduled to come down, Gooding's began to stop caring about making repairs to the place (although repairs never seemed to be much of a priority even in the years prior to the demolition announcement). The above photo shows some of the wood rot and other wear on the building's facade that has begun to show, which is more visible when you click on the above photo and zoom in. 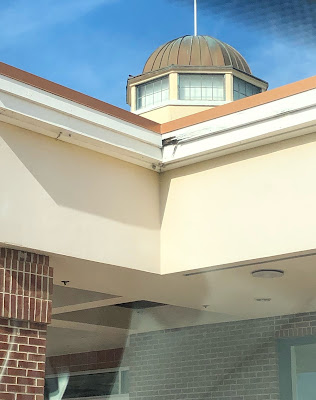 More wood rot is visible here, as we look up toward the cupola on the roof. This building has a really classy look to it with all the ornate exterior details (like the cupola), a throwback to the days when Gooding's was one of the classiest supermarkets in town. 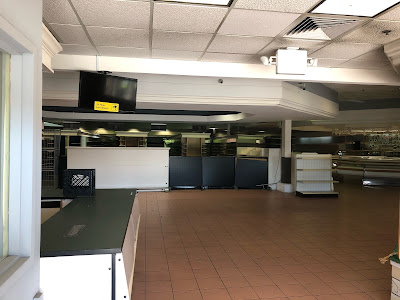 Turning our attention to the interior of the former Gooding's, we see lots of fixtures clustered together, all of them sitting empty. I don't quite know how the closing of this store was handled, as it didn't get any attention until the place was locked up for good. I don't know if there was a closing sale, if Gooding's just stopped taking in new merchandise and let the stock slowly dwindle on its own, or if management just locked the doors one day and never reopened them. If anyone was in the area at the time and knows what happened as the store entered its final weeks, be sure to let us know in the comments. Anyway, I really think had the pandemic not happened, Gooding's would have stuck it out much longer than May 2020, as I believe the tenants of the plaza had until sometime in 2021 to vacate before FDOT began demolition. 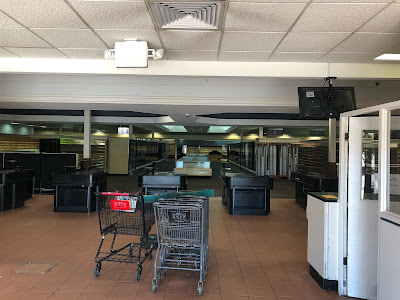 Moving to the other set of doors, here are a few photos looking toward the grocery aisles, the frozen foods department located straight ahead. The old check lanes can be seen in front of that, with a small office to the right of the image. 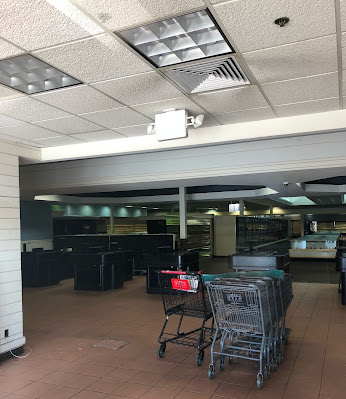 Panning further to the left, we see more grocery aisles. The far left side of the store was home to health and beauty products in a small alcove, as well as the tourist/gift shop type stuff and alcohol - some of the more popular departments when it comes to supermarkets in the tourist district (especially the alcohol - that stuff sells really well in this part of town, as I believe it takes a few beers to get the song "It's a Small World" out of your head!). 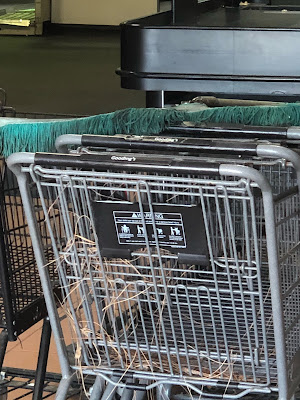 Our final photo of the interior is zoomed into some of the shopping carts lined up in front of the former check lanes. While Gooding's had shifted to rarely using their own name on much of anything in the later years (even using generic "Thank You" bags at checkout), the carts actually have "Gooding's" etched into the handles. It also looks like a Winn-Dixie cart rolled its way down the road and wound up here at Gooding's too, that lone black cart parked next to the Gooding's ones. 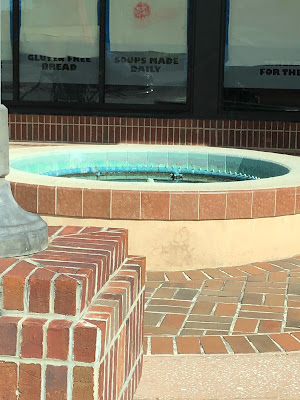 We'll finish off this post with a few additional photos Reviewer Jay took around the rest of The Crossroads at Lake Buena Vista shopping center. Another popular feature of the plaza was its fountain, which sadly, is now turned off for good. 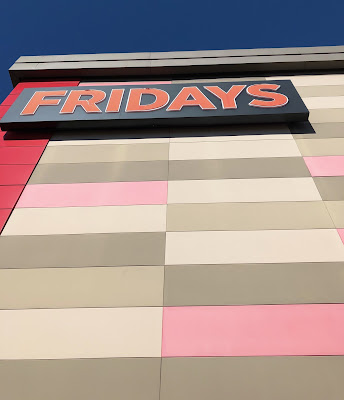 Besides Gooding's, almost all the other tenants at The Crossroads were chain restaurants, a good chunk of which decided to permanently close this spring from the sudden drop in business caused by the pandemic (well, that on top of the plaza's impending demolition). It's especially sad to see all of these restaurants close, as I've been told that many of these restaurants at The Crossroads were top performing locations for most of these chains. Tourists don't do a lot of cooking, so these restaurants were always busy. Unfortunately, it doesn't seem like many have plans to relocate elsewhere in the area. There isn't much room left to build in the area immediately surrounding The Crossroads, so if these restaurants chose to relocate, it would have to be much further out from here. What made this location so good was that is was across the street from a number of resorts on Disney property, as well as the main road to the Disney Springs shopping area. This was prime real estate, all of which is going to be wasted for a giant pond and a flyover ramp. 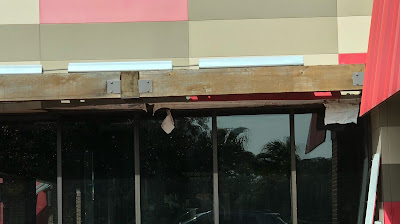 Like we saw over at Gooding's, the exterior of the former T.G.I. Friday's was looking a bit weathered too. 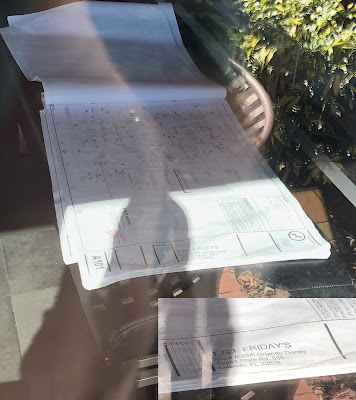 Peeking inside the old T.G.I. Friday's, the restaurant's original plans were laid out on a table just inside the window, sadly for demolition prepping purposes if I had to guess. 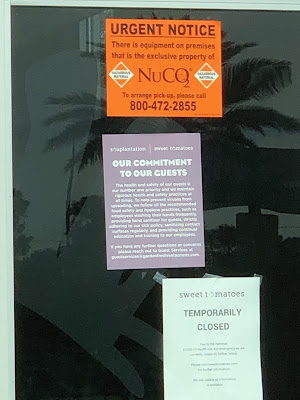 Sweet Tomatoes was another restaurant tenant at The Crossroads. However, unlike the other restaurants here, Sweet Tomatoes (and sister chain Souplantation) went out of business entirely because of the pandemic (making the "temporarily closed" sign taped to the window a bit of a lie in the end). I liked Sweet Tomatoes, so it was sad to see the entire chain go under because of all the craziness of 2020. 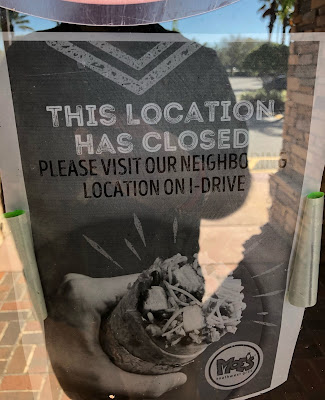 The theme continues over at Moe's too, this sign direction patrons to another location about 5 miles away. 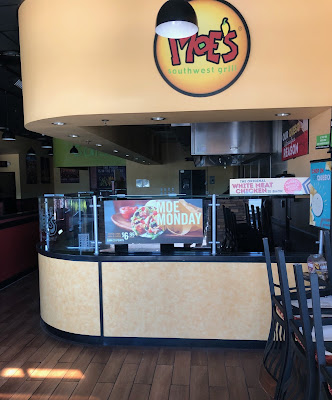 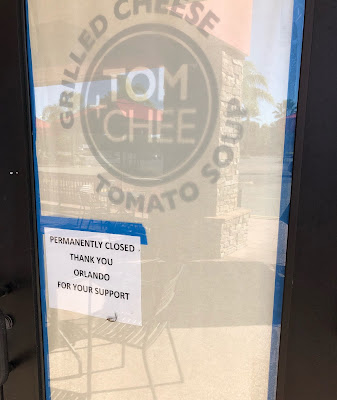 Tom + Chee was closed up and papered over too. I've never heard of Tom + Chee, but according to Google, it's a chain of gourmet grilled cheese restaurants, this appearing to be the only one to ever operate in Florida (with most of the chain's locations appearing to be clustered around Cincinnati, OH, with a few others scattered about). 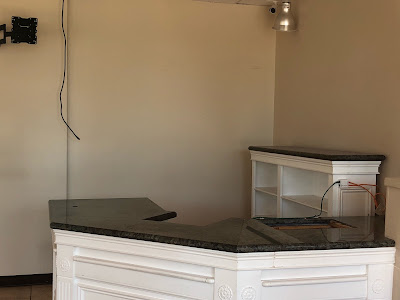 I don't quite know what storefront this was looking into, but it appears to be one of the few non-restaurant tenants the plaza had. Like everything else though, this is closed too. 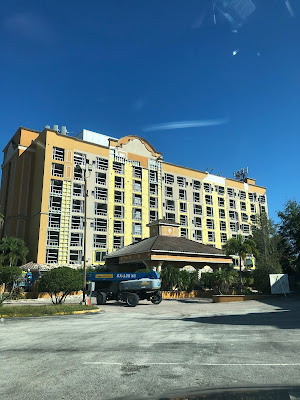 While the Gooding's building and the rest of The Crossroads at Lake Buena Vista still stands for now, this photo will serve as a reminder of what will eventually become of the rest of the buildings sitting on this lot. Pictured here is the former Radisson hotel, which sits right next to the interchange between Interstate 4 and Route 535. Demolition of the hotel has already begun as of November 2020, the first of the buildings on the property to come down in preparation of the new interchange. It looks like the inside of the old Radisson has been completely gutted, with the rest of the structure to fall soon (if it hasn't already).
As the changes over here continue, we'll probably see more of The Crossroads on the blog as the redevelopment of this property begins to pick up speed. Thank you to Reviewer Jay for these pictures, and remember to come back next week for my final blog post of the year!
So until next time,
The Albertsons Florida Blogger
Posted by Albertsons Florida Blog