The End of Gooding's May Be Near... 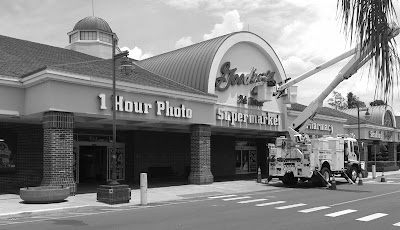 Well everyone, thanks to a tip by commentor Rob Zurburg on my recent post about The Last Gooding's, it looks like there may be an expiration date on this store, and the entire Crossroads at Lake Buena Vista Shopping center as a whole for that matter. Apparently, FDOT want to demolish the entire shopping center for some new ramps connecting I-4 Westbound to SR 535, and a new ramp to connect SR 535 to Hotel Plaza Boulevard, the road which leads into Disney property. Below I have a diagram of the planned interchange that will wipe out the Gooding's and the entirety of the plaza as well:


That area in the top left covered with purple diagonal lines is the Gooding's site, as well has the home to many restaurants and Pirate's Cove Mini Golf. It looks like Gooding's final demise will come from a giant loop ramp, which looks to go right through the middle of the Gooding's building in the plans. The above photo is what FDOT calls their "recommended alternative" for the I-4/SR 535 interchange upgrade project, which is listed as a part of the I-4 Beyond The Ultimate project. The I-4 Ultimate Project is a project to expand I-4 and add express lanes to the road through Downtown Orlando, with completion expected in 2021. The Beyond The Ultimate Project will expand I-4 through the northern and southern suburbs of Orlando once the main project is completed, with construction expected to begin around 2022. For a better look at the interchange reconfiguration map, you can download the original high resolution pdf here. Originally, FDOT had three alternatives for the reconfiguration of this interchange, called Alternative 1, Alternative 2, and Alternative 3. In those original plans, Alternatives 1 and 2 would have only effected the portion of the Crossroads plaza closest to I-4 (with Red Lobster, Taco Bell, Johnny's Hideaway, and the mini golf course being the only casualties). Alternative 3 would have not had any effect on the plaza at all, and is the reconfiguration plan the tenants of the plaza are still pushing for.

As I touched on in the original post about the last Gooding's, while the Gooding's isn't the draw it once was, the many restaurants in this complex still are. The restaurant tenants at the Crossroads are some of the highest volume locations in each chain, and are extremely profitable being right across the street from Disney property and its many resorts. That's why there is a good amount of resistance from the restaurant tenants about FDOT's latest plans (Gooding's, from the looks of it, could probably care less about what may happen here in the future - the restaurants seem to be the driving force behind the resistance to these plans). Many of the restaurant tenants have hired attorneys to force FDOT to reconsider plans that spare the plaza (or save the majority of it), and one restaurant tenant even hired an engineering firm to draw plans to present to FDOT that will spare the plaza and reduce the congestion on SR 535. While FDOT is adamant that their latest plans were designed to handle traffic the best, many of the tenants at the Crossroads believe that Disney may have meddled with FDOT's decision making process. Disney was in talks with FDOT about how to improve the interchange, leading many Crossroads tenants to believe that Disney convinced FDOT to draw up plans that eliminated the Crossroads plaza altogether to increase the draw to the restaurants and shops at the new Disney Springs complex (formerly Downtown Disney). Whether there is a conspiracy or not, that is what's going on as far as the fate of the last Gooding's and the entire Crossroads at Lake Buena Vista shopping center. For more information, the Orlando Sentinel has a good article about the situation which you can read here.

These plans are all preliminary as of now. Nothing is expected to be set in stone until at least 2018, when FDOT plans to begin property acquisition for this project. If this all does go through, many of the restaurants will probably find new homes elsewhere, although not in as prime of a location as the Crossroads site. As for Gooding's, I think it will just be the end for them. Considering how it looks like the Gooding family has very little interest in running their last store as it is, I can't see them making any effort to relocate (or making any repairs to the current building if it will be demolished in 5 years, although it's not like that they would have done that even if there weren't any demolition plans floating around). Now that I'm aware of the situation, I'll try to check every once and a while for any updates on what's happening here. If for some reason you have a burning desire to see the last Gooding's, you still have a little while to check it out, but don't push it off too long!

That's all I have for now. Stick around for more Albertsons coming next weekend!