Unfortunately, I wasn't able to get this week's feature post done in time (an opportunity for a retail trip arose, and that trip was just enough to set me back on my blogging). So while that post will get pushed to next Sunday, I do have something else to feature today. Thanks to AFB contributor Kurt V., I now have some photos to share of the extremely well preserved Albertsons Express gas station in Sanford. This gas station is located on an outparcel of the former Sanford Albertsons (store #4471), a store which I featured in much detail here and here. Since those original posts, the Sanford Albertsons has found some new permanent tenants in LA Fitness and Fancy Fruit and Produce, which you can read more about in the update post here. I attempted to cover the former Sanford Albertsons Express location in my first post about this store, but that coverage turned into an exterior shot of the convenience store and a blurry photo of an old Albertsons sign on a soda machine. When I went inside the convenience store on that first trip, the man at the counter was watching every move I made, which caused the lack of photos. Kurt reports that the lady working the store on his visit was also keeping a watchful eye on him, but his attempt at photos turned out much better than mine way back when! So what did the interior of an Albertsons Express look like you ask? Well, here you go: 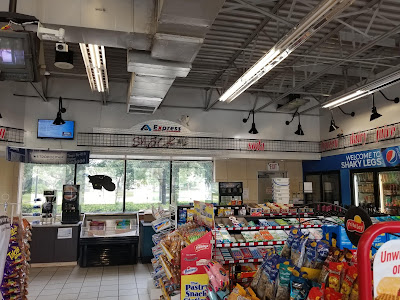 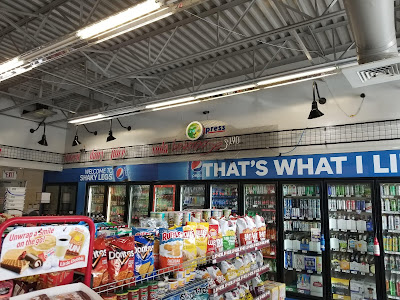 Over here on the right side wall, a clock was used in a rather poor attempt to cover the Albertsons logo. The spotlights illuminating the trim with the category names was another distinctive Albertsons Express feature. Also on the trim were some neon signs, typically located under the Albertsons Express logo. The neon sign on this wall features "Beverage Blvd.", one of the classic department names from the Grocery Palace decor. The other neon signs in the convenience store were road themed as well. In the previous photo we saw "Snack Ave.", and in the next photo we'll see "Check Out Ln.". 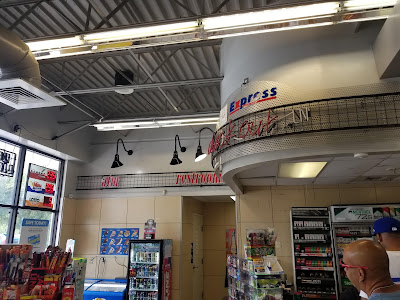 The cash register is located along the left side wall, near the front entrance. The restrooms can be seen beyond the register counter. 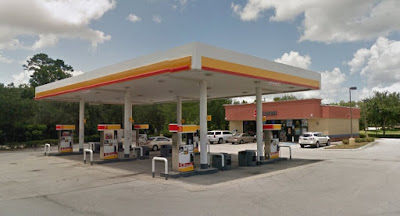 To wrap up this post, here's an overview shot of this gas station as seen from Google Street View. Here we can see the gas canopy in addition to the convenience store in the background.

While there isn't much from Albertsons left at the main store here in Sanford anymore, the old Albertsons Express clearly hasn't changed much since it opened in 2000! If you need gas in the Sanford area, this place is a great throwback to the days of Albertsons in Florida.

Anyway, that's all I have for now. Thank you Kurt for sending in these photos, and come back next week for some more Albertsons!