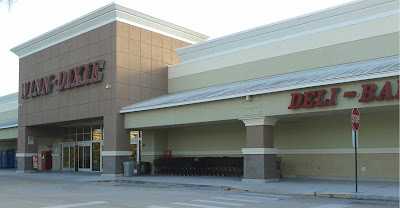 Back in November 2016 I did a blog post on a Winn-Dixie with the very rare version of their early 2000's interior, which I called the "Deluxe Purple/Maroon" interior. A sample of that interior can be seen in the photo above, although you can take a complete look at the store by checking out the original post here. Anyway, doing some random Googling today I stumbled across this article. That article talks about the Stuart Winn-Dixie's recent remodel to the new (overly red) interior, which I've been calling the "Down Down" interior. The remodel was completed in July 2018, and is the usual watered-down remodel situation: new decor on the wall, a few new fixtures, and the new black tile work on the walls in the service departments. The floors still retain the tile patterns from the old decor, which is nothing new with recent SEG remodels. At least the Stuart Winn-Dixie was newer than the store at that link, so the mismatch between the new decor and the rest of the building isn't as striking. Looking at the before and after photos, I have to say this store looked better with the old decor. While that decor was 14 years old and not too terribly outdated looking, the new stuff just looks really, well, boring compared to what was here before. While the Down Down decor can look nice stores that receive a total overhaul (like this one), many of these cheap SEG refreshes don't seem to be the most appealing to me visually. The new decor just looks too forced on these older stores, probably because of the many shortcuts SEG is using to save money (like leaving the old tile behind). However, I do have to say I admire SEG for trying to push more remodels than they every have before over the last year. Winn-Dixie still has a lot of really old, untouched stores out there, so they're not done yet trying to clean things up. However, if you do know of any older Winn-Dixie stores out there with any rare elements from many years ago still floating around, it's probably best to take a picture or two of it now before it gets painted red!

To conclude this post, here is an after shot of this Winn-Dixie showing off the new look. This photo was taken from a similar angle to my before photo featured above to compare the two decor packages. For more photos of this store post-remodel, you can check out the photos taken by T.A. Walker at the article I linked to earlier, as well as some additional ones over on this store's Google page.

So on the positive side it's nice to see Winn-Dixie put some money into their stores (even if they do cheap out a bit here and there). However, this particular remodel in Stuart brought an end to one of the rarest Winn-Dixie decor packages that existed. At least I thought to stop here when I did to get some pictures of the rarest Winn-Dixie interior, so at last there will be some record of the elusive Deluxe Purple/Maroon decor for years to come!