Thanks to AFB contributor Ian W. (on flickr as YonWooRetail2), another long lost Albertsons has been brought back to life in one of his many Albertsons store recreations! So far my searches for pictures of this store have turned up nothing, which is to be expected considering this store was demolished over ten years ago. With that being the case, Ian's recreation is the next best thing for all of us! Albertsons #4343 was a typical Skaggs model Albertsons store, and it received minimal updating to the exterior during its life as an Albertsons (from what I can tell in the historical satellite imagery). The minimal exterior updating leads me to believe this store finished out its life with the Blue and Gray Market interior, as most of the remodels after that decor came with some kind of facade upgrade this store did not appear to have. Since this Albertsons store has long been obliterated, there really isn't much else to see here. However, Ian did find some old newspaper ads and articles about this store, which will help as I tell everyone the story of Albertsons #4343: 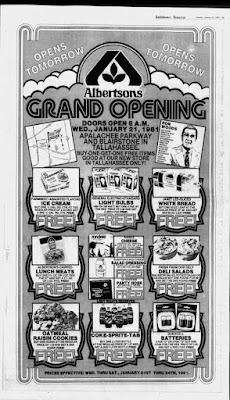 Albertsons #4343 opened on Wednesday, January 21, 1981 immediately to the east of the new Governor's Square Mall. This store was the second of four Albertsons stores to open in Florida's capital city as the years went on (with the other three being stores #4315, #4428, and #4497). Governor's Square Mall was a big deal when it first opened in 1979. Featuring anchors JCPenney, Sears, and Maas Brothers, the two level mall was spectacle to behold with its vast variety of stores contained within. As with the construction of any super-regional mall, other retail will soon follow on the land surrounding it. New stores and shopping centers popped up all around Governor's Square Mall in the years following its opening, including this Albertsons store. Above is an ad Ian found in the Tallahassee Democrat archives, announcing the grand opening of the Governor's Square Albertsons store. By clicking on the above photo, you can view the ad on Ian's flickr photostream (which makes it a little bit easier to read). 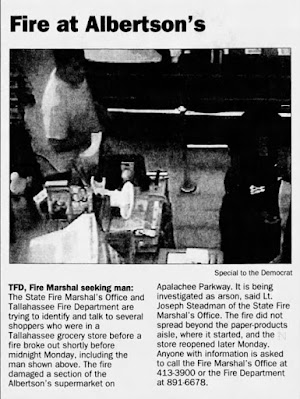 As the years went on, Governor's Square Mall continued to expand and attract new retail to the area. The Albertsons continued to serve its shoppers with a small remodel or two since its 1981 opening, but for the most part retained many of its original characteristics. In May 2005, an arsonist set fire to the paper goods aisle of this Albertsons (as can be seen in the above article). No one was injured in the fire, which did minimal damage to the store itself. In addition to the fire, 2005 was also the year that Albertsons #4343's lease on this building was to expire. According to Ian's research, Albertsons was trying to market this building to any interested parties in late 2005, in preparation for the lease's expiration at the end of the year. That action seems to suggest this store was probably slipping in sales, considering Albertsons was more interested in disposing of this store than trying to renew the lease agreement as 2005 went on. In October 2005, Albertsons made the official announcement that they would be closing their Governor's Square store, with the official last day in business falling in November 2005.

The old Albertsons building sat empty until 2007, when Kohl's took over the site to build a new store of their own. The Albertsons building was demolished and the two-story Kohl's building you see above was constructed. This store is somewhat interesting in the fact that it's a freestanding suburban two-level Kohl's store, but as far as traces of Albertsons are concerned, there's nothing left to see here.

Thanks again Ian for the photos and information that you provided on this particular Albertsons store! Let's move on to some historic satellite imagery to see what this site has looked like through the years. The following imagery is courtesy of Google Earth and historicaerials.com: 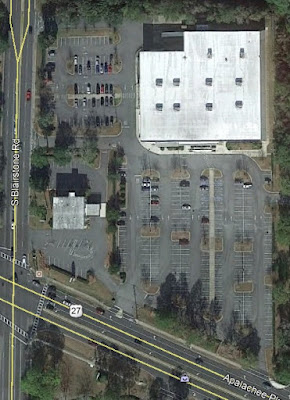 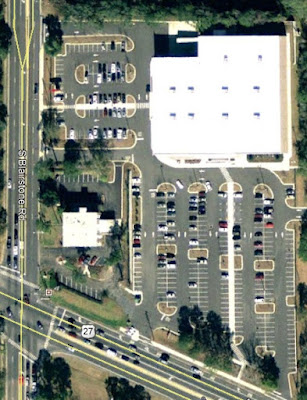 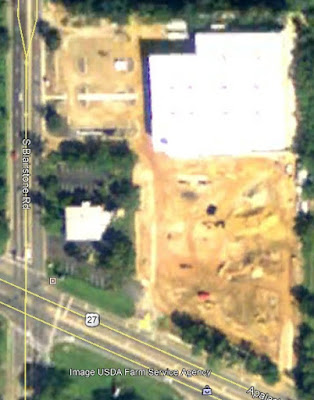 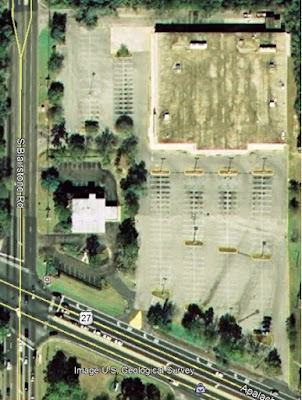 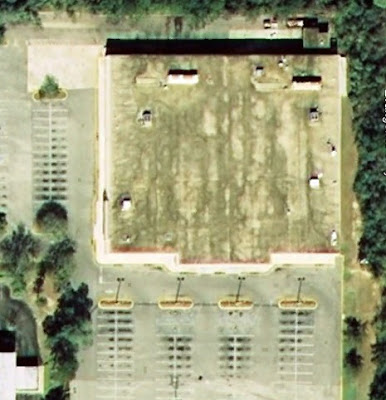 Former Albertsons #4343 - 2006 - Here's a nice clear view of what the original Albertsons building looked like, zoomed in a bit on the previous image. The liquor store was on the left side of the building. 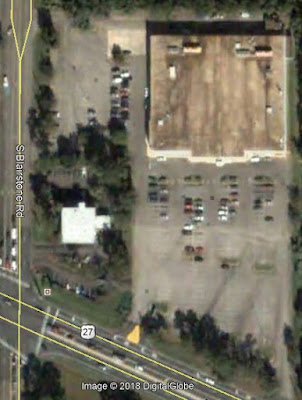 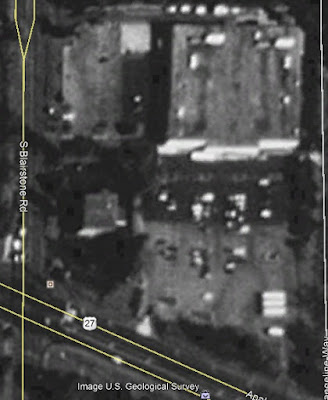 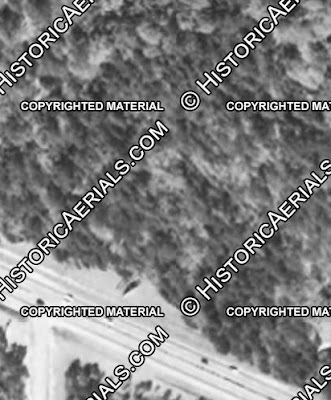 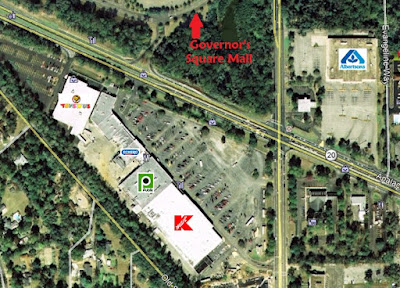 Diagonally across the street from this Albertsons store was a shopping center that contained a Publix and Kmart. That shopping center was constructed in 1972, long before the mall and the Albertsons opened. Albertsons competed with this Publix for its entire existence. A year after the Albertsons closed, Publix decided to relocate from this longtime location to a new store just up the road. Since this post was somewhat short, let's jump across the street for a moment to take a closer look at this Publix...

Thanks to flickr user shawnson, we're going to get a tour of this classic Talahassee Publix as it looked back in 2006, just prior to its relocation! I've linked to the flickr album from this Publix before, but these photos were too good not to share yet again with everyone! This Publix remained absolutely untouched from the 1980's until its closure in 2006, and I'm sure it was one of the last Publix stores of this vintage (interior decor and signage wise). 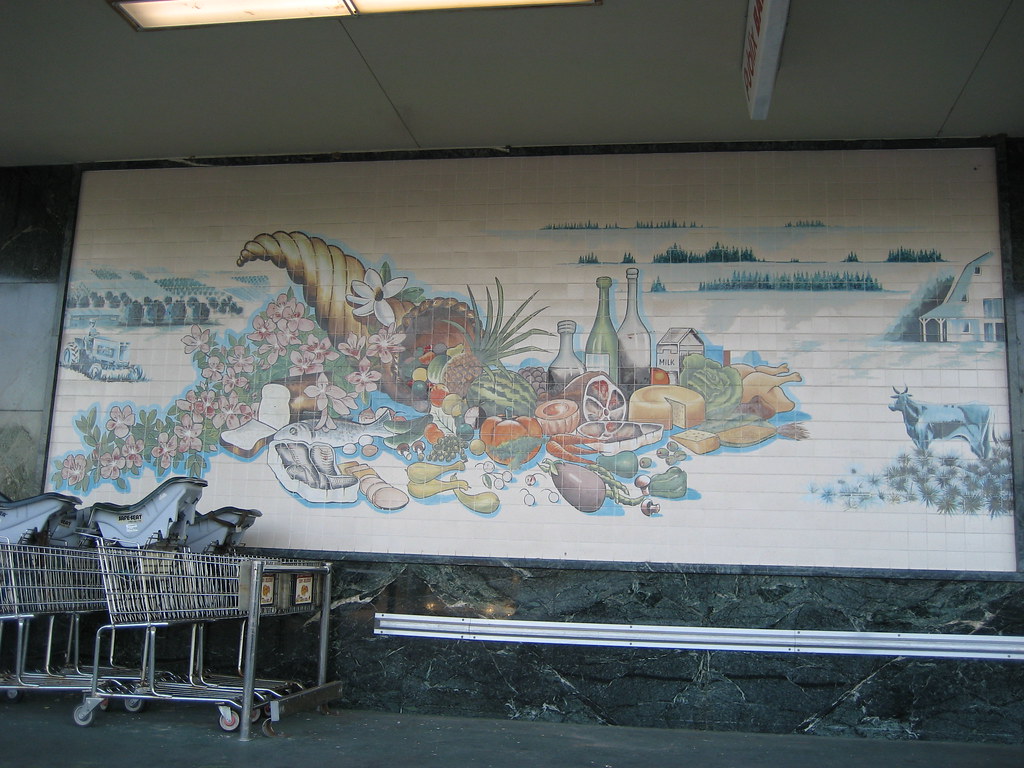 Before heading inside the Publix, here's a quick peek at this store's tile mural. This mural takes the common wine and cornucopia design and transposes it onto a scene from a farm, with farmlands and a farmhouse in the background. Like many older Publix murals, this mural has a more muted color scheme compared to the brighter colors seen in the newer murals from the later part of the 1970s and the early 1980s. 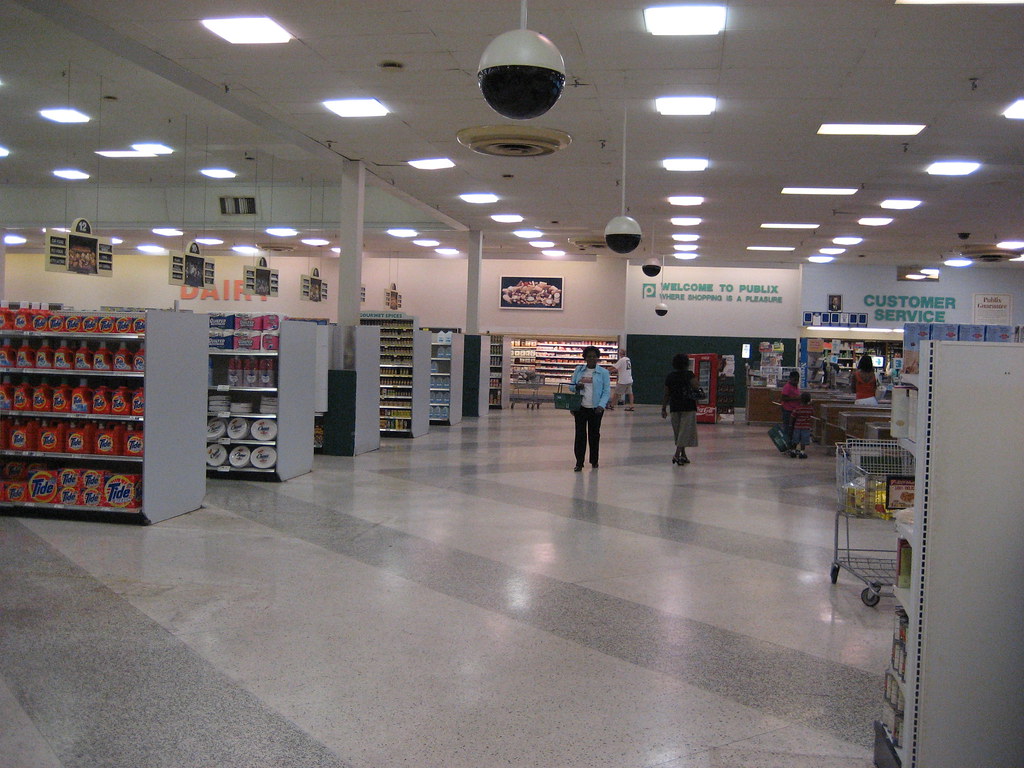 Heading inside, what do we find but Publix's 80's decor! This decor was one of the predecessors to the 90's Wavy Pastel decor. Wavy Pastel shared some similarities to this older look, mostly in the color scheme, but also with the design of the register lights and some of the department logos. I'm actually surprised a store that looked this old lasted as long as 2006, as this was a pretty dated look by that time (this store feels like something out of 1989 in these photos). Publix did a good job at getting most of their older stores updated in some way by the late 1990's, putting a lot of money into updating many older stores to a modern decor and format for the time. I guess since this store had plans to relocate eventually, Publix didn't bother to change anything here.

The above photo looks across the front end toward the customer service desk, which like most older Publix stores, was located in the front right corner of the store. These photos were taken in the days before this store relocated to its new home up the street, which is why some parts of the store look pretty bare in the photos. 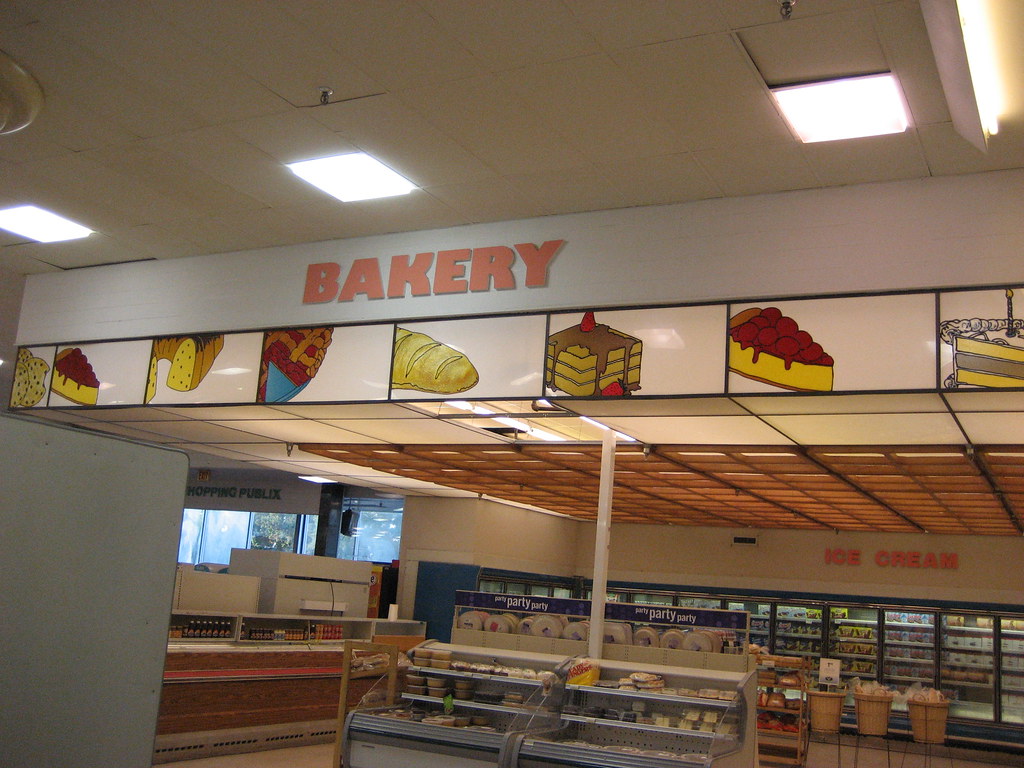 The bakery department in the front left corner. I like how pictures of baked goods were incorporated into the panels that covered the lights! 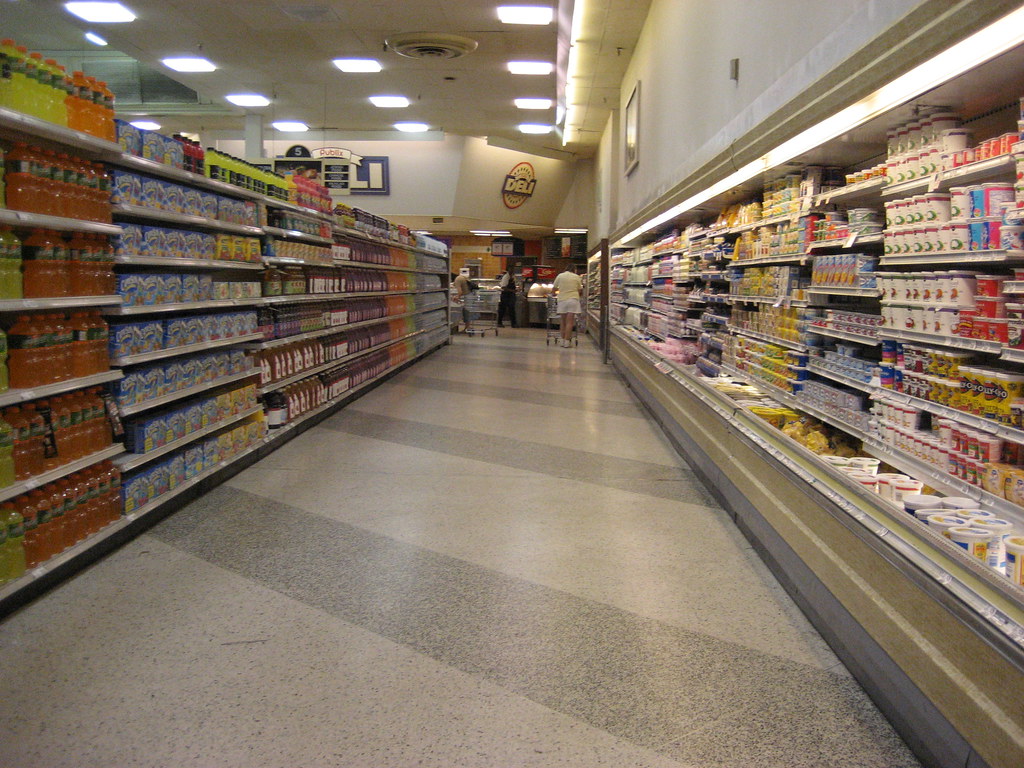 Dairy, located along the right side wall. 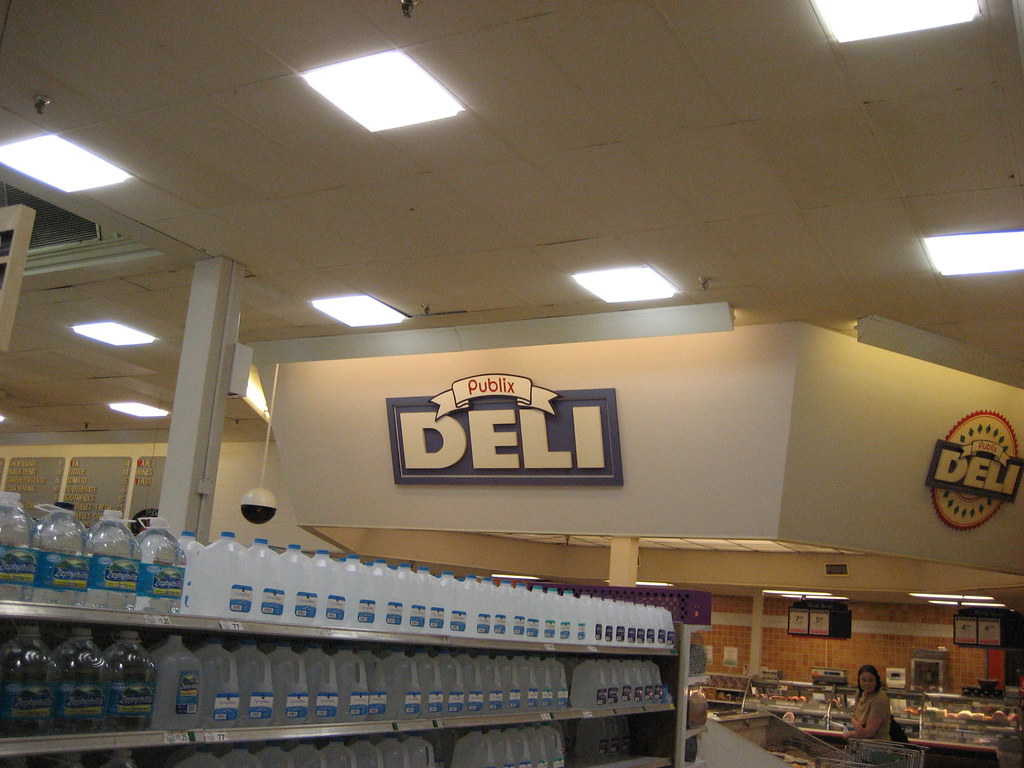 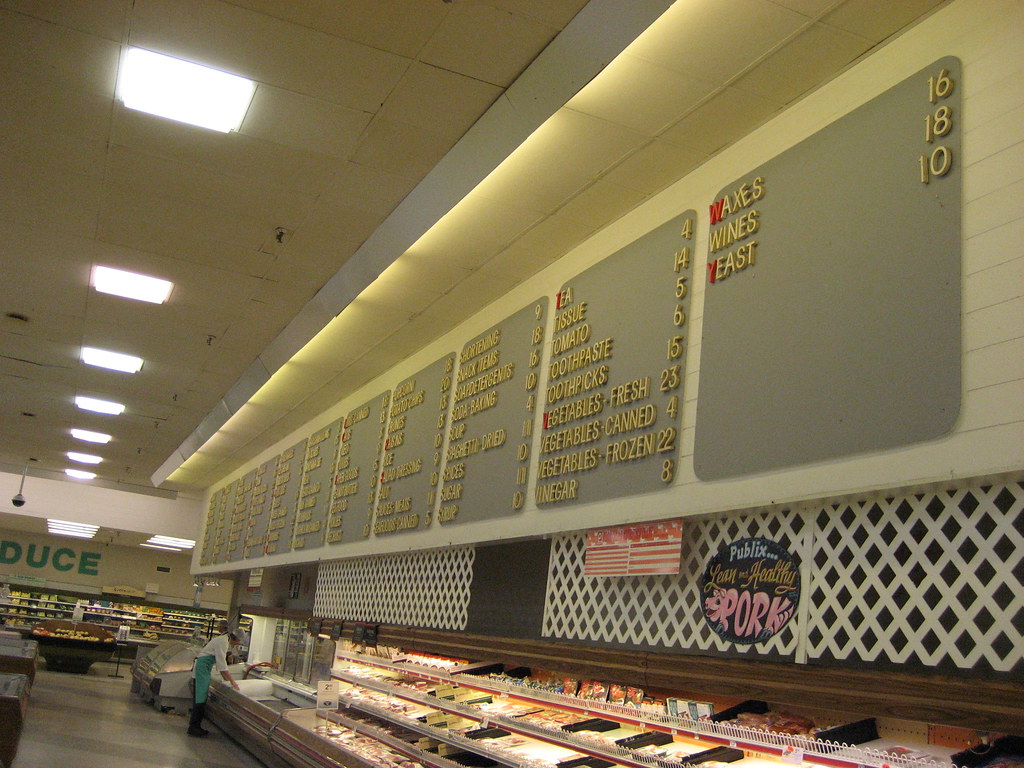 Another classic Publix trait was this aisle directory, placed along the store's back wall. This directory was large, designed to allow customers in the aisles to glance over and find the location of a particular item if they didn't know where it was. 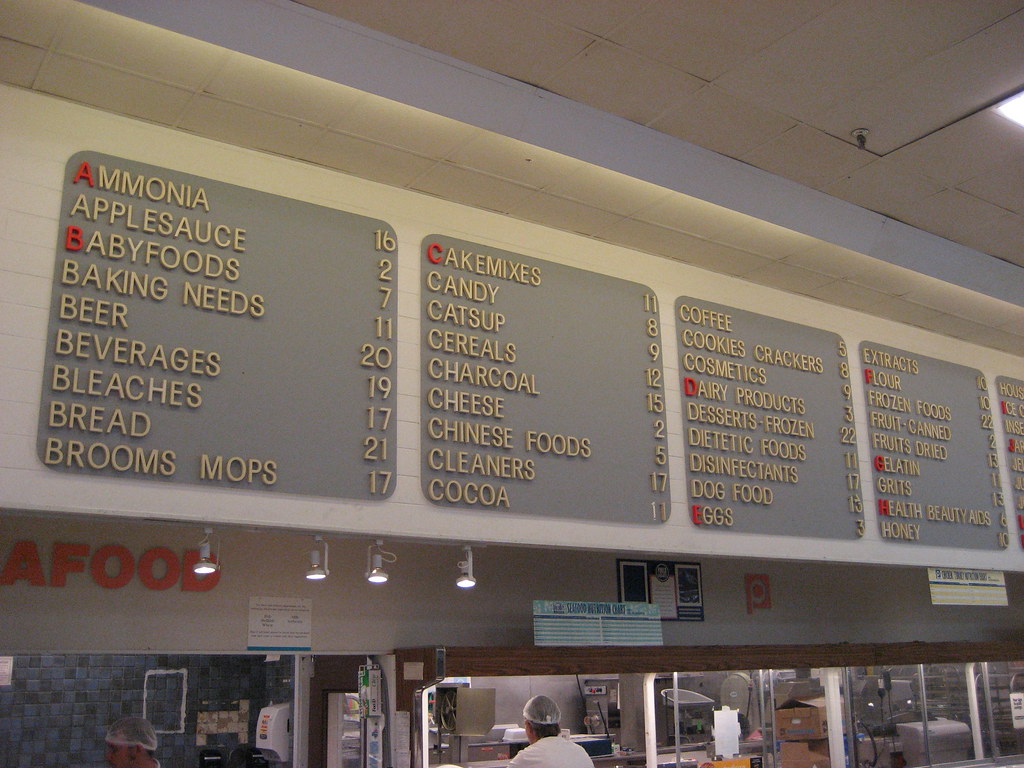 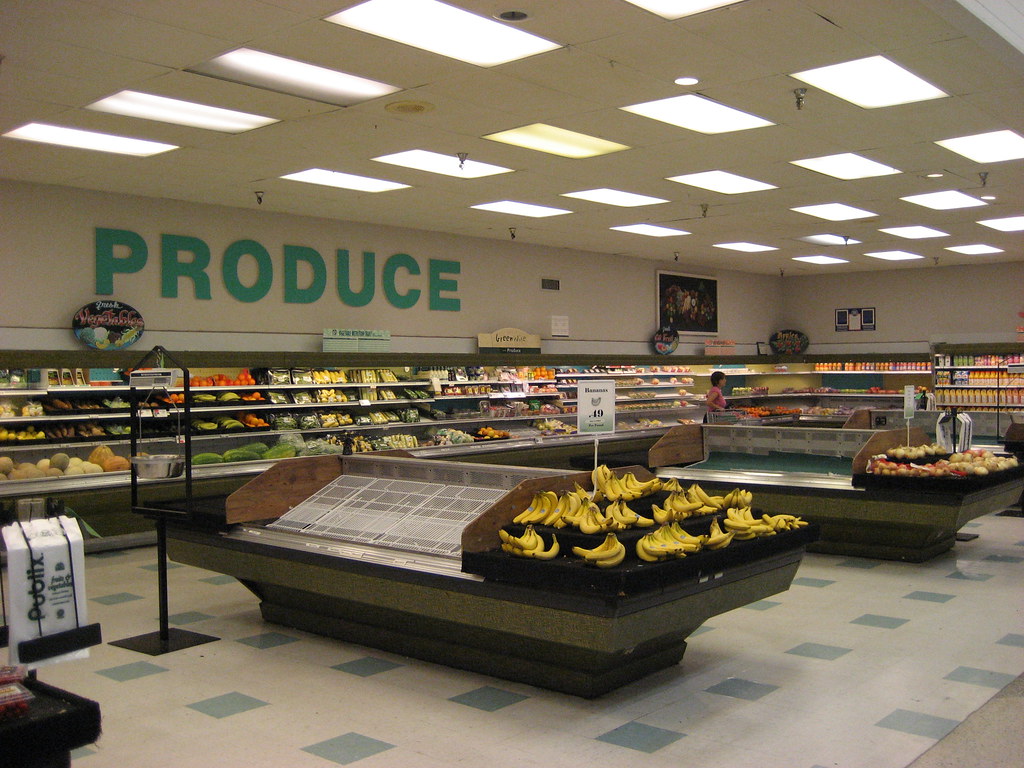 Produce was located in the back left corner of the store in a small alcove. This alcove appears to have been added on at some point (probably during the 1980's when the store remodeled to the look you see here). The lower ceiling and tiled floors are what suggest to me this space was carved out of a portion of the back room. 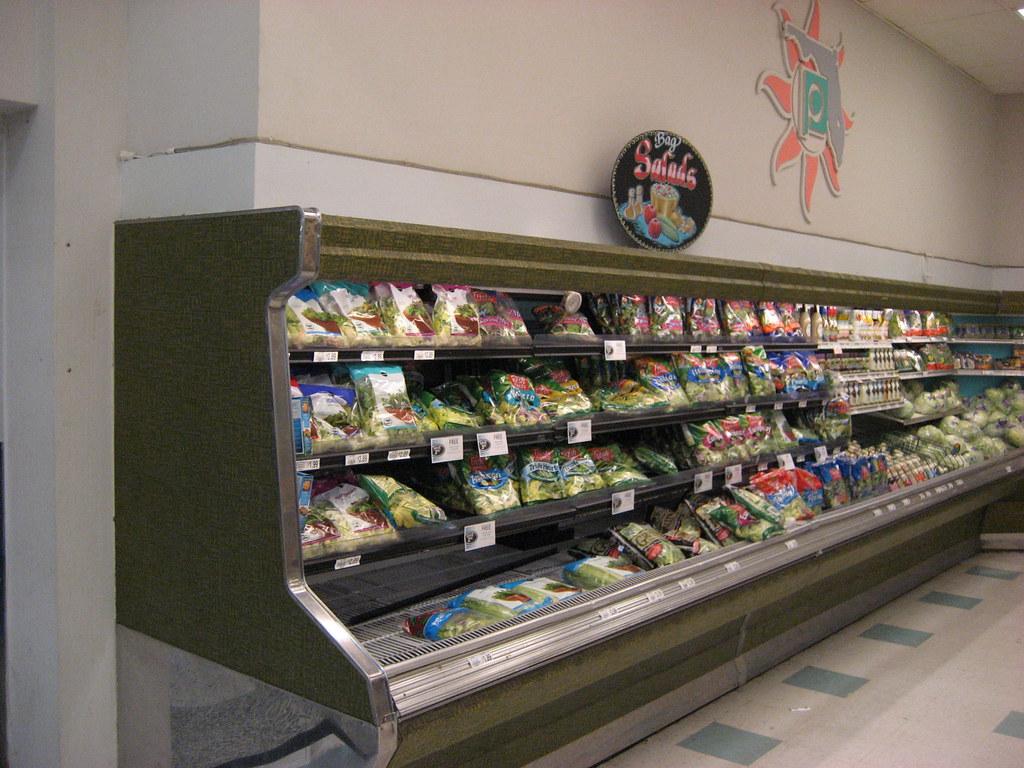 Salads. However, something a bit more interesting than the leafy greens can be seen above the coolers. Prior to Publix's first store outside of Florida in 1991, a lot of their signage and advertisement used to include pictures of the state of Florida and other Floridian themes, to promote themselves as "Florida's Supermarket" in a way. An example of the Florida-centric design can be seen in the decor piece above the coolers, with the Publix logo placed next to the state of Florida, with sun rays around it (we are the "Sunshine State", after all). After Publix began their expansions outside of Florida, all of that stuff went away. 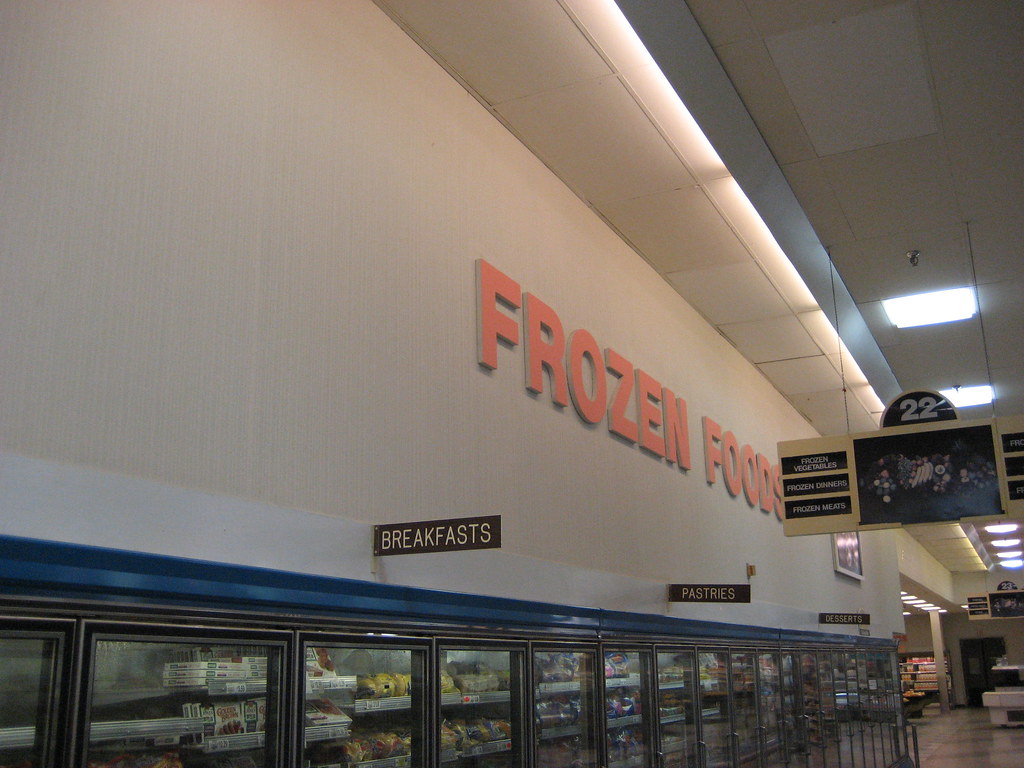 Frozen foods are located along the store's left side wall. All of the signage visible in this aisle certainly has a strong 1980's feel to it (especially those etched wood grain category markers)! 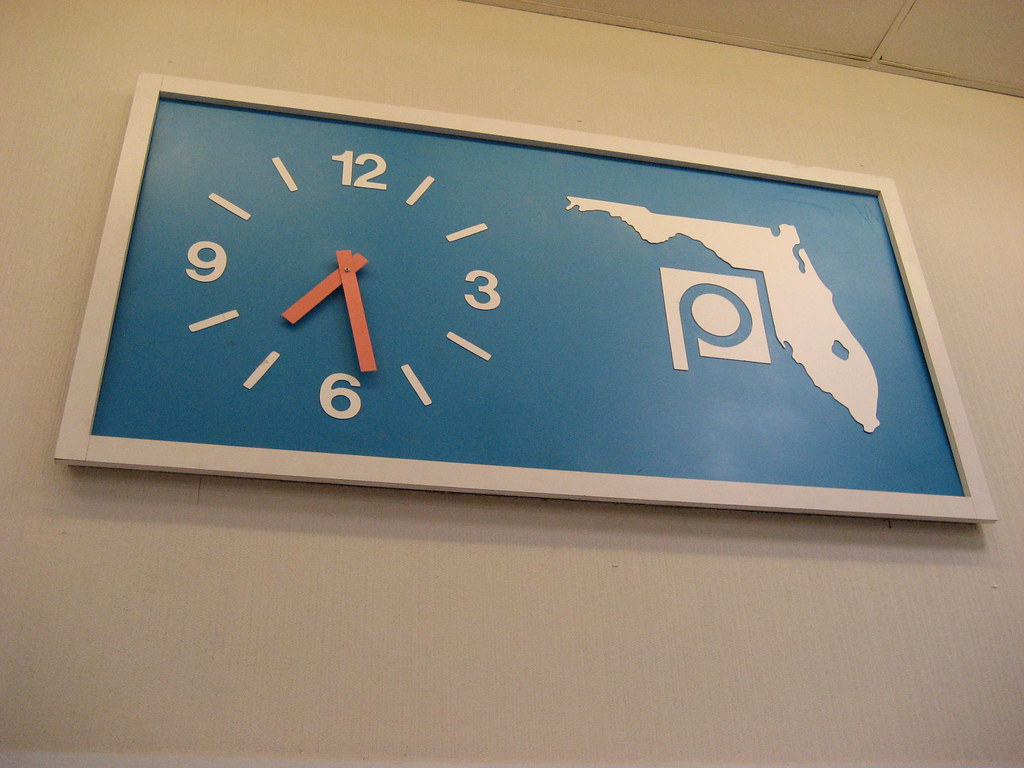 Located near the frozen foods department was this really cool Publix clock! I wish I could have gotten my hands on one of these! This clock is another great example of Publix's "Florida store" theme. 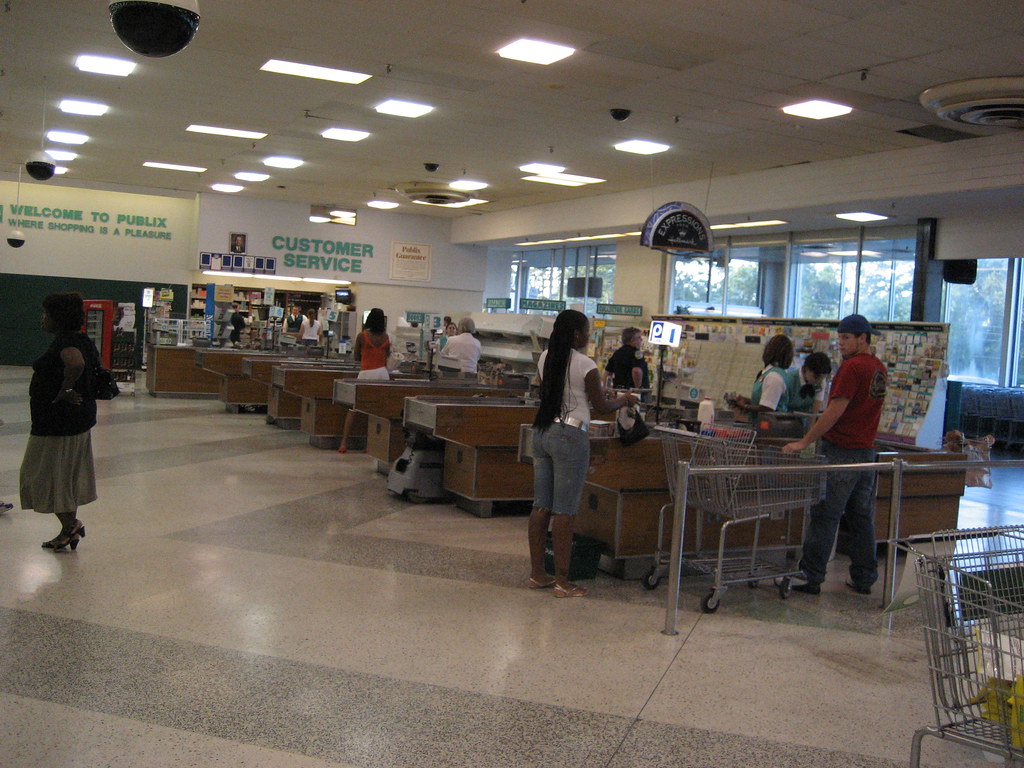 Lastly from inside of this Publix, a view of the (very old) front checklanes. I'm glad that these photos were published to flickr, as they give a very nice overview of what Publix used to look like back in the 1980's. This store was certainly the last of its kind, and I'm very glad shawnson though to get some pictures of this place way back when. Shawnson's album has some extra photos of this store that I didn't include in this post, as well as some of this store in the weeks after its closure. Here's the link again to that album. It's definitely worth a scroll through!

After closing this location, Publix moved a mile north along Blair Stone Road to Governor Square's north side. The new Publix, store #1051, opened on May 4, 2006, the day after store #113 closed. The new store is your typical 2000's Publix, and certainly not the spectacle the previous location was! After sitting empty for 3 years, Publix #113 was gutted to the bare walls to make room for a new hhgregg store. The former Publix space is completely unrecognizable now. The exterior was completely modified, and the tile mural was shattered and destroyed. You'd never know anymore that space once house a Publix store. With hhgregg's bankruptcy and liquidation in 2017, the old Publix space is sitting empty yet again. 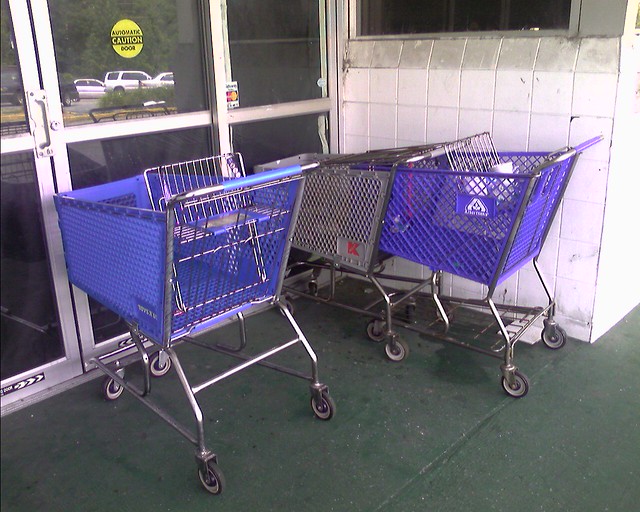 To conclude this post we have this photo, also from shawnson's photostream. After one of his visits to Publix #113, he wandered down to the then-empty former Eckerd space in the plaza, where a few shopping certs found themselves abandoned. Of the three stray shopping carts that found their way over here, one of them happened to be from Albertsons #4343 across the street! This photo was actually taken about a year after the Albertsons across the street had closed, so it's interesting one of their carts happened to linger around this long afterwords (and for all we know, could still be floating around Tallahassee somewhere, 12 years later).

While there wasn't much to see at the site of former Albersons #4343 anymore, at least we had those photos of the classic Publix across the street to make up for it! Thanks again to YonWooRetail2 and shawnson for providing us with all of these photos!