When you bring up Florida retail with anyone, the first thing they'll mention is Publix. Publix has a long history here in Florida (not to mention a strong following) that dates back to their creation in Winter Haven in 1930 by George Jenkins, or as he was more commonly called by his associates, "Mr. George". Mr. George was a very innovative man, adding features to his stores such as air conditioning, florescent lighting, terrazzo floors, and automatic eye doors, all of which were unheard of concepts for a supermarket back in the 1940's when Publix started to expand throughout the state. However, one of the most unique ideas of Mr. George came along in the mid 1950's. He had the idea to commission a tile mural to be placed on the front of every one of his new stores. He hired local Winter Haven artist Pati Mills to hand paint nearly 200 tile murals for new Publix stores across the state for nearly 25 years. These murals were comprised of hundreds of 4x4 white tiles, each of which was hand glazed and fired. I think these murals are one of the most interesting parts of Florida retail history, which is why I decided to do an entire post about them.

This store is a 70's Model Publix that was renovated sometime in the mid-90's, which is why the exterior looks different than a typical 70's Publix. This store has two murals, one to each side of the entryway. 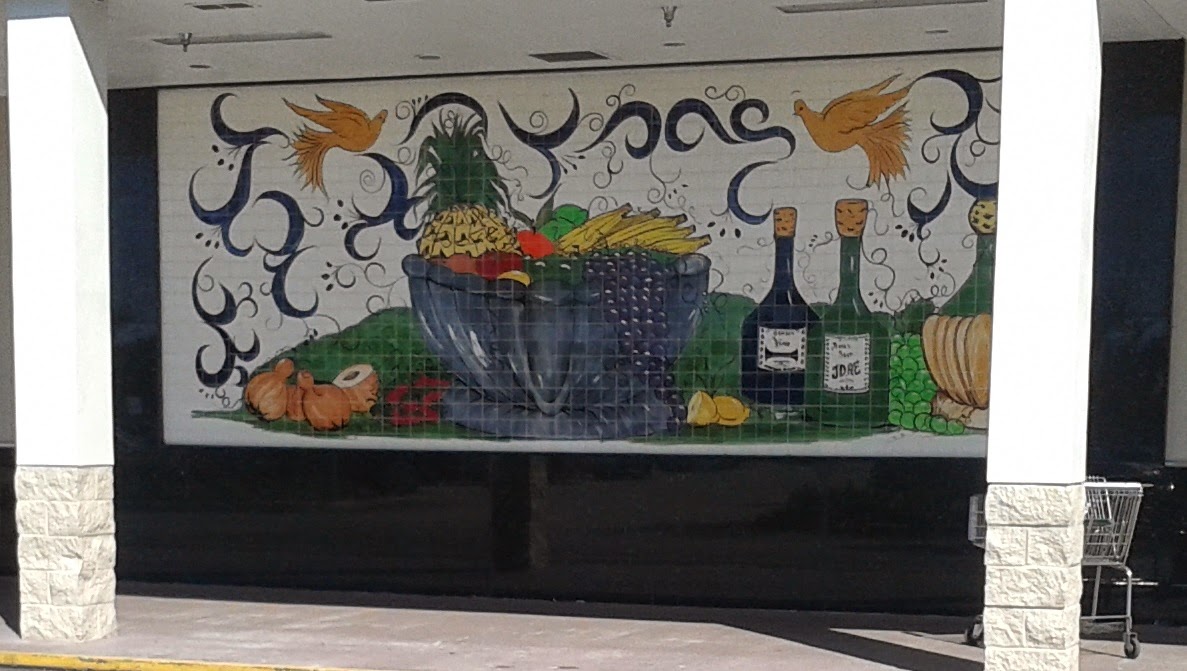 This mural is the one that's located to the right side of the entryway, and has a fruit and wine theme. This mural, along with the cornucopia (which we'll see below) were the two most common themes for these murals. While these murals sometimes shared common themes, no two were ever exactly the same. 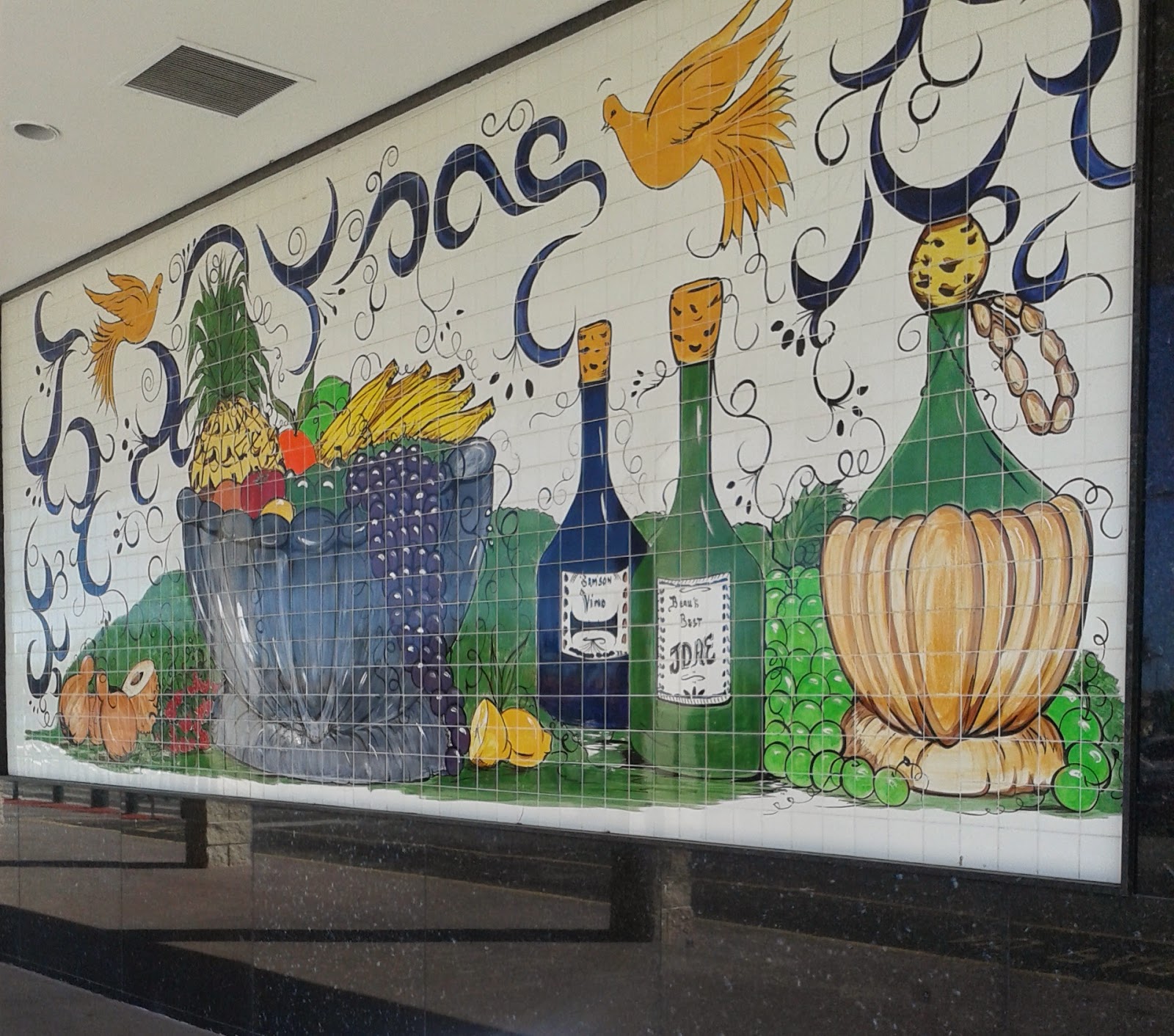 I don't know much about tile glazing, but this looks like it took a long time to do! And this mural is a baby compared to the one on the other side of the store! There's a lot of detail if you look at these murals closely. I guess the doves flying over all of the food means 'A Plenitude of Food brings Peace'. Possibly anyway. I'm not very good at finding the deeper meaning in art. 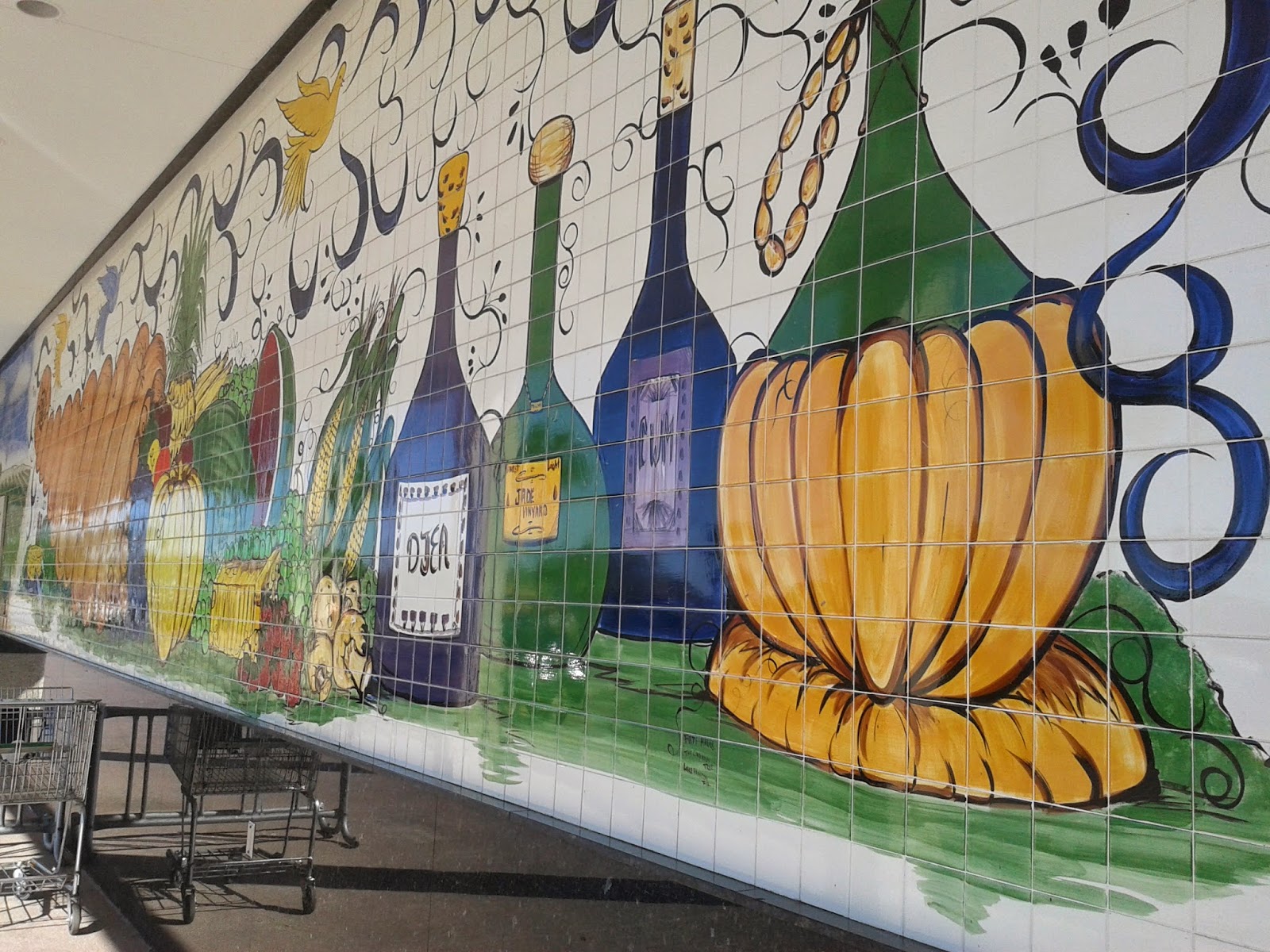 Now off the the much larger cornucopia mural over to the left side of the entrance. This is the right half of the mural, with fruits and vegetables spilling out of the cornucopia, leading to more bottles of wine. According to one article I saw, the average dimensions of one of these murals was 7 feet high by 62 feet long. Using 4"x4" tiles, if I did my math correctly, that comes out to an average of 3,906 tiles in one mural alone! My seemingly exaggerated title for this post is actually an understatement! 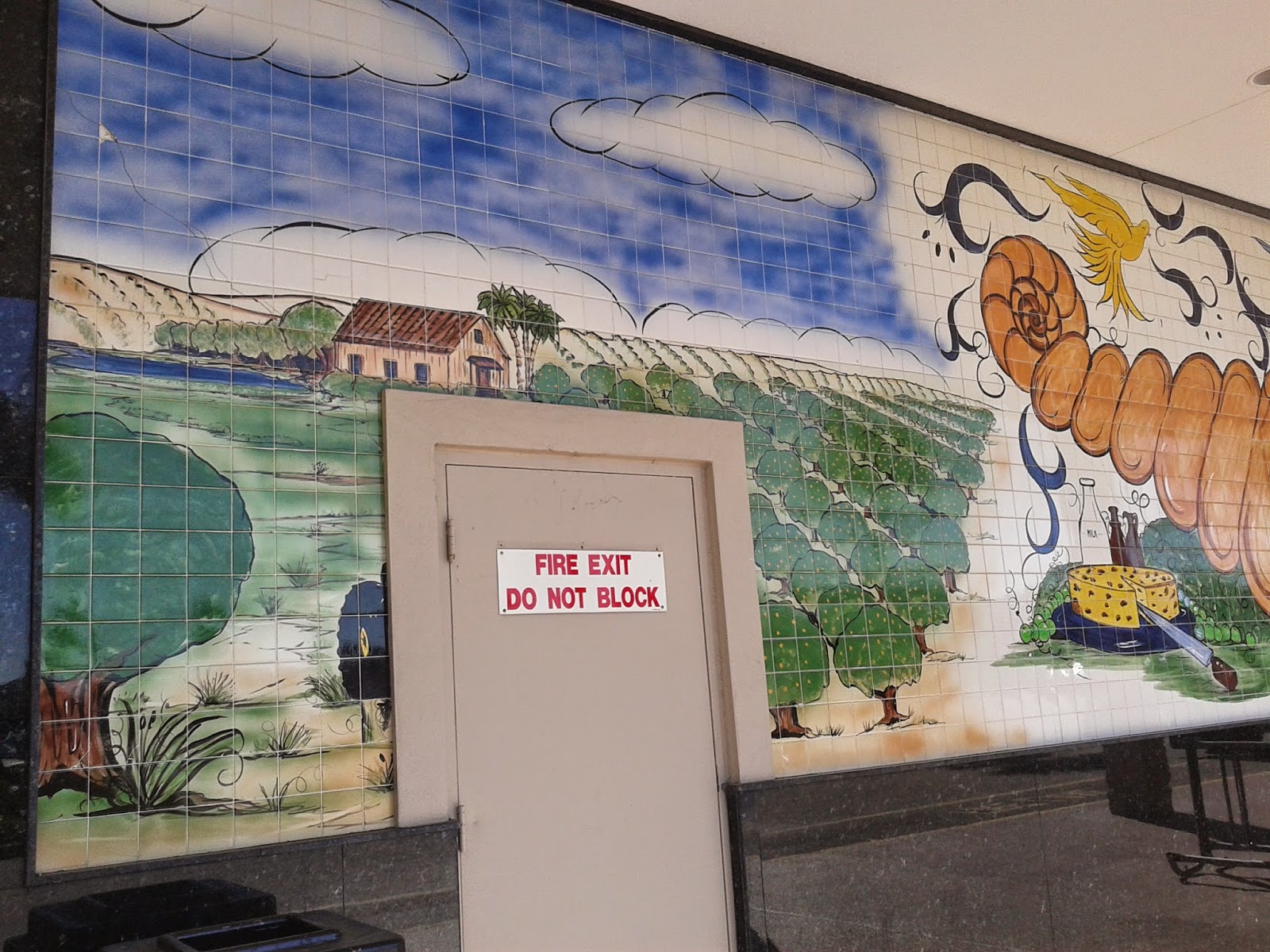 Over to the left half of the mural, which is supposed to represent one of Florida's many orange groves, which most modern Florida cities were built on top of. However, most of this orange grove was chopped down when that fire door was put in, which I'm sure is not original to this store. This door had to be added when this store was remodeled and expanded in the mid-90's. 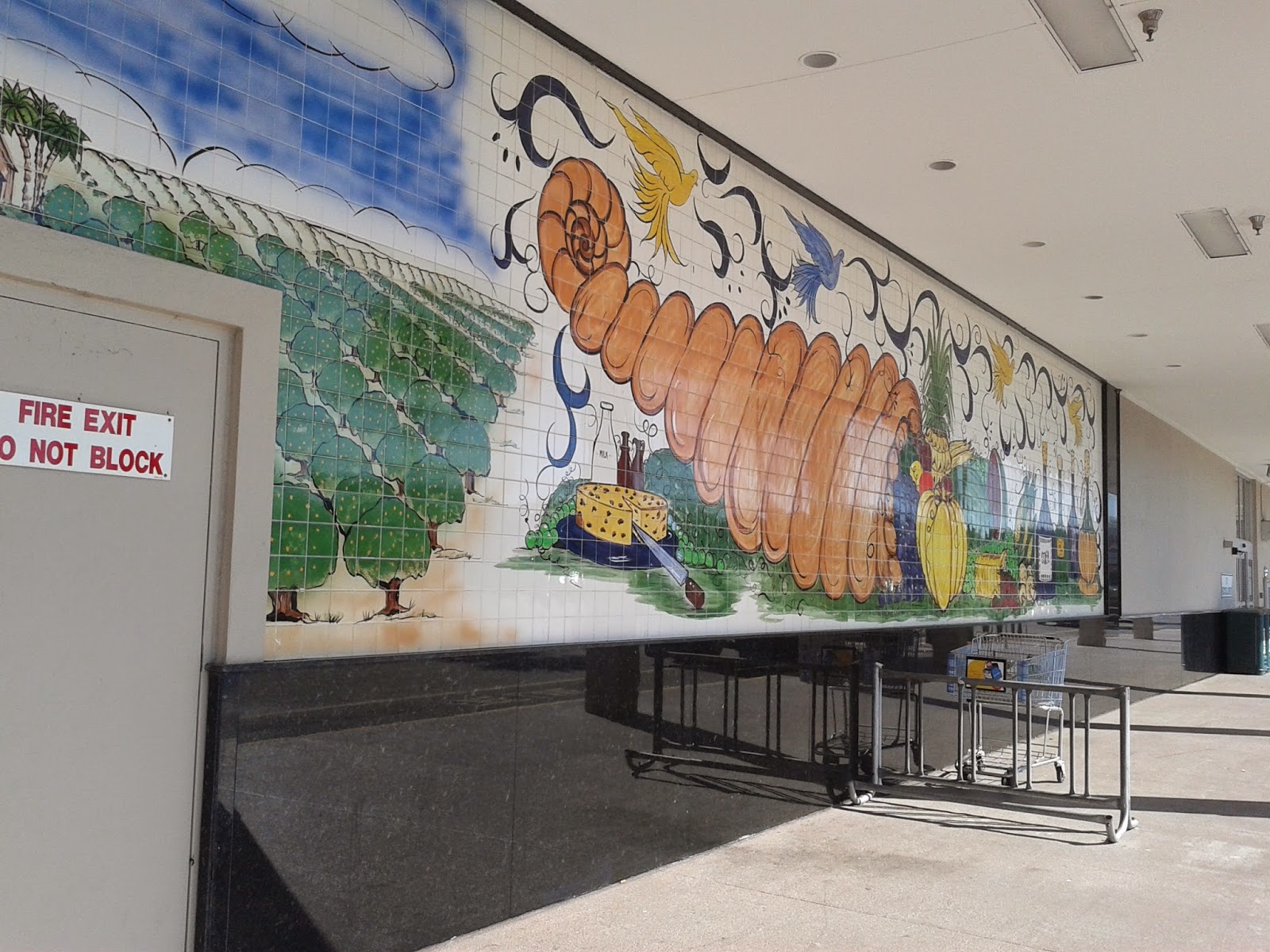 This was the best panoramic type shot I could get of the cornucopia mural considering its size. 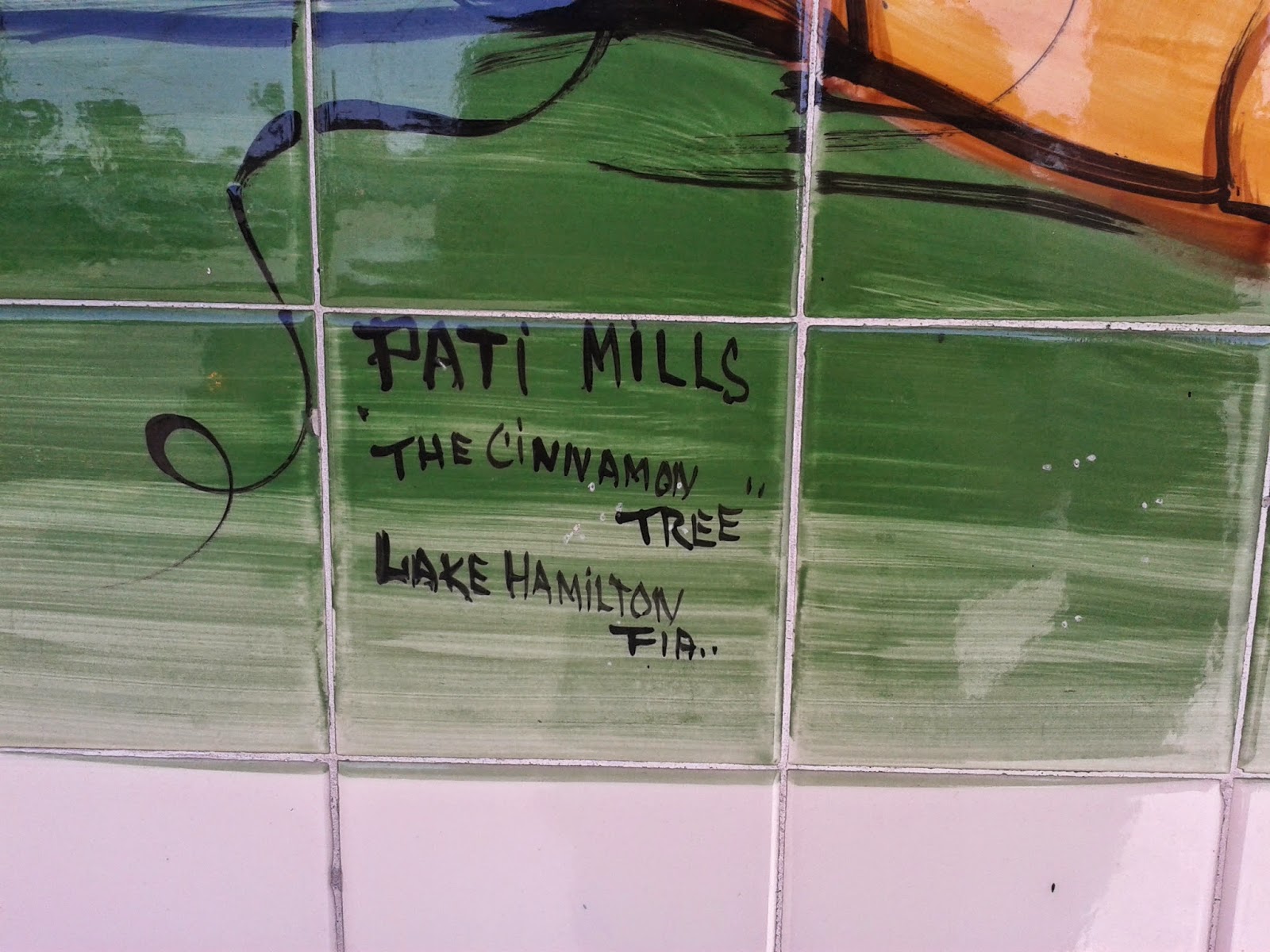 Over to the very right of the cornucopia mural in the bottom corner was Pati Mills' signature. This photo also gives you a close up to where you can actually see the brush strokes.

While must Publix stores had a mural similar to the one above, some stores had specialty murals to compliment the city or region that store was in. The next Publix mural we're going to look at has one of those specialty murals. This store is Publix Store #202, which is located at 3200 Lake Washington Road in Melbourne, FL, in the Lake Washington Crossings shopping center. 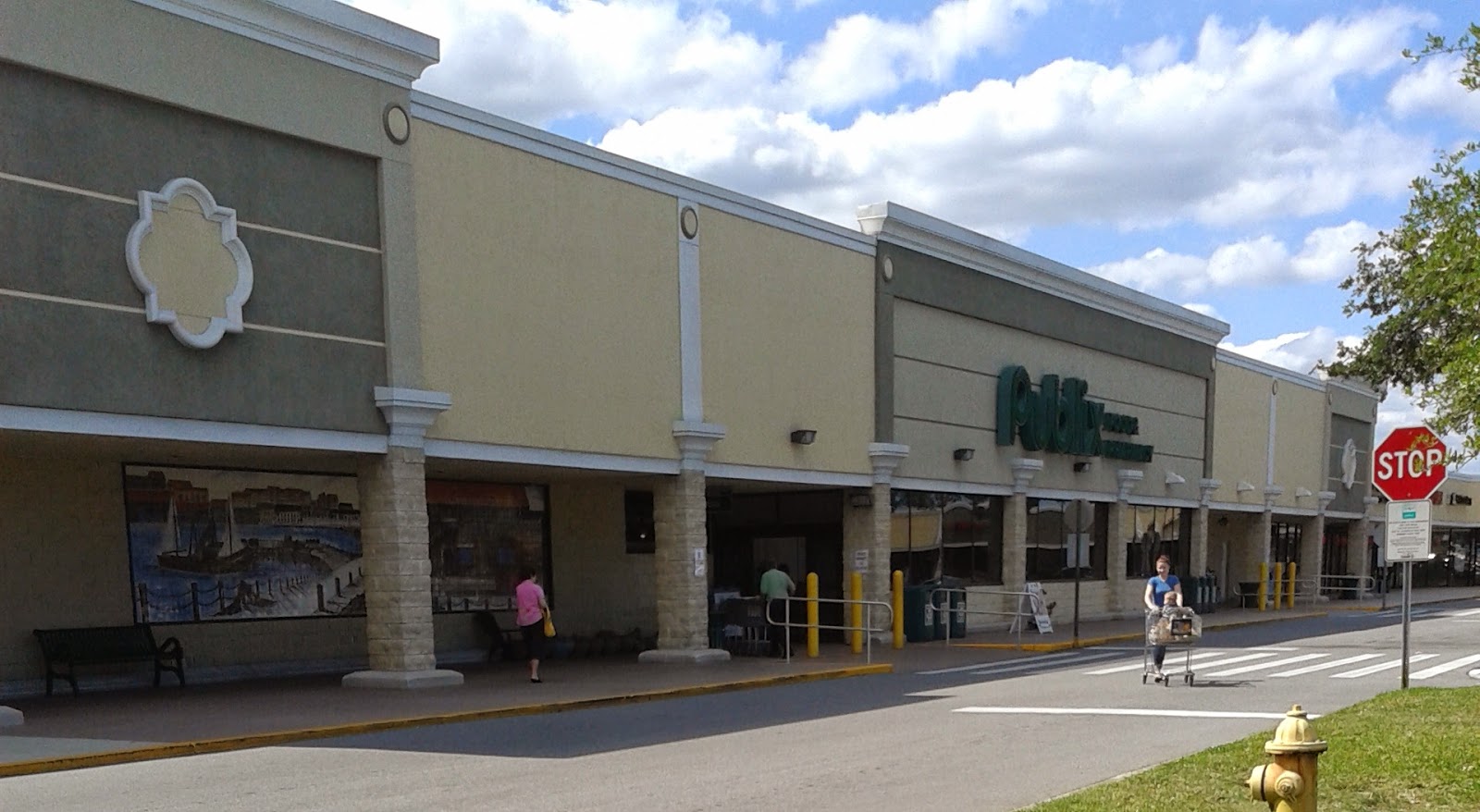 This is another older Publix store that's had a facade upgrade in recent years. This store was in the process of getting upgraded to the 3rd Generation Classy Market interior when I visited. This store only has one tile mural, which you can see to the far left in the above photo. 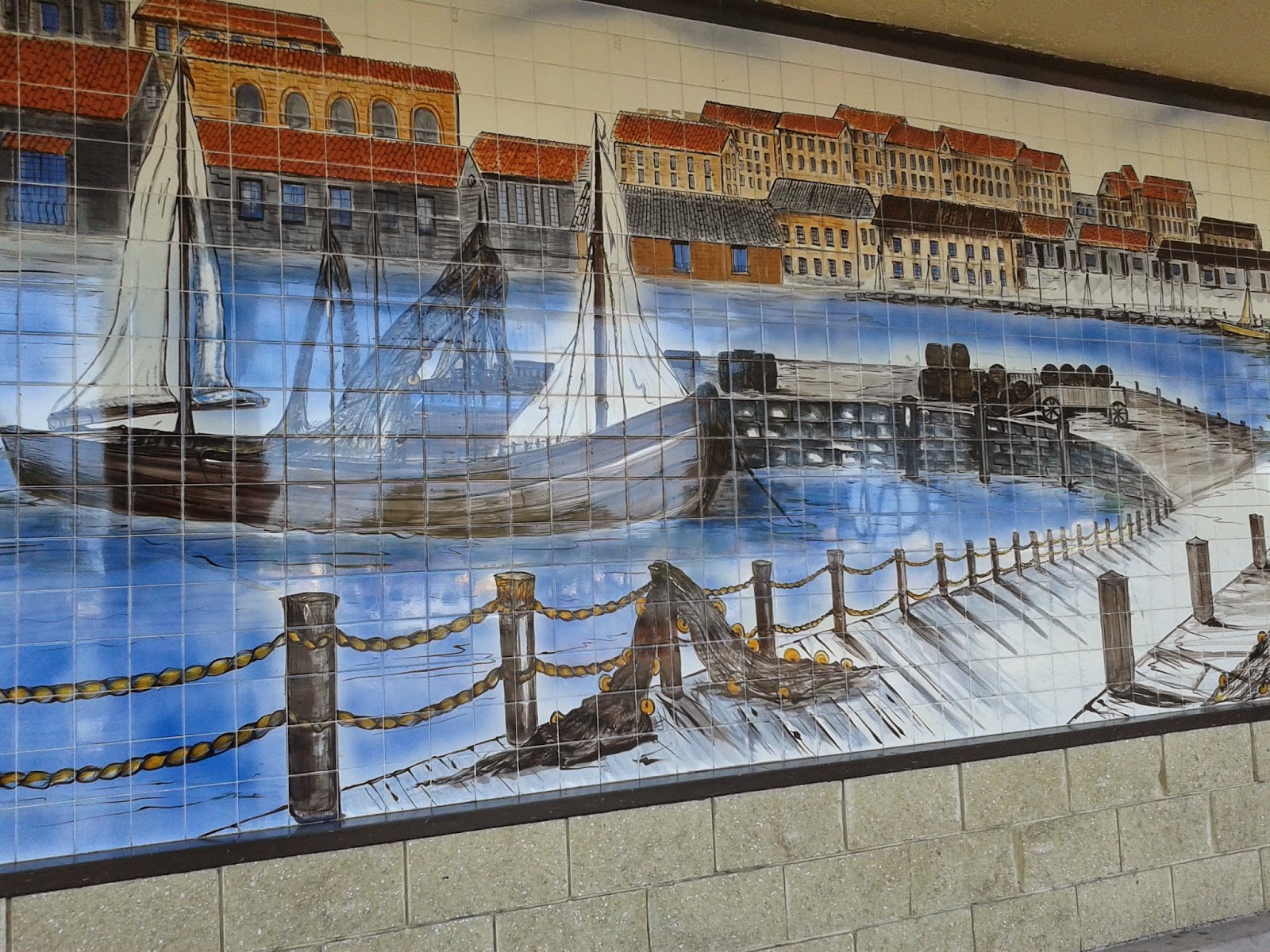 The mural for this store has a waterfront/harbor theme, which I assume was done because the city of Melbourne has dubbed themselves "The Harbor City". Above is the left half of this store's mural, which is more of a medium sized one. This half shows boats moored at a dock with old fashioned (somewhat European styled) buildings in the background. 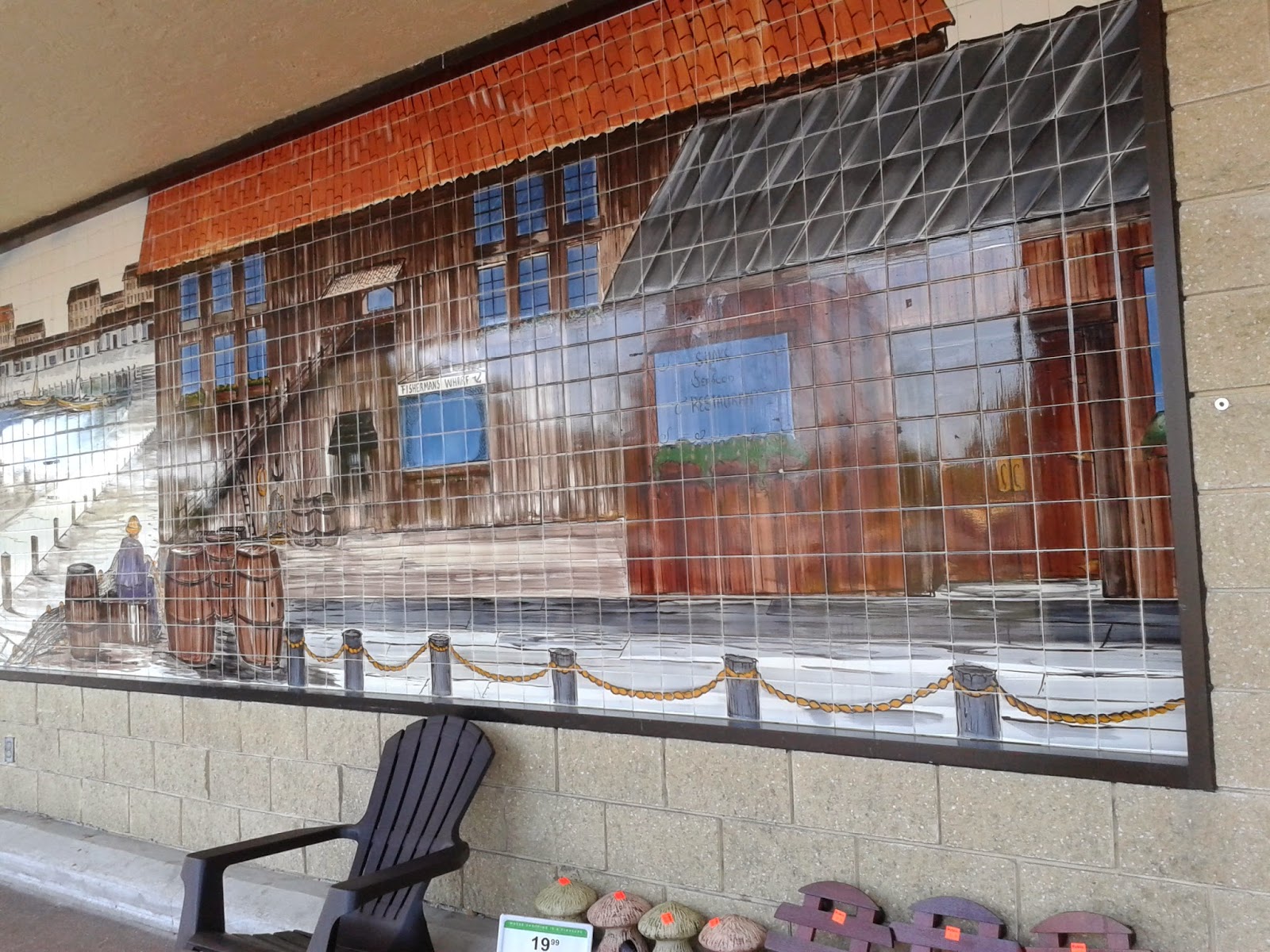 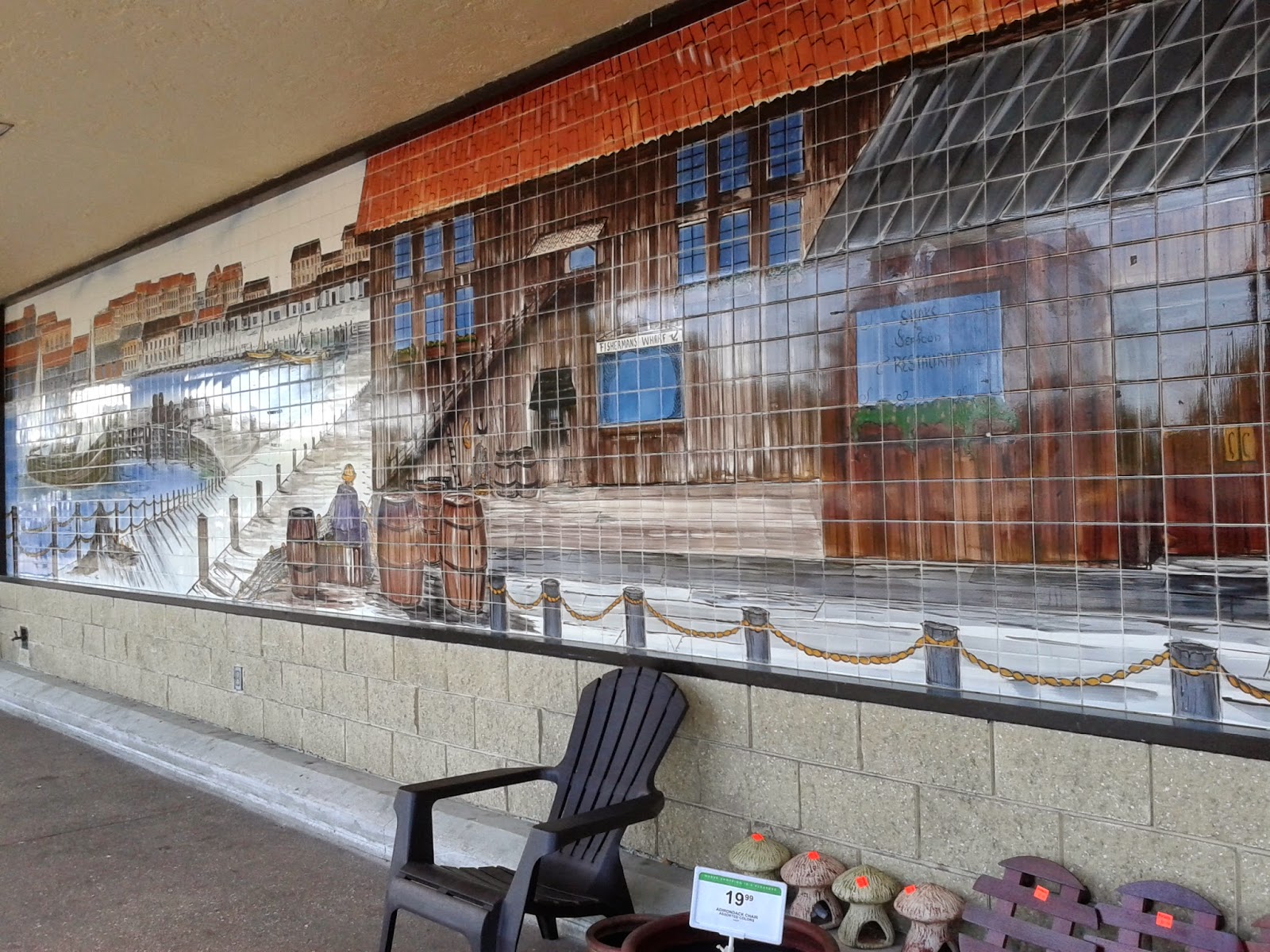 And here's a panoramic overview of the entire harbor mural. I couldn't find the signature on this mural, but maybe I just didn't see it.

On my retail excursions I'll be on the lookout for more of these murals. As I've mentioned before, Publix likes to keep their stores up to date, which means many stores that have had these murals have been abandoned or torn down as Publix builds new stores. These murals are practically impossible to preserve if the store is set for demolition. These tiles are stuck on the wall really good and they get brittle from being in the harsh sun for so many years (and removing brittle fragile tiles from a wall is not an easy chore if you want them all out in one piece). The only way to successfully preserve one of these murals would be to cut out the entire wall in one piece, which would be expensive and hard to transport. There's a really good article of a group in Temple Terrace, FL who fought to save their Publix mural when their old Publix store was set for demolition as a part of a downtown redevelopment plan. Unfortunately, those plans weren't successful, and in the end they had to settle on hiring a professional photographer to do a panoramic photograph the entire mural, and after the store was demolished, the tile fragments were collected to be used in stepping stones to be placed throughout the city. To read that article, click here.
As for the murals shown in this post, the one at the Lake Washington Crossings store still has some time left on it since, like I mentioned earlier, that store is currently getting an interior remodel (the mural should be left alone during this process). The Palm Bay Center store doesn't seem like it's going anywhere anytime soon, but with Publix, you never know.

Pati Mills' Publix Murals are still remembered as one of Publix's classic features from the past, and are still admired by shoppers to this day at some stores, leaving one of the most famous artistic legacies in all of retail history. I'm going to try my best to photograph her murals as I find them. It must be hard for an artist to see their work being destroyed, like when the murals are lost when these Publix stores are demolished. Pati Mills had to have put hours into hand glazing all of those tiles! Pati is still doing art to this day, including tile murals (but no longer for Publix).

Also, I have more exterior and interior photos of the two Publix stores whose murals were shown above. Those photos should be coming to the Albertsons Florida Blog's Flickr Page in the near future.

For now, that's all I have. Come see us next Saturday for another tour of a former Albertsons!