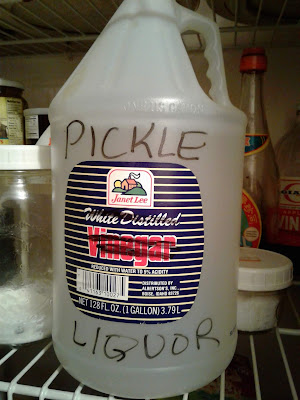 Here's a little bit of memorabilia for everybody today - specifically an old bottle of Albertsons' Janet Lee brand White Distilled Vinegar I spotted at an estate sale. Janet Lee was one of Albertsons' private label brands from 1959 through the 1990's, gaining its name from the daughter of Albertsons executive Wally Jordan. It was Wally Jordan who helped Joe Albertson launch the Janet Lee brand, which was the very first private label that Albertsons introduced. The Janet Lee logo you see on this bottle was the design used from the 1980's until the brand began to slowly fade away by the end of the 1990's. If I had to guess, the vinegar bottle you see in this photo probably dates back to the mid to late 1990's.

The pantry I found this bottle in looked like it was frozen in 1995, with many of the products in here featuring older graphic styles that I hadn't seen in years (for example, there's an old Giant-MD brand vinegar bottle peeking out in the background). It's amazing at just how long people hold onto some things for. I know vinegar is a product that can have a long shelf life if stored properly, but I'm not sure if I would want to cook with 25-ish year old vinegar myself, stored properly or not! Actually, there isn't even vinegar in this bottle anymore, as someone scratched out "White Distilled Vinegar" and wrote "Pickle Liquor" on it. I'm assuming "Pickle Liquor" refers to the brine mixture used when pickling vegetables (as referenced here, where water, salt, and other spices are added to the white vinegar base), and hopefully not this stuff! Either way, whatever kind of pickle liquor you come across in your travels, I can tell you this: neither makes for a good ingredient to put in a cocktail!

If you'd like to read more about the Janet Lee brand itself, this forum does a good job explaining the brand if you read through some of the posts. This infographic from Albertsons also explains the origins of the Janet Lee brand, and is an interesting read overall.

So that's all I have for now. Until the next post,