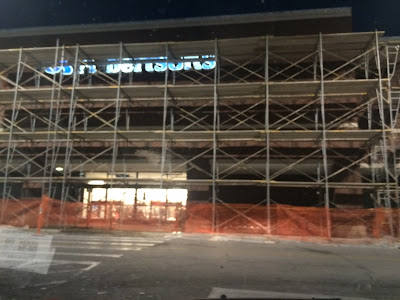 Today we have another checkup on the progress of the Albertsons Florida remodels thanks to AFB contributor Dave M., who has kindly sent in a few more pictures of the remodel at the Largo store. According to Dave, most of the major work inside the store has been completed except for some work around the deli island (my guess is that it is going to be removed). The other new development is that the exterior of the store has been wrapped with scaffolding, which you can see in the above photo. I don't know what they plan on doing to the exterior other than replacing the signage, and maybe doing some touch up work and a coat of fresh paint over the stuccoed areas, but all of that scaffolding seems like a bit of overkill for just that! I don't recall a major exterior overhaul being planned, so this will be something to watch. 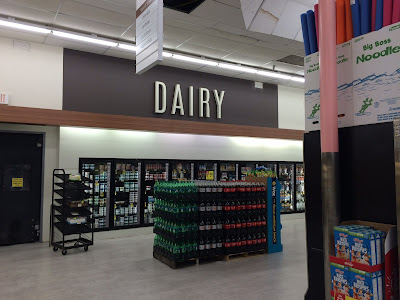 Now for a few updates from the inside. Most of the new decor has been installed, which we can see a sample from the dairy department in the photo above. The new decor isn't as dark as I was fearing, and doesn't look that bad actually now that I'm seeing the real thing. Hopefully Albertsons/Safeway gets around to replacing that stained ceiling tile above the Dairy sign where the ceiling angles upward. 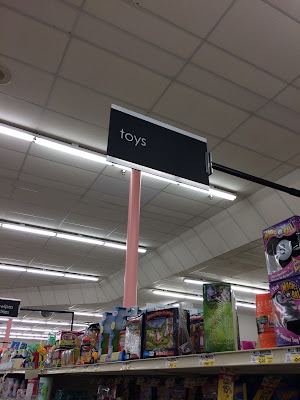 A sample of some of the new category markers in the grocery aisles.

The new Thank You sign over one of the side entrances to this store. I like the font they chose for "your Largo". I guess at this point it doesn't matter if the Safeway logo isn't covered up yet, as the store is beginning to feel more Safeway than Albertsons anyway. Who knows, future Albertsons may be getting this brown interior as well.

In only three months, Safeway Florida becomes official, and AFB will be here with any more updates that come out as we get closer to the transition. Thanks again Dave for sending in these pictures!