A Look at the Original Safeway Florida 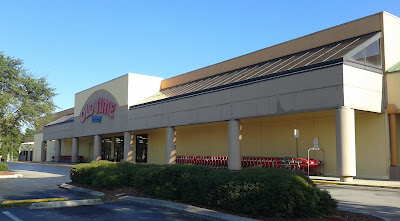 As the new Safeway Florida stores near their completion, I figured now would be a good time for this post...

As we all know, back in the 80's just about every major supermarket operator wanted to have a slice of the highly competitive Florida supermarket scene. For many years I was always under the impression that Safeway was the only major supermarket chain that wanted no part of all the madness going on in Florida at the time, where in some portions of the state there were 6-10 different grocery chains trying to compete with each other at once! However, Florida was a temptation that not even Safeway could resist back then. The thing about Safeway though, was that they decided to take a different approach with their Florida division. Rather than adding yet another supermarket chain to the already crowded mix, Safeway slipped into Florida by using a warehouse store format instead. So Safeway's entrance into Florida marked the birth of Save and Pack. Save and Pack was a spin-off of Safeway's Northern California discount/warehouse division called Pak n' Save. The Florida stores were originally supposed to be called Pak n' Save as well, until the now defunct Jacksonville based grocery chain called Pic n' Save claimed that the Pak n' Save name was too similar to theirs, forcing Safeway to flip it into Save and Pack. I wrote a post about the history of Safeway's Save and Pack division back in May 2015, which includes a more detailed history on the short lived division, and the locations and background on the 9 locations that sprung out of it. You can read that post by clicking here.

Today, I want to focus on one of those nine Save and Pack locations - Save and Pack #3202 located in Casselberry, FL. This store was the 7th of the 9 stores to open, opening in March 1986 as the first (and only) Save and Pack to be located in the Orlando area. 1986 ended up being the last year a new Save and Pack stores opened (after only being launched in 1984), and decline began from there. Safeway closed this store and a Save and Pack in Pensacola on March 22, 1987, citing those two stores as unprofitable. The rest of the Save and Pack stores slowly closed from there, until Kash n' Karry bought the last three locations (all around Tampa) and the name from Safeway in 1992, ending the original Safeway Florida experiment. The store we'll be looking at today only lasted for a year under the Save and Pack name, yet it is one of only two of the nine Save and Pack stores to retain any of its original characteristics from the days of Safeway's ownership to today. In the year after Save and Pack closed this store, Builder's Square took over this building and opened a rather small sized store here in May 1988. Builder's Square lasted in this location until the chain's demise in 1999. After Builder's Square closed, the building sat empty until 2003, when the current occupant, Old Time Pottery, moved in. 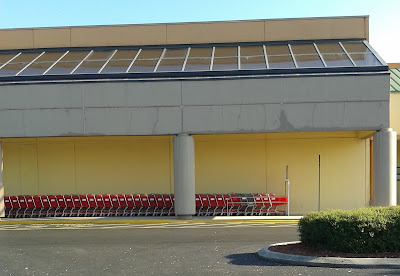 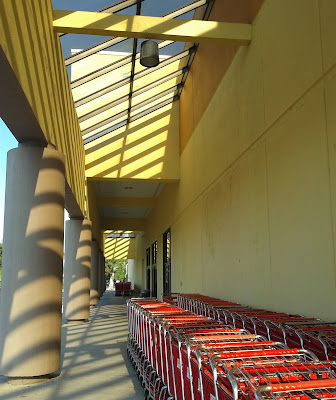 Looking across the front of the store from the front walkway at the right side of the building. I really like the look of the glass panels up there instead of a traditional ceiling. 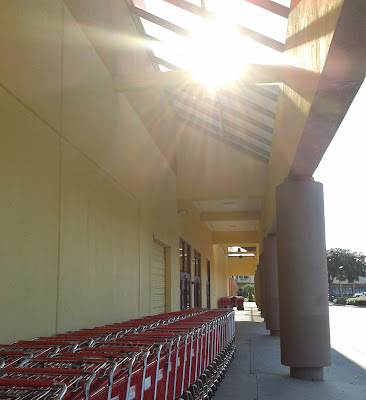 And looking across the front of the store from the other side. The only drawback about those glass panels - more glare in the pictures! 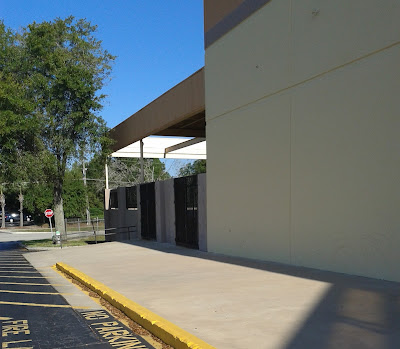 Builder's Sqaure added on a Garden Center when they took over this building, which you see the front of in the above photo. 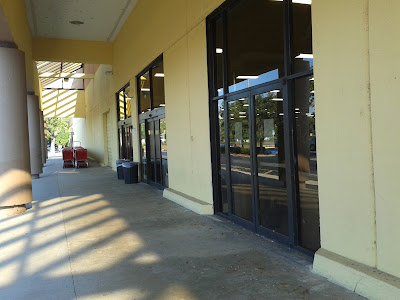 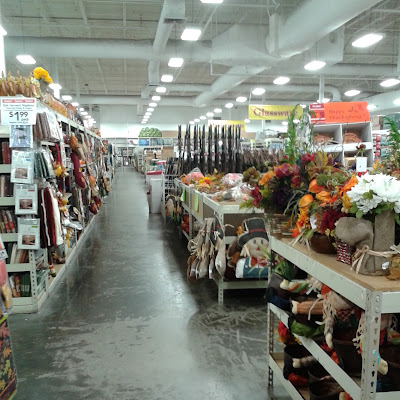 I can't speak much about what is and is not original on the inside of this place. Since Save and Pack was a warehouse style store, I'd imaging the warehouse ceiling was original, and the unfinished concrete floors as well. For those of you unfamiliar with Old Time Pottery, they're a chain of stores in the Southeast and Midwest that's basically the Big Lots of home decor stuff. And they carry very little actual pottery. This picture is looking toward the back of the right side of the store. 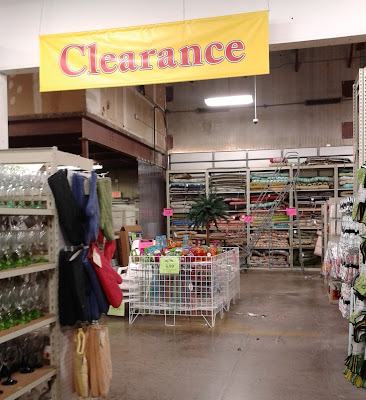 Over on the right side of the building was was this strange little cutout housing OTP's clearance department. 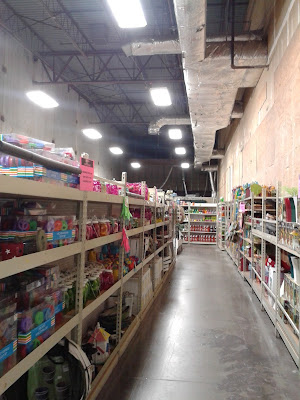 Inside the Clearance department, looking toward the back. I think this area was originally backroom space of some kind when Save and Pack was here, which OTP has since turned into sales space. 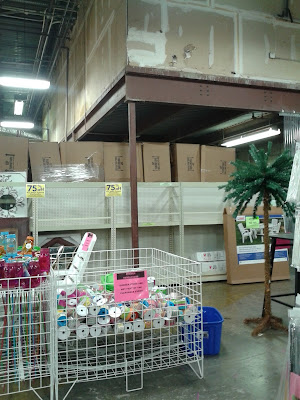 The back most portion of the area housing the Clearance department was blocked off so it could be used for actual backroom space. You can also see a mezzanine level as well, probably home to the breakroom and offices. 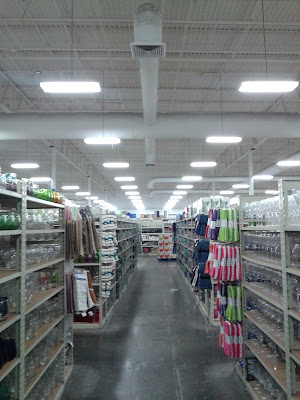 Let's go back out into the main store and take a quick look around... 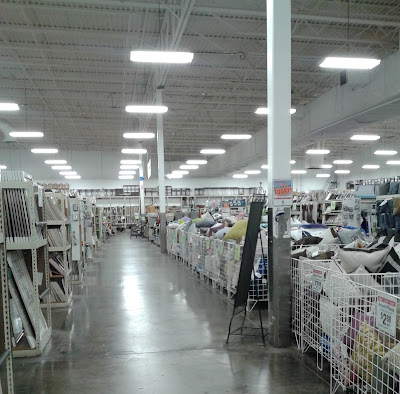 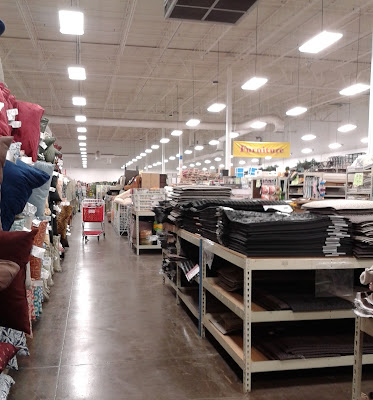 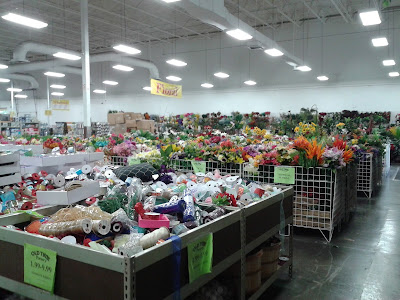 So many fake flowers... 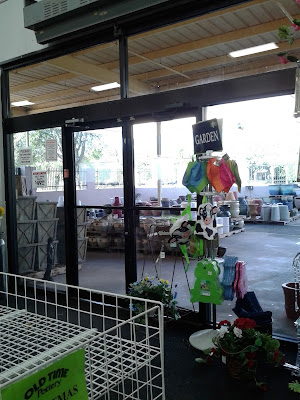 The door out to the Garden Center added on by Builder's Square, located behind the forest of fake flowers. Old Time Pottery still uses the old Garden Center. 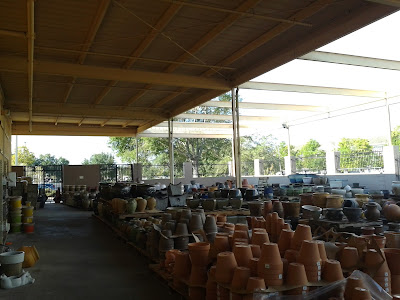 The Garden Center was the only place where I saw any kind of actual pottery at Old Time Pottery. And they sure had a lot of flower pots too.

Now that we've seen the Garden Center (that wasn't even original to Save and Pack to begin with), we've pretty much covered everything we need to see inside this place. 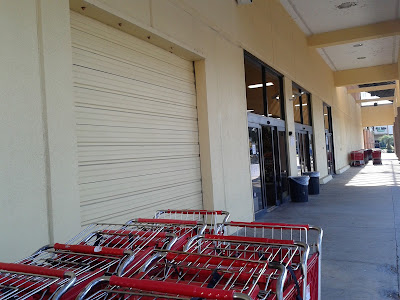 Heading back outside. Over to the left of the main entrance was this garage door. I'm not sure if Builder's Square added this in, or if this is original to Save and Pack. I know some warehouse stores, especially some of the older ones, used garage doors as the main entrance and exit rather than traditional doors. Some Costcos still use that setup today.

Now for some views of this building from up in the sky thanks to Bing Map's Bird's Eye aerial images: 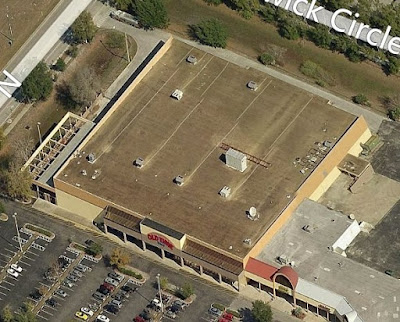 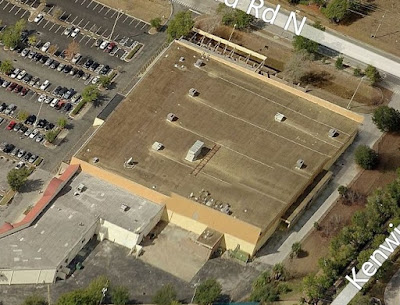 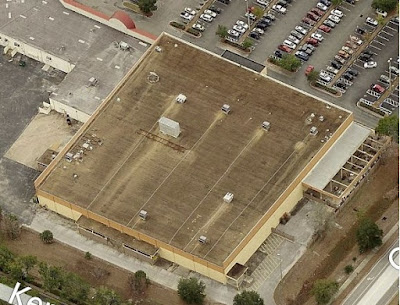 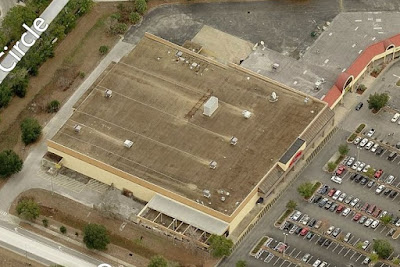 And now for some historic aerial images courtesy of Google Earth and historicaerials.com: 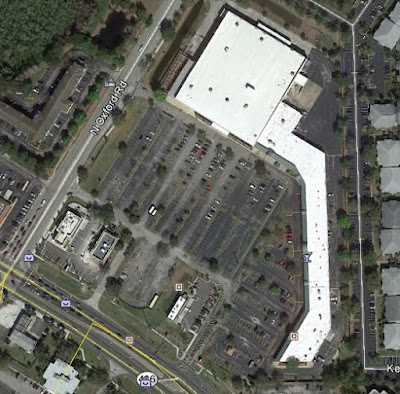 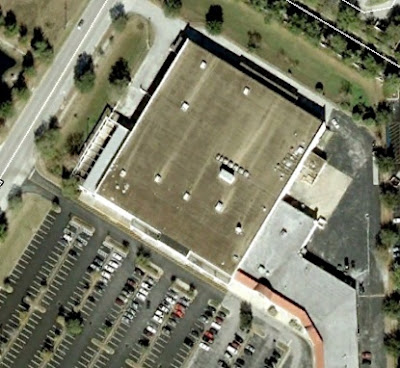 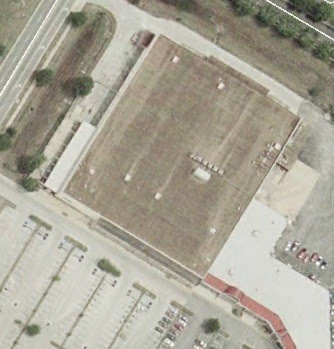 Former Save and Pack #3202 - 2002 - Old Time Pottery hasn't moved in yet. You can also see the original, unaltered greenhouse awning in this image. 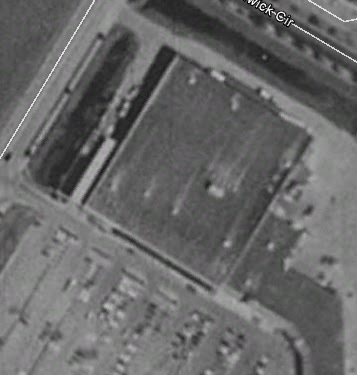 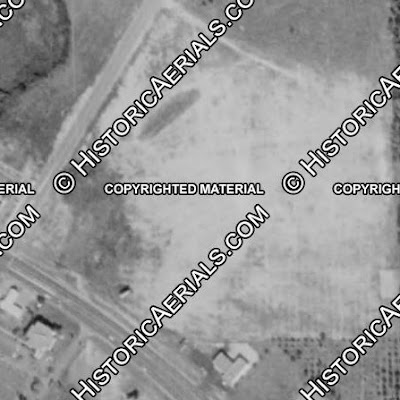 Just one last satellite image that I wanted to share, showing the proximity of the old Casselberry Save and Pack (the Safeway logo to the far right of the image) to the soon to be new Altamonte Springs Safeway (Safeway logo to the left side if the image). The old and the new are only 2.5 miles apart from each other. Who would have ever thought that 20 years later, Safeway would be coming back to Florida?

But as we all found out, Safeway will be making their return to Florida, this time under their own name, and as part of a completely new company. I don't think many people outside of the community that follows AFB even realize that this will be Safeway's second time in Florida in some form. Save and Pack faded into obscurity pretty fast, and there isn't much information out there that they even existed. Anyway, the photo above is of the former Altamonte Springs Albertsons, soon to be Altamonte Springs Safeway (which you can take an extensive look at here). Honestly, now is probably the better time for Safeway to be making an entrance into Florida, as the odds of success will be better for them now than they were back in the late 80's. Even with Publix's power, there just isn't much competition anymore. If Safeway can find their niche, I think this could turn into something great. Here's to hoping that the new Safeway Florida can become more successful than the original!