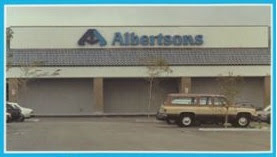 A big thanks to new AFB contributor William S. for sending us this picture! This is a very rare photo of former Albertsons #4365 in Jupiter, FL back when it was still an Albertsons. This store opened in 1987, and closed in the summer of 1990, lasting barely 3 years. Albertsons cited the sudden and early closure of this store as "a real estate mistake". To read more about the history of this store and to see more of how it looks today, you can read the original post from this store here. 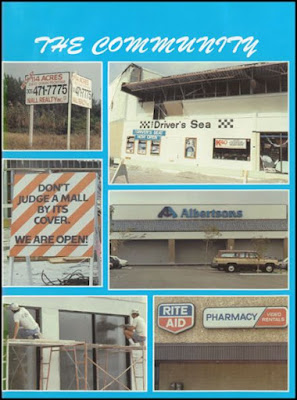 William found this picture in the 1988 Jupiter High School Yearbook. He sent a scan of the entire page, which looks to be a page showcasing new construction/new businesses in town. I don't know anything about the places/things seen in the top two pictures, or the bottom left one. The picture of the sign that says "Don't judge a mall by it's cover - we are open!" is a reference to the Jupiter Mall. The Jupiter Mall was a very tiny enclosed mall built in 1980, with Bealls Department Store and what is now an 18 Screen movie theater (currently Cineopolis, but it's changed hands too many times to know the original occupant) as anchors. The Jupiter mall was located across the street from the Albertsons, directly to the north. By the late 80's, the owners of the mall decided to convert it into a more traditional shopping center, which the sign is probably a reference to. (Side note: That information you just read on the Jupiter Mall was courtesy of AFB contributor Graham S., who mentioned that in the comments section of 4365's original post - Thanks!) The Rite Aid you see on the bottom right was also a tenant of the Jupiter Mall... 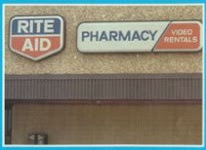 ...And it's not too often you see a picture of a live Florida Rite Aid either! Rite Aid entered Florida after purchasing the Florida locations of Kroger's SupeRx chain of drug stores (a separate entity from Kroger's SupeRx Food and Drug stores, which became Florida Choice around the same time). Right Aid bought a total of 187 stores from SupeRx, including the one in the Jupiter Mall, and the stores were converted into Rite Aids in 1987. Rite Aid built a few stores on their own in Florida after the acquisition (all of which were in shopping centers, to the best of my knowledge, but are fairly rare). They also had a distribution center in Melbourne (not sure if it was acquired from SupeRx or if Right Aid built it/purchased the building themselves). Either way, Walgreens and Eckerd proved to be too powerful in Florida for Rite Aid, and in 1995 Rite Aid announced they would be pulling out of Florida completely. The former Jupiter Mall Rite Aid is now a Staples, which expanded into some of the storefronts that used to be next to the original Rite Aid space. 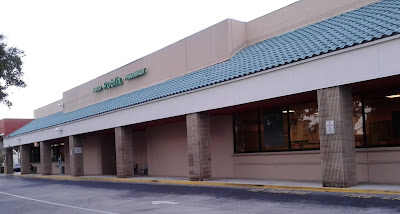 Tangents about dead malls and (soon to be dead if Walgreens gets their way) drug store chains aside, I'll wrap up this rather short post with a picture of the front of former Albertsons #4365 from only a few months ago. It looks exactly the same as in the picture from 1988, honestly, just with the minuscule Publix sign where the old Albertsons one once was.

Thanks for the little trip back in time, William! William has also sent in a few other classic Albertsons photos that will be making their way to the blog in the future.

Anyway, that's all for now. Until the next time,