Florida, Meet Safeway - And other Albertsons and Florida Supermarket News

I'm going to apologize in advance for my horrible photo editing skills:

So it looks like 2016 is off to a busy start for Florida supermarkets and retail. Back on the 11th, Albertsons made their official public release confirming the conversions of the remaining three Albertsons Florida stores to the Safeway brand. It's a bittersweet moment, as Florida loses yet another supermarket chain to the grasp of Publix. At least out of this loss there will be a gain, as Safeway will be making their grand entrance into Florida under their name for the first time. Safeway did have a very short presence in Florida back in the late 80's and early 90's under the Save and Pack name. Save and Pack, however, was a warehouse style store, kind of like a Sam's Club/Save A Lot hybrid type place, and not a true supermarket. If you would like to read more about Save and Pack, check out this post I did about them here, which also includes a list of Save and Pack's former locations.

Albertsons is planning to spend around $10 million between the three stores to upgrade them to Safeway. According Sidney Hopper, president of Albertsons' Houston Division, the remodels will bring "contemporary décor packages, new digital signs and menu boards, a natural/organic zone and living well products. The stores will also feature expanded specialty foods selections, more local products, expanded floral and wine areas, enhanced food service offerings and new Starbucks in each location." These stores are finally getting the love they have long been deprived of, and hopefully their new offerings can help them better compete with Publix.

From reading quite a few articles about the conversions, and the e-mails and comments that have been coming into the blog recently about them, all the speculation seems to be pointing to one thing: There are probably more Safeways coming if Albertsons is going through all of this effort with only three stores. More than likely, if more Safeways are to open, most of the new locations would be in existing buildings or through the acquisition of some or all locations from another chain (with the most likely candidate being Winn-Dixie). I hope the new name means a new start for Albertsons, and that Safeway will be able to fend off Publix and possibly grow to more than three stores. It doesn't really make sense to rebrand three random stores if there wasn't some kind of larger goal out there. I guess we'll just have to wait and see what that is going to be.

Like I mentioned the other day, I'll be compiling a separate store list for Safeway Florida locations sometime in the near future and adding it to the blog. The main focus of this blog will still be the Albertsons Florida stores which operated from 1974-2016. If Safeway does end up exploding to a bunch of locations outside of these three, I'll see how to go from there. They technically are still Albertsons Florida, but I'll worry about that later.

Keep scrolling down for some other news about some former Albertsons locations, and some tidbits from Publix and Winn-Dixie:

The Fate Has Been Determined for the Former Vero Beach Albertsons 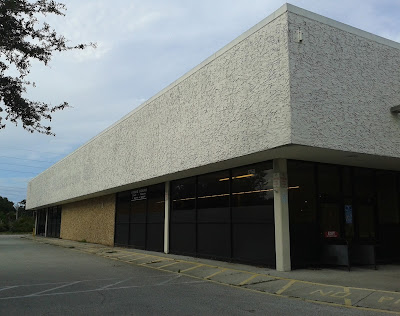 A new store will be opening at the site of the former Vero Beach Albertsons, which closed on June 9, 2012. The store opening here is the one I figured would eventually end up opening here: our old pal Walmart Neighborhood Market. I had a feeling Walmart would want this place. Walmart doesn't have any presence on this side of town since they relocated from their old discount store on US 1 to a new discount store on the western fringes of town on Route 60 back in the mid-90's. The new discount store was converted into a Supercenter only two or three years after it was built. Publix has two stores on this side of town, Winn-Dixie has none, and there's a Fresh Market as well. After seeing what Walmart did to the former St. Lucie West Albertsons (#4466), I'm sure there won't be much of Albertsons left once Walmart begins construction. There's also a good chance Walmart might just tear the old building down for and build from scratch. If you would like to check out the Vero Beach Albertsons, this store was featured on AFB back in October 2015, and you can read the post here. I went picture crazy when I came to this store that day, so it's past life won't be forgotten. I was by this store two weeks ago, and it was still empty for the time being as Walmart gets everything settled in order to start construction. I found this article mentioning Walmart's interest in the building, which you can read here. Thank you to the friend of AFB that alerted me to this, and the next little piece below:

The Fate Has been Determined for the Former Valrico Albertsons

This Albertsons opened in 1997, and was another casualty from June 9, 2012. It has been sitting empty since then. However, Albertsons has just recently sold the property to a natural foods supermarket. From the property record, I think (but am not completely sure) that natural foods store is Whole Foods. The new property owner's name is coded on the property record as WEG Valrico. WEG is an acronym meaning Whole Earth Generation that Whole Foods uses. (I know someone out there was thinking this when they saw WEG Valrico - No, Wegmans is not coming to Florida). I'm not completely sure the new occupant is Whole Foods or if my theory is right, but a natural foods store of some type is going to be moving in here. Whole Foods currently has two stores in Tampa, but none out in the suburbs of Hillsborough County, where this store is located. There is already a Fresh Market less than a mile away from here that opened in 2014, along with a Publix that's been around since the 2000's. If the new occupant is Whole Foods, they will probably be doing some work to the building. I don't have any pictures of this store, so if you happen to be by it, feel free to send any pictures in.

Publix's current CEO, Ed Crenshaw, announced that he will be retiring on April 30, 2016, although he will continue to serve on the board of directors after retiring. Crenshaw has been CEO at Publix since 2008, and has worked in various positions throughout the company for the last 42 years. Publix's new CEO will be Todd Jones, the company's current president. The big thing about this news is that this will be the first time in Publix's history that a descendant of their founder, George Jenkins, will not be serving as CEO. You can read an article about this on Supermarket News here. Thanks to the person who e-mailed this news in.

For the fourth time since 2009, Winn-Dixie has unveiled yet another new decor package. This new decor will replace the less than two year old "Green Interior". Winn-Dixie's new decor was timed to debut the same day that Winn-Dixie launched their new Down Down Prices ad campaign (complete with commercial), which is supposed to feature new, lower permanent prices throughout the store. The new decor jumps from that mostly green theme to a mostly red theme. I actually think the red looks better than the green, and red says Winn-Dixie more than light green did, but the green interior seemed classier. This store in Phenix City, AL was the first to get the new interior, although Winn-Dixie says they plan to remodel 50 stores to this look this year. You can read the original article about this store's remodel here (it has a few more pictures of the store as well). As for a name for this interior, I say we call it the "Down Down Interior". Let's see how long this look will last. Thanks to the commentor on the Winn-Dixie of the Future (now Winn-Dixie of the very distant past) post for giving me the link to that article.

That's all the news I have for now (which was quite a bit). Thanks again to all the people who sent in links or information about all of these news pieces. I'll be sure to stay on top of the Safeway conversions, and let everyone know if anything else happens. More Albertsons coming this Sunday!