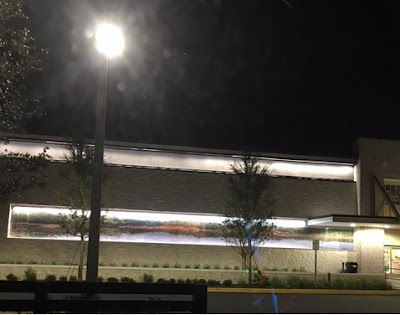 Back in August, I did a quick blog post about the opening of Publix #1567 in Winter Garden, FL (see that post here). Specifically, I was interested in the fact that this new Publix included a mural on the front of the building, a throwback to the days of the classic Publix tile murals of the late 1950's through 1980's. Recently, AFB contributor Rob Z., who sent in those photos for the original post, sent in a few more photos of this particular mural. In the original post, I thought this mural was just a painting on the wall as I had only seen it from afar. Upon Rob's closer inspection, it turns out this mural is indeed made of tiles just like the original ones were! We'll take a closer look at that in just a moment though. This first photo shows how Publix went through the trouble of having lighting installed around the perimeter of this mural in order to light it up at night. This was a first for both Rob and myself to see, as neither of us have ever seen lighting installed around one of the classic murals. 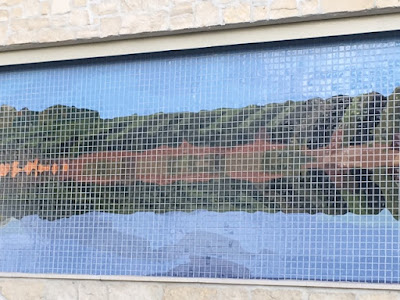 The photos above and below show close-ups of the tiles themselves. This mural depicts an orange grove, which is what this Publix was built on top of, and acts as a nod to this site's past. I like how Publix decided to revive this longtime tradition of installing tile murals at their stores. I'm just curious to see if this was a one-off special case, or if more modern tiles murals will begin to pop up at select new Publix stores going forward. 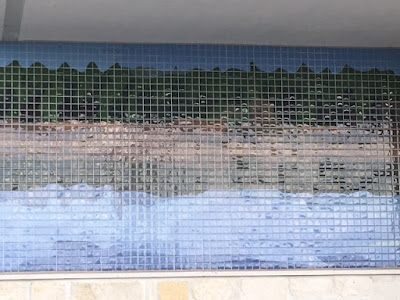 Thanks again Rob for sending in these photos and updates!