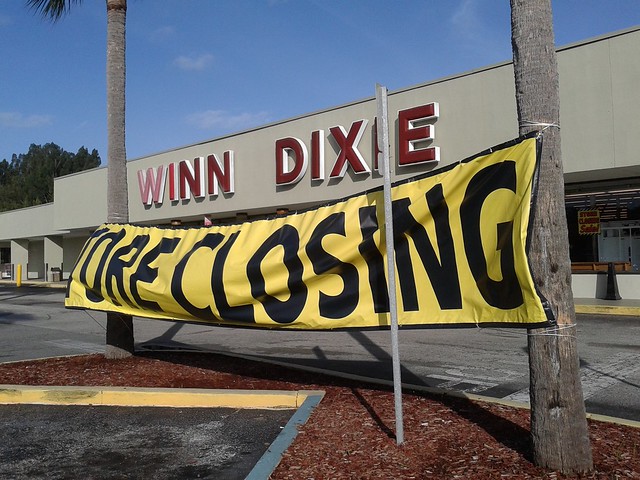 After a good long while of silent one-off closures, Winn-Dixie's parent company has announced that 20 Winn-Dixie, BI-LO, and Harvey's stores will be closing this summer, the first mass round of store closings the company has done since 2014. I figured SEG would have to do a closing round at some point considering their lackluster financial state. Winn-Dixie isn't releasing a complete list of the closing stores, so this is what I was able to come up with for what may be the 20 effected stores online. All of the following stores are confirmed to be closing by July 2017:

Update 5/14/2017 - Two more South Carolina BI-LO stores have been announced to be closing. It appears this closing round will not be stopping at 20...

Update 5/17/2017 - The BI-LO in Irmo, SC was announced to be closing. South Carolina will now be losing 7 BI-LO stores total, the most closings in any of the effected states.

Not a part of this round, but a Winn-Dixie in Belleview, FL (Store #2205 - 10393 US 441) closed earlier this year. That store was silently closed in order for the town's other store (an ex-Sweetbay) to get the current "Down Down" remodel. I'm not sure about BI-LO, but that was the only other 2017 closing I can think of out of Winn-Dixie. In total, the list above includes 20 stores, so that should be all of the effected stores. However, I wouldn't doubt it if one or two more stray closures pop up in the near future. Thank you Jackson C., WilliamMillicanHSC4564, Google, and others for helping in the compilation of this list! If you know of any other effected Winn-Dixie, BI-LO, or Harvey's stores that will be closing this summer, please let me know and I will add it to this list.