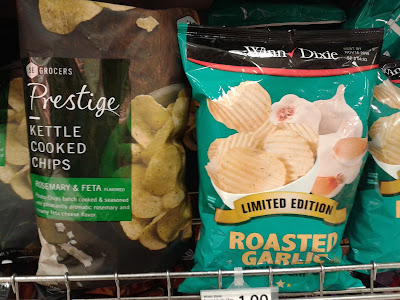 Over the last few months, I've been noticing a new house brand popping up at Winn-Dixie: SE Grocers brand. The first time I spotted this brand it was on the bag of chips you see above, branded as SE Grocers Prestige. I thought this was just Winn-Dixie's attempt at a higher-end house brand to accompany the existing Winn-Dixie brand, but then a few weeks later I saw this: 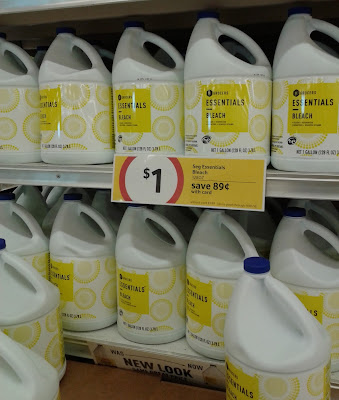 Along with the chips, I began to see large displays of SE Grocers Essentials bleach, which according to that partially blocked tag in the photo, will be replacing the current value oriented house brand that Winn-Dixie uses called Clear Value. For a while I was only seeing the bleach and potato chips with this new branding, but in the last few weeks more and more SE Grocers Prestige, SE Grocers Essentials, and generic SE Grocers branded items have been finding their way to the shelves, leading me to believe that after nearly 5 years as a combined entity, Winn-Dixie and BI-LO are retiring their longtime Winn-Dixie and Southern Home house brands for this new, homogenized SE Grocers branding. Considering how most other large grocery chains have homogenized their brands into a single generic brand to share among each banner, I guess Southeastern Grocers would have eventually done the same themselves. I haven't found any articles or press releases from SEG about the rollout of this new brand, and Winn-Dixie.com only mentions the existence of SE Grocers Prestige Pasta Sauce in the "Our Brands" section of their website (as of when I wrote this). Back in October 2016, SEG made an official announcement about their new pet brand Whiskers & Tails, but nothing about the SE Grocers brand being introduced.

I just wanted to share with everyone this little bit of news. Remember to check back next Sunday for the next feature post!