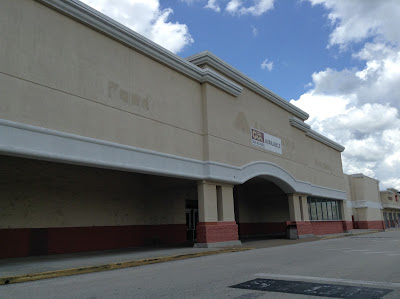 ***Photos of this Store and the Bonus Store at the bottom of this post are Courtesy of Kristin C.***

Sorry, this post was supposed to auto upload this morning, but I forgot to click the schedule button. Anyway, without any further delay, here it is:

Thanks to new contributor Kristin C., today we'll take a quick look at the former Valrico Albertsons. Valrico is an inland suburb of Tampa, located in the eastern portion of Hillsborough County where suburbia begins to fizzle out in exchange for larger tracts of land. The Valrico area began to turn from semi-rural into more suburban in the late-80's and early-90's, as development of the Tampa metro area began to push further inland. With all of this new growth coming about, Albertsons joined in and opened a new store in this area in 1997. This store was built in the style of a typical mid-90's model store, with the single entry/exit under the main arch. This store survived all of the rounds of Albertsons Florida closures until the 2012 near-exodus of Florida closure sweep that sent Albertsons down to 4 Florida locations from 17. This store closed for good on June 9, 2012, and is still empty as of my writing of this. A reliable source had informed me that a "natural foods grocer" was interested in this building, but it seems like nothing has come from that claim yet, as the building is still sitting like this.

UPDATE 10/26/2016 - It has been confirmed from this article that Sprout's Farmer's Market will be opening up in this building sometime in 2017 as a part of their entrance into Florida, which includes a few other stores throughout the Tampa area that will also open in 2017. 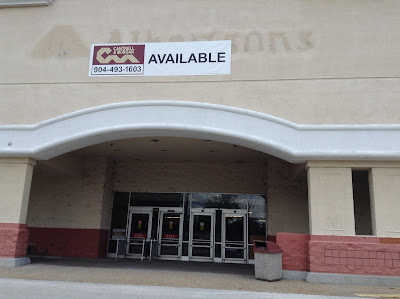 Here you can see the Albertsons labelscar much clearer (although partially blocked by that 'available' sign), as well as the typical mid-90's style entryway. 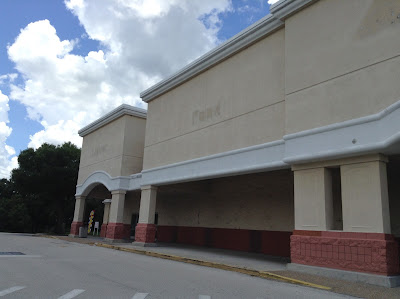 The left side of the store, with the liquor store off at the edge of the building. The Food labelscar is visible in this photo. 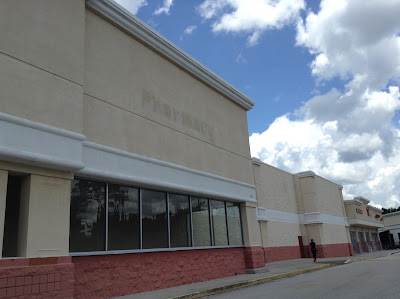 The right side of the building. Behind those windows was the cart storage area. The windowed in cart storage area was another typical trait for these mid-90's stores. Pharmacy labelscar is also visible above the windows. 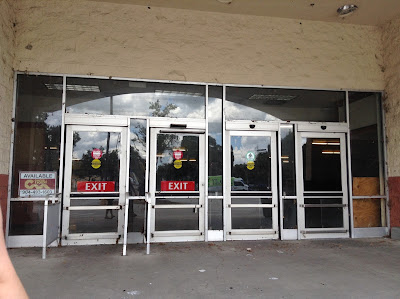 Closeup of the entrance and exit doors. Albertsons' exit decals are still up on the exit doors. 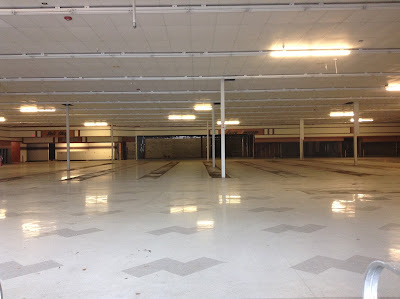 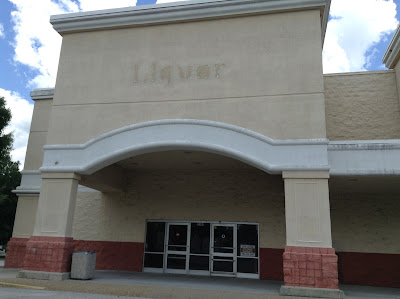 Moving along from the interior to a closeup of the former Liquor Store. 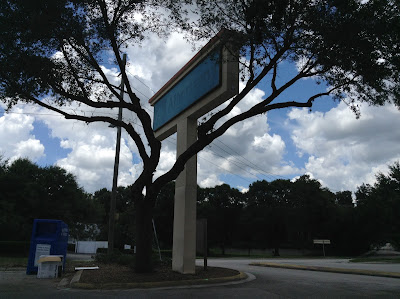 And last but not least, the road sign facing out to Miller Road, which runs along the left side of the building. 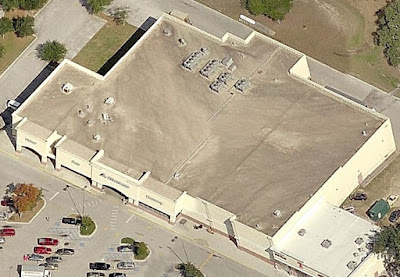 To wrap up this Quick Glimpse post, here are some aerial images of this store. First is this Bing Maps Bird's Eye aerial image of the store, showing it when it was still open. 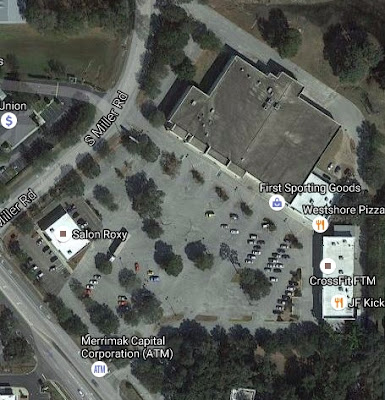 And finally, an aerial image of the building from Google Earth, taken after the store closed.

Thanks Kristin for sending in these photos of the former Valrico Albertsons! However, that isn't all that Kristin sent in. To finish off this post, I will be sharing some photos she took of the very high volume Gandy Plaza Publix in Tampa: 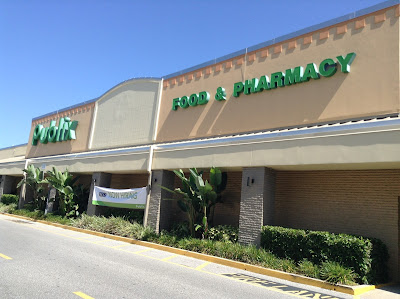 Publix opened this store on Gandy Boulevard in 1985 as a replacement for their older wing store located in Britton Plaza a mile to the north. (Interestingly, Publix's old store in Britton Plaza later became home to Albertsons #4372, and was then sold back to Publix in 2008, and was then rebuilt by Publix in 2015, but that mess is a story for another day). This store is a very busy and high volume Publix. Even though this is an older store, it has gotten very thorough remodels over the years, and will be one of the 4 pilot Publix stores to be getting a Starbucks kiosk in the coming months (and the only non-2010's built Publix that was chosen as a test location). Overall, Publix does a very good job at keeping their older stores looking modern inside and out, and this store is no exception. 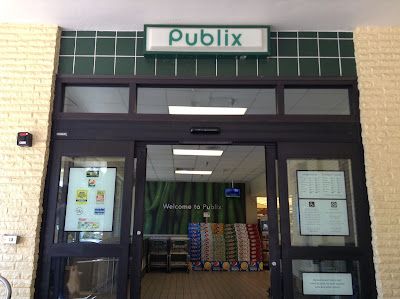 As with most 80's and 90's built Publix stores, the entrances are located facing the sides of the building. So let's head inside... 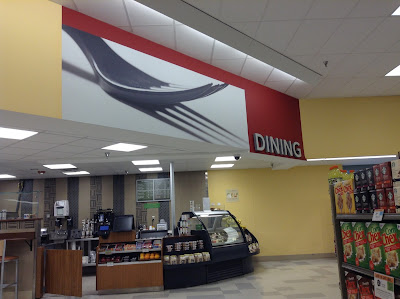 Heading inside and turning right, you find the dining area in the front right corner of the store. In most Publix stores with a dining area, it's usually just a small alcove with some tables in it. However, this store received a "Publix Cafe" as well here. Publix Cafes, from what I've seen, have been limited to newer stores or stores with extra space near the front. They sell coffees and ice cream primarily, and they never look busy to me the few times I've come across them. For the Starbucks kiosk test, my guess is the Publix Cafe will be ripped out, with Starbucks replacing it in this same location. I think the having a Starbucks in here is a much better move than the Publix Cafe, and I have a feeling the pilot program will be successful. 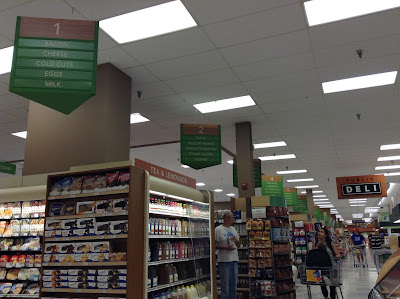 This photo is looking at the grocery aisles from the back right corner of the store. 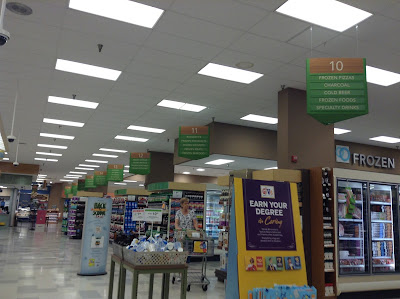 Looking toward the left side of the store from the front main aisle. This store has either 17 or 18 aisles, which is a lot for a typical 80's built Publix. Most 80's Publix stores top out around 14 aisles. 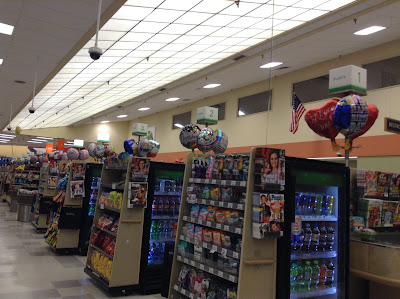 Looking over at the front end, we see the giant angled inlayed light over the registers, one of the most interesting features of these 80's and (more typically) 90's Publix stores. This thing isn't a skylight (which many people assume it is). It really is one giant lighting fixture. 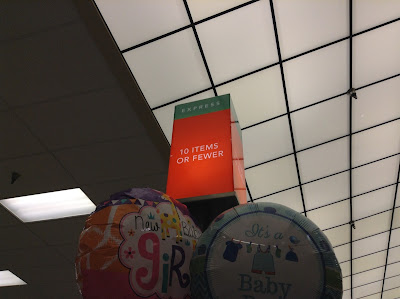 Express lane light, with a closeup of the giant angled inlayed light behind it. 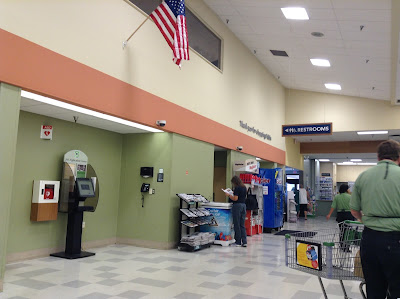 The front wall. The customer service counter is located behind where Kristin took this picture. You can also see one of the windows looking down on the store from the upstairs offices. 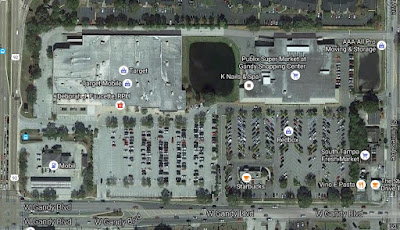 Here's an overview satellite image of Gandy Shopping Center. The shopping center is essentially made up of just the Publix (the building on the right) and a Target (building on the left), along with a few outparcels. 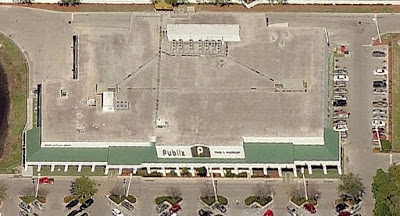 Many times I appreciate the fact that Bing Maps rarely updates their Bird's Eye imagery. Here they captured this Publix back before the most recent remodel where they painted it brownish-orange. This was likely the original look of this store from 1985, and you really can't get much more 80's Publix than this!

Thanks again Kristin for sending in these pictures! As always, if you would like to contribute pictures to AFB, feel free to send them in. They're always welcome!

Next week, we will conclude our tour of the former Sanford Albertsons, so be sure to come back then and check that out!