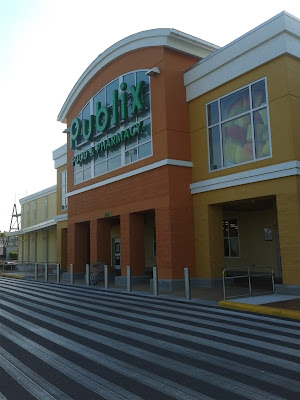 Earlier this month, Publix celebrated the 86th anniversary of their founding. In those 86 years, Publix has grown into a chain of over 1,120 stores with locations in 6 (soon to be 7) states, and has become the nation's 5th largest grocery chain, and the United States' 13th largest retailer overall. Publix has become a powerful force in the grocery world (especially in Florida) over the last 86 years, with no signs of slowing down. However, today I want to focus on something else. Rather than featuring a typical modern (or modern-ish) Publix, like the early 2016 opened store in the photo above, I want to take a trip back to the very beginning - September 6, 1930 to be exact - to take a look at the original Publix located in downtown Winter Haven, FL. While the original Publix hasn't operated as a Publix in nearly 75 years, it's still amazingly well preserved as we'll soon see. So let's begin our tour of how shopping became a pleasure... 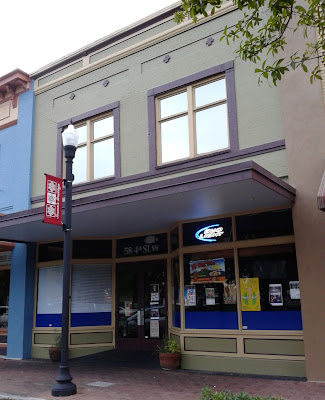 This little storefront you see here in downtown Winter Haven was the home of the first Publix store, which opened on September 6, 1930. Last year for Publix's 85th anniversary, I wrote this post explaining the background of Publix's founding, and Publix founder George Jenkins' motive for breaking away from managing the Piggly Wiggly store located next door to the first Publix. I'll go into a little background history in this post, but today's post will be mostly focused on the building itself. If you'd like a more detailed explanation of the history of Publix, please feel free to read that post I linked to. 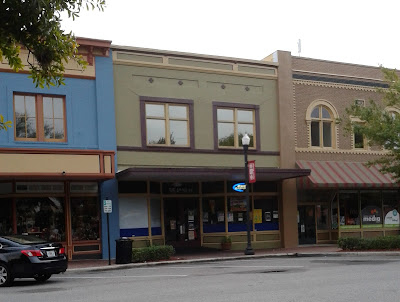 Other than some new paint and a new awning, this building still looks exactly the same as Publix left it when they relocated to their new store down the street in 1940. This building was built in 1916, and has housed many tenants other than the first Publix over the last hundred years. The most recent occupant of the Publix #1 building is a Mexican restaurant called El Norteño, which opened in July 2015. I found this article that talks about the new restaurant opening the the space originally home to the first Publix store. 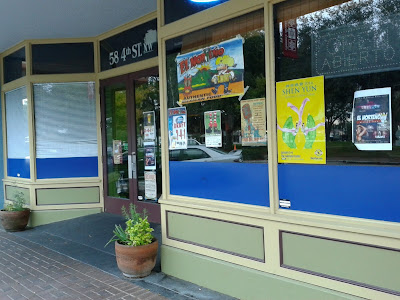 Closeup of the original storefront. All of this is original too. 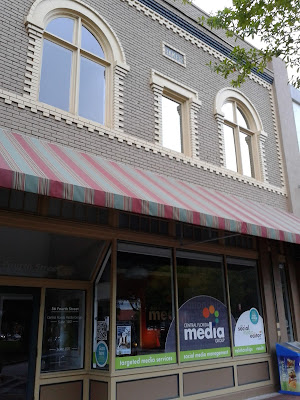 An overview of some of the other buildings on the block. Downtown Winter Haven is very quaint, and very historic (outside of being home to the first Publix as well). If you're ever in the area, I recommend taking a quick drive down the main street, Central Ave., or taking a little walk around. I have a few more photos of downtown Winter Haven coming up shortly, but a few last things about the original Publix:

The photo above shows the original Publix store back when it was a Publix sometime in the 1930's. They've come a long way when you compare this to the photo of the modern Publix at the beginning of this post. All of the little details you saw from the present day photos are also present in the historic photo.

And here's something neat that Publix did for their 75th anniversary back in 2005. The home of their original store was vacant at the time, so Publix decided to decorate it like it would have looked back in the 30's when Publix was still here! This only lasted for that one year to celebrate their 75th anniversary, but it would have been neat if they left the building like this and turned it into a Publix museum (like what Walmart did with their first store). 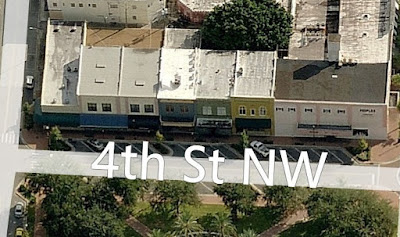 A quick screengrab from Bing Maps showing all of the buildings on the block. 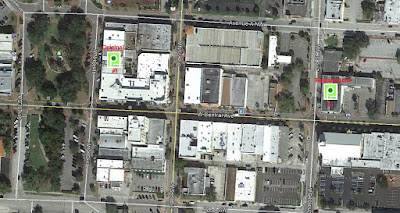 As I mentioned before, Publix relocated from their original location on 4th St. in 1940 to a larger store, which was considered the first "modern Publix Supermarket". Many people consider this next building to the be the original Publix, even though the storefront a few blocks away was technically the first. Let's take a walk over to the 1940 store from the original store, and take in a few of the other sights along Central Avenue in downtown Winter Haven as we make our way to the relocated Publix #1: 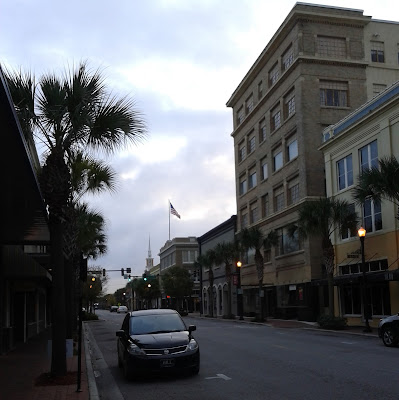 Turning the corner from 4th St and looking east along downtown's main street, Central Avenue. The next few photos are just some random photos of downtown that I took as I made the short walk from the original Publix to its relocation. 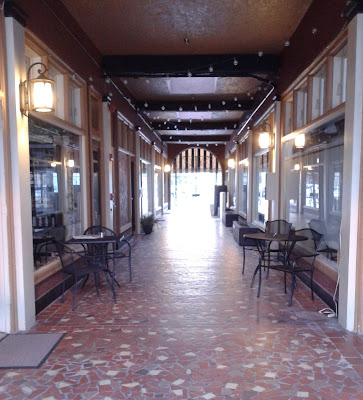 A small breezeway between two restaurants. 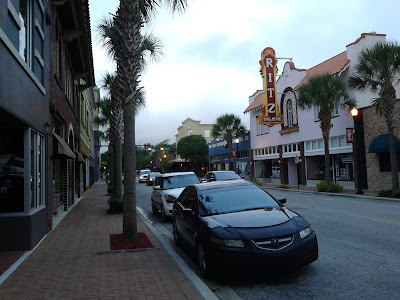 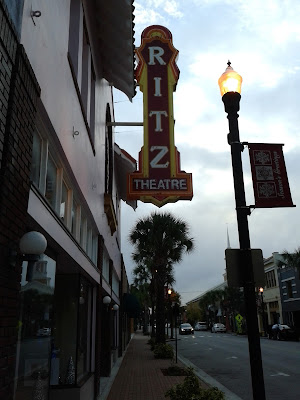 Closeup of the large neon sign hanging over the front entrance of the Ritz Theater. While the sign looks old, it turns out it isn't. I discovered this sign was only installed in 2013. Even though it's new, they did a really good job replicating a historic theater marquee sign to match the historic vibe of downtown Winter Haven. 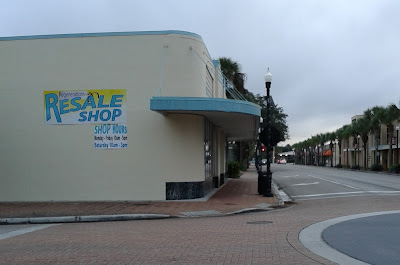 And there it is straight ahead - the second location of the original Publix.

This building is where the original Publix moved to after establishing itself as a successful grocery store. This new store was considered George Jenkin's "dream store" and a "food palace", and included such features as "piped-in music, air conditioning, cold cases for frozen and refrigerated items, in-store donut and flower shops, and electric-eye automatic doors." Here's a photo of what this store looked like back in the 1940's. Other than having the top of the center glass block panel chopped off, this building is also very well preserved, and is still very recognizable as a former Publix. This store was the first of Publix's Art Deco store prototype to be built. These art deco style store were primarily located in downtown areas, as the era of the surburban shopping center had yet to take off when this model was introduced in the early 1940's. When suburban shopping centers began to become more commonplace in the mid to late 50's, Publix stopped building these tiny art deco stores and switched to their most famous design of all time: The Publix Wing Store. Many of these tiny art deco style Publix stores still exist, and are very well preserved. For example, here's a creative reuse of one of these art deco style Publix stores in St. Petersburg. 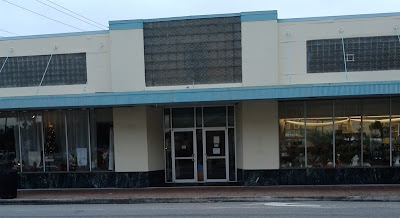 Currently, the 1940 Publix is home to St. Matthew Regenerations Thrift Store. From what I can tell, this thrift store has been here a really long time. 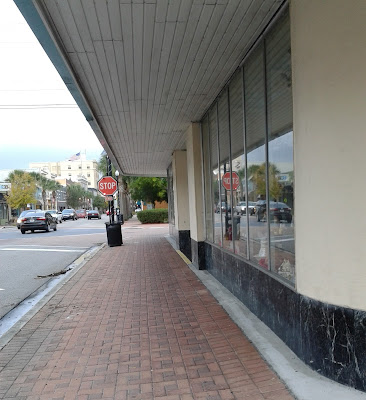 The windows and the marble trim are all original to Publix. The marble trim under the windows was a design feature Publix used in their stores all the way through the late 70's. 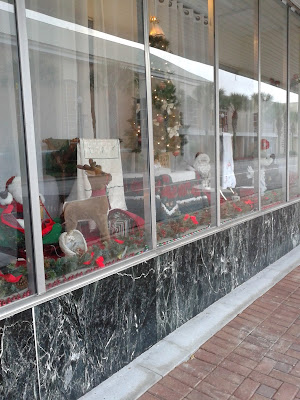 Another view of the windows. As you can tell, I visited this store around Christmas time. 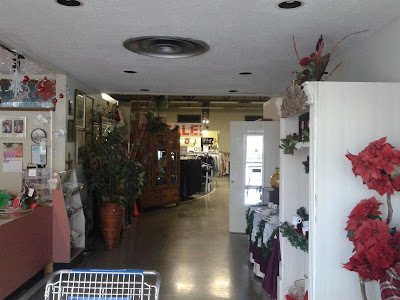 Looking in through the front door for a peek at what the interior currently looks like. The thrift store wasn't open for the day yet, so this is all we'll be able to see of the interior. The ceiling in this front part of the building looks like something out of 1940, but it looks like much of the rest of the building has been gutted or modified over time. In the very back it looks like there is an exposed ceiling, which is not original. The first ten photos you can click on at this link (other than the one of the parade) show what this store looked like in the 40's, including interior pictures from right before the grand opening! It's pretty neat seeing what this store looked like inside back in 1940, and I highly recommend clicking though those photos. 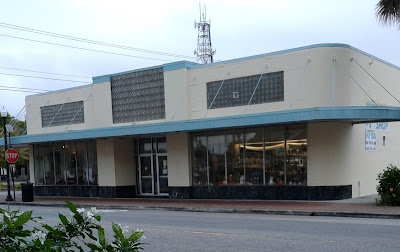 And a final parting photo from the 1940 Publix. 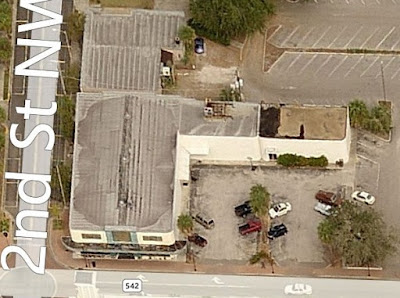 And here's a quick Bird's Eye aerial image of the building. The skinny addition coming off from the right side of the main building was added on after Publix left I believe. The buildings behind the old Publix aren't a part of the old Publix.

So that's pretty much it from the original Publix stores. I really don't know when the 1940 store closed, but I believe it was replaced by either the Northgate Plaza store on 6th Street, or Southeast Plaza store on Cypress Gardens Boulevard. Both of those stores date back to the Wing Store era, although both were later rebuilt in the 2000's. However, if you'd like to see some additional historic Publix photos, this article has a bunch from different Publix stores all over the state, including a few from the two original Winter Haven stores I just covered.

UPDATE 9/28/2016: Commentor duckman66 shared a link to a very interesting publication from the Lakeland Ledger published in 1980 to commemorate the Publix's 50th anniversary. It's a fascinating read about Publix's first 50 years in business, and I highly suggest reading it (it's a bit long however, so plan a little time if you want to read the entire thing). Here's the link: http://bit.ly/2d3WXUY 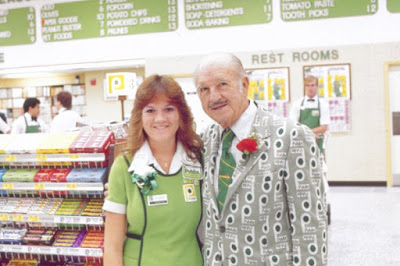 To officially conclude this post, I decided to include this picture of the man who started it all, George "Mr. George" Jenkins, looking snazzy in that custom made Publix suit jacket. This photo was sent in a while ago by flickr user Otis "Joe" Smith, and I believe it dates back to the 80's. George Jenkins was very active with Publix all the way until his death in 1996 at the age of 88, and was very well liked by his employees. Even after becoming wheelchair bound due to a stroke in 1989, he still continued to work for the company and visit stores. To this day his legacy lives on as Publix continues to grow into new markets and continues to grow stronger. Still to this day, Publix places a photo of Mr. George in every one of their stores (usually behind the customer service counter), showing that they will continue to uphold the beliefs their founder laid out for them 86 years ago.