It's Been Their Pleasure for 85 Years - Happy 85th Publix! 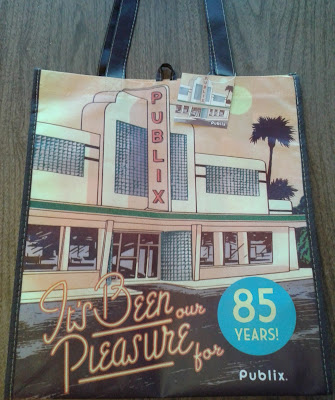 On this day 85 years ago, George Jenkins opened the first Publix store opened at 58 4th St. SW in downtown Winter Haven, FL. George Jenkins was a man who held various odd jobs in his younger days before finding his place in the supermarket world. Before Publix, George Jenkins found himself working at various Piggly Wiggly stores in West and Central Florida as a manager in the late 20's. After many of the unfortunate events in Florida and the US in the late 20's (the Florida Real estate bubble of 1925, direct hits by two hurricanes, and the stock market crash of 1929), the owner of the Piggly Wiggly stores in Florida was forced to sell his stores to a new owner. After the new owner purchased the Florida stores, he decided he didn't want to make the trip to Florida to visit his new acquisitions. When George Jenkins heard this, he decided he should make a trip to the new owner's office in Atlanta to introduce himself and discuss what the future would hold for the Piggly Wiggly stores in Florida. When George Jenkins arrived in Atlanta, he arrived at the new owner's office and asked his secretary if he could speak with him. His secretary replied that the new owner was in an important business meeting at the moment. However, George Jenkins could overhear in the other room that the new owner was on the phone with someone, discussing his recent golf game. This absolutely enraged George Jenkins. He returned to Florida and decided to quit his job as manager of the Piggly Wiggly after the incident in Atlanta, and decided he would open his own grocery store right next door to the Winter Haven Piggly Wiggly he formerly worked at. Jenkin's new store, named Publix after an old movie theater chain on the brink of failure named Paramount-Publix (Jenkins once said he chose that name because he liked the sound of it), opened on September 6, 1930. Jenkins declared war on the neighboring Piggly Wiggly with various rival sales and one-upsmanships. After a year or so of battling, the Piggly Wiggly conceded and closed up shop, while Publix continued to prosper, relocating to a new state-of-the-art store in 1940, dubbed a "food palace" by George Jenkins. That new store would have looked just like the drawing on the bag in the photo above, called the "Art Deco" style Publix. Publix continued to open stores of this style into the 1950's all across Florida, until their famous wing stores made their debut later that decade. And Publix is still growing today. Publix currently has 1,103 stores in 6 states (Florida, Georgia, Alabama, South Carolina, Tennessee, and North Carolina), and supposedly Mississippi is somewhere on the horizon, although nothing official has been announced yet. Of Publix's 1,103 stores, 760 of them are located in Florida alone, where Publix enjoy's a nearly 50% market share and title of #1 supermarket chain, that is, after chasing off or nearly killing practically every other mid-range supermarket competitor in the state over the last two decades. Who would have thought that a supermarket founded out of spite and named after a dying movie theater could have turned into such a success? Publix has become a Florida icon, and they'll probably be around for another 85 years since they have yet to find rival who could really challenge them in their home state.