The current state of the exterior of this former Albertsons looks rather weird at first sight. Three quarters of this store's current exterior is renovated beyond recognition, yet the other quarter looks the same from the day Albertsons first opened here in June 1996. Albertsons opened this store on the site of a former Kroger owned SupeRx Food and Drug store, which was torn down for the new Albertsons. The SupeRx opened here in 1982, and closed in 1987 when they moved down the road a little to a new Florida Choice store in a former A&P Family Mart in the Melbourne Village Plaza. Florida Choice was the new name Kroger gave to their Florida SupeRx grocery stores as a way to salvage their Florida division, which would ultimately fail when Kroger pulled out of Florida in 1988. To read more about Kroger in Florida, click here.

Anyway, back to Albertsons. This store was a Pre-Plaza Model Albertsons, and one of the last ones built before the Pre-Plaza stores started to morph into the Plaza Model stores. I'm pretty sure this store had the Blue & Gray interior for its entire 14 year run. This Albertsons had the honor of being the last Brevard County Albertsons to close, making it all the way to February 2010. All the other Brevard County stores closed by 2006 or earlier.

This store sat abandoned for three years until LA Fitness announced they were opening a new location in three quarters of this former Albertsons store in late 2013. What I found strange was the extensiveness of LA Fitness's remodel to this store. LA Fitness has two other locations in former Florida Albertsons stores, stores #4384 in Lake Worth and #4415 in Ocoee. Both of these locations still retain their Albertsons look on the exterior after LA Fitness moved in, while this store got their extensive remodel for some reason. At least LA Fitness didn't remove every piece of this store's previous life. A small sliver of the main store and the former liquor store got to keep their original Albertsons facade. This part of the store became a second location for Palm Bay based Thrifty Specialty Produce in Summer 2014, who broke through the wall to combine the liquor store and part of the main store into one space. The photo above was taken during my first venture to this former Albertsons, before Thrifty opened. I didn't take many pictures during that visit because I wanted to come back after Thrifty opened to see what they did with the interior, which you can see in the photos below.

A similar shot to the one above, taken after Thrifty Specialty Produce opened, and of slightly lower quality due to the lighting. 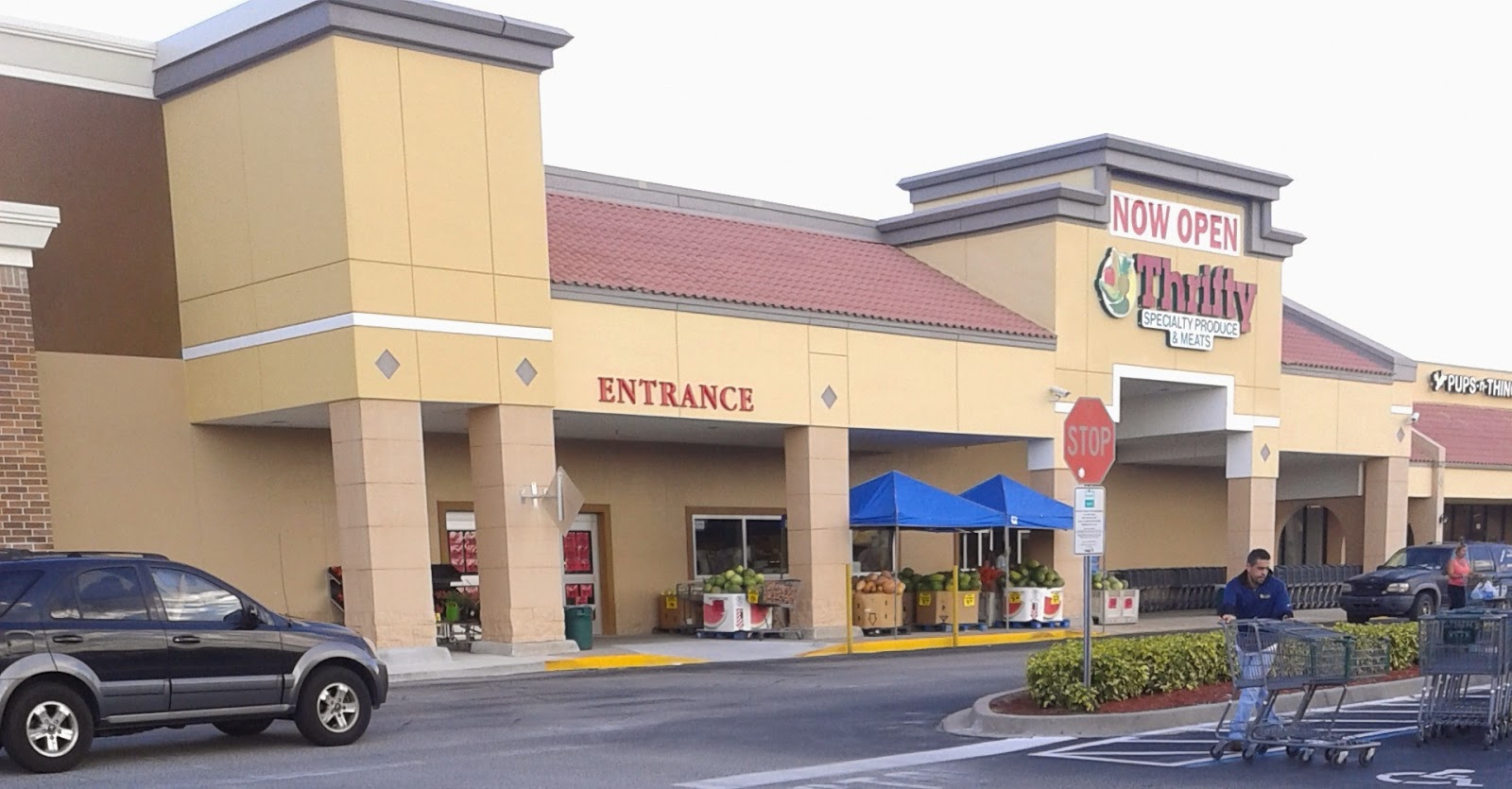 And the exterior of Thrifty Specialty Produce after they opened. 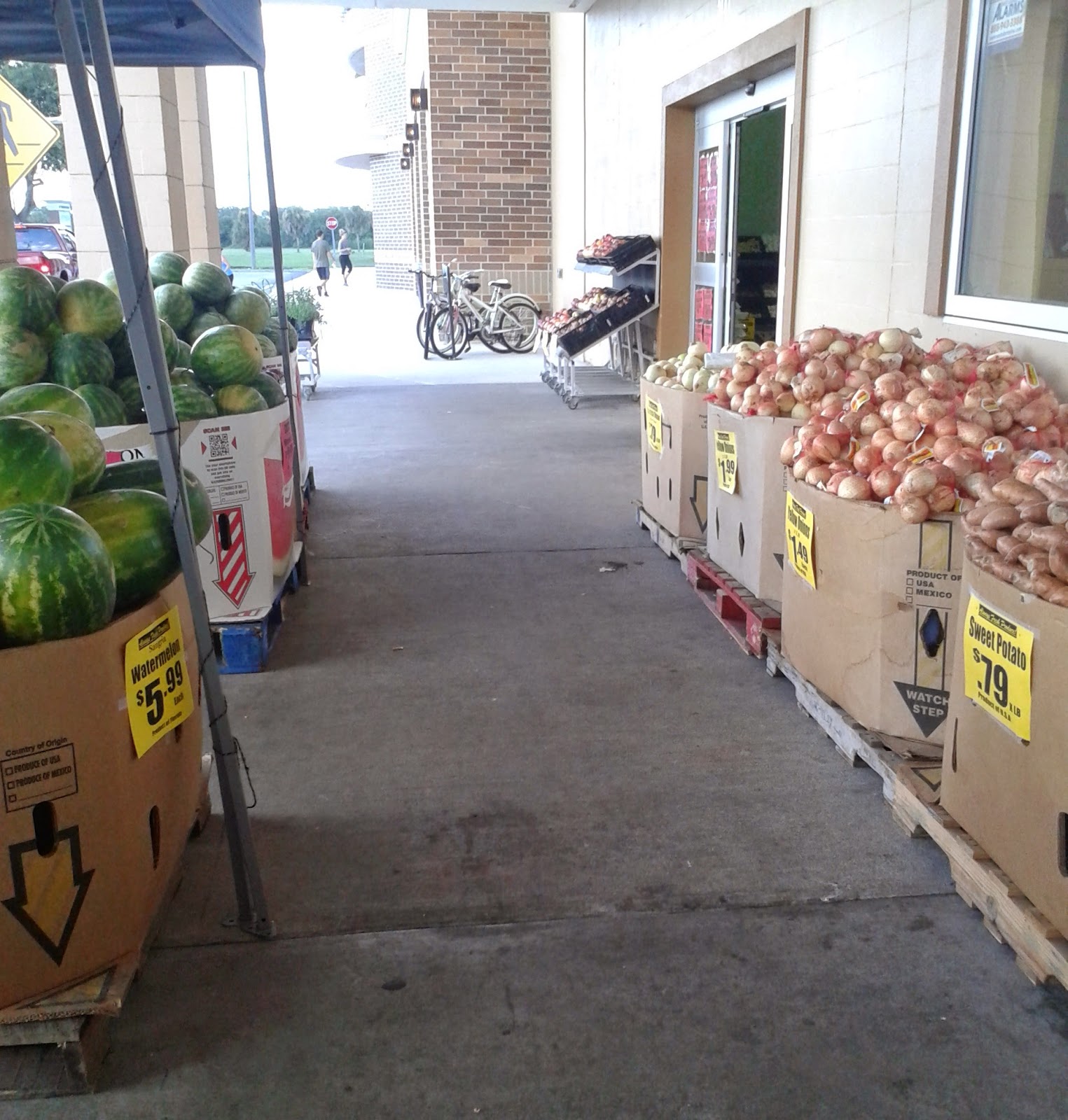 Under the original Albertsons canopy looking toward LA Fitness and Thrifty's new entrance. They were able to cram a lot of produce under this canopy. 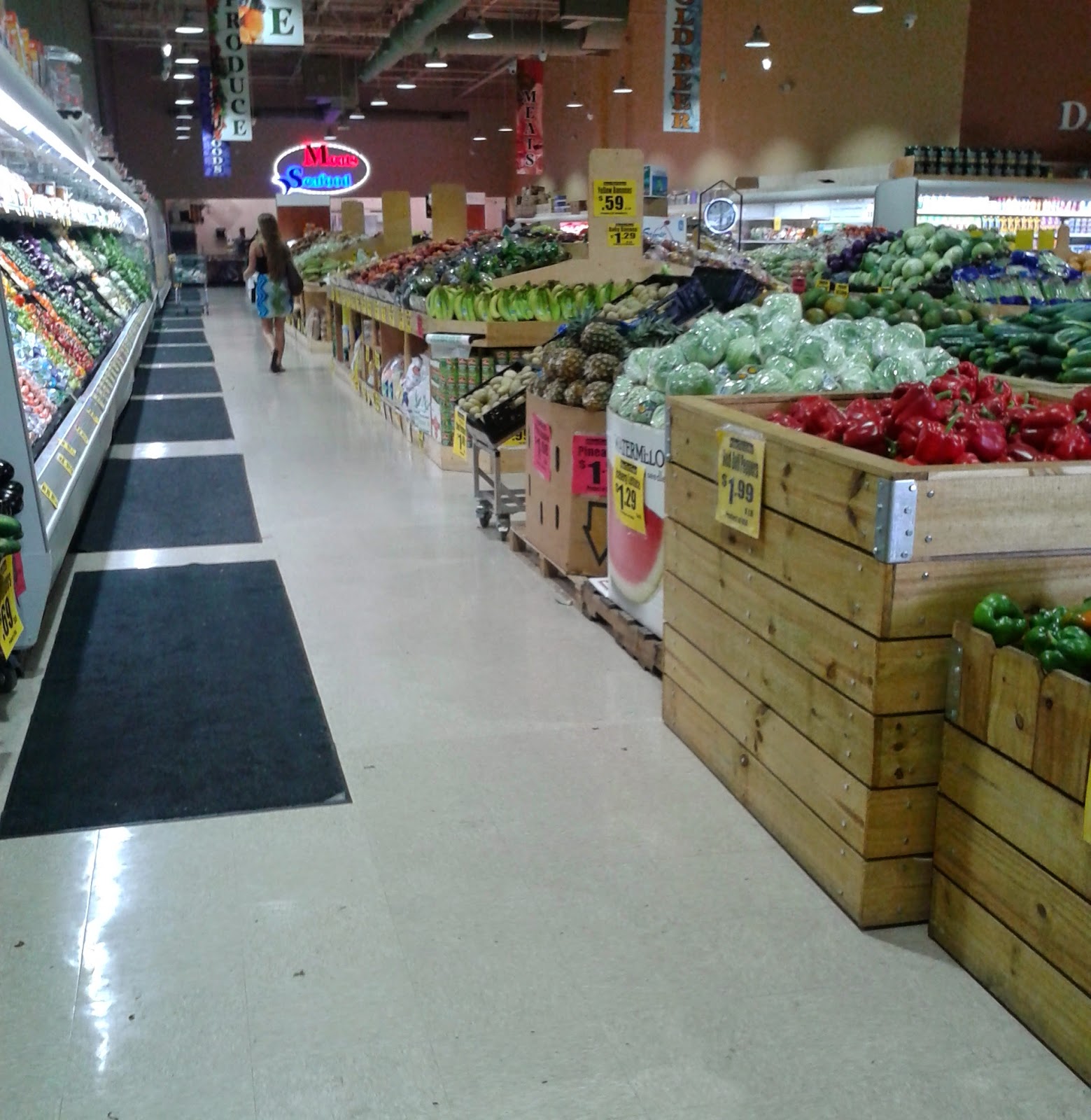 After heading in Thrifty's entrance, this is the sight that greets you. For an independent market, Thrifty did quite the extensive remodel of this place. What they did looks nice, however I thought they were going to leave more of the Albertsons in tact. I couldn't find anything original in here, however I still took some photos for a quick look around. This Albertsons would have had a similar layout to the Palm Bay store covered here back in May. Also like the Palm Bay store's post-Albertsons remodel, the original Albertsons drop ceiling was removed in favor of the warehouse style ceiling. 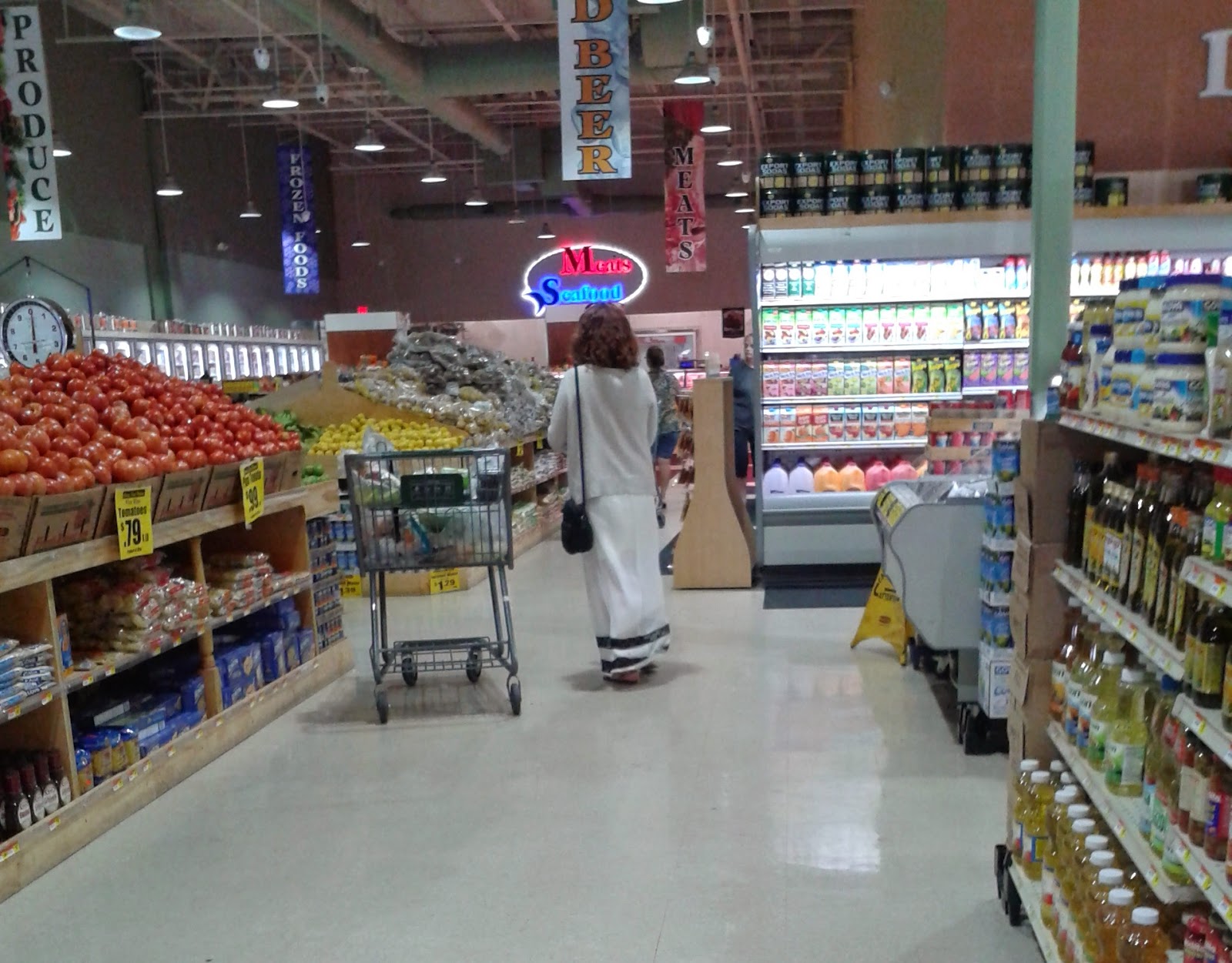 I'm standing right where the wall used to be that separated the liquor store from the main store. You can see the transition in this photo between the two parts. Originally, the part of the main store that Thrifty currently occupies would have been Albertsons' Bakery and Produce Departments.

Also, just to note, this place was pretty busy when I visited, so it was hard for me to get photos completely free of people. 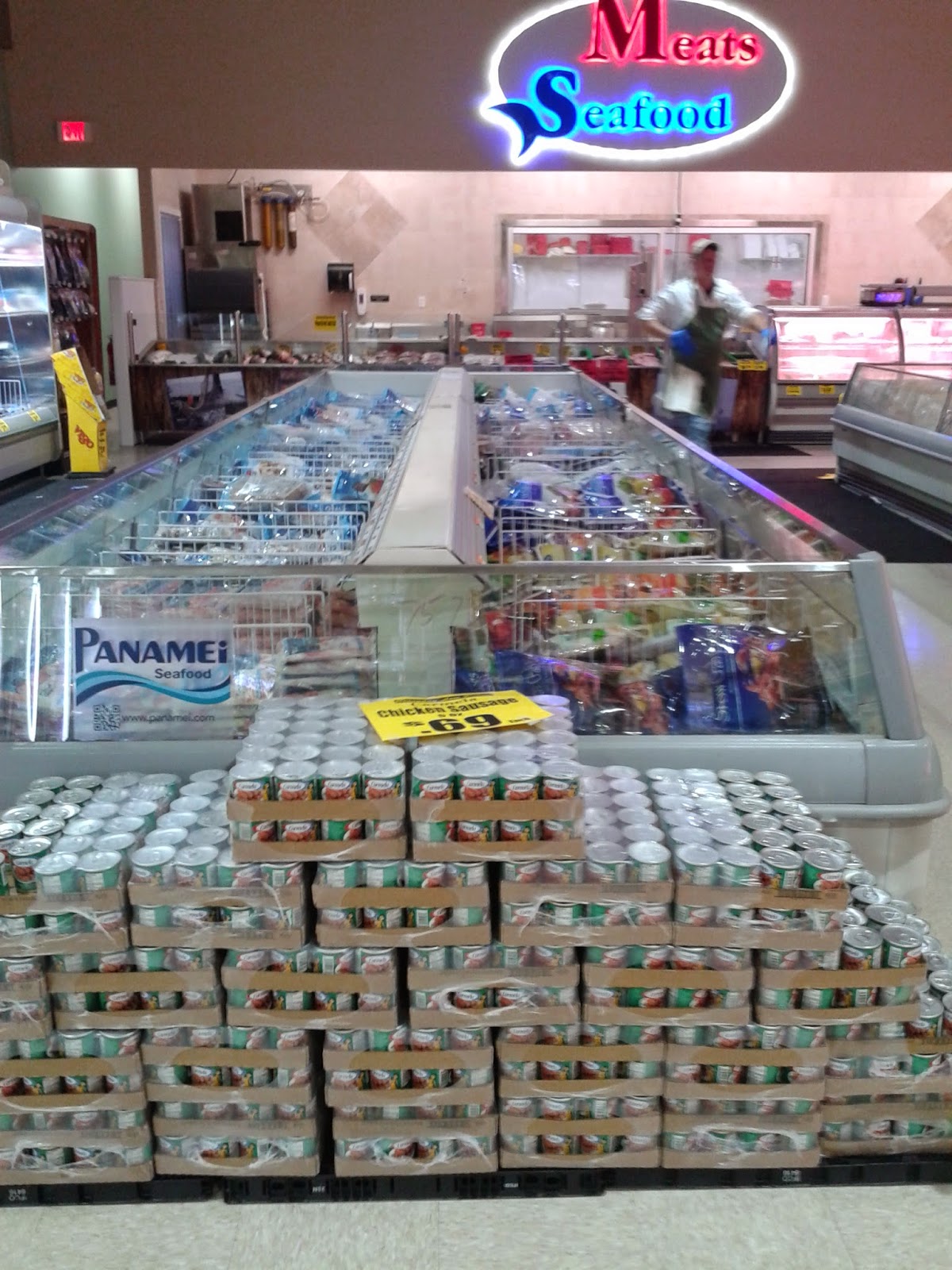 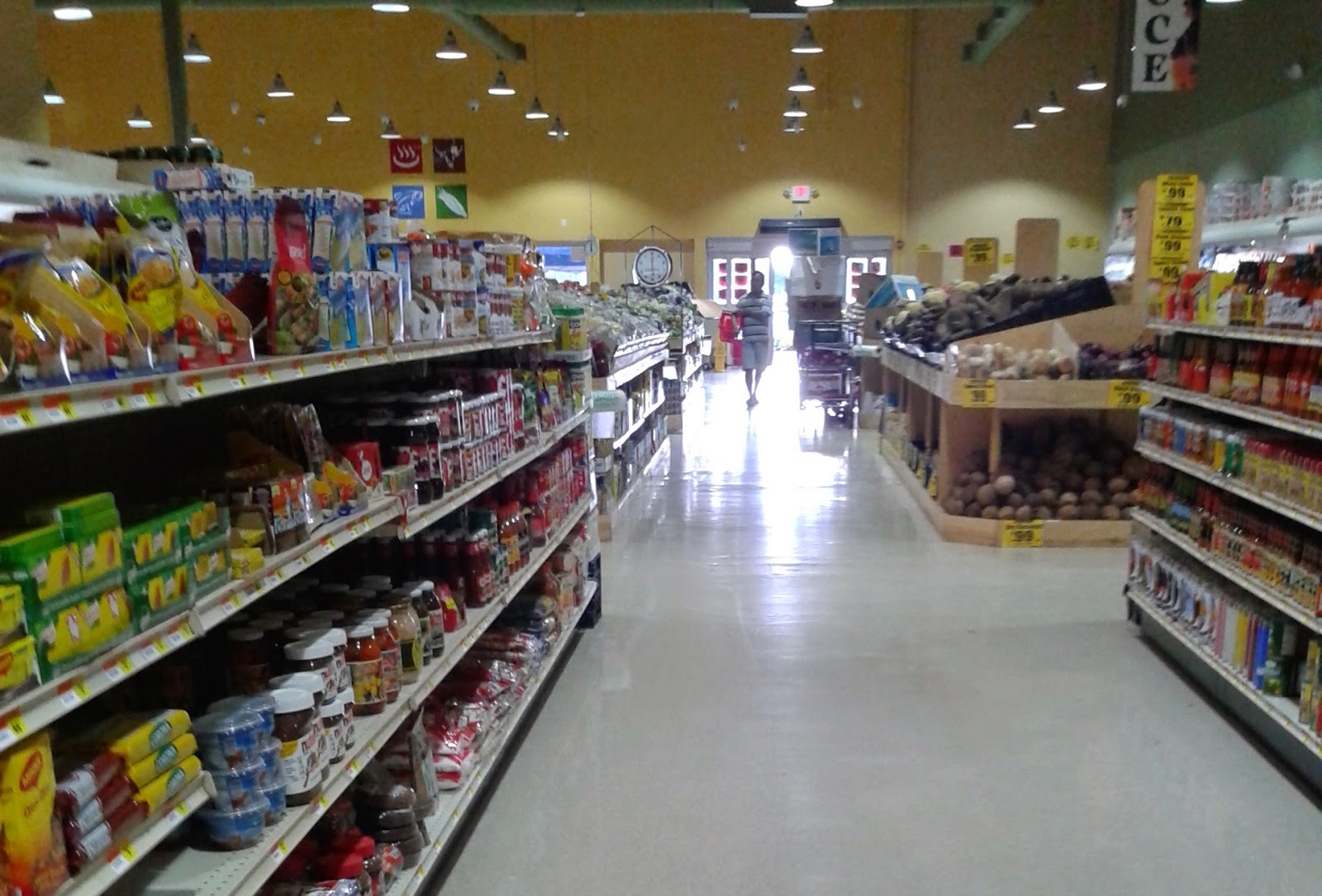 Looking toward the front of the store from the Meats and Seafood Department. 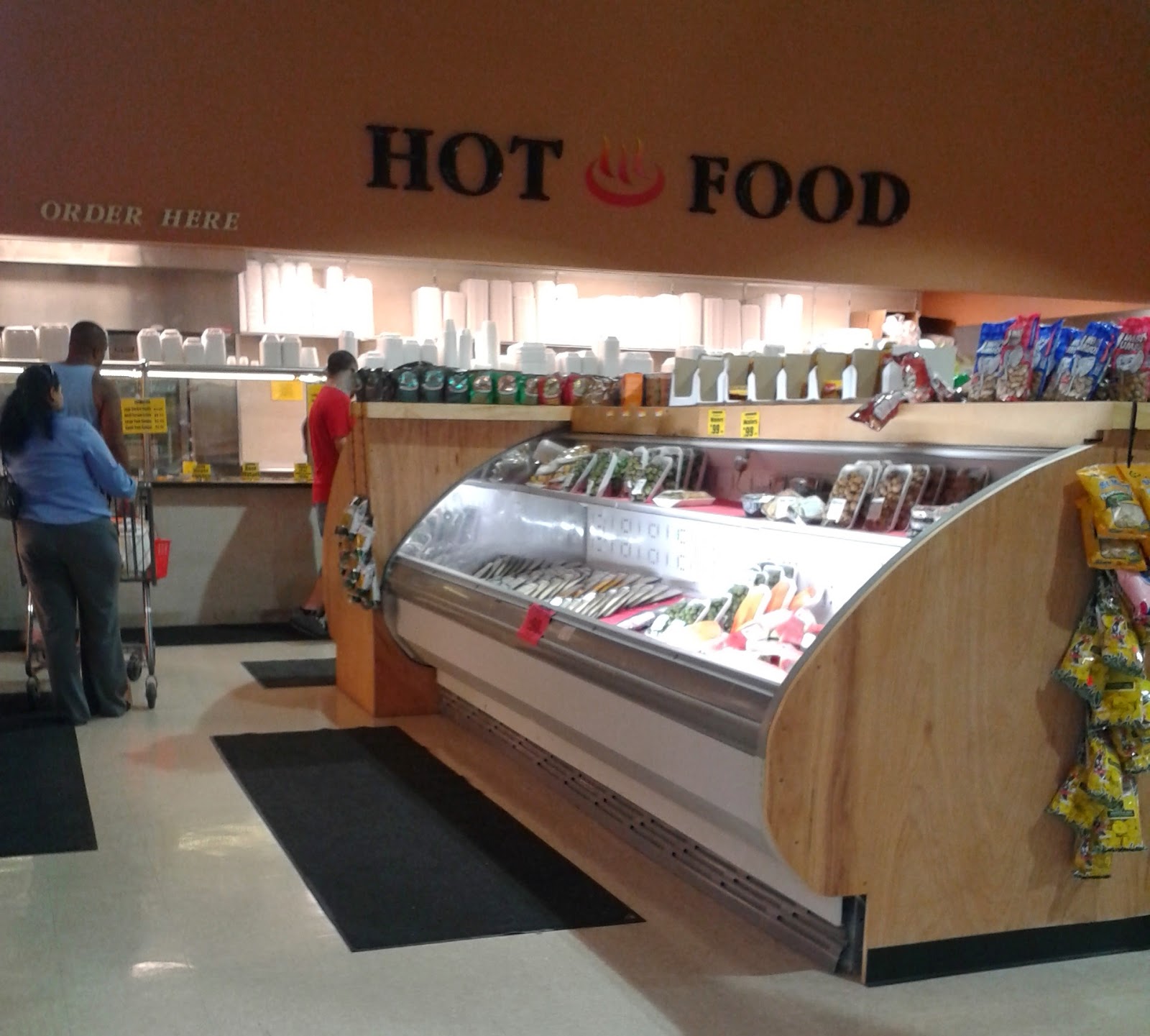 The Hot Food counter is located along the right side wall of the former liquor store, along with a small Bakery and the Customer Service counter, which are off the the right of here. 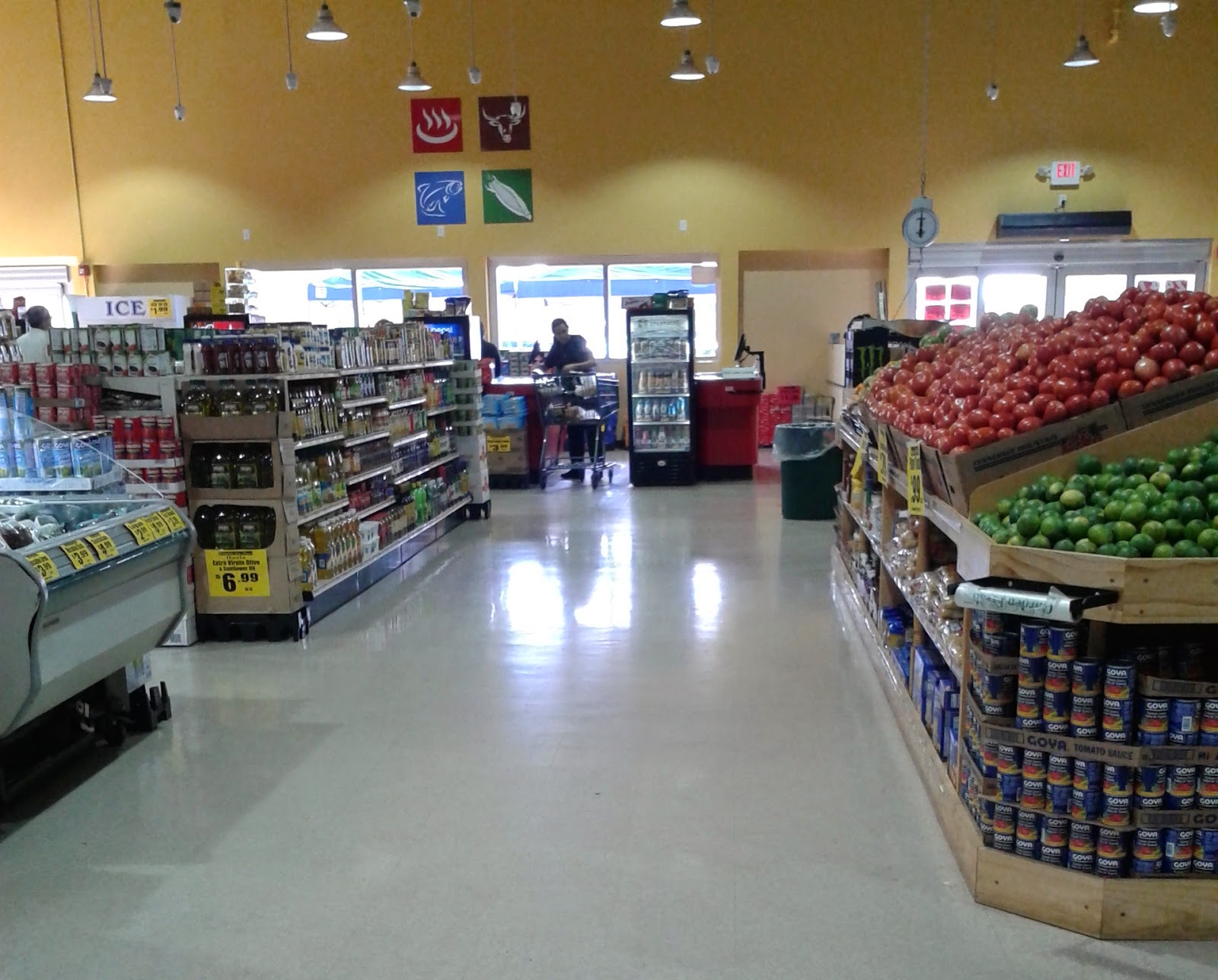 The front of the main Albertsons store portion. 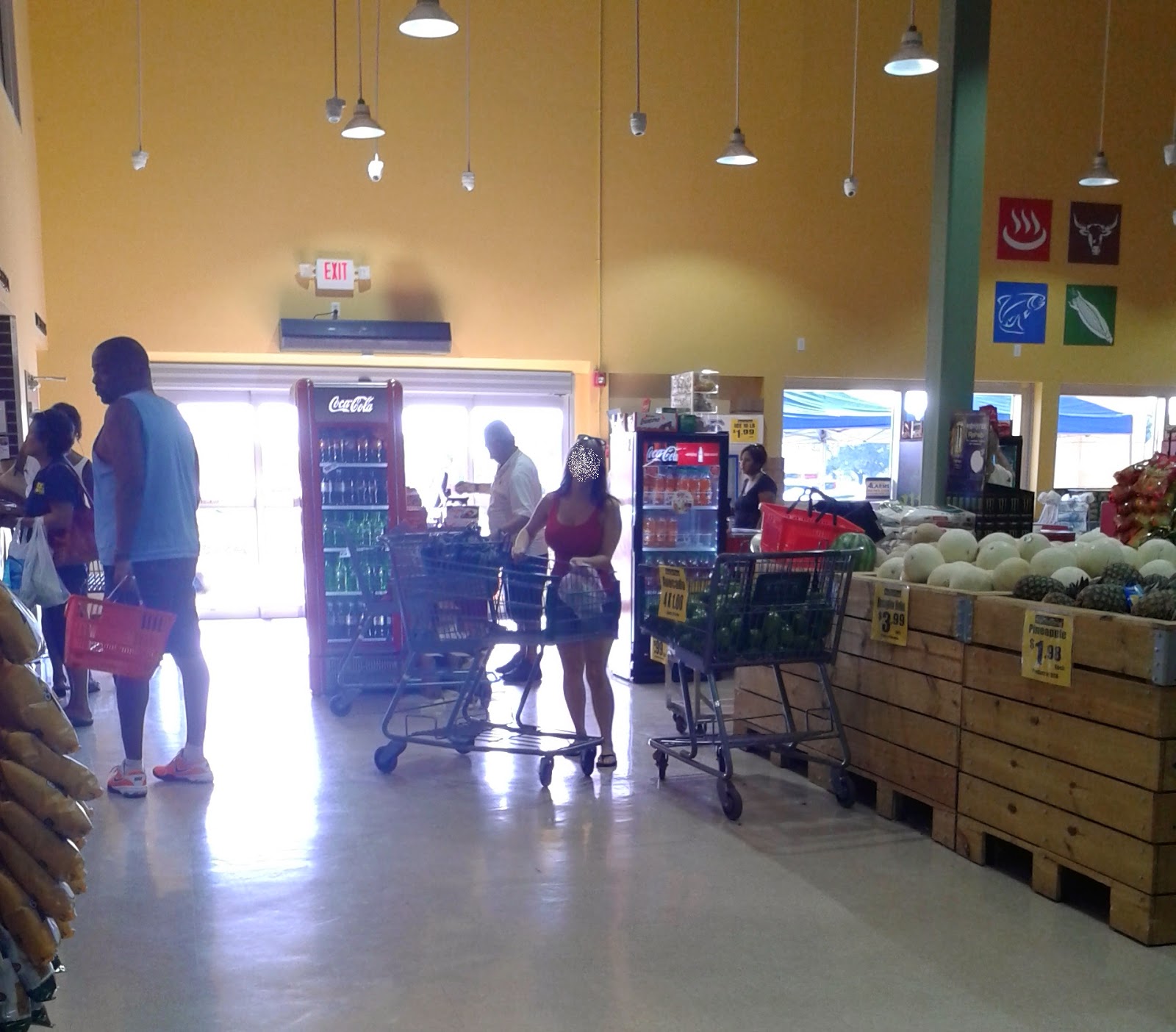 That completes our look of the interior. Time to head back out...

One final look at the last little piece of Albertsons exterior that remains. This is another pre-Thrifty photo. 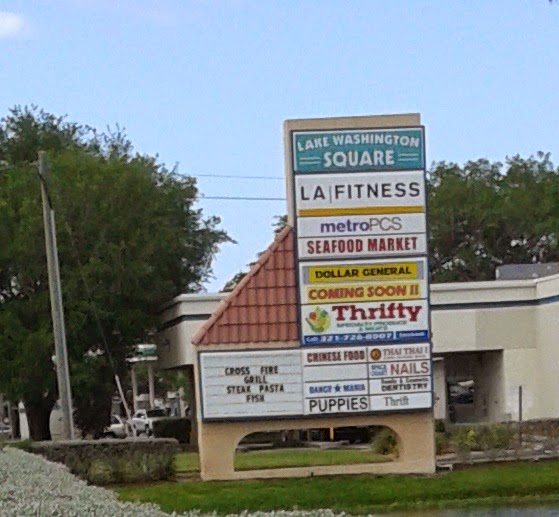 This is the original Lake Washington Square road sign from when Albertsons was still in operation. After Thrifty opened, a new road sign was installed, which you can see below in the next photo. 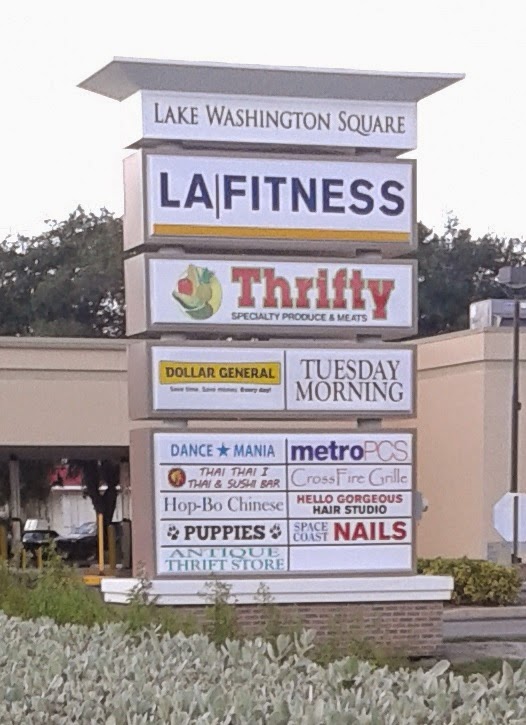 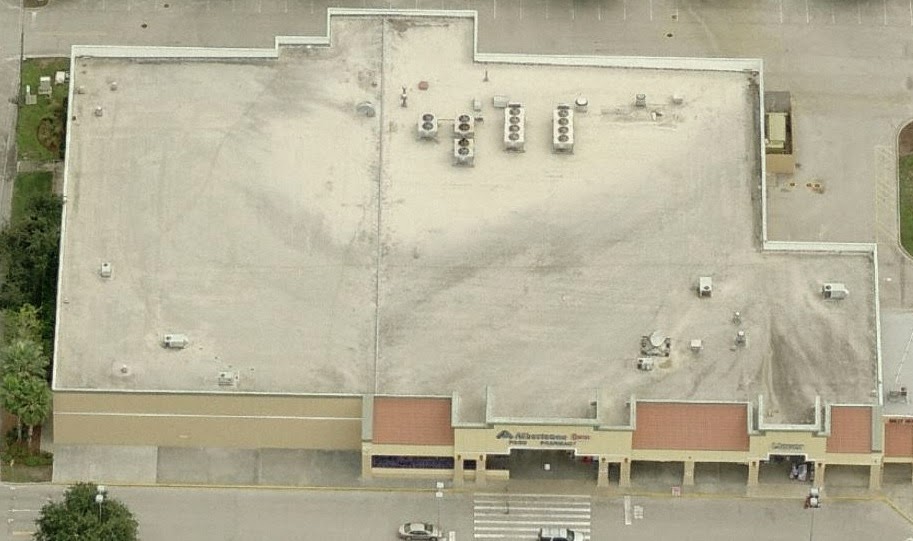 Front - Albertsons is still in business in these images! 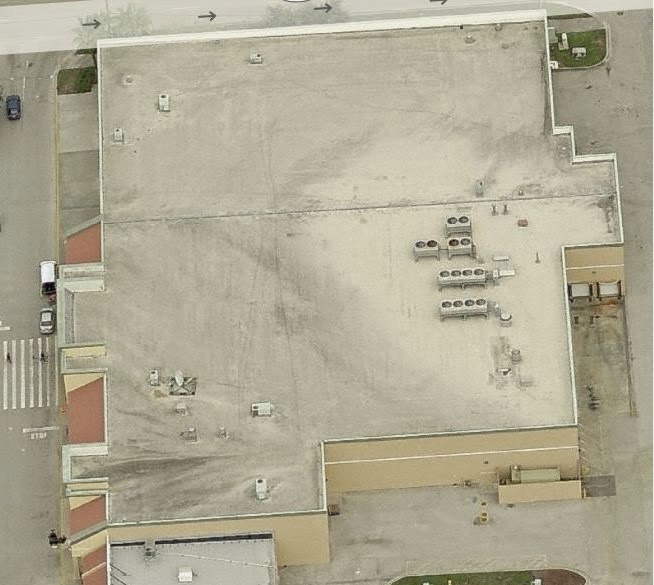 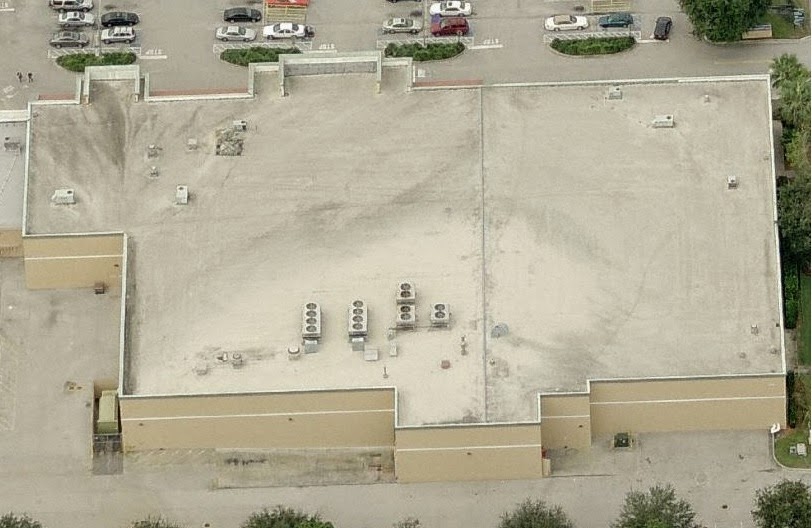 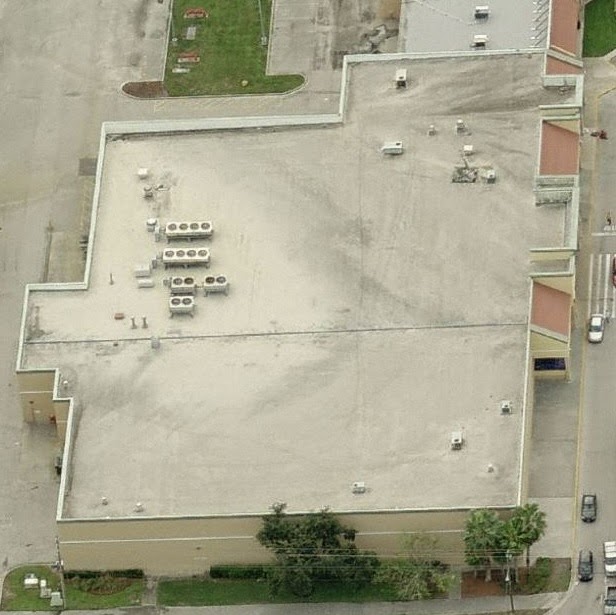 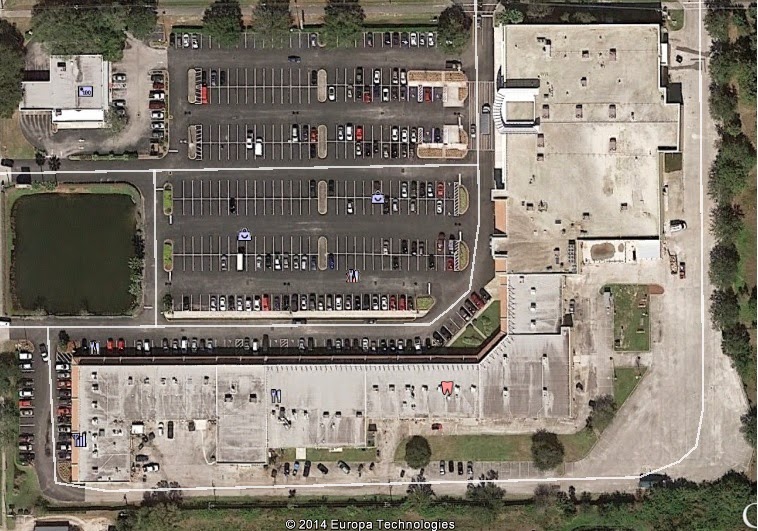 Former Albertsons #4429 - 2014 - This was after LA Fitness's renovations were complete. 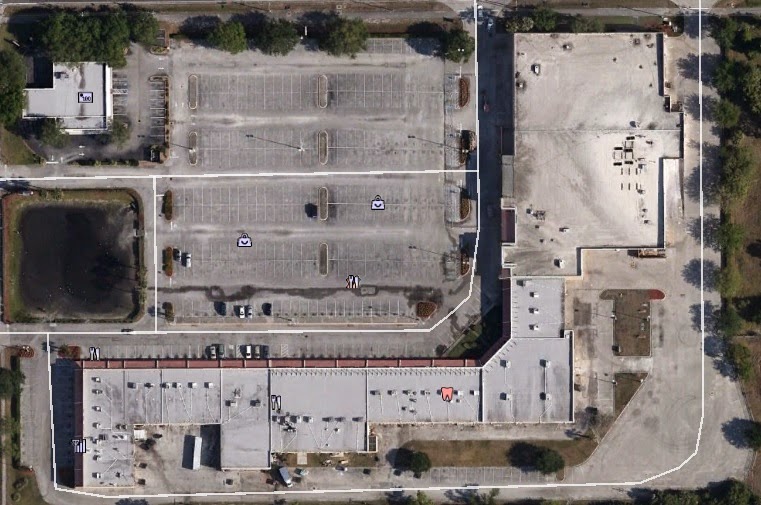 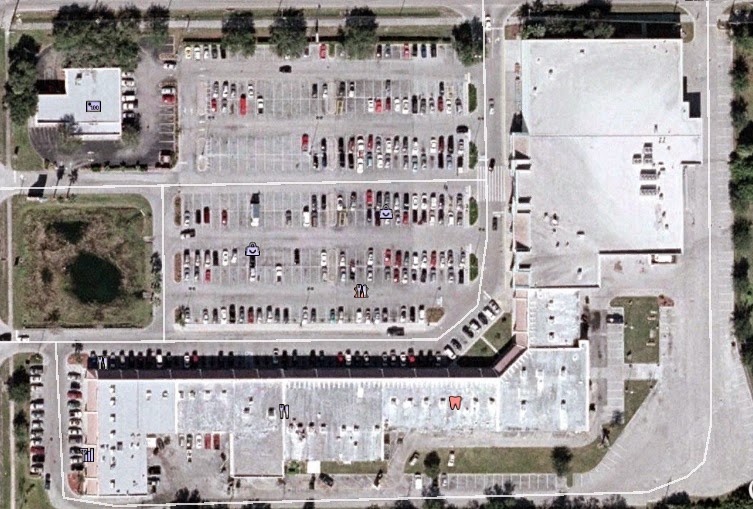 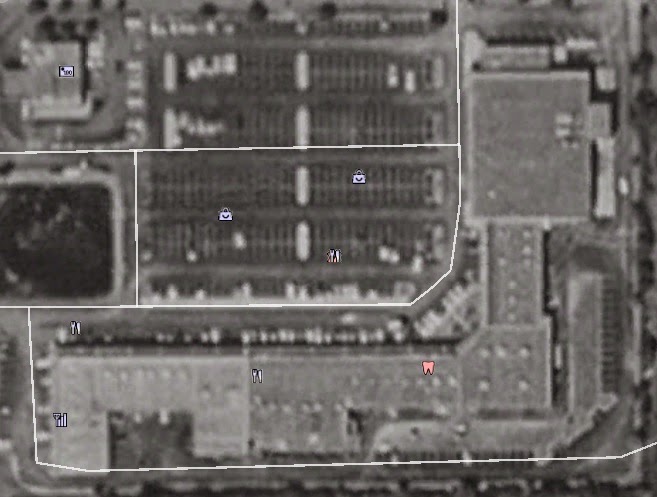 Future Albertsons #4429 - 1994 - The abandoned SupeRx building is still standing where the Albertsons will eventually be built.

I just had to finish out this post with an online photo of this store from back in its glory days as Albertsons. This was a really nice Pre-Plaza store back in the day. Now all that's left of it is a shell and about 100 feet of canopy.

That about wraps up this post. There's going to be a second Albertsons post going up this month on Sept. 20th, so be sure to check that out.

Hope to see you then,