Albertsons #4474
12031 Southern Boulevard, Loxahatchee, FL
Happy Easter everyone! Today's post is rather short compared to most others, mostly because of what this former Albertsons store was converted into after it closed, leaving me little wiggle room to go overboard on pictures like I normally tend to do. Because of that, today's post is a compilation of old photos from the internet I saved a long time ago, Google Streetview images, satellite images, and a handful of photos I took while in the area. Former Albertsons #4474 needed some kind of documentation, so this is what I was able to put together for this rather short-lived store in the outskirts of urbanized Palm Beach County:
Albertsons opened its Loxahatchee store in early 2001, during a time when development in western Palm Beach County was booming (and even to this day, that development boom continues as there is still lots of land primed for development out this way). Numerous chain stores were flooding the Loxahatchee/Royal Palm Beach area in the early 2000's, with Southern Boulevard, the main road through the area, becoming the area's retail hub. The Loxahatchee Albertsons opened as the anchor to a new retail development called "Village Center Shops", which included the Albertsons and some outparcels upon which a 7-Eleven, Walgreens, Wendy's, and a small strip of storefronts were built. Even though Albertsons would only last 9 years in this location, this store must have done some moderately good business, as it lasted until Albertsons completely pulled out of Palm Beach County in 2010. 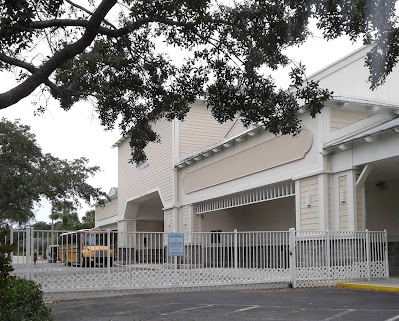 In 2011, shortly after Albertsons closed, permits were filed to begin the process of converting the former 61,000 square foot grocery store building into a charter school. Palms West Charter School, as it would later be called, finished remodeling this building in time for the 2013-2014 school year. While the charter school's remodel left most of Albertsons' original old-Florida style exterior completely in-tact, the interior was gutted and rebuilt to look just like any average school.
Since the building is now a K-8 charter school, it's surrounded by a bunch of fences and extremely difficult to photograph, which is why I've had to pull some images from Google Streetview to supplement the few crummy images I managed to take while circling the parking lot. While taking pictures of supermarkets, abandoned buildings, and related places doesn't bother me, taking pictures of schools isn't something I'm particularly fond of. I feel if someone catches me taking pictures of a school, it will lead to many more questions than if someone sees me taking pictures in a grocery store. What's even worse, actually, is I had an encounter with a grouchy Winn-Dixie manager about taking pictures immediately before visiting this former Albertsons, which really didn't help my mood any!

Another thing that didn't help with taking pictures of this building was that most of the parking lot was converted into a playground and basketball court, right in front of the main part of the building too. Only a small portion of Albertsons' parking lot was preserved over by the old liquor store, now used for staff parking. 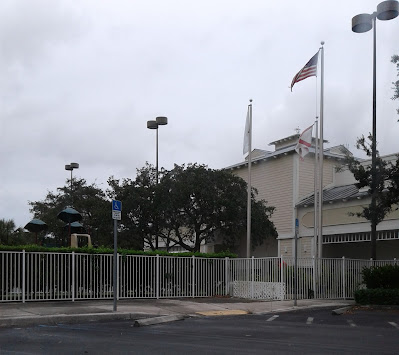 Somewhere behind that fence and those trees are remnants of a Grocery Palace-era Albertsons store. I timed my trip out this way to happen on a Sunday morning, hoping the school would be quiet as it was a weekend. I was actually proven wrong, as there was a school bus parked out front and a bunch of people in the playground/basketball court area in front of the building. 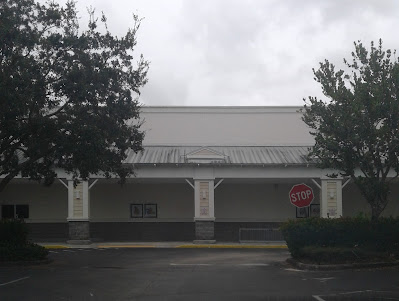 It's been a pretty common thing to see schools (especially these K-8 charter schools) opening in abandoned retail buildings throughout Florida. I've seen everything from old supermarkets to old Kmarts and Targets get converted into schools, sometimes in the middle of a busy shopping center too (which is a rather odd sight - the conversions of stand-alone buildings like this one seem a little more natural). 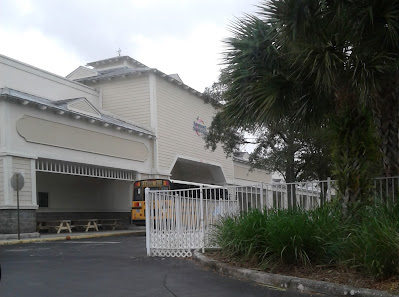 Here's one last look toward Albertsons' former main entryway, which is now a side entrance into the school and the main access from the building to the playground and drop-off area. All the detailing on the front of the building is original to Albertsons, and so is the paint scheme - all the school did was repaint the metal roof from blue to beige after the conversion.
At the right side of the building is the former liquor store, which was turned into the school's front office and guest entrance, as this door opens into the parking lot. 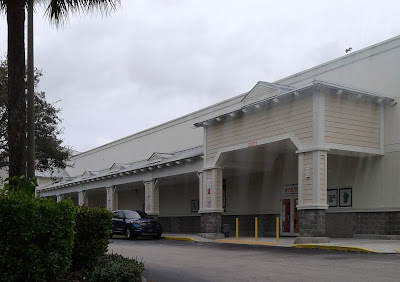 Here's my photo of the old liquor store, a little glared from being taking through the car window.
Lastly, before moving on to the aerial images, here's my attempt at getting a view of the entire front of the building on Google Streetview. With the ground coverage out of the way, let's move on to some Bird's Eye aerial images, courtesy of Bing Maps: 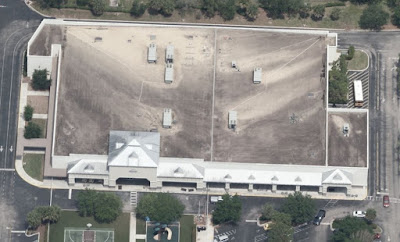 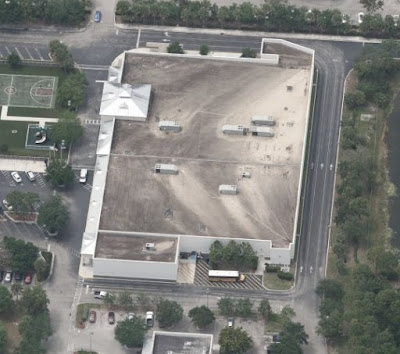 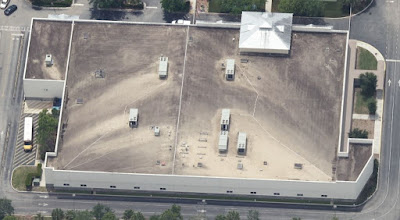 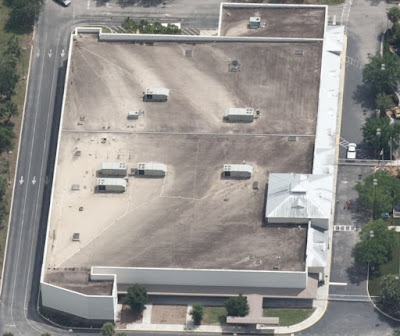 Left Side - Due to the layout of the lot, Albertsons' receiving bays were on this side of the building, where the back corner sticks out. The school closed in the bay doors and turned the area into more green space.
And now for some historic satellite images, courtesy of Google Earth: 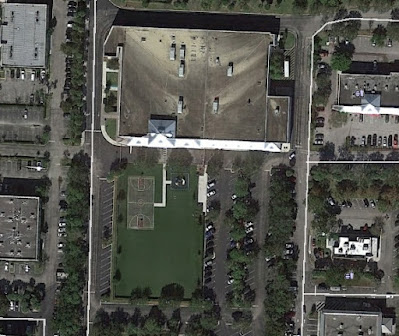 Former Albertsons #4474 - 2019 - Here you can see how most of the parking lot was turned into a playground. 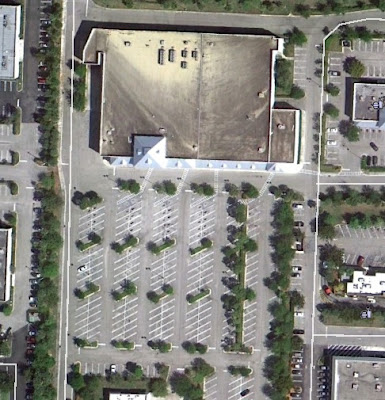 Former Albertsons #4474 - 2011 - The abandoned building before its transition into a school began. 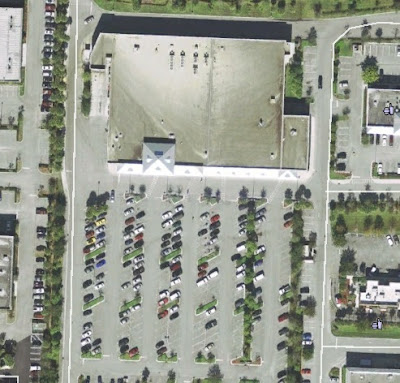 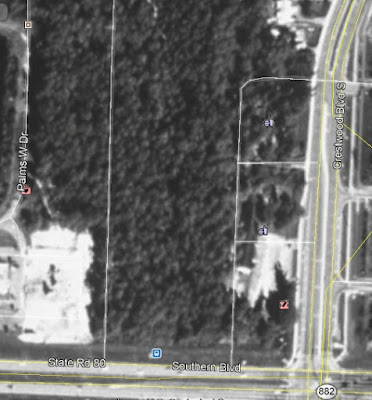