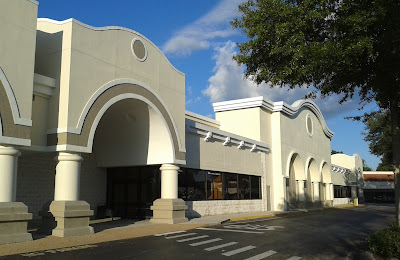 Today on AFB, we revisit the former Oviedo Albertsons store. After sitting empty for nearly 10 years, quite a bit of change has happened since we last saw this place in August 2018. To bring everyone up to date on the fate of store #4412, I returned to Oviedo about a month ago to see how dramatic the changes were...

As you can tell by comparing the above image with the first one of the abandoned Albertsons, well, you'll determine there isn't much to compare! This might as well be a completely different building I'm taking you all to today, but trust me, this was the former location of Albertsons #4412 (and the original building too). After sitting empty for all that time, the former Oviedo Albertsons is now home to Sprouts Farmer's Market. This store is Sprout's second location in the Orlando area, which opened on June 19, 2019. In the process of getting this building ready for Sprouts, pretty much everything from Albertsons was wiped away. This place was gutted to the steel shell, with the facade completely rebuilt. There isn't a trace of Albertsons to be found here in Oviedo anymore, with the plaza's remodel even going so far as to change the name of the plaza and the building's street address! The only clue of Albertsons ever being here is to look at the shape of the building from above on Google Maps, but that's about it. 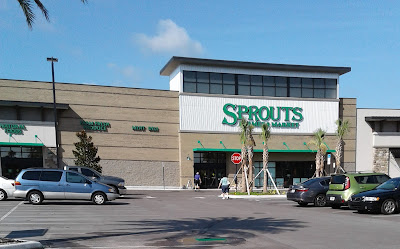 For those of you unfamiliar with Sprouts, they're another one of the many new organic grocery chains entering Florida. Sprout's stores fall into the same category as Lucky's - smaller stores with a more lighthearted, less pretentious approach to organics. I had never been to a Sprouts prior to this day, so not only did I come here to update everyone on the fate of this former Albertsons store, but also due to my curiosity to see what Sprouts was all about. 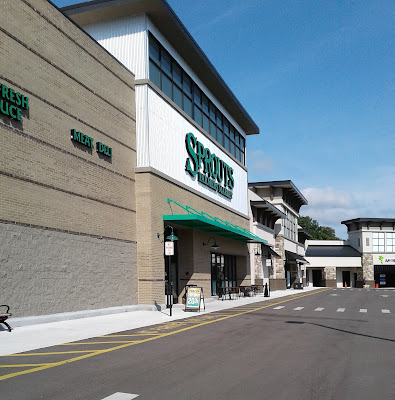 Here's a close-up look at Sprouts' facade, the empty right half of the building visible in the distance. While there isn't much left to see from Albertsons here anymore, we'll still take the time to head inside and see what this newcomer to Florida is all about: 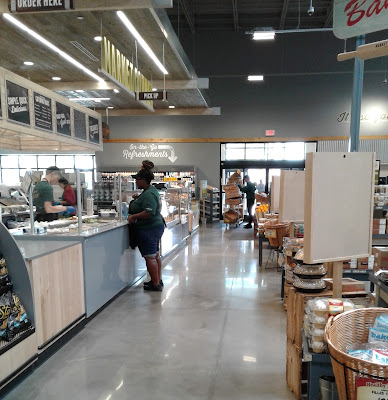 Stepping through the front doors, the first thing you see is a large island that's home to the deli and prepared foods department. From what I read in an article about this store, this location was to feature a new interior layout for Sprouts, serving as a model for new locations opening in the future. However, I can't find the article where I read that again to link back to it. So if you've been to Sprouts before and this layout looks odd, that's why! 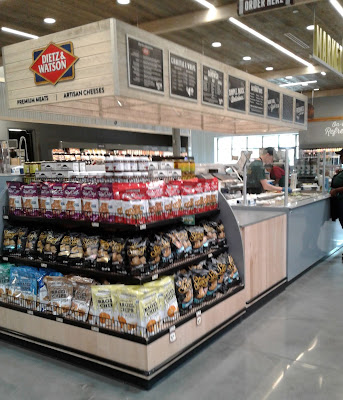 At most other organic-focused grocery stores, the first department you enter into is usually produce. While most organic stores seem to like that layout to immediately entice customers with the colors and freshness of the produce, Sprouts is going in a different direction with this store. Here, produce is in the back middle of the store. While produce is still a very important department to Sprouts, this layout of putting prepared foods near the front entrance makes the store more convenient for people running in after work to grab dinner and go. It's an interesting diversion from the usual psychology of these organic stores, but this tweak makes a lot of sense. 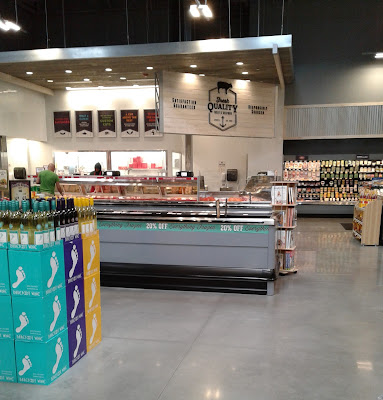 Along the right side wall, behind the deli island, was a small aisle with some refrigerated meals and a portion of the store's dairy department. It looks like I forgot to get a photo of that aisle, but you can see the end of it on the right side of this image. Anyway, behind the deli island we have the meat counter, which is the primary subject of this photo. Meats take up the back right corner of this store, with the coffin coolers in front of the meat department being the home to some prepackaged and frozen meats and seafood. 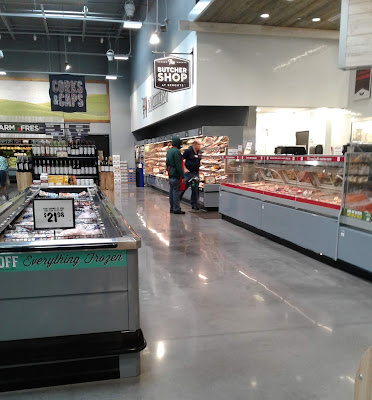 Here's a look into the back right corner of the store, looking past all the meat coolers. 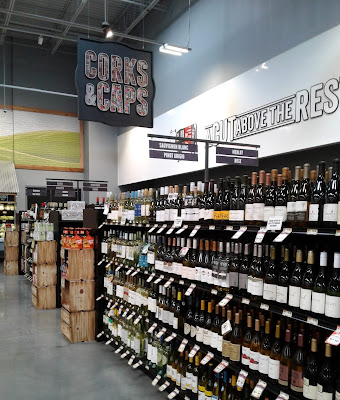 In addition to the meat department, wine and beer was also located in the back right corner. Sprouts calls their wine department the "Corks & Caps" department, at least per that sign hanging over the aisle. I don't know how well you can see it when you zoom in on the above photo, but all the letters in the Corks & Caps sign were made out of old bottle caps, which I thought was neat. 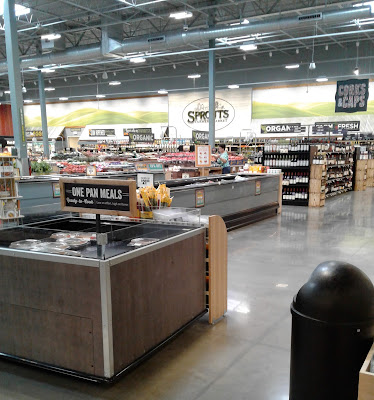 In the above photo, we're looking into the back of the store where the produce department is, as seen from behind the deli counter. However, to get to produce, we first have to wind our way through the bulk foods... 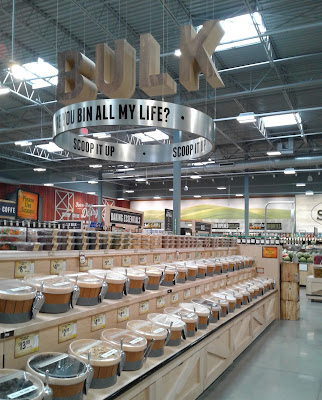 Oh bulk foods - where have you 'bin' all my life? Taking some punny (but classier) decor advice out of the playbook of Ollie's Bargain Outlet, Sprouts has a large selection of bulk foods located in the center of the store. You can see the produce department peeking out in the background of this image. 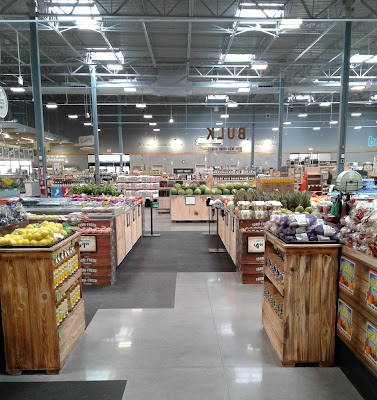 Now in the back of the store, here's a look up toward the front. This half of the building was originally home to Albertsons' pharmacy and health and beauty departments, as well as some of the dairy and frozen food departments. Here's a peek at what the interior of this side of the building looked like back in the Albertsons days. It's a big difference between then and now. 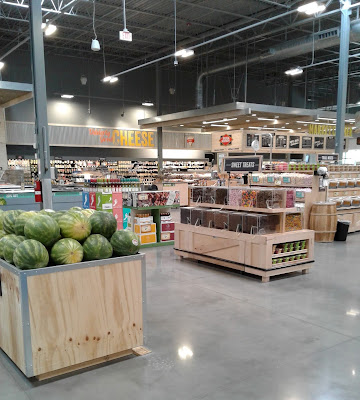 Well, I guess I did manage to get a photo of that aisle stuffed behind the deli island, just from this vantage point way in the back of the store! 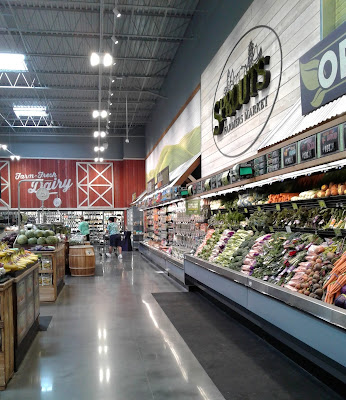 Here's a look down the back wall of the store, into the back left corner. Albertsons would have had some meat and dairy cases back here, now replaced with produce displays for Sprouts. Since Sprouts is "Farmer's Market" themed, the back wall of the store contains a mural of some rolling farmlands. In the middle of the mural is Sprouts' logo, which was made of fake grass. Since this is an organic store, what better way to make things look and feel more fresh and farmy than throwing some grass into the decor too? 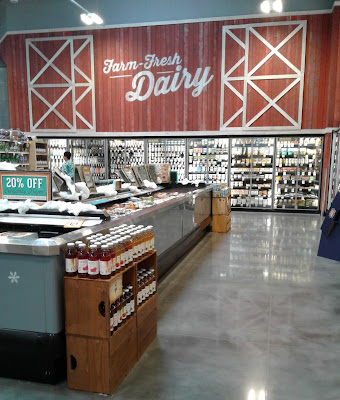 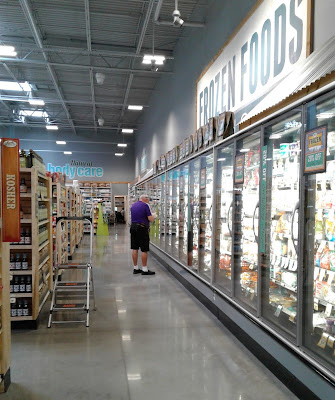 The frozen food coolers lined the left wall of the store. 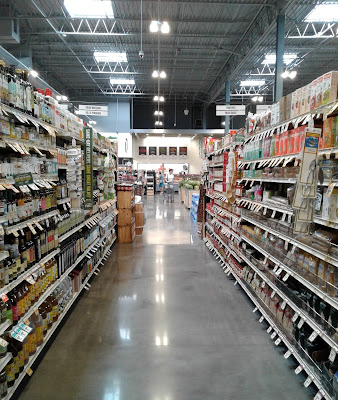 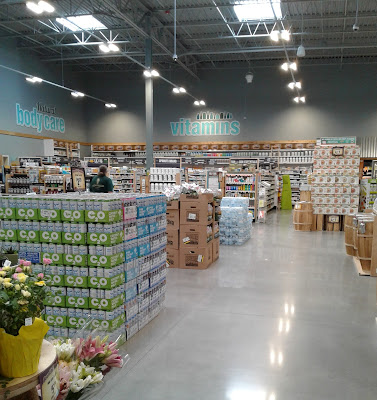 Sprout's health and beauty department is located in the front left corner of the building, right where Albertsons' old pharmacy counter would have been. 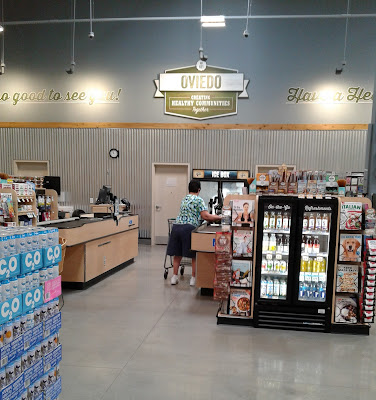 With this quick peek toward the checkouts, that completes our interior tour of Sprouts Farmer's Market. 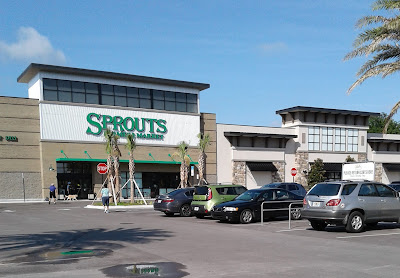 While there wasn't much to see here from Albertsons anymore, I thought Sprout's was a decent store. Sprout's is continuing to expand in Florida, with some new stores planned for the Tampa, Jacksonville, and South Florida areas, as well as more stores around Orlando. Right now Sprout's has 10 locations in Florida, although nationally they have 352 locations. Even if nobody wants to compete directly with Publix, Florida has become quite the place for a large variety of organic food shopping! 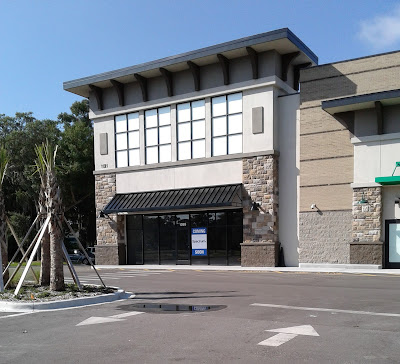 Off to the left side of the old Albertsons is the former Liquor store, which was also completely remodeled. Unlike many former Albertsons liquor stores, this one will be finding new life as offices for Spectrum Cable in the near future (according to the sign in the window). 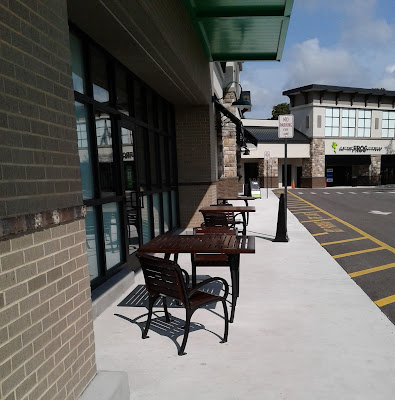 To finish off this update of the former Oviedo Albertsons, I also included a few photos to show off the remodeled plaza that branches off to the side of the old Albertsons. Here we're looking down the walkway in front of Sprout's, looking at their outdoor seating area. Sprout's also had an interior dining area located in front of the deli island, but I didn't get a photo of that due to an old man sitting at one of the tables giving me dirty looks as I walked by. 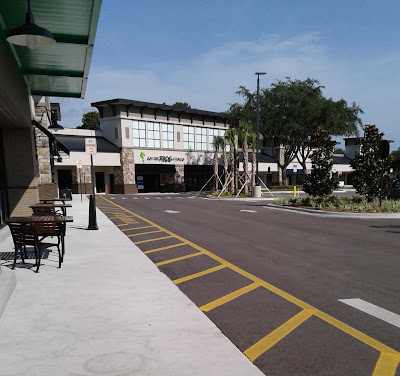 This plaza was hit with a lot of vacancies in the years after Albertsons left. However, with Sprout's now calling this plaza home, some new tenants have begun to move back into the plaza. In the distance you can see one of these new tenants, Eat The Frog Fitness (how the heck did they come up with that name?!), which was getting ready to open shortly after my visit here. 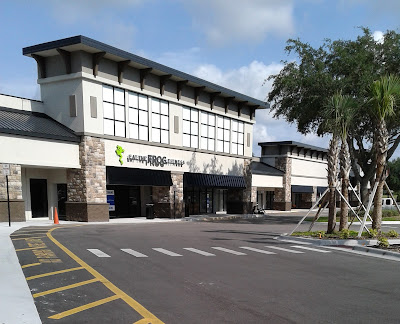 Here's another photo of the remodeled plaza, its previous look visible in this photo. 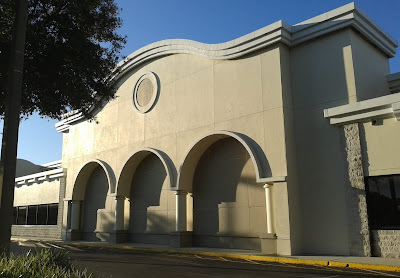 While the Albertsons is no more, Oviedo now has another up and coming shopping center to serve the residents of town. With all the other development going on around this plaza in the last few years, it was no surprise someone finally decided to grab this place and clean it up after so long. All the other development in this area seems to be leaning more upscale, and the remodel of this plaza seems to be going in that same direction.

Anyway, to finish off this post, here are a few interior photos of store #4412 that our Albertsons photo sleuth YonWooRetail2 dug up from the internet. These photos were taken during an in-store event, and showcase some of the departments with their Industrial Circus era signage: 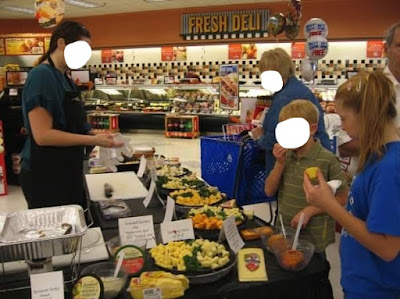 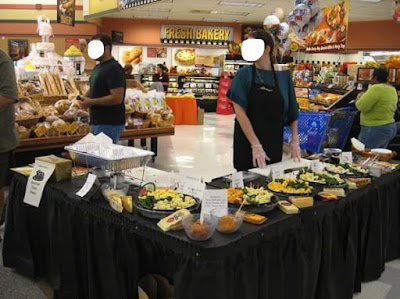 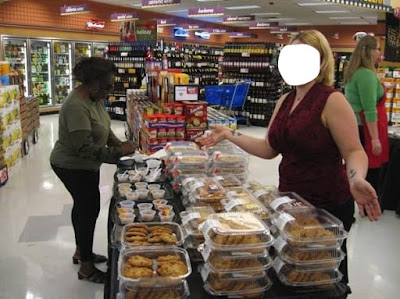 Now if only I can reach into this photo and grab one of those cookies, I'd be a happy blogger! 😁 Anyway, that's all I have for now. Since I wrote and scheduled this post prior to the passage of Hurricane Dorian in the event my power went out, hopefully I'll be able to keep things on track for another post in two weeks depending on how the power situation works out. By the time you're reading this we'll all know what our windy house guest Dorian did on his visit to Florida, and hopefully the results were more positive than destructive!