Have Yourself A Merry Little Bit Of Safeway 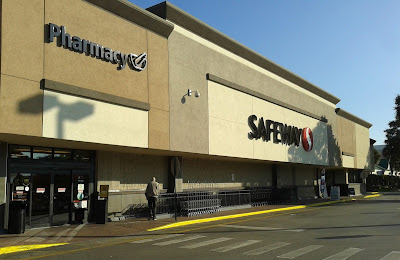 To conclude the year of 2016 here on AFB, we might as well take yet another trip to Altamonte Springs to visit one of Florida's 3 Safeway stores. This trip marked my first visit to a Florida Safeway since the conversion from Albertsons became official, and I was quite excited to see what the final product looked like in person. The last time I was here, the final touches to finish the renovations were still in the process of being worked on. This post will serve as a bit of a recap of this store. For a more extended look at the Altamonte Springs Safeway, please take a look at this post from back in August.

Unlike in that post from August, here we have a look at the building with its new Safeway signage installed. While the basic look of the building is still the same from the Albertsons days, the Safeway conversion included some new stucco, new paint, and some new tile accents along the front wall. It was a simple yet effective way to clean up the exterior a bit. 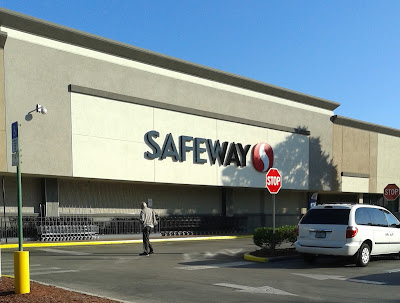 Another exterior view. Now let's jump on inside for a quick spin around the store: 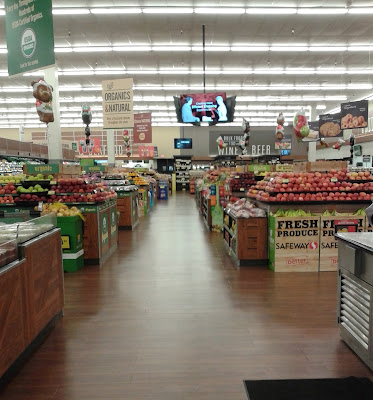 This is the view that greets you after taking a few steps inside from the right side entrance. Behind me are the prepared food islands and the sandwich/pizza/sushi counter. 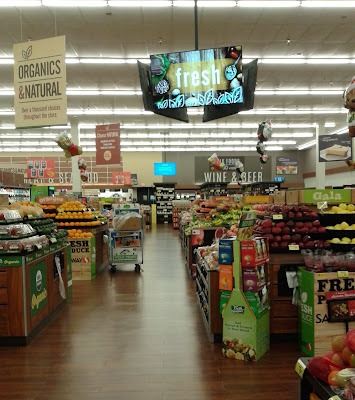 Another look into the produce department, which was enlarged as a part of the conversion. Compare this view to this view from the Albertsons days. It probably has a bit to do with the walls not being all white anymore, but the store feels much more vibrant and lively now that the renovations are over. 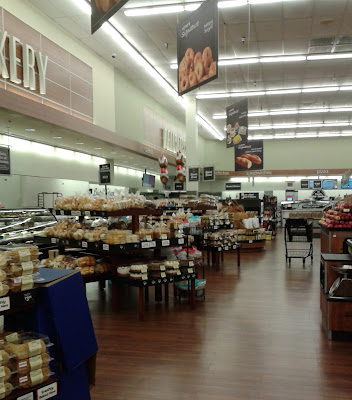 The bakery (home to those famous chocolate chip cookies), with the deli in the background. 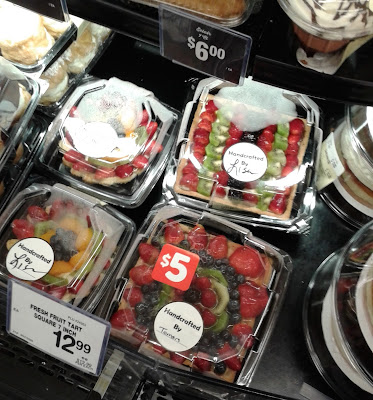 While in the bakery, I noticed that many of the products had stickers on them saying "Handcrafted by (employee name)". I thought it was a nice touch. 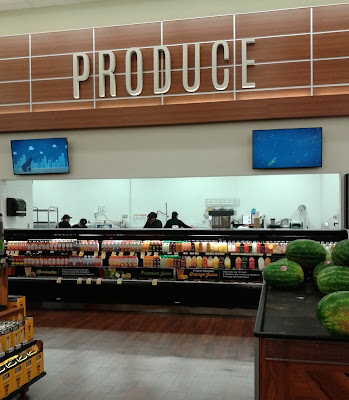 The produce department signage. Behind that cooler is the prep area where Safeway prepares their fruit infused waters and juices, fruit salads and cut fruit, and store made salsas and guacamole. From reading the reviews of these new Safeways, it seems like the infused juices are an especially popular offering here. 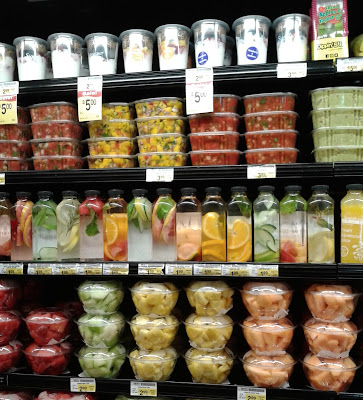 And here you can see some of those fruit infused juices that I mentioned on the third shelf down, along with some other pre-made produce department offerings. 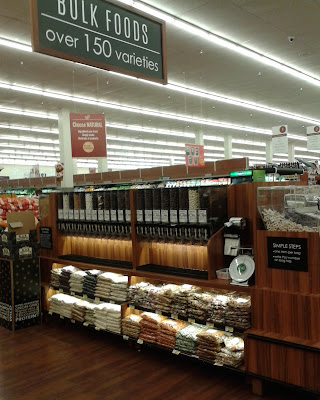 Between the Produce and Beer and Wine departments are a few small aisles of bulk foods. I didn't get a picture of this area the last time I was here. 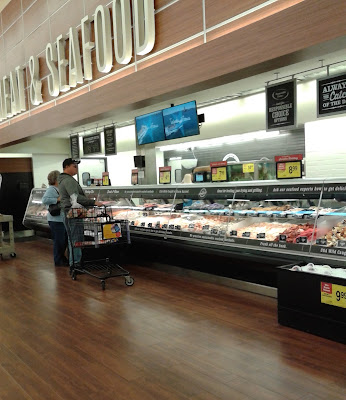 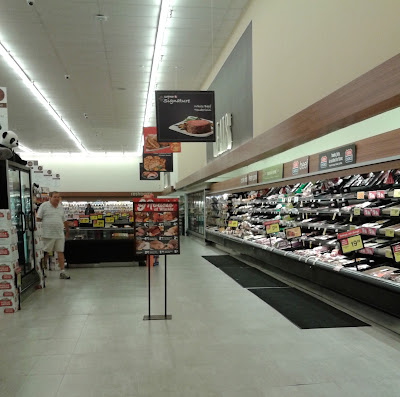 A look down the back wall from the Meat department. 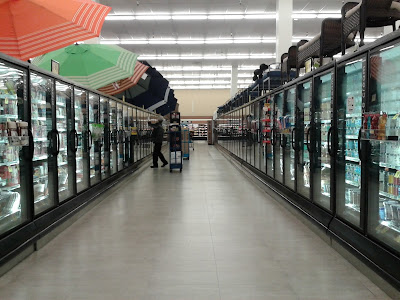 The frozen foods aisle was also doubling as a showplace for Safeway's selection of patio furniture and beach umbrellas. 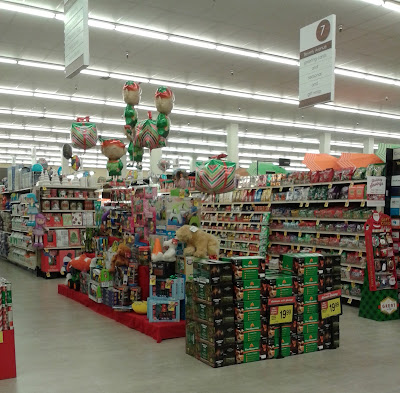 In the spirit of the season, here's a quick look at Safeway's Christmas department. This was located near the left side entrance to the store. 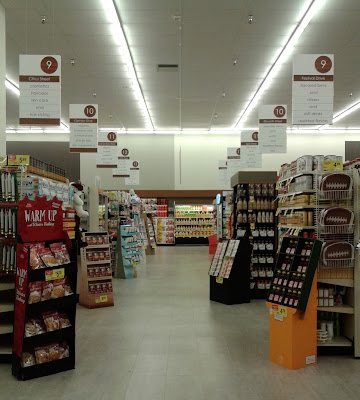 The center aisle on the left side of the store. I like this way this photo turned out. 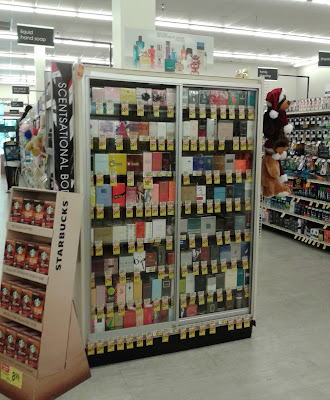 As you may recall in the last post, I mentioned Albertsons had dabbled with selling designer perfumes back in the early 2000's, a practice that seems to continue on to this day. Here's a look at the designer perfume lock up case here at Safeway, which was carried over from Albertsons. 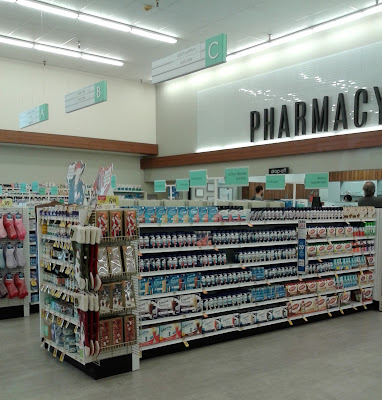 The pharmacy department. The last time I was here, the Aisle A and B signs were hung, but Aisle C's sign was still missing. 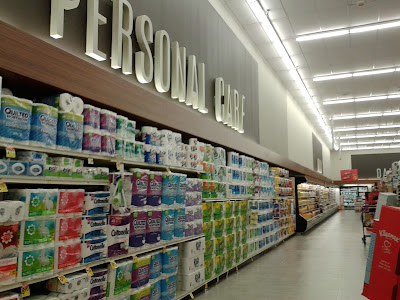 A look down the left side wall. 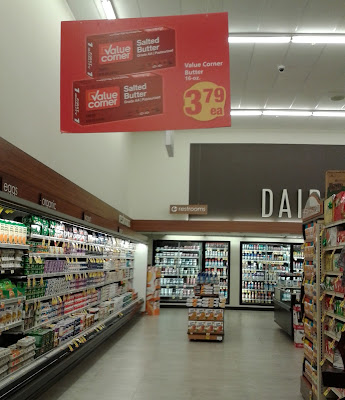 In the last month, Safeway (and probably Albertsons as well) introduced a new store brand called Value Corner, an example of which can be seen on that sign hanging over the aisle. I believe this brand is supposed to be a cheaper version of the Signature brand on some of the more popular items (similar to what Price First was to Great Value at Walmart). This is supposed to be a way to attract more value oriented shoppers. 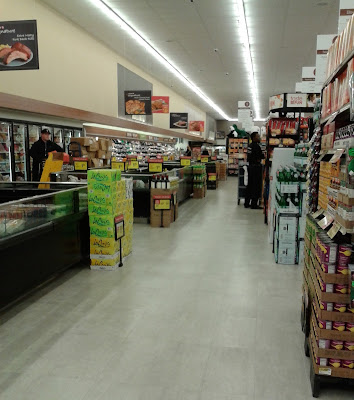 Another look across the back of the store, this time from the back left corner. 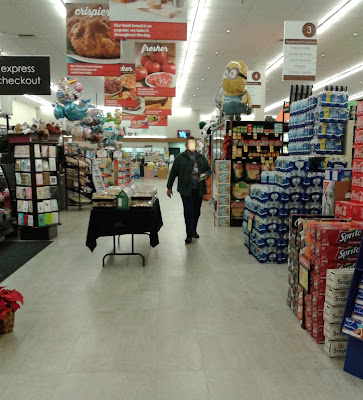 And now jumping back up front for a look across the front end. 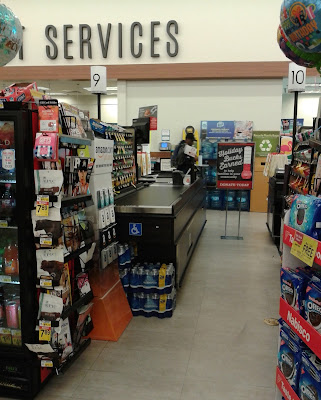 A closeup of the new register stations that were installed as a part of the remodel. Prior to these being installed, this store had the classic Albertsons turntable counters. However, the turntable hasn't completely gone away here. Instead of loading your groceries onto the turntable, the bagging station now features the turntable. 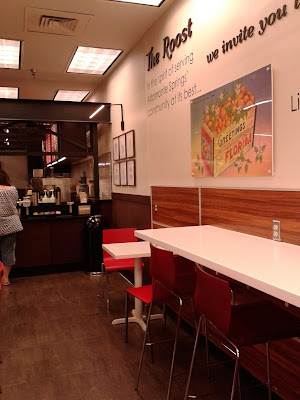 In front of the registers is "The Roost", this store's locally flaired sitting area. I didn't get a picture from inside "The Roost" last time, so I'm including one in this post. The name "The Roost" is a reference to the next-door Cranes Roost Park, a popular attraction in Altamonte Springs. 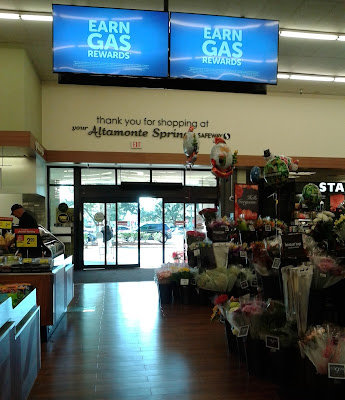 So that's about it for this quick revisit to the Altamonte Springs Safeway. Here are a few photos I took as I was about to leave. 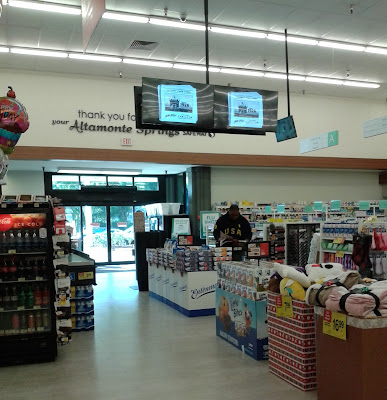 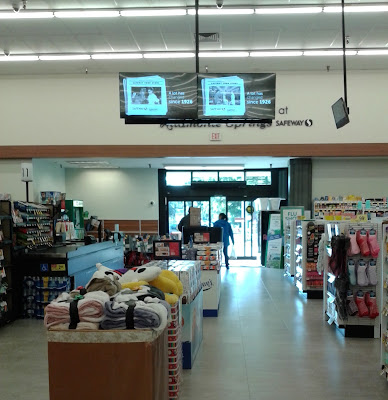 One interesting thing they had playing in the loop on the TV screens throughout the store was a short history of Safeway, showing how they evolved throughout the years. It was probably included to acquaint Floridians with what Safeway is. You can see part of the history loop on the screens in the photo above, but I couldn't get a really good picture of it. 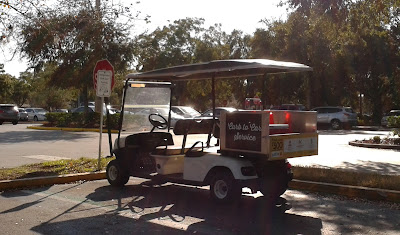 Another unique service I noticed they offer here is this "Curb to Car Service". It looks like someone will pick you up with this golf cart at the front of the store and drive you and your groceries to your car. I've never seen a golf cart escort service like this at a grocery store before. 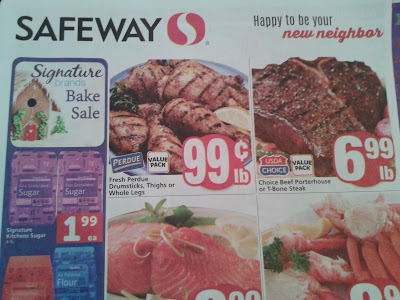 The ad from the week I came here, showing how Safeway is "Happy to be your new neighbor". And I think people are happy to have these new Safeways around as well. The online reviews of the three Florida Safeways have increased significantly with positive feedback since the conversion from Albertsons. Also, while the photos you see in this post were taken early in the morning on a Saturday, I came by here again that same day in the evening and couldn't believe the crowd that was here! I saw quite a few of people with full carts doing some serious grocery shopping too. I really think Safeway is working in Florida. Not only that, but the Publix stores in Altamonte Springs are responding to Safeway. I went to two nearby Publix stores after my initial visit to Safeway that morning, and both of those Publix stores now offer Instacart grocery delivery, with delivery available in as little as an hour with the first delivery free (the same promotion Safeway uses with their grocery delivery service, which they were the first to bring to the area). Additionally, Publix's hot foods bar is typically $7.99/pound from what I've seen at many of their stores (including in the Orlando area). At the nearby Publix I went to which had a hot foods bar, the price dropped from $7.99/per pound to $6.99/pound (the same price as Safeway's hot foods bar, which is the price it has been since the conversion). 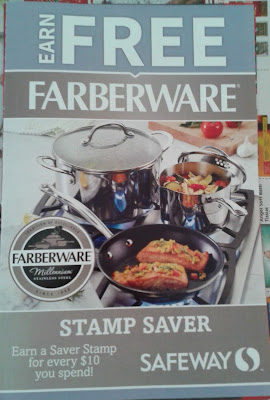 I don't know if the other Safeway stores are doing this, but the Florida Safeways are taking part in the Albertsons stamp saver promotion. I remember getting really into these stamp saver things back when I went to Albertsons regularly, and I was able to get many pots, pans, and dishes this way. These promotions are somewhat reminiscent of the S&H Greenstamp days, and it's nice to see something similar continue on. 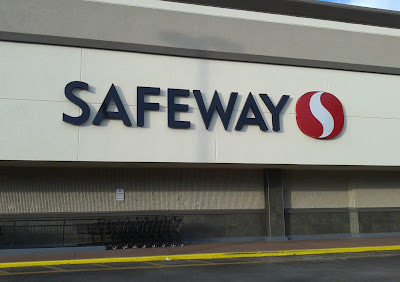 So with that, we've completed our short return trip to the Altamonte Springs Safeway. And that's also a wrap for AFB for 2016 (unless some breaking news happens between now and the new year). I hope everyone has a Merry Christmas and a Happy New Year, and I'll see everyone on January 8, 2017 for the first store tour of the year!