So the other day I decided to head back to the Altamonte Springs Albertsons to check on the progress of the remodel and get some questions answered. I originally wanted to go to Oakland Park instead, however I ended up changing my mind since I forgot to photograph a store nearby here that was rather significant to Florida supermarket history the last time I was in the area. However, when I went back to that other store to get some pictures, it ended up looking a little, how should I put this...flat. It's amazing at what changes in only two months. Same goes for the Altamonte Springs Albertsons, which at least changed for the positive compared to my other experience that morning. This time, it actually looks like a remodel in here compared to the pictures I took in October, where it looked like nothing was happening.

And like I said, along with getting some more pictures of the remodel in progress, I also spoke with two employees (one of which was a manager) about the remodel and what it has in store. Albertsons is pumping a lot more money into this store than I originally thought they would. The remodel is way more than a decor swap. Albertsons is putting at least $1 million into the Altamonte Springs store (possibly more even), and the figure is probably around the same at the other two stores. The remodel at Altamonte is going to include completely rearranging the store, with just about everything being replaced. The store is getting all new freezers and refrigeration units, a new layout, new decor, a large and expanded selection of prepared foods including a salad bar, wing bar, soup station, sushi station, and a few others, and they will also be adding (and I never thought they would do this in Florida again) - an in-store Starbucks! While I'm not really a Starbucks person (gasp!), I know they can be a big draw into the store, and people like having a cup of coffee or a double iced mocha frappuccino whatever else latte to sip as they do their shopping. Most of the Florida Albertsons built from 1999 onward usually included a Starbucks, although any remaining Starbucks locations inside of Albertsons stores in Florida were removed by 2009. I can't recall any stores older than that having a Starbucks, so this will be a first for Altamonte (and the other two stores if they're getting a similar treatment).

And I know what everyone is thinking - "What did AFB find out about this Safeway conversion thing?!?!" I didn't go up to either employee and begin by directly asking "Is this store becoming a Safeway, yes or no?" (too many questions would arise if I said it like that). I gradually lead into bringing up Safeway after commenting about the remodel, what it would involve, and how it will be nice to see new life coming into this store, gradually leading into a more polite and less direct version of the Safeway question. The manager dodged the question. The other employee responded with this: "This remodel is going to be really big." Interpret those responses however you wish. Even though hard proof in answering the question of Safeway is still up in the air, I did confirm one thing: the remodels aren't going to be complete until Spring 2016, which would make sense given the amount of work they seem to be doing, so the switch to Safeway probably wouldn't occur until the work is complete. Anyway, let's take a look at some of the changes that have happened since October: 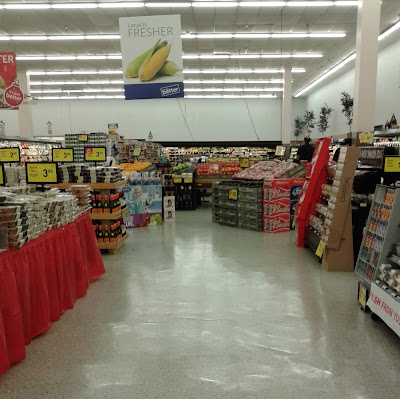 Over on the right side of the store, the produce department has been condensed to allow for the addition of another half aisle of products that were moved due to the installation of some new freezer units. See here for what this area looked like in October. It feels much more cramped with all of these displays shoved into a smaller area now. 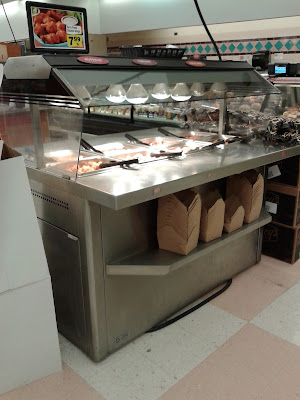 This is the wings bar. I believe this was added since my last visit, but I'm not sure. Behind this was the olive bar, which I do remember from October. Also, this store has a sub station located right next to the right side front door, attached to the cheese counter. That was there in October, but I forgot to mention it in the original post. 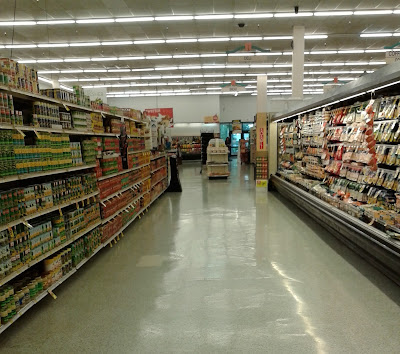 The 'new' aisle 1. The dislocated canned foods on the left were added into space that was originally a part of the produce department. I believe this set up is only temporary. The produce displays used to go right up to those lunch meat coolers on the right. 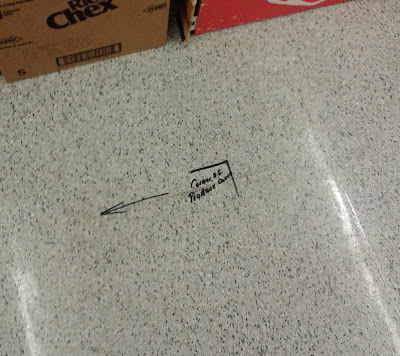 The produce department is going to be moving up into the front right corner of the store, next to the right side entrance. These marks on the floor indicate this shuffling of displays will be happening pretty soon, and will dislocate aisles 2A, 3A, and 4A. 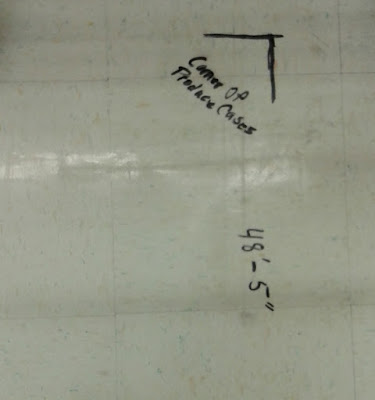 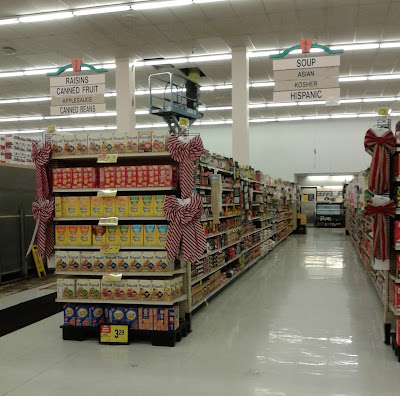 Some electrical work going on in preparation for the installation of the new freezer units. 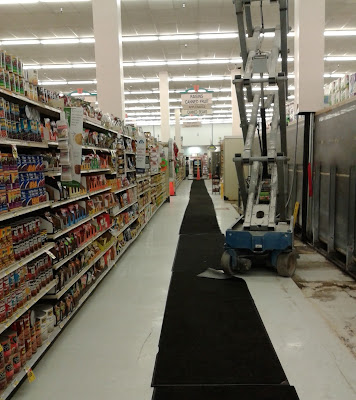 Looking up aisle 5. With the forklift and all the work going on over here, I'm surprised they didn't completely block off this aisle for safety reasons. The dislocated canned foods from aisle 1 were originally located on the right side of the aisle in this picture, against the freezers. 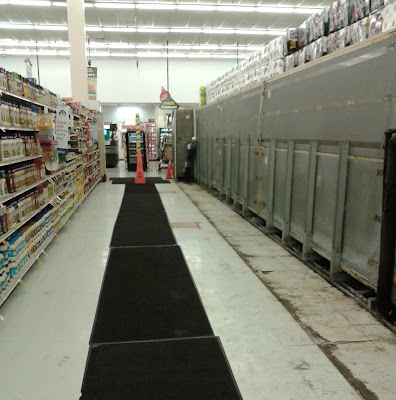 Further up aisle 5. The rugs are covering pieces of plywood that were installed to cover the holes created to access the piping for the freezer units. 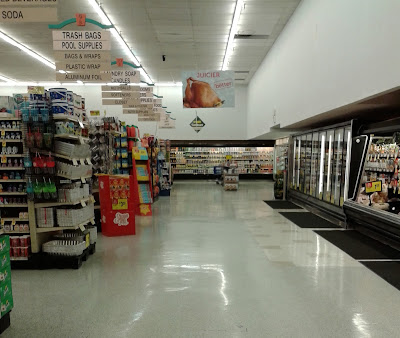 Still no traces of new decor to be found. The walls are still all white. 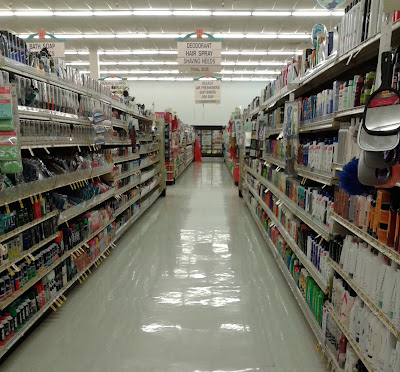 The left side of the store is still fairly intact. Right now there's only one big project going on over here... 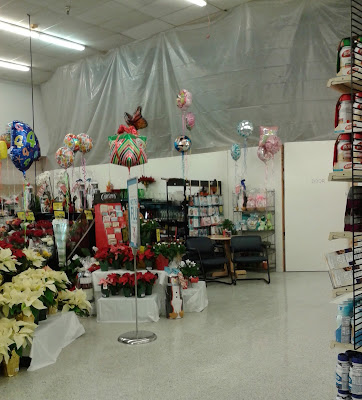 ...and that's the construction of the new Starbucks in what was previously this unused space next to the pharmacy. I believe this spot was home to a video store/rental area after this store's last remodel in the late 90's. Prior to that, this area was home to the side entrance into the store. 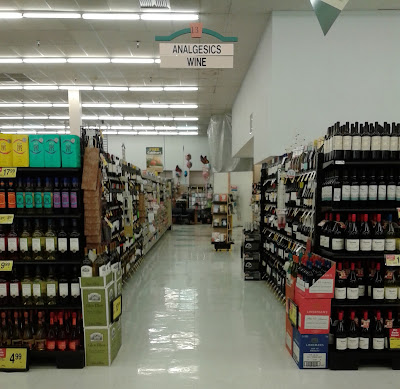 For now, you can still find the analgesics next to the wine. If they rearrange this area, how will I ever find either?! I'd be so lost. 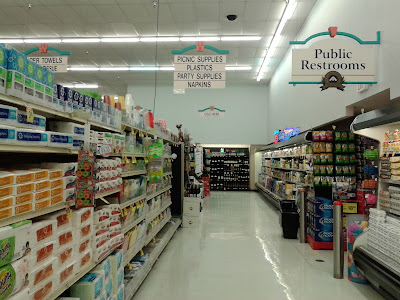 The "decor overload" once again. Another big question is this: What will the new decor look like? Will it be the typical current Albertsons fare (like this and this)? Or will it be Safeway's Lifestyle 2.0 interior (which looks like this)? 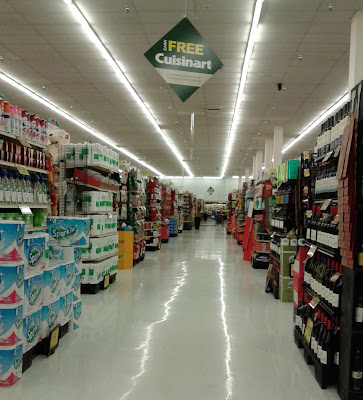 Looking across the store down the main center aisle. Big changes are happening at Altamonte, but it looks like we'll have to wait a little longer to see just how "this remodel is going to be really big." 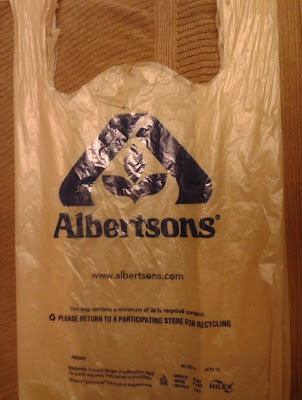 Before moving on, I just wanted to say that during this trip to Altamonte, I at least got a current Albertsons bag, unlike in October when I got one that was probably sitting around since 2012.

In addition to my pictures from Altamonte, contributor Otis "Joe" Smith from flickr sent in these pictures of the Largo Albertsons from about a week ago, giving us a quick look at how the remodel there is progressing: 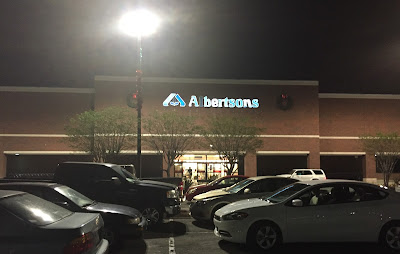 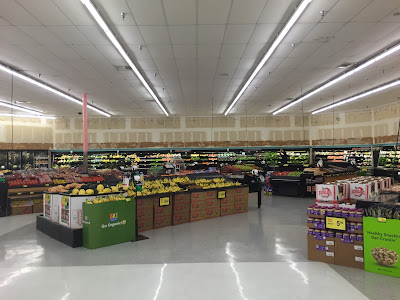 So far at Largo, they're still working at stripping out all of the old decor, which was the same Blue and Green Awnings interior that Altamonte Springs had. I have pictures that another contributor sent in of the interior of this store long before the remodel started, however I've been wanting to save those pictures for when this store finally gets a full AFB post.

Since I've never been to this Albertsons, I'm not too clear on the layout, but I believe it's something like this: Produce is in the front right corner, the bakery is on the right side wall after produce, the deli is located in an island across from the bakery, meat and seafood is in the back, and the pharmacy is in the front left corner. Correct me if I'm wrong on any of that. 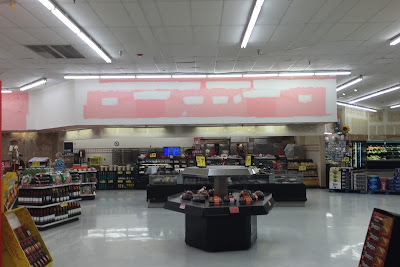 Looking toward the front of the bakery. 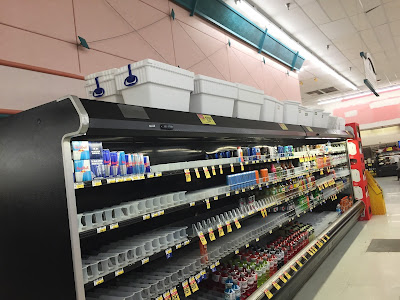 I believe the wall behind the drink cooler is the front facing wall of the deli island. The deli island still has the original Blue and Green Awnings wall texturing, which for some reason has always made me think of those uncomfortable decorative pillows people put on their sofas for show. 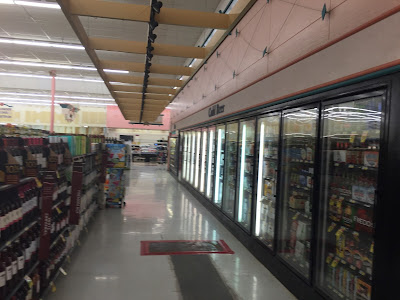 Beer coolers line the back of the deli island. Looks like some work has been done in regard to the coolers with that patched up hole in the floor. 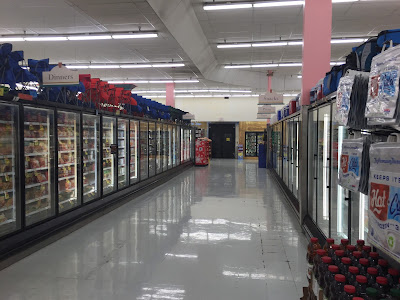 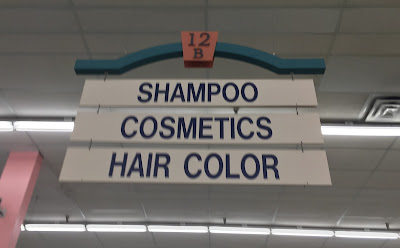 This store still has most of it's Blue and Green Awnings signage left as of earlier this month, not just the aisle signs and frozen foods category markers like Altamonte. 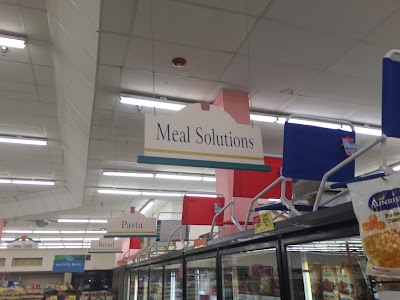 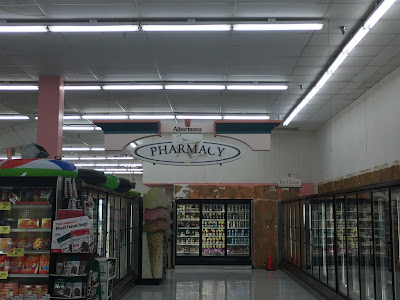 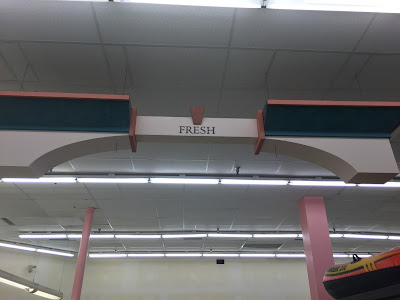 Fresh what? I wonder if this sign went missing as a part of the remodel, of if this has been like this for a while.

Closeup of one of the department signs. The ribbons and Albertsons Guaranteed Quality logos were notorious for falling off of these signs. 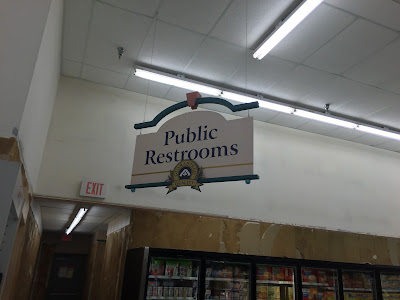 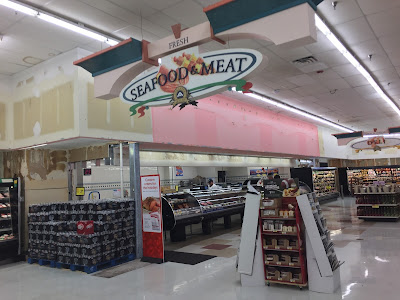 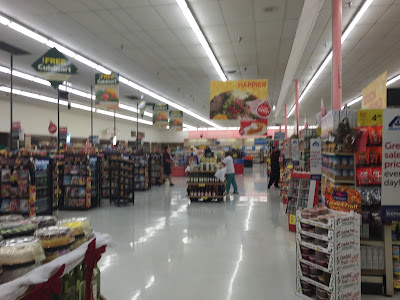 So it still looks like there's a bit of work to be done in Altamonte Springs and Largo. I'm sure the same is true for Oakland Park as well. However, Oakland Park had the basic version of Industrial Circus, so ripping all of that decor down isn't as difficult a removing all of the decorative wall patterning and decorations that Blue and Green Awnings had.

As always, feel free to send in any Albertsons Florida remodel pictures you may have, or any information you might have on the progress of the remodels. I'm not sure when I'll be near one of the three stores again to check on anything, but hopefully these remodels are going to be as big as they claim they will be, whether the signage on the front of the store says Albertsons or Safeway. I just hope this huge investment pays off for Albertsons or Safeway or whatever these stores will be called when all of this is over. Let's make Publix scared!

Anyway, have a Merry Christmas and Happy New Year Everyone! Until the next time,