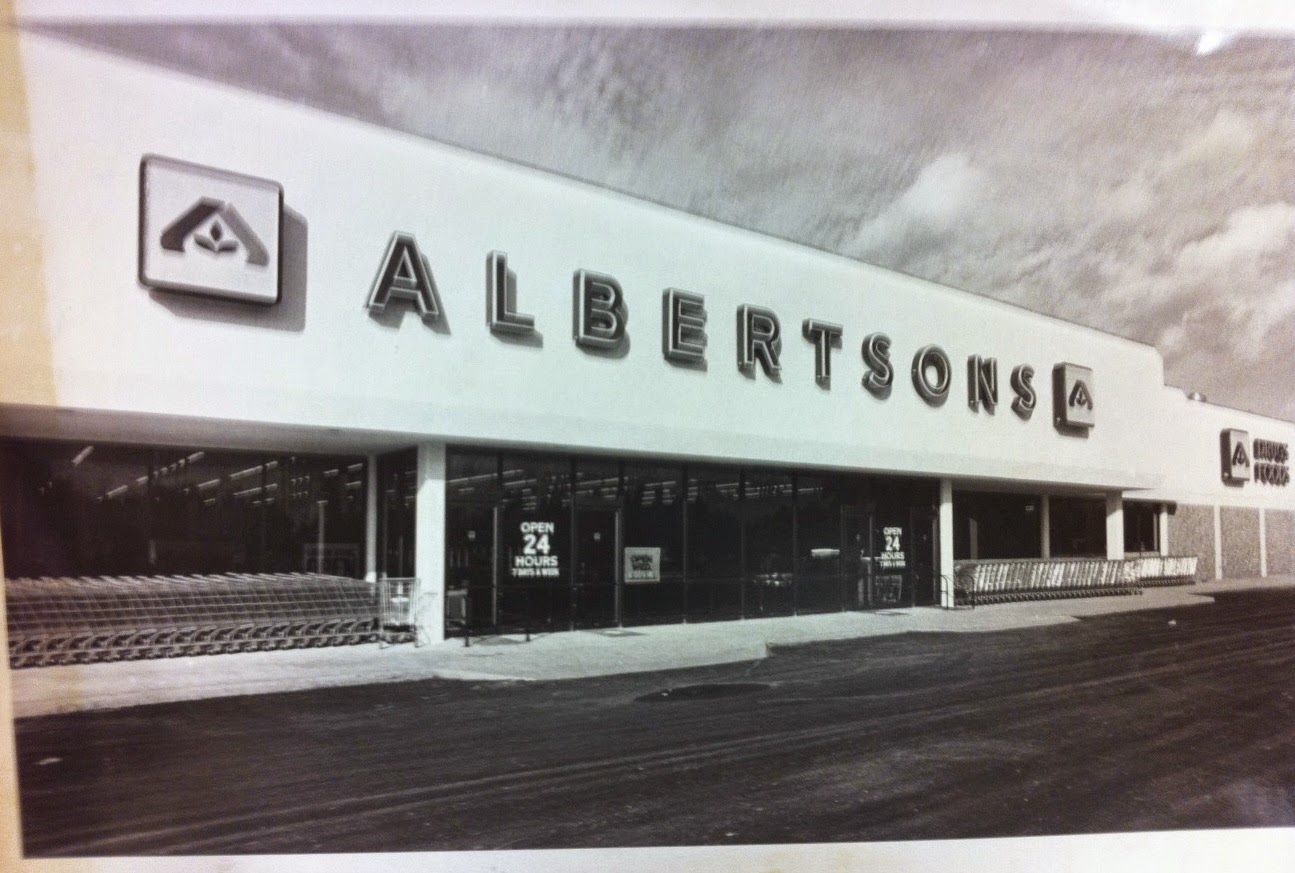 Albertsons #4328
4481 Lake Worth Road, Lake Worth, FL
***Photos of this store courtesy of Graham of the Retro Palm Beach Blog***

We'll be finishing off the year here on the Albertsons Florida Blog with this little blast from the past, courtesy of new Albertsons Florida Blog contributor Graham. Graham was able to provide us with some great classic photos of this store, as well as some current photos, which we'll be taking a look at below. The classic photo you see above was taken on December 1, 1978, approx. 1 week before this store's grand opening on December 6, 1978 (which, coincidentally, was exactly 36 years ago to the day when this post went live). The Lake Worth Albertsons was the first Albertsons in Palm Beach County, and the fourth Albertsons overall in South Florida (preceded by three stores in Broward County). Other than receiving an upgraded logo, the Lake Worth Albertsons stayed in practically original form until 2003, when the store was given an interior upgrade and reconfigured entryway, all of which we'll take a look at in more detail below. The Lake Worth Albertsons had a healthy 31 year run before finally meeting its end on October 22, 2009, the same day that three other Florida Albertsons stores on the West Coast of the state closed for good. 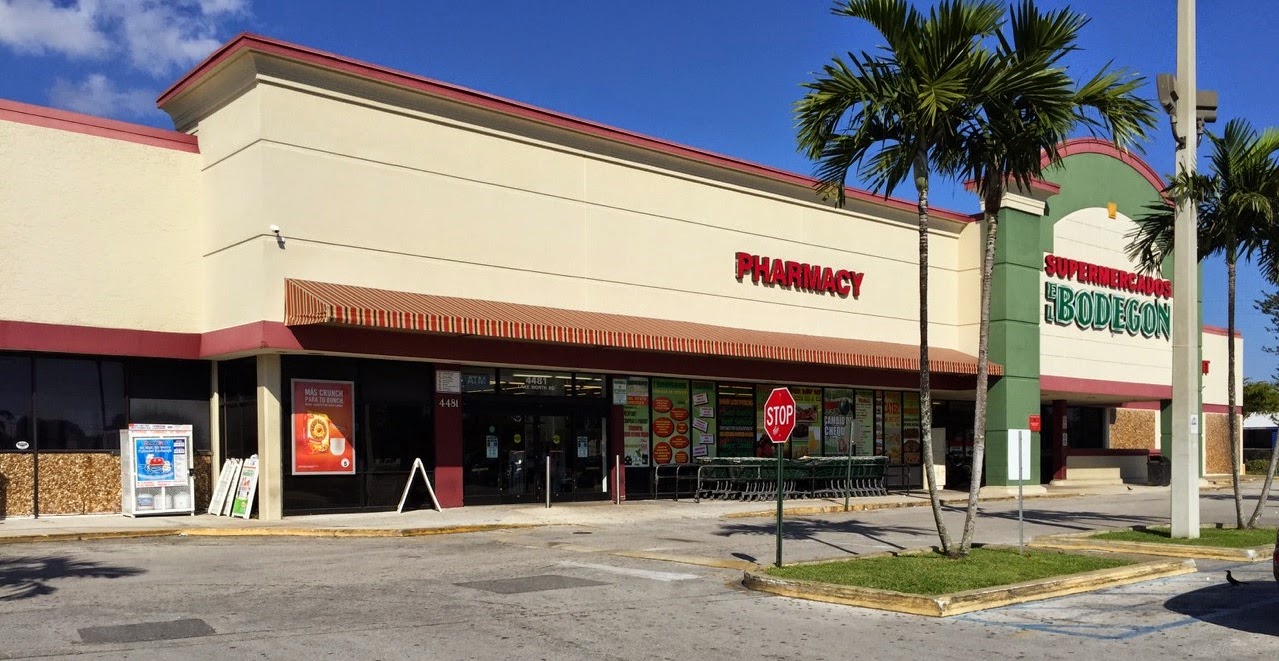 Now, jumping ahead to 2014, the former Lake Worth Albertsons has since become a location of Supermercado El Bodegon, a Hispanic supermarket chain with 4 locations throughout Palm Beach and Broward Counties. This is actually the second Hispanic market to operate at this location since Albertsons closed. The first, which opened not long after Albertsons left the space, was called Presidente Supermarket. As far as the architecture of the store goes, this place still looks just like Albertsons left it on the day they closed, except with some new paint accents. This was a Skaggs Model Albertsons, modified with some early 2000's Albertsons elements during the 2003 remodel, like the archway over the reconfigured entryway and the crown molding type decoration along the roofline. Also, the liquor store at this location has a bit of an odd story behind it too, which I'll go into in more detail below. The photo above was taken at a similar angle to the classic photo from 1978 to show the then and now contrast. 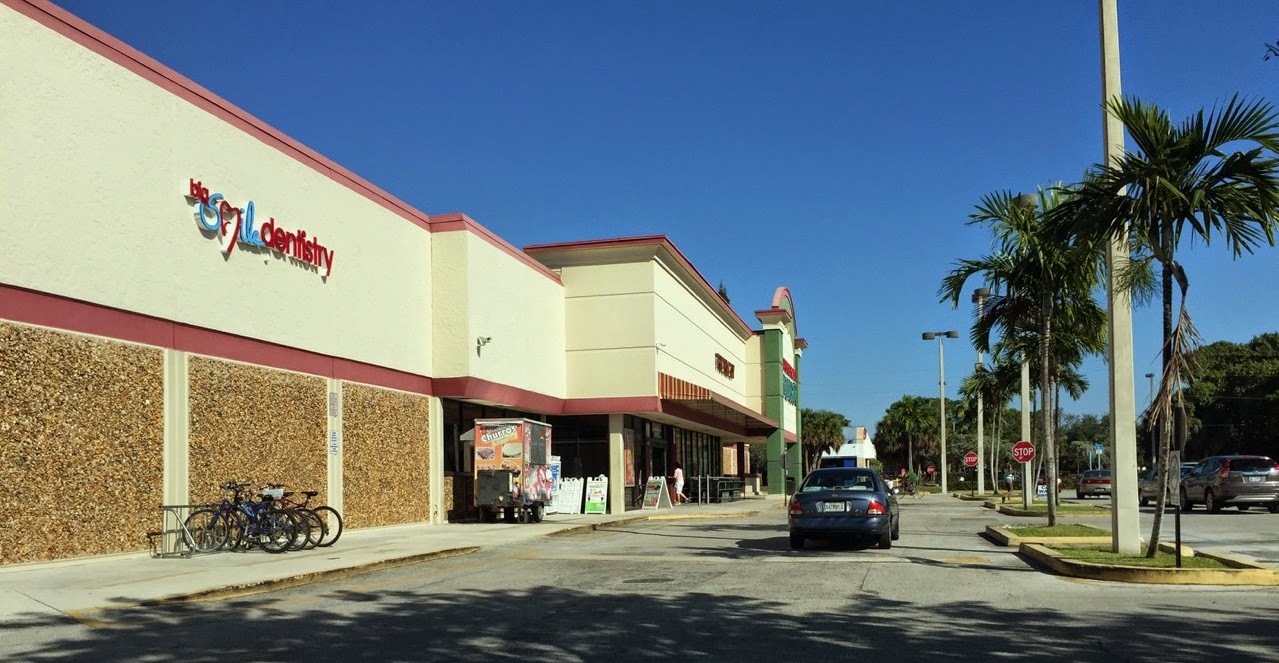 Looking down the front of the store, you can see more of just how well this place has been preserved. Those stone panels that line the exterior of the store are original from 1978! Those stone walls were a staple element of Albertsons exteriors from the 70's all the way into the early 80's. They sometimes got covered up during remodels, however most of the time Albertsons left them in place. 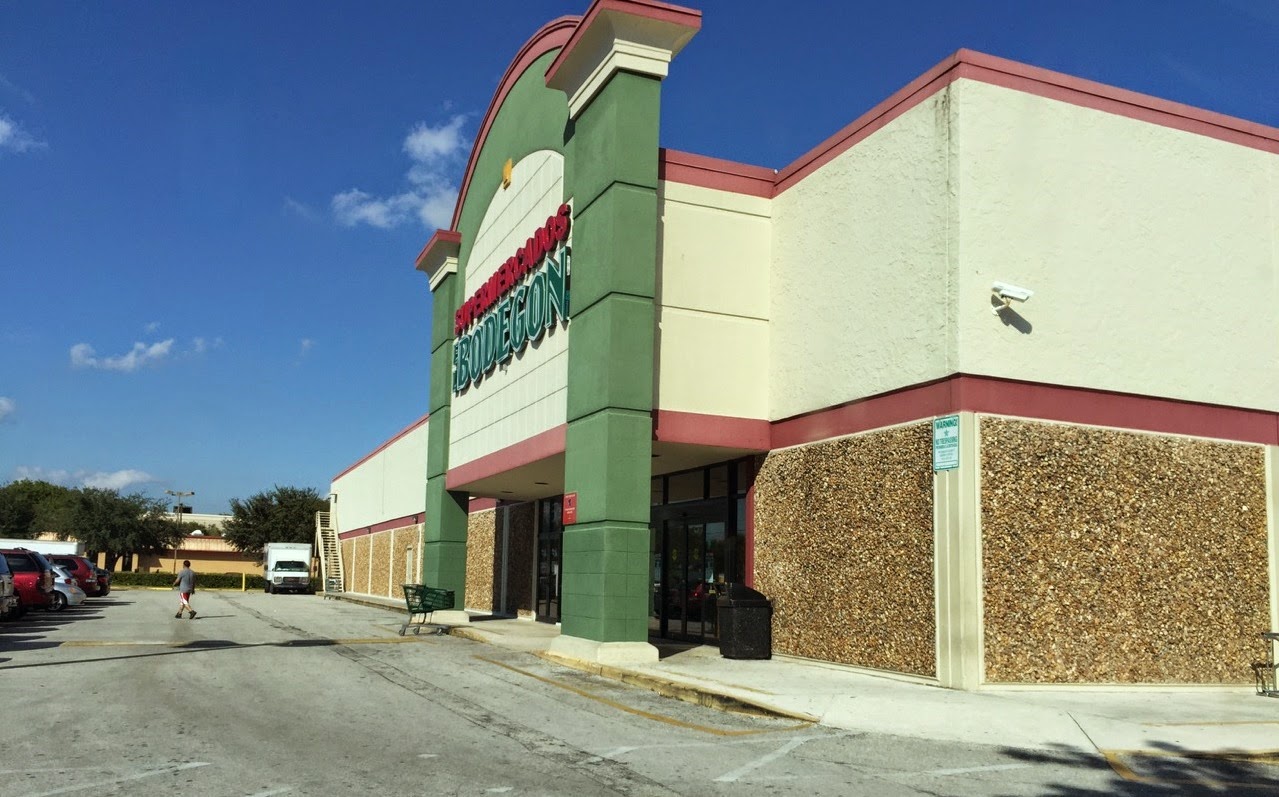 Now looking down the left side of the building. Under that awning was the entrance/exit into the liquor store as well as a side entrance into the main store. 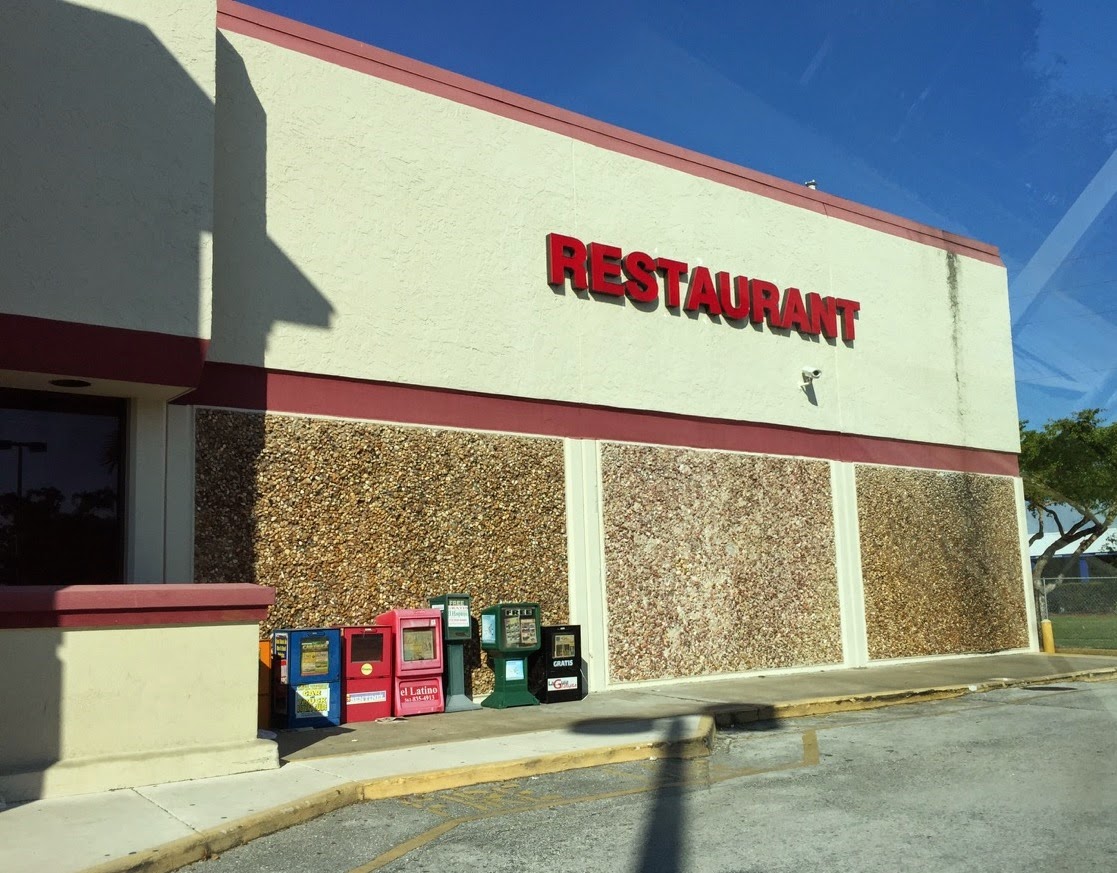 According to Graham, this store's liquor store was once located here in the front right corner of the building, with the entrance located where that off-colored stone panel is currently located under the 'Restaurant' sign. Originally, the liquor store was located over on the left side of the building next to the side entrance, but at some point it was moved over here, probably when this store was remodeled sometime in the late 80's from the 70's Stripes to Blue and Gray interior. Then apparently during the 2003 remodel, the liquor store was moved back to its original location over on the left side. I've seen Albertsons move the liquor store entrance on some of these Skaggs model stores up to the front from the side of the building before to create more sales space for the liquor store, however, this is the first time I've ever heard of the liquor store being moved across the store, just to be put back where it originally was! Considering how off the color of that stone panel is, it does look like something was covered over there at one point. I'm just surprised Albertsons took the trouble to match the stones after all those years. Usually when Albertsons covers over old doors/windows in these Skaggs model stores, they just go with stucco and don't even bother with the stones.

Here's a closer look at that off-color panel: 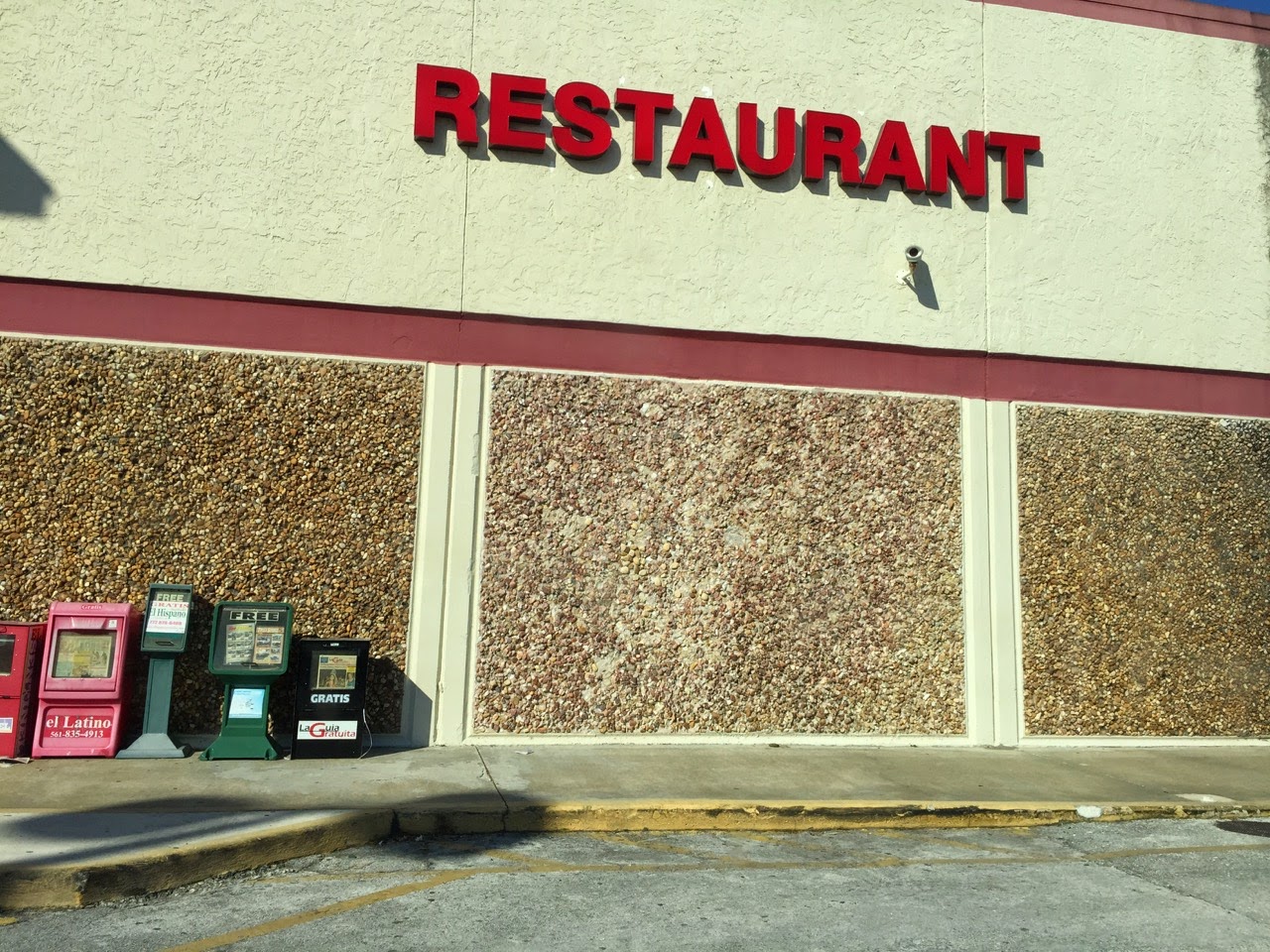 So that about covers the exterior. Now its time to head inside: 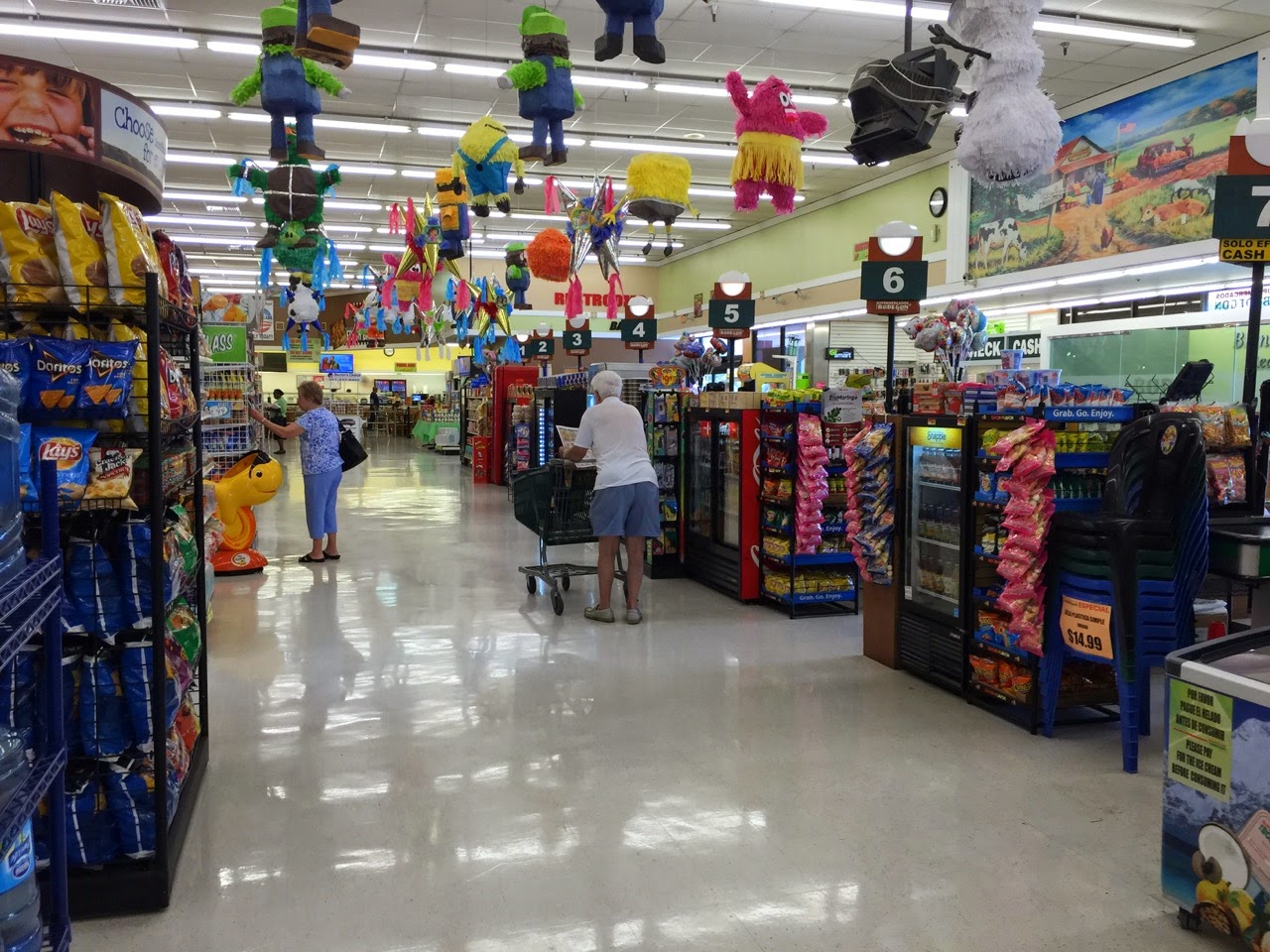 ¡Muchas piñatas! Those piñatas hanging from the ceiling really make this store seem very festive as we look down the front end. According to Graham, this store is usually very busy. 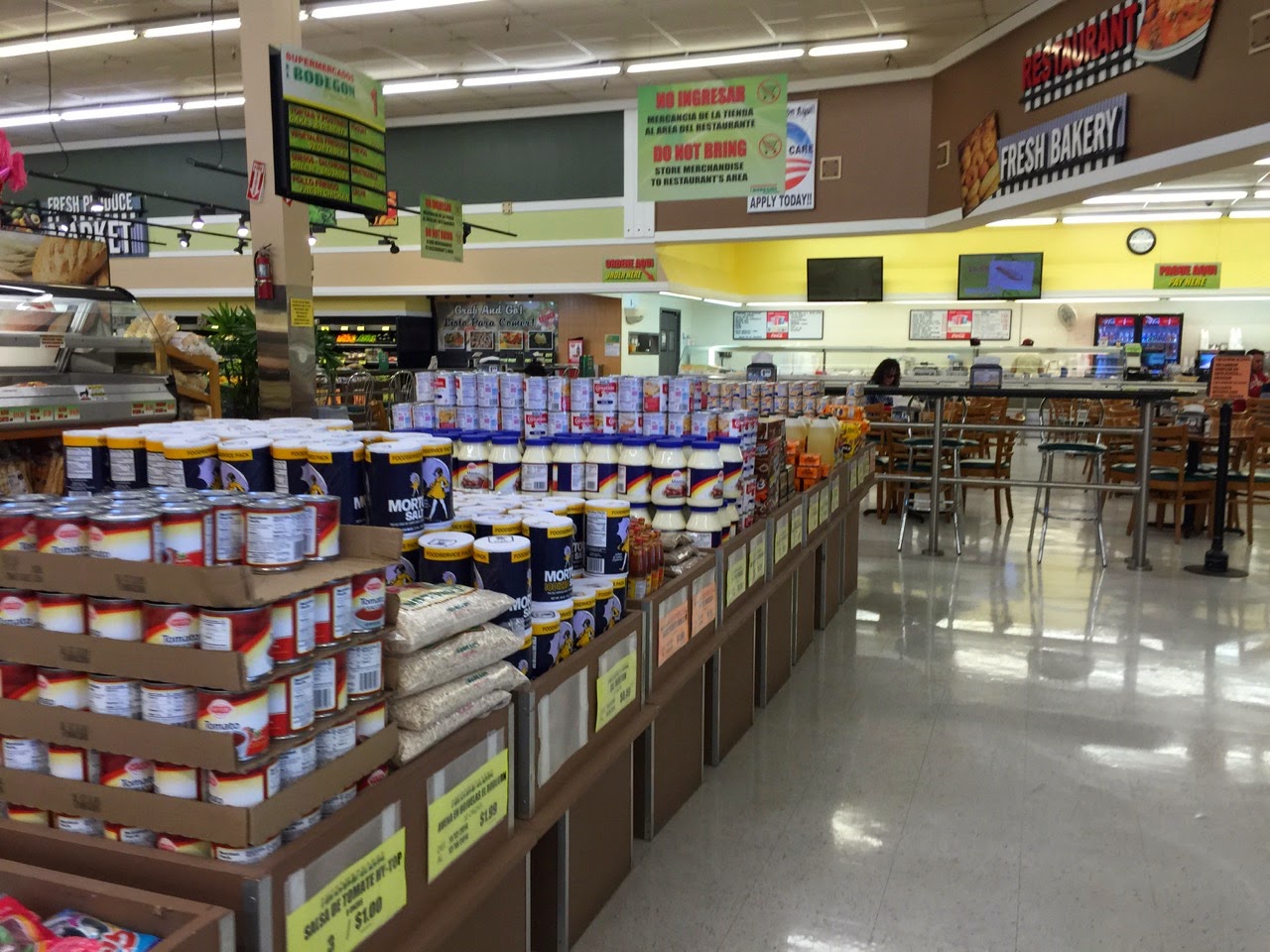 Looking into the Bakery and Albertsons' former Deli. which El Bodegon has since converted into a restaurant and dining area. Most Hispanic markets in Florida that I've been to typically have a restaurant counter that serves Hispanic foods in place of a deli like traditional supermarkets. This is located in the front right corner of the store. The department signage you see on the walls is from Albertsons' Industrial Circus interior from the early 2000's. This store got the more basic version of the signage, as there was a more elaborate, 3D version that was also used. El Bodegon left almost all of Albertsons' department signs hanging on the walls. As you can see in the photo above the lettering on the sign that once said "Fresh Deli" was replaced with "Restaurant", in red instead of Albertsons white letters. They were pretty good with matching the font on the rest of Albertsons old signs though. 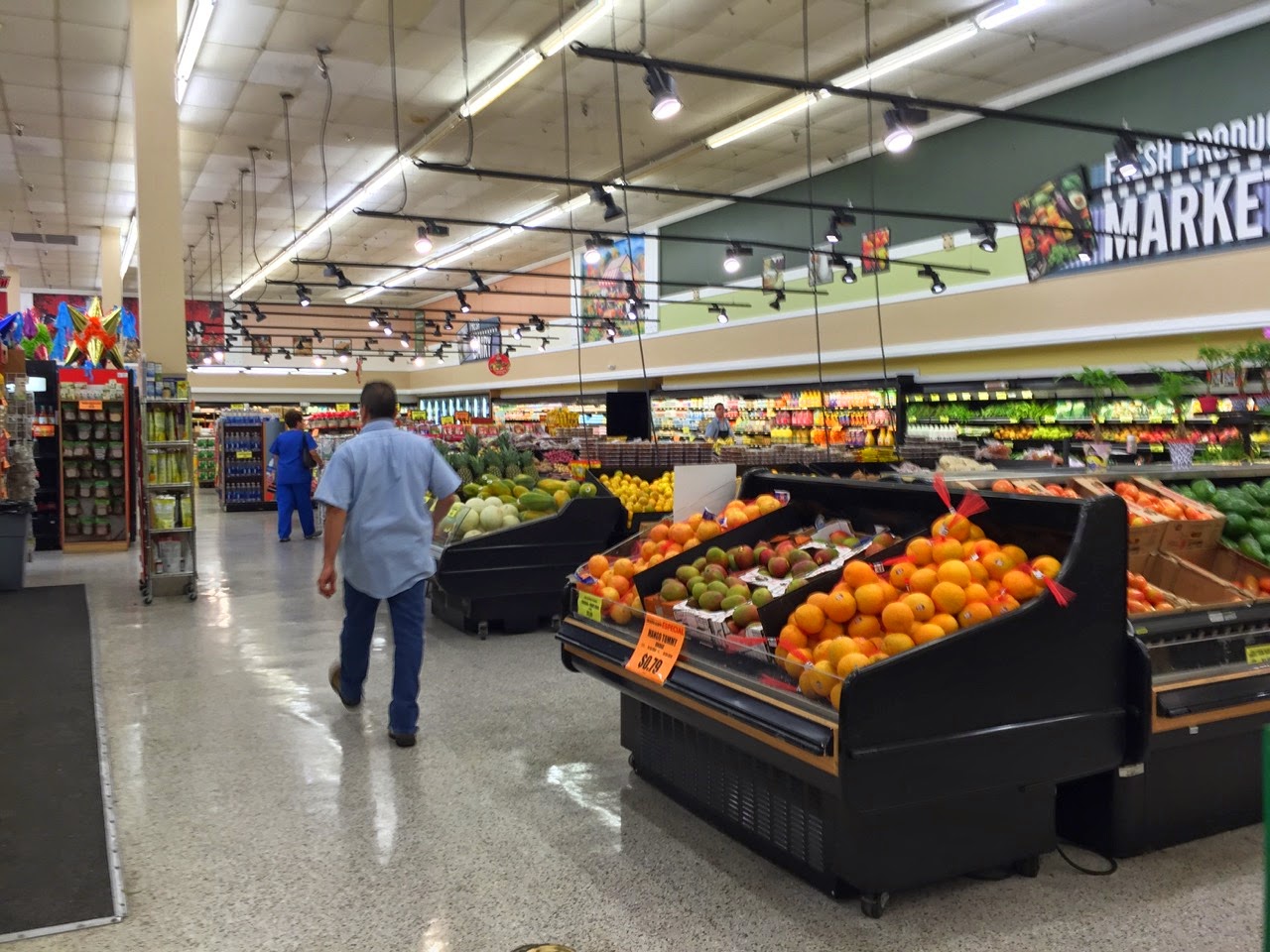 Looking down the right side of the store from the Bakery/Restaurant into the produce department. You can see more of Albertsons' signage here as well. The basic layout from Albertsons has been retained here. 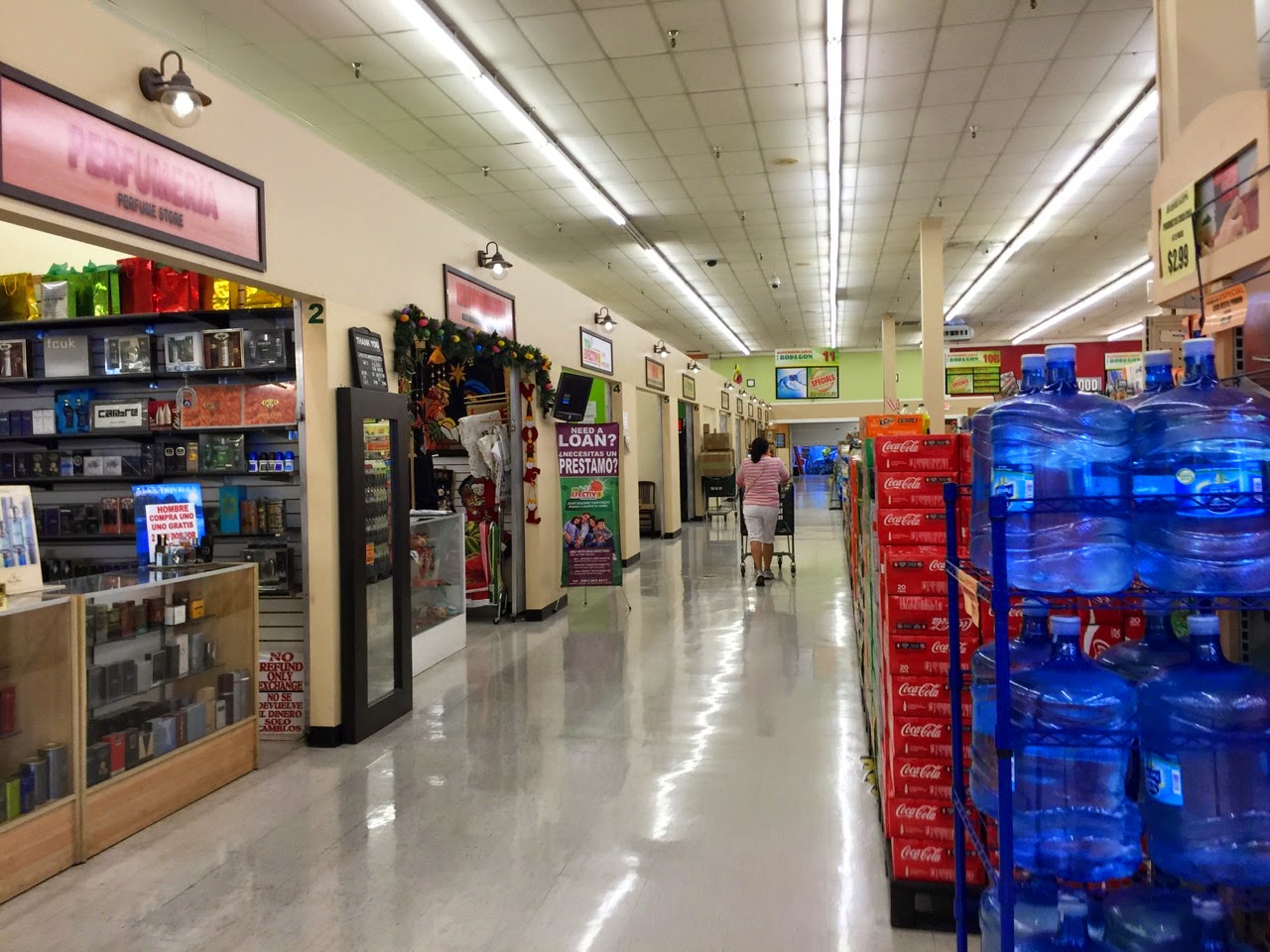 And moving over to the left side of the store, El Bodegon has added a row of small, independently operated storefronts along what was once the Frozen Food wall. This is another feature seen often in Hispanic oriented markets, especially in the Miami area. This store has a much larger selection of storefronts than I've typically seen. 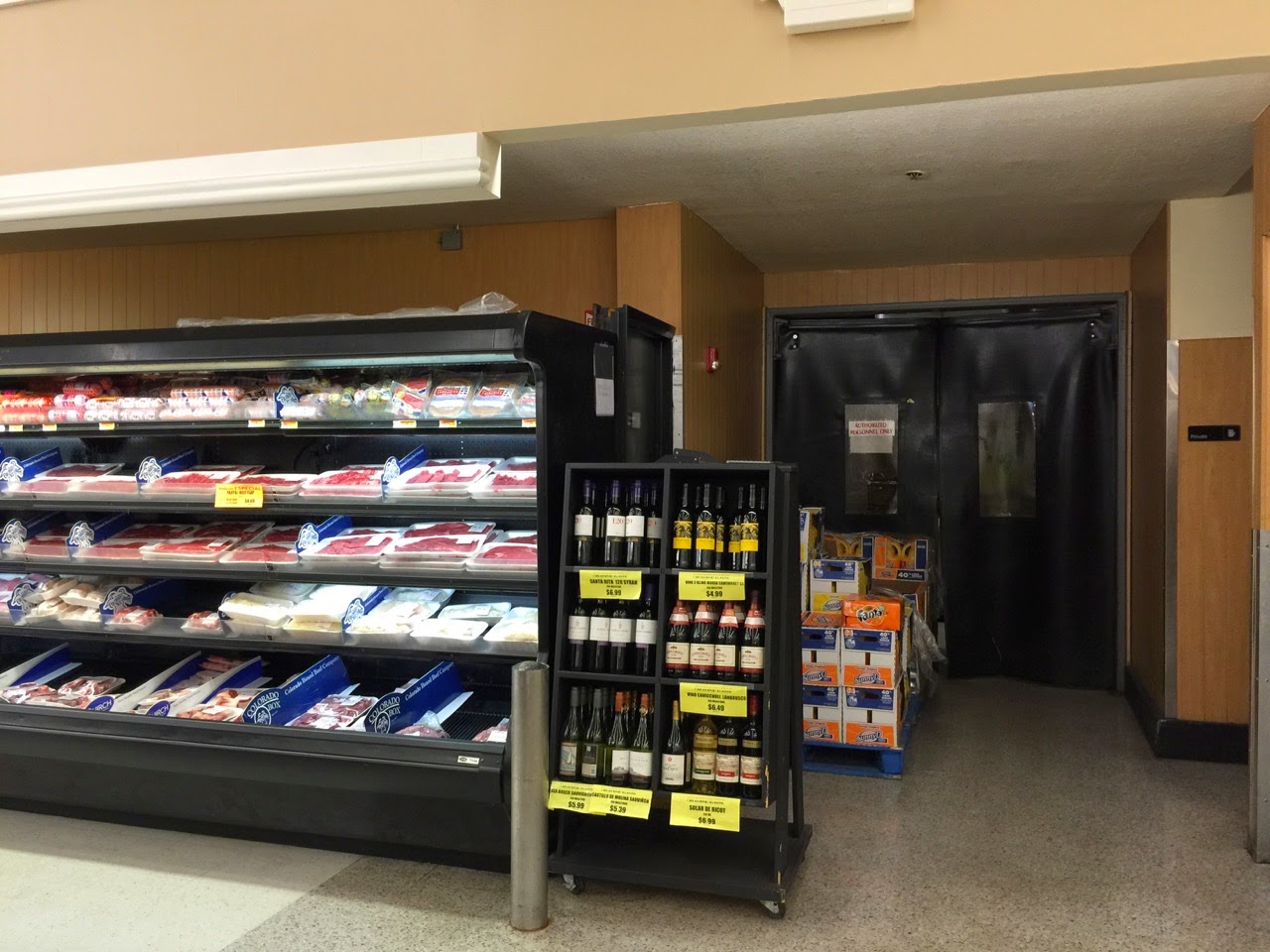 Here in the Meats department in the back of the store, if you look closely at the wall behind the meat cases, you can see some old wood paneling left over from Albertsons, original to 1978, which has since been painted brown. 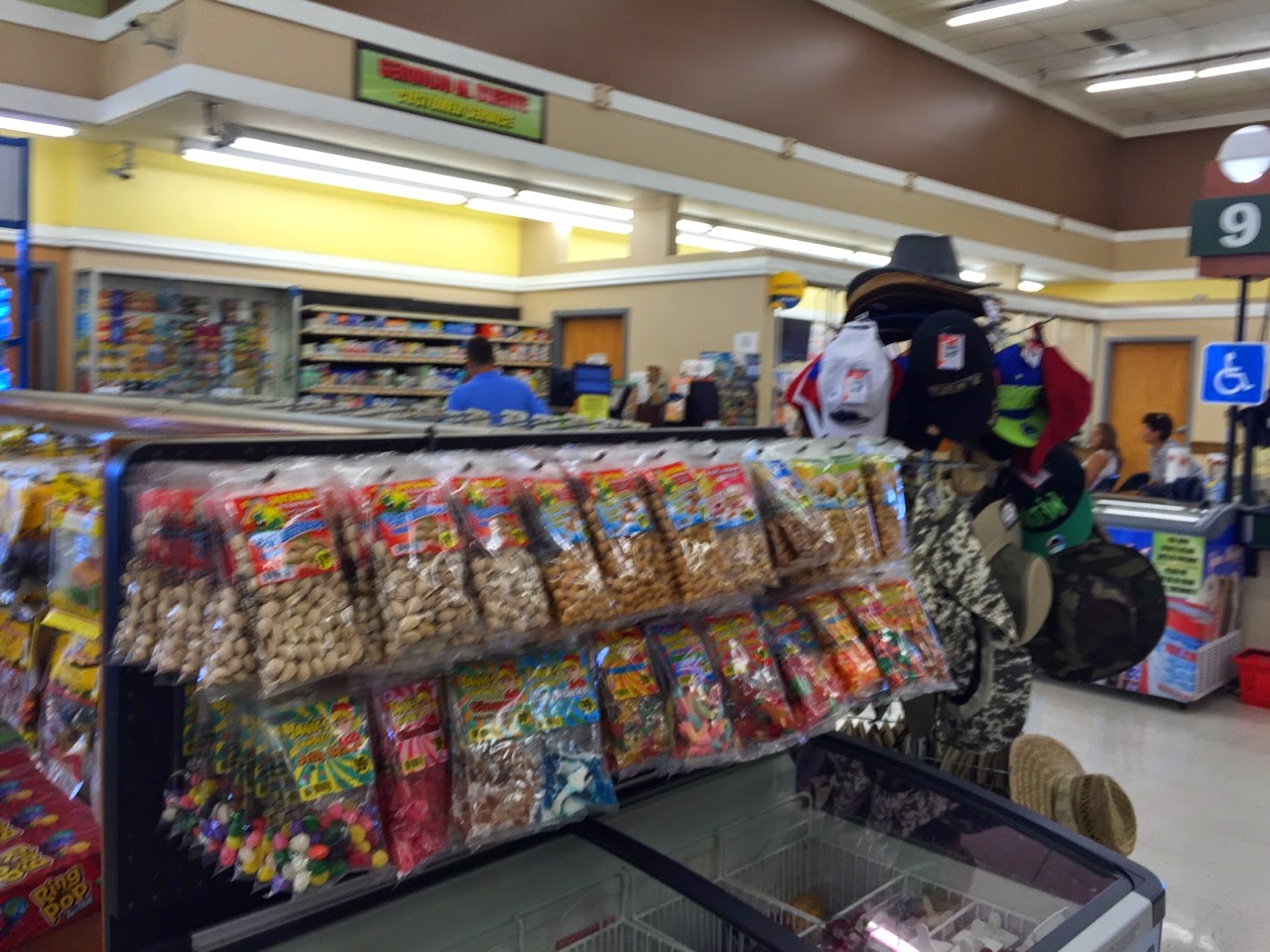 Now back toward the front of the store, the customer service counter (behind the candy rack) is located in the front left corner. 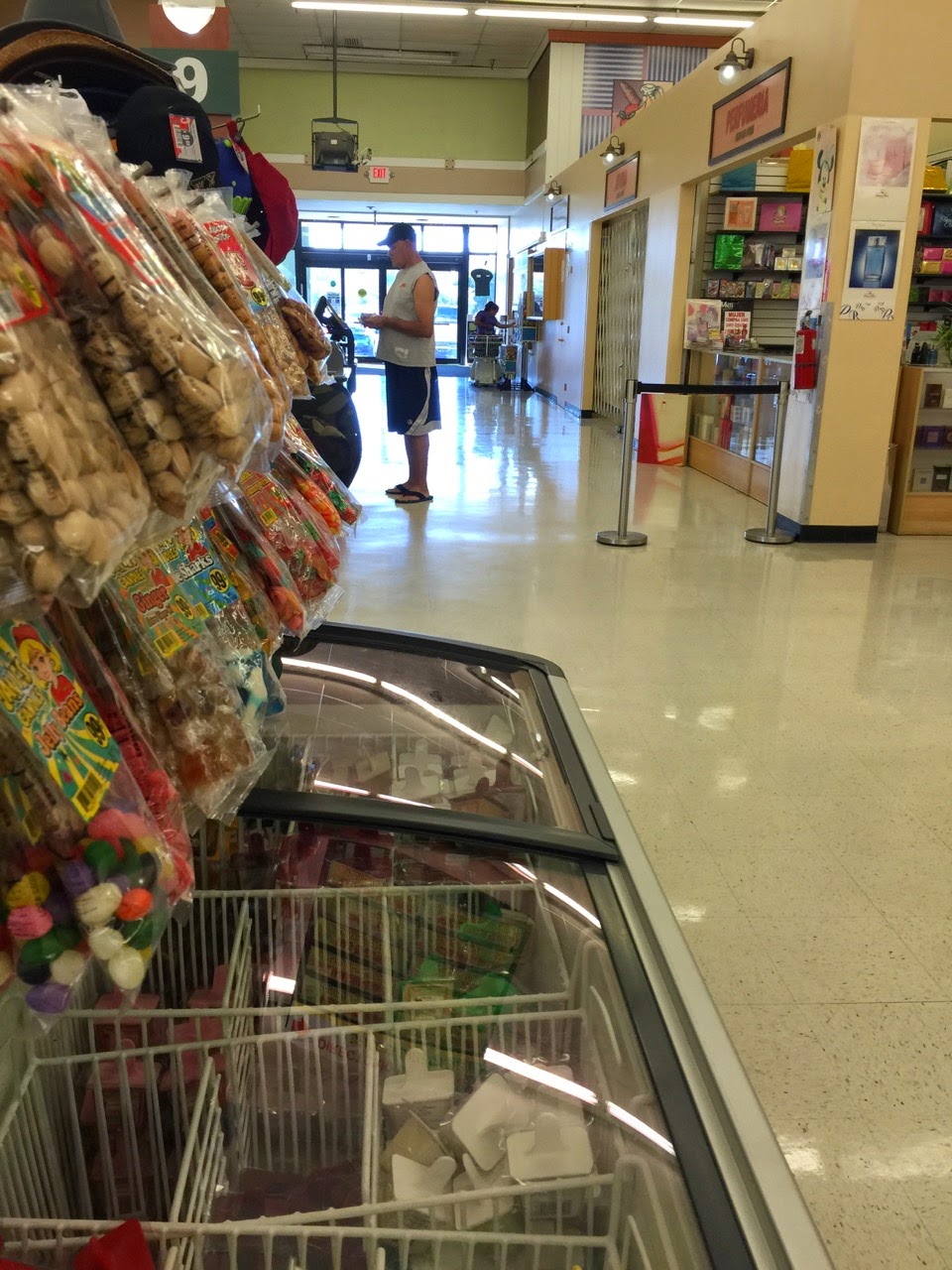 One final interior photo before heading back outside. This is looking toward the side entrance and wall of small shops on the left side of the store. You can see one of Albertsons old wall decorations peeking out from behind the newly constructed shops. 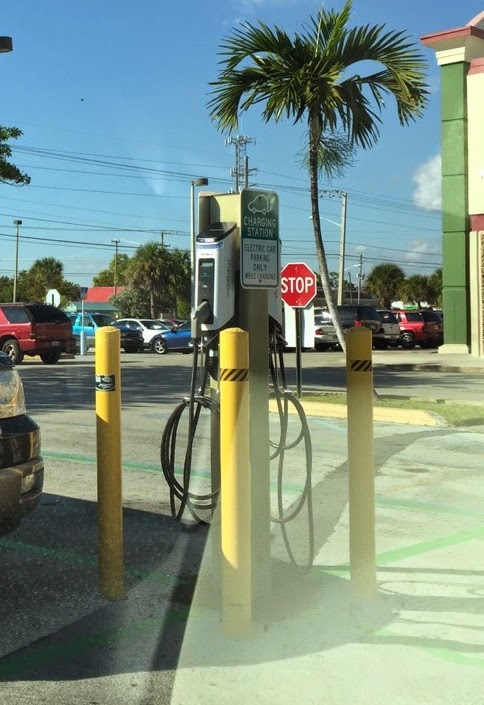 As we head back outside, Graham noticed this electric car hookup in the parking lot. I'd have to assume El Bodegon put this in. I've never seen an Albertsons with one before.

And now on to Bird's Eye aerial images, courtesy of Bing Maps: 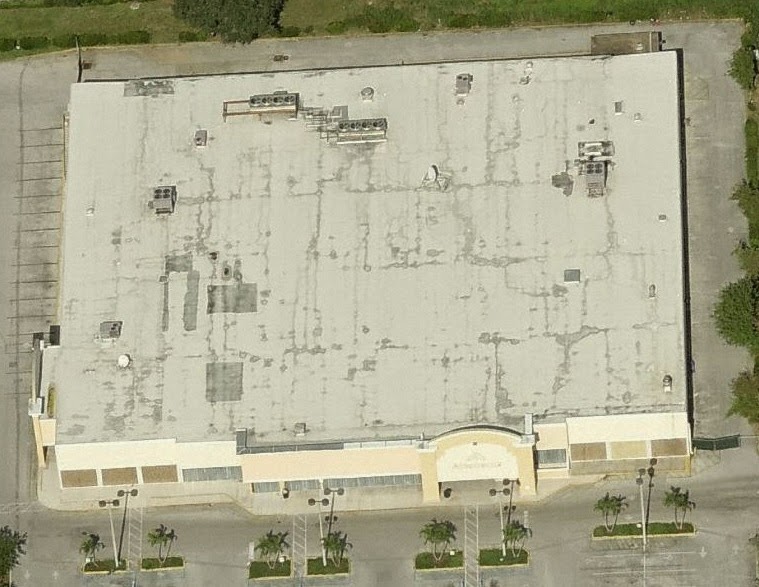 Front - These aerials were taken during the time after Albertsons closed and before El Bodegon opened, which would probably date them back to early 2010. 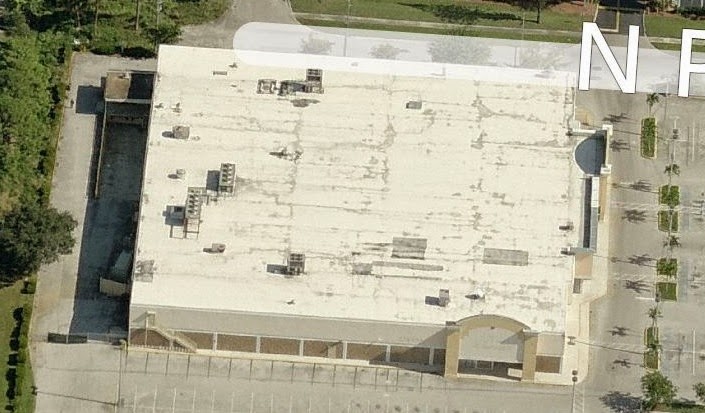 Left Side - The side entrance and the liquor store are to the right side in this image. If you look closely at the left end of the building, you can see some stairs leading up to the backroom's second level door. 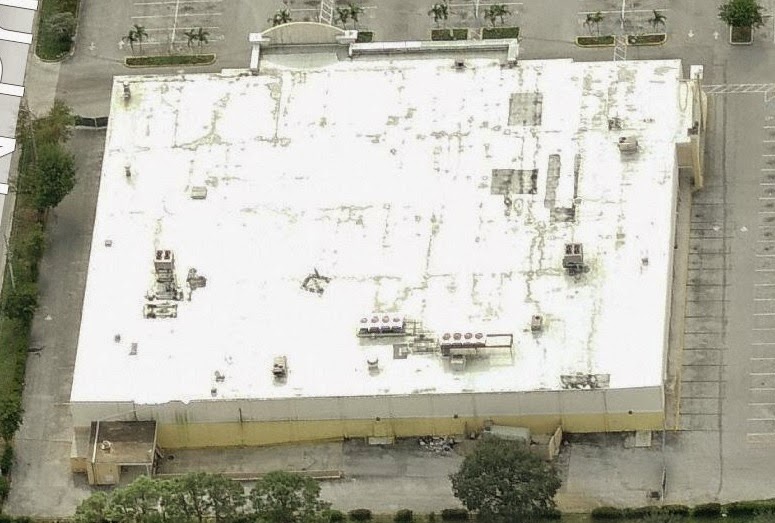 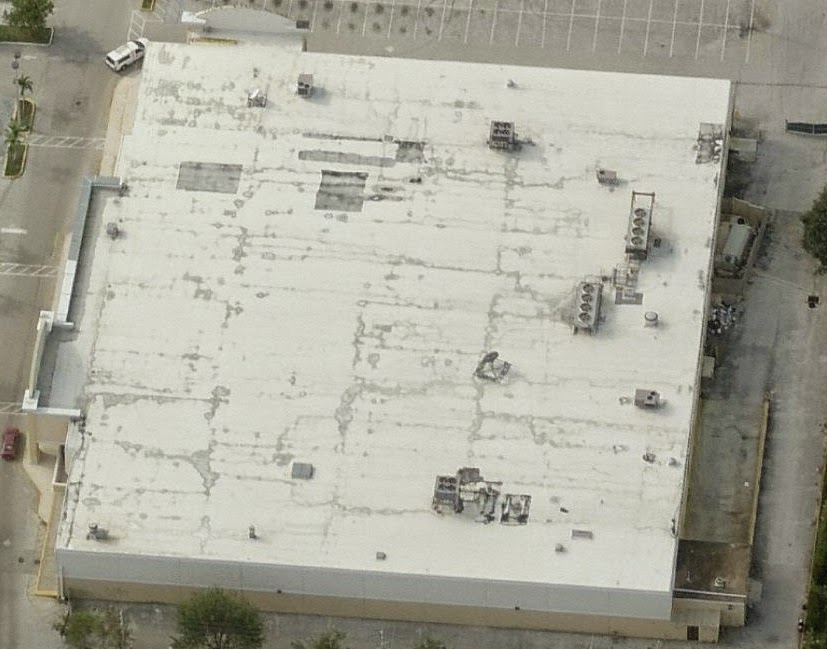 And now for the historic aerial images, courtesy of Google Earth and historicaerials.com: 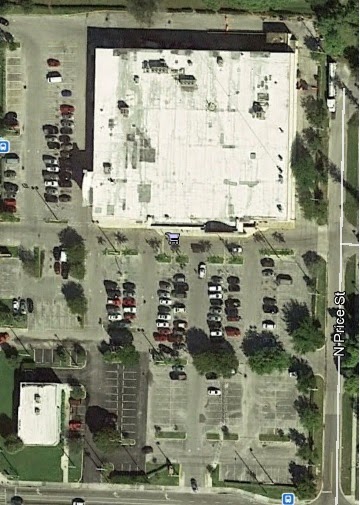 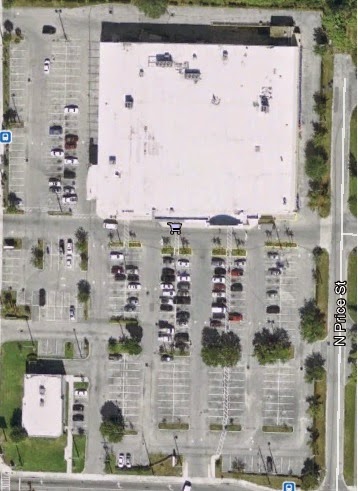 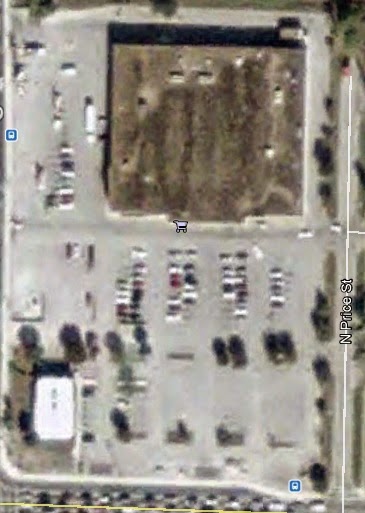 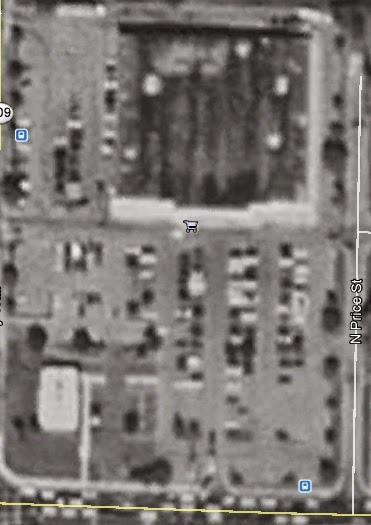 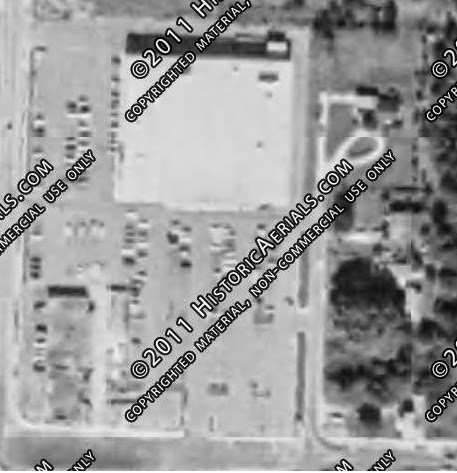 Albertsons #4328 - 1979 - The store not long after opening. Still mostly woods around the store, and some houses on larger sized lots. 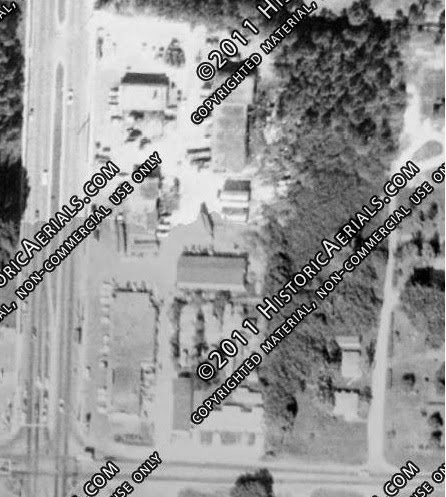 Future Albertsons #4328 - 1968 - Little did the owners of all those small buildings there know that in 10 years, some newfangled supermarket chain would be buying them all out to build a "superstore of the future" on their property.

Before I finish this post off, there's one more thing I'd like to mention. The aerial image above is of the former Albertsons and the neighboring shopping center, Mil-Lake Plaza. The reason I bring this shopping center up is because as I was looking up the satellite images to use in this post of the Albertsons, I spotted something not too common anymore and really interesting over there: 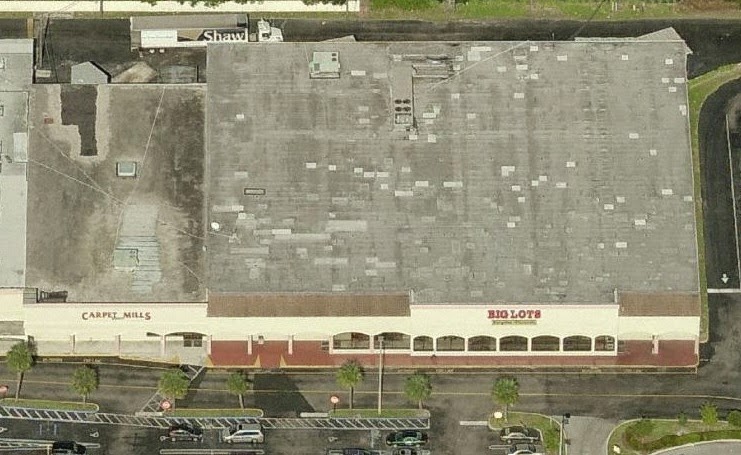 A nearly perfectly preserved former Grand Union! You don't see too many of these in Florida anymore! Most of the ones I've discovered are completely unrecognizable or have since been torn down. This former Grand Union (now the Big Lots in the aerial image above), Store #506, and address 4515 Lake Worth Road, opened in 1982. It only spent two years as a Grand Union before closing in early 1984, when Grand Union pulled out of Florida. Based off the old Big Lots logo, it looks like they moved in not too long after the Grand Union closed. 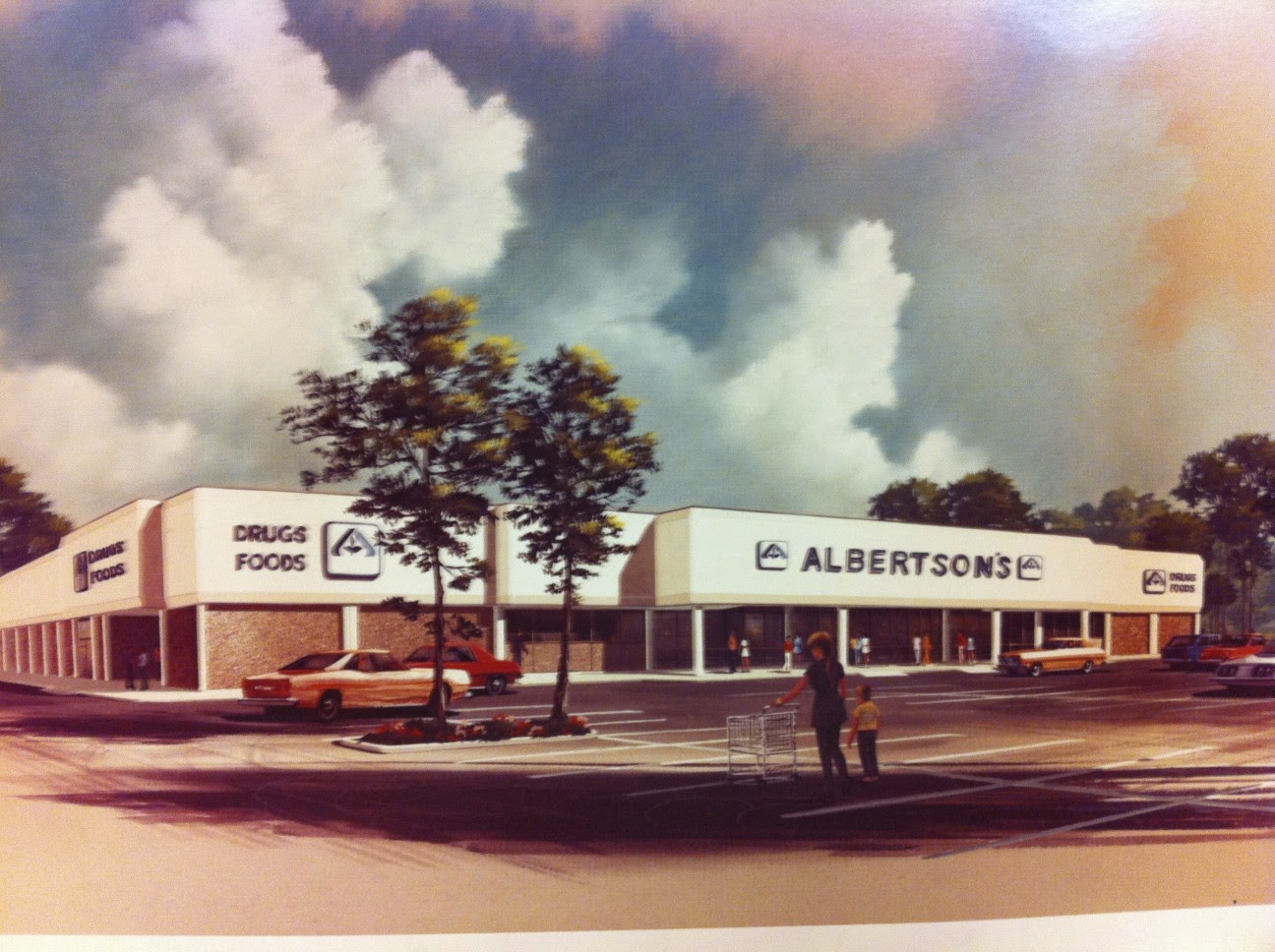 And before we finish off this post, I wanted to end with this awesome color artists' rendering of the former Lake Worth Albertsons that Graham also sent in. These 70's Albertsons stores didn't have much in terms of architectural uniqueness, but they still have more character than most current boring box stores. It's kind of hard to imagine urban Palm Beach County with that many trees in the background these days. Anyway, if you're looking to read up on some more of the old buildings and places from South Florida's past, be sure to click on over to Graham's new blog, Retro Palm Beach. His blog is dedicated to taking a look back at the many commercial buildings that helped shape Palm Beach County (and the rest of South Florida), plus he has lots of awesome classic photos there too! Thanks again for sending in these photos, and remember, everyone is welcome to submit photos of their local/former Florida Albertsons stores and memorabilia.